To some, the rumble sounded like the elevated train that ran nearby. Others recounted feeling the ground shaking beneath them — the buildings and offices where they were at work in the North End rocking on their foundations.

Then the wave of molasses came that crumpled buildings and knocked down the elevated rail, killing 21 people and injuring 150 others.

“Once the low, rumbling sound was heard no one had a chance to escape,” The Boston Globe reported the day of the disaster — Jan. 15, 1919. “The buildings seemed to cringe up as though they were made of pasteboard.”

The storage tank on Commercial Street, containing 2.5 million gallons of molasses, ruptured just after noon, spilling the viscous brown syrup through the streets of the Boston neighborhood at as much as 35 mph. People, horses, vehicles, and even houses were swept up in the flood.

According to the Globe, there was no warning.

Joseph Hiller of Chelsea told the newspaper he was returning to the nearby Bay State freighthouse from lunch when the tragedy struck.

“He said he heard a rumble and saw the big tank open out and fall apart, while the wall of molasses, 50 feet high in the front, rolled out over the ground with a seething, hissing sound,” the Globe wrote.

One man walking on Commercial Street underneath the elevated line was thrown on his hands and face when an explosion occurred — another was thrown from the wagon he was driving, his horse killed.

Three houses in the yard collapsed when the tank ruptured, and two cars, 30 feet from the storage container, were thrown against lamp posts, which in turn were broken down in the crashes.

“A soldier, who was but a short distance from the spot at the time of the explosion, said that he heard no sound of an explosion, but that the big molasses tank simply seemed to collapse,” the Globe reported. “The jar, he said, however, was felt for a distance of about 50 feet.”

Boston police Patrolman Frank McManus told The Boston Post he had just walked away from the tank and was about 100 feet away when he felt a “wet, sticky substance” hit him in the back and shoulders.

“I was at a loss to know what it was at first, thinking it might be mud, but when I turned my head I saw the molasses tank plunge out in the direction of the elevated structure, which buckled over,” he said. “The next second, a wave of molasses swept up the street in my direction, but I beat it out in the race, for I rushed up a side street and escaped except for my uniform, hat and shoes being literally covered with the sticky substance.”

He rushed to the nearest phone and called for help. Then he ran to help pull people from the mess.

“The police, firemen and civilians who were near plunged through the great streams of heavy liquid, eager to give aid as best they could,” the Globe reported. 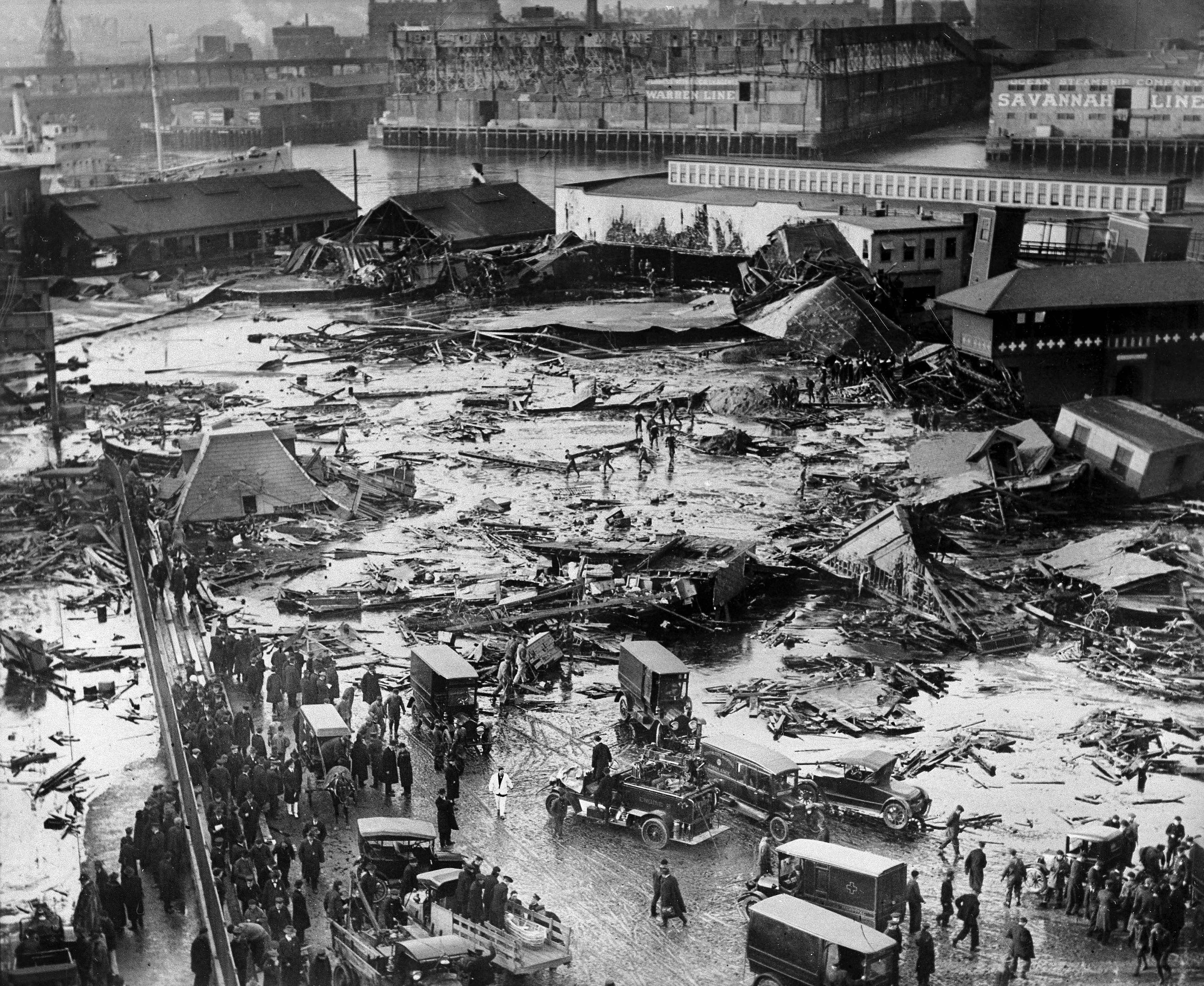 In this Jan. 15, 1919, file photo, the ruins of tanks containing 2.5 million gallons of molasses lie in a heap after an eruption that hurled trucks against buildings and crumpled houses in the North End of Boston.

H.P. Palmer, an accountant at the electric freight plant, told the newspaper he heard the low rumble around 12:30 p.m.

“He looked out of the window, felt the building which he was in rocking, and at a glance saw that something dreadful had happened,” the Globe reported. “Within a minute huge streams of molasses began to run through the various streets and passageways, filing every section for two blocks.”

Martin Clougherty was sleeping at his home at 6 Copps Hill Terrace, which extended along Commercial Street, when the flood occurred. His 65-year-old mother, sister, and brother were also in the house.

The force of the tank’s collapse pulled their building out into the street, smashing it against the elevated rail line. His mother, Bridget Clougherty, was crushed in the wreckage.

“I was in bed on the third floor of my house when I heard a deep rumble,” Martin Clougherty told the Globe. “I was asleep and the rumble did not wake me thoroughly. The first impression I had that something unusual had happened was when I awoke in several feet of molasses. It didn’t dawn on me that it was molasses I was in. I thought I was overboard.”

He was able to find his sister, but couldn’t find either his mother or his brother in the debris. His brother, Stephen, was rescued but later died in an asylum from what the family said was trauma from the flood.

Mary Musco, who lived at 4 Copps Hill Terrace, told the Globe she was standing at her window looking out onto the Clougherty home when the explosion occurred and saw the family’s home “fly into the air.” Her own home “rocked” but otherwise remained intact.

“I knew there were people in the house and I ran into the street and called for help,” she told the newspaper. “Soon sailors and other people came running and I went back into my own house. I was terribly frightened and think I became hysterical. It was awful. I knew those people were killed and I saw people running every way all covered with molasses. They were hollering and crying.” 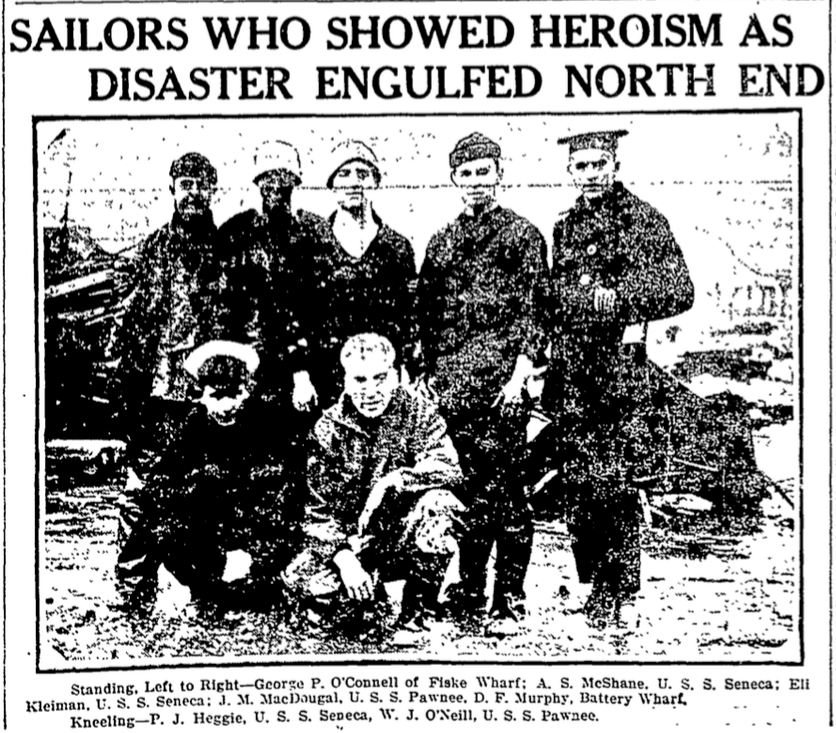 Sailors were among those who rushed to rescue people caught in the deadly flood of molasses.

The wreckage stretched out with a radius of about 200 to 250 feet, according to the Globe, the thick treacle making it difficult to get close to the scene and hampering rescues.

Robert Burnett was eating dinner with his family at 536 Commercial St., which was opposite from the tank and had a view of the elevated rail.

“There was a rumble–no roar or explosion,” he told the Post. “I thought it was an elevated train until I heard a swish as if a wind was rushing. Then it became dark. I looked out the windows and saw this great black wave coming. It didn’t rush. It just rolled slowly, it seemed, like the side of a mountain falling into space. Of course, it came quickly, but we all had a chance to jump and run before the windows began to crack. Then it poured molasses.”

He and his family followed their first impulses to run to the street, but, when they opened the door to the hall of their building, they saw molasses had already reached the top of the 14-step flight of stairs. They ran instead to the roof of the building. 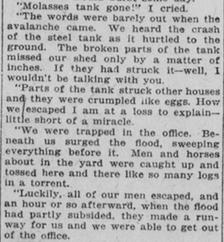 A freight agent at the Boston & Worcester Street Railway Company told the Post his offices were about 10 to 15 feet from the tank. He and his colleagues were working when they felt a rumble and heard the “crash of the tank.”

“The broken parts of the tank missed our shed only by a matter of inches,” H.M. Dorely told the Post. “If they had struck it — well, I wouldn’t be talking with you. Parts of the tank struck other houses and they crumpled like eggs. How we escaped I am at a loss to explain — little short of a miracle.”

B.E. Kingsley, who worked in the Bay State Railway offices nearby, also described hearing a rumble, which he initially mistook for the elevated train. But when he heard it again, he told the Post, he looked out the window.

“Where the tank stood there was no tank,” he told the newspaper. “Instead was a mighty wall of some kind — a giant wave of molasses. And it was sweeping rapidly down upon the office, gaining momentum every second. I turned and ran into the outer office, calling a warning to the clerks there.”

His colleagues had seen the unfolding torrent, too. He told the Post they all went for the door:

“It was too late. A second later, it seemed, there was a crash. Doors and windows were as if they had not existed. The molasses poured in — the wave was 15 feet high when it struck the building — and everything in the office, including myself and the clerks, was toppled over like nine-pins under the weight of the wave.”

He and his colleagues clambered in the mess onto desks and were later rescued.

By 1 p.m. an estimated 100-150 people taken from the wrecked area, according to the Globe.

“[The] shouts and screams of the dying and injured rent the air,” the newspaper wrote. “For the first quarter of an hour pandemonium reigned.”