Exactly 100 years ago this Tuesday, as North End workers and residents took their lunch breaks, Boston endured one of the city’s most deadly — and perhaps one of the country’s most curious — disasters, when a massive tank of molasses gave way.

“People’s initial reaction is usually to laugh because it sounds so ridiculous, and then to be curious because it sounds so surreal,” says Nicole Sharp, a Denver-based engineer specializing in fluid dynamics who has studied the disaster. “And then, by the time you get into the nitty-gritty details, it’s like, ‘Man, that would be a terrible way to die.'”

Despite its mystifying nature and impactful legacy, the seemingly incredible disaster is not widely known outside Boston. Sharp says she often gets peppered with questions about the Great Molasses Flood, as it’s become known.

Here’s what you need to know about five of the most commonly asked questions (and myths) around the strange and tragic event.

So what was all that molasses doing in the heart of Boston in the first place?

Far from it, Purity was using the massive tank to store the molasses to be fermented into ethanol for industrial uses. The company built the giant tank on the North End’s waterfront — at what’s now baseball fields at Langone Park — to store molasses from the Caribbean until it was shipped across the river to their fermentation facility in Cambridge.

“At the time, [ethanol] was used, among other things, as a major ingredient in making munitions, which starts to explain why they built this tank in December 1915,” Sharp said. “They were getting a ton of orders from companies that were building munitions that were being shipped to Europe for World War I.”

However, the war ended in November 1918. Come January 1919, the giant tank — which was 50 feet high and 90 feet in diameter — was still nearly full to the brim with 2.3 million gallons of molasses. Sharp says they had even received a big new shipment two days before the tank burst.

That’s because while ethanol buyers were retooling their factories for peacetime operations, Purity decided to ferment their molasses into rum and sell it before Prohibition, which was about to be ratified by the states and enacted the following January in 1920.

“This was like a stopgap measure,” Sharp said. “They were going to be rumrunners.” 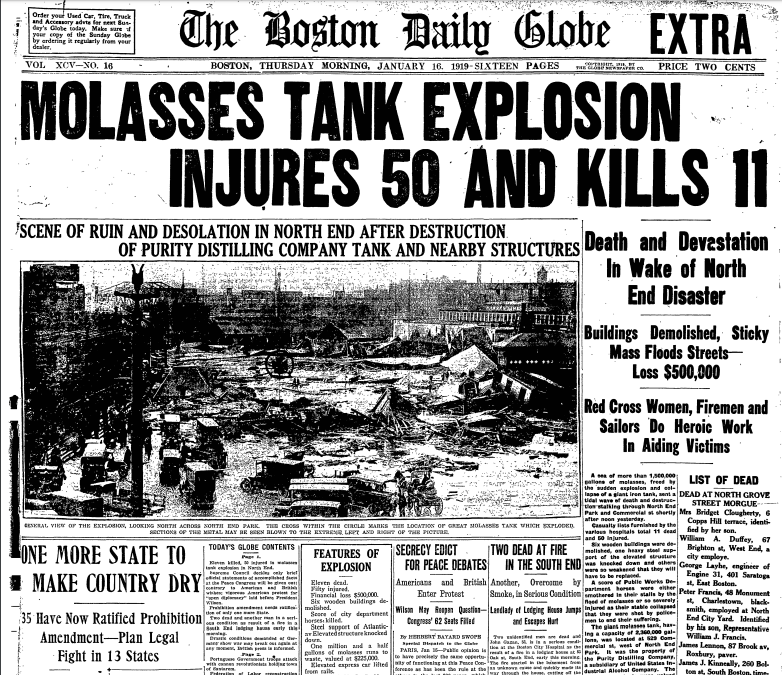 The front page of The Boston Globe the day after the Jan. 15 disaster also noted that Prohibition was nearing ratification by the states.

What caused the tank to burst?

According to Sharp, the tank was filled within inches of the top with molasses at the time of the incident. But overfilling wasn’t the reason it burst.

The consensus cause — both according to an auditor who later ruled against Purity in a class-action lawsuit and structural engineers who studied the case nearly a century later — was that the tank itself was insufficiently built.

Not only was the steel too thin (even below the standards of the time), but its chemical composition also made the tank brittle and prone to cracks, as The Boston Globe reported in 2015.

“It was leaking from day one,” Stephen Puleo, the author of the most definitive molasses flood book, “Dark Tide,” told the Globe. “Every time it was filled, it groaned and shuddered.”

According to Puleo, the building of the tank was rushed and the structure never received an inspection. After residents began pointing out the leaks, the company reportedly painted the tank a dark red-brown color in an apparent — and unsuccessful — attempt to camouflage the cracks.

Sharp says the stresses of temperature change, as well as “the changing value of stress when you’re pumping molasses in and out,” continued to weaken the material. And apparently the last shipment filling the tank up with 48 feet and 9 inches of molasses was the last straw.

Was it an explosion?

Many of the early reports at the time told of a dramatic molasses “explosion,” which Sharp says is somewhat of a misconception.

Sharp says “burst,” “rupture,” and “collapse” are more accurate, according to her research.

Once one of the cracks gave way, the tank “basically just tore itself apart,” she said.

In his 2003 book, Puleo wrote that one witness, Boston police officer Frank McManus, recalled a “machine-gun-like rat-tat-tat sound and an unhealthy grinding and scraping.” McManus turned to see the molasses tank seem “to disintegrate before his eyes, disgorging an enormous wall of thick, dark liquid that blackened the sky and snuffed out the daylight.” 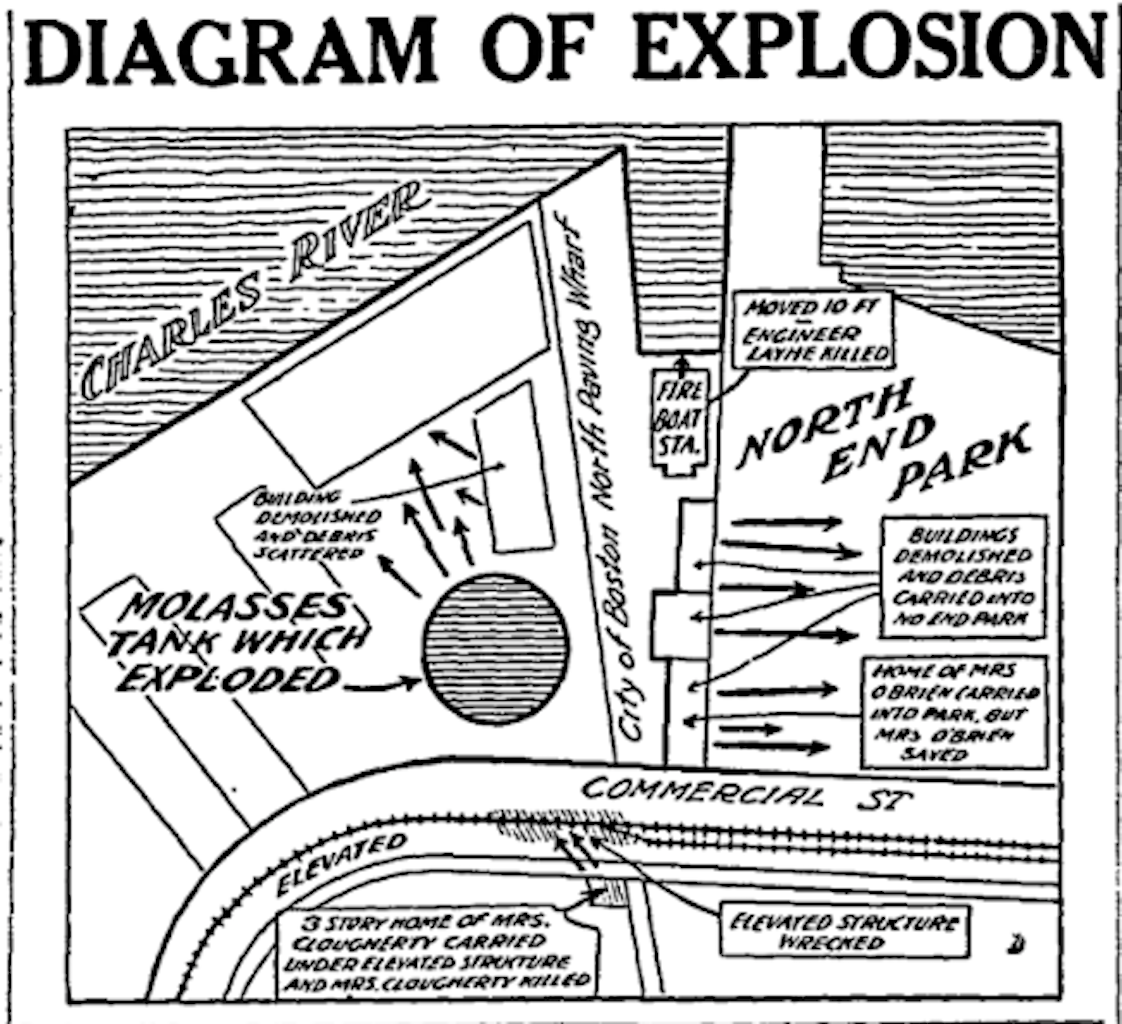 While the molasses may not have actually blacked out the sun, Sharp says it can be difficult to conceptualize the sheer enormity of the wave.

The 2.3 million gallons of molasses that were in the tank is enough to fill three Olympic-sized swimming pools. When the tank ruptured, the wave smothered the surrounding two blocks — demolishing buildings, dislodging the elevated rail trestle that ran down Commercial Street, and sweeping bystanders into the harbor.

Estimates said the wave was 15 to 40 feet high. The Boston Post even reported a 50-foot wave at the time. But Sharp says it was likely more toward the low end of the range of estimates.

“It was presumably changing as it was moving,” she said, noting that photos of the aftermath showed molasses splattered on the second floor windows of nearby buildings hit by the wave.

“So it was not high enough when it hit those buildings to break those windows, but it was high enough to be splattering up against them,” Sharp said (the fact that the windows weren’t shattered was also used as evidence to disprove Purity’s attempt to later argue in court that Italian anarchists were actually to blame for the disaster).

The smothering wall reportedly moved at about 50 feet per second — or 35 mph.

Sharp says she ran the numbers for “non-molasses situations that are physically equivalent” over several different models and found the results to be consistent with that terrifying speed.

She also noted that the technical term for the wave of molasses is a “gravity current,” which — like an avalanche or lava flow — consists of a dense flow (molasses) moving into a less dense flow (air). And in this case doing so at a rate of up to 35 mph.

So much for the saying, “Slow as molasses in January.”

Why was it so deadly?

One fireman who witnessed the wave recalled that it looked like “‘boiling oil,” but the relative heat of the molasses — at least initially — wasn’t the reason it killed people. Sharp says the molasses in the tank would have been about the same temperature as the 40-degree air outside, if slightly warmer due to the recent refilling.

“So it’s not hot molasses,” she said. “But it’s not necessarily super cold.”

Sharp says there were two main ways that the 21 victims of the flood were killed.

The first are those who died as a result of injuries that occurred when it initially hit, whether crushed by fallen buildings or hit by wagons and other debris. Some survived the initial minutes, only to later die at the Haymarket relief station where dozens of victims were taken. One victim also died after being swept into the harbor.

The other category are those who essentially asphyxiated or drowned in the molasses.

In 2016, Sharp led a Harvard research project that found the cooling winter air thickened the molasses as the day went on, “complicating attempts to rescue victims” and making it more difficult for those pinned down by debris to escape.

“Molasses changes its viscosity, or its resistance to flowing, with temperature very strongly,” Sharp told Boston.com, adding that the wave quickly began to cool and harden as it spread out.

“As that molasses gets colder and harder to move, it’s harder and harder for rescue workers to get this molasses-covered stuff off of people who need to be rescued,” she explained. “Meanwhile, that person who’s stuck is maybe pinned down and constantly having to move the molasses away from their mouth and nose so they can keep breathing.”

The paperback edition of “Dark Tide” included a letter written by 17-year-old marine merchant Cameron Burnap, who recalled wading around in several feet of molasses after the flood, trying to pull survivors and bodies out of the mess.

“It was impossible to get up without help because the molasses was so thick and it acted like quicksand,” Burnap wrote.

A Post reporter at the time reported that the molasses on the street, at least initially, was “waist-deep” in some places and killed horses like flies on fly paper. Burnap wrote that rescuers used axes and crowbars to get to victims pinned by mangled wreckage in the molasses, sometimes only to uncover severed limbs.

“It was pretty bad when you get into the gruesome details,” Sharp said. 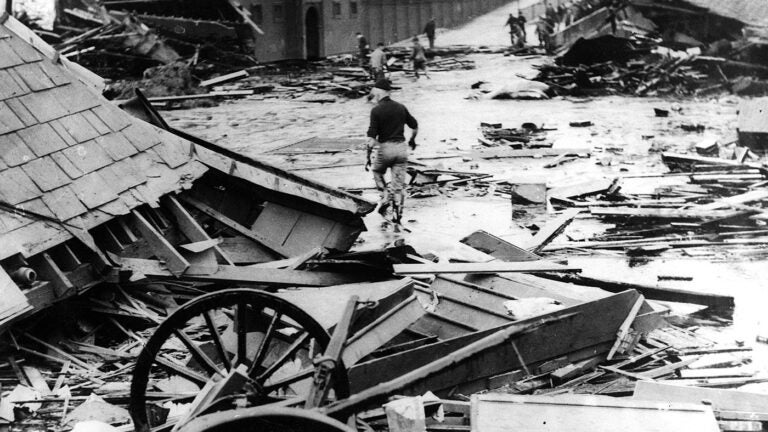