When a 50-foot-tall storage tank ruptured and poured millions of gallons of molasses onto the streets of Boston’s North End 100 years ago this Tuesday, the utter destruction of the catastrophe cemented the tragedy as one of the nation’s most bizarre and uncanny disasters in history.

While the Jan. 15, 1919, event — which killed 21 people and injured about 150 — is captivating in its most basic facts alone, there’s quite a bit more peculiarity, and significance, that goes beyond the surface.

From the truth shrouded in urban folklore to the ramifications of the flood that stuck on through the century since, here’s what Puleo told Boston.com surprised and jumped out to him as he researched for his book:

“I’d say all the major events that America is dealing with at this time quite literally touch this story,” Puleo said.

Take, for example, the molasses itself.

The 2.5-million-gallon storage tank perched above Commercial Street belonged to United States Industrial Alcohol (USIA) — which bought out the Massachusetts-based Purity Distilling Company, and its tank, about a year before and made significant business during World War I.

Up until the fighting stopped and the armistice finalized two months before the massive flood, USIA was cranking out industrial alcohol for domestic munition manufacturers, the French and British governments, and later, starting in 1917, for the United States government, according to Puleo.

“About 90 percent of the molasses that was stored in that tank was processed and distilled into industrial alcohol and then further processed and used in the production of TNT, nitroglycerin, high explosives for the war effort,” he said.

Anarchism saw an upswell in activity across the globe in the early 1900s, and its threat was real — even in Boston.

In 1916, anarchists blew up a police station on Salutation Street in the North End, a neighborhood that had become the national Italian anarchist movement’s “de facto headquarters,” Puleo said.

In the months and years after the molasses flood, city and government officials were targeted with bomb attacks — some successful, some not — across the country, including in September 1920, when anarchists set off an explosion in New York City that killed 42 people outside of the J.P. Morgan and Co. offices, according to Puleo.

With the national fervor, USIA tried to peg the anarchist movement to the tank rupture while in court the following year.

“USIA makes as the cornerstone of its defense in the big civil lawsuit that follows (the flood) that an anarchist dropped a bomb into the tank and that’s what caused the explosion, the disaster, and that they should be absolved of all liability,” Puleo said.

Unlike the molasses, the argument didn’t stick.

At the time of the flood, the North End has about 40,000 residents, crammed into a small neighborhood that’s home to mainly Italian immigrants, Puleo said.

Most were not U.S. citizens — a lengthy process for native born Italians at the time — and also therefore could not vote, he said.

They were without local influence — and without a voice.

“So when the tank is plunked down on the waterfront, there’s barely a whimper, not only from the neighborhood, but from the Boston political hierarchy,” Puleo said. “Even when it starts leaking from day one, big huge leaks right down the side of that 50 foot tank, barely a mention from anybody of any influence, and, quite frankly, even after the disaster, there’s about two days of outrage … and then that almost goes away.”

Although newspaper reports at the time mention in great detail the wave of molasses that blasted over the street and overhead rail lines, the rush didn’t exactly engulf the entire city the way modern folklore speculates.

But there is some truth to the fact that molasses got just about everywhere in the Hub, Puleo said.

It was on subways, and in pay phones, and even in the troughs provided curbside to the city’s horses, he said.

While the distinct smell of molasses no longer graces the air above the North End, that wasn’t always the case.

For years, decades even, reports swirled about the scent of molasses wafting through the neighborhood’s streets on hot days.

Puleo said a former meter reader for the Boston Gas Company once told him he could still smell it lingering in basements while on the job in the late 1950s and early 1960s.

“If you think about it, those buildings were filled with molasses and pumped out all the way up to the first floor basically, so it kind of makes sense,” he said.

The tragedy had a lasting impact on regulations

As the USIA court case plays out, the United States experiences a financial boom in the roaring 1920s.

While the economy flourishes across industries, a judge ultimately rules against USIA in September 1925, “really the first major decision against a United States corporation,” Puleo said.

The decision is essentially at the forefront of an era of regulation to come as the country tries to balance big business success with public and employee safety, he said.

“Everything that we take for granted today in the way of building construction standards, that architects need to show their work, that engineers need to sign and seal their plans, that building inspectors need to come out and inspect projects …. are a direct outgrowth of the molasses flood case,” Puleo said.

He often compares that impact with how laws involving fire codes swept in following the 1942 Cocoanut Grove nightclub blaze in Boston that killed 492 people.

“I think those two Boston disasters, if there’s one silver lining that comes out of it, those regulations did get changed in both of those cases,” Puleo said.

Stephen Puleo will discuss his book, “Dark Tide: The Great Boston Molasses Flood of 1919,” at the Boston Public Library in Copley Square at 6 p.m. on Tuesday, Jan. 15. 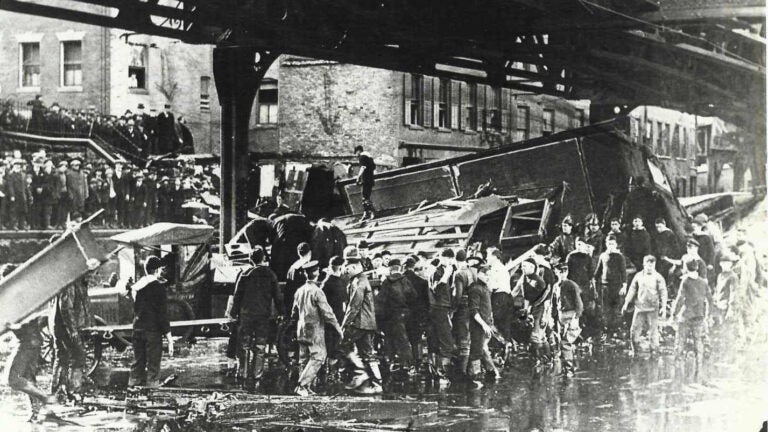