WASHINGTON – It had been eight years since Jacqueline Kennedy Onassis left the White House, eight years since black bunting had hung from the East Room windows and her husband’s body rested on the same bier that had held Abraham Lincoln’s.

Much had changed since President John F. Kennedy had been shot to death beside her in Dallas in 1963 and she had returned to Washington in her bloodstained clothes.

Even so, “the thought of seeing the White House again” was painful, she wrote first lady Pat Nixon in January 1970. “I have returned to Washington only to visit Arlington,” the national cemetery where her husband was buried.

“I know that time will make things easier,” she wrote. “And that one day, when they and I are older, I must take Caroline and John back to the places where they lived with their father. But that won’t be for a while.”

A year later, however, she thought she was ready, and proposed a secret plan.

On Feb. 3, 1971 — 50 years ago Wednesday — Jackie and the children slipped into the White House, almost unnoticed, for her first and only visit there after the assassination of her husband.

It was a day marked by grace and tenderness, as Jackie put it later, between two rival political families that seems unimaginable today.

And it is chronicled in a poignant exchange of the first ladies’ letters, which are held at the presidential libraries of Richard M. Nixon, in Yorba Linda, Calif., and of John F. Kennedy, in Boston.

Still, she was fearful of returning. She had been invited by Pat Nixon to attend a small ceremony to mark the hanging of the formal White House portraits of President Kennedy and Jackie, painted by the artist Aaron Shikler.

“As you know, the thought of returning to the White House is difficult for me,” she repeated in a handwritten letter to Pat Nixon on Jan. 27, 1971.

“I really do not have the courage to go through an official ceremony, and bring the children back to the only home they both knew with their father … With all the press and everything, things I try to avoid in their little lives,” she wrote.

Caroline was 5 and John was 2 when their father was assassinated by Lee Harvey Oswald on Nov. 22, 1963.

“I know the experience would be hard on them and not leave them with the memories of the White House I would like them to have,” she wrote, numbering the pages, on stationery of 1040 Fifth Avenue, the luxury Manhattan apartment building where she lived.

But Jackie suggested a less public plan — “an alternate solution,” she called it.

The portraits would go on view publicly. She would send Pat Nixon a statement of thanks.

Then, “perhaps any day before or after, at your convenience, could the children and I slip in unobtrusively to Washington, and come to pay our respects to you and to see the pictures privately?” she asked.

Pat Nixon wouldn’t have to hold a big ceremony, “and the children could see their father’s portrait in the rooms they used to know, in a quiet way,” she wrote.

The two women could not have been from more different backgrounds. Pat Nixon was born in a Nevada mining town and grew up on a farm outside Los Angeles, according to Nixon scholar Bob Bostock.

She took over household duties after her mother, an immigrant from Germany, died when Pat was 12.

Jacqueline Lee Bouvier was born in exclusive Southampton, on Long Island, the daughter of a Wall Street stockbroker. She attended private schools, Vassar College and had studied in France.

But both had shared in the rising political fortunes of their husbands. And the two families had remained close despite Kennedy’s narrow victory in 1960, according to Bostock, who was an aide to Richard Nixon in the last years of his life.

The former vice president under Dwight D. Eisenhower, then living in New York City, had written to Jackie the day after the assassination:

“While the hand of fate made Jack and me political opponents I always cherished the fact that we were personal friends from the time we came to Congress together in 1947 … [and] you brought to the White House charm, beauty and elegance … and the mistique of the young at heart.”

She wrote back: “You two young men — colleagues in Congress — adversaries in 1960 — and now look what has happened — Whoever thought such a hideous thing could happen in this country … We never value life enough when we have it.”

Now the Nixons sent a special jet to pick up Jackie and the children.

“My mother was determined that the visit be as private and as happy as possible,” Nixon daughter Julie Nixon Eisenhower wrote in a biography of her mother, “Pat Nixon: The Untold Story.”

“Only four members of the White House staff … [were] directly involved … and they were sworn to strict secrecy,” wrote Julie, who was 22 in 1971. “My mother, Tricia [elder Nixon daughter Patricia Nixon Cox] and I were waiting at the second floor elevator when the three visitors arrived.”

Jackie wore “a simple but elegant long sleeved black dress,” Julie remembered. “Her face with its large, wide-set eyes and pale skin framed by dark hair was exactly like the photographs.”

“We went immediately to the ground floor to see her portrait, an ethereal, romantic study with her head turned dreamily to the unknown,” she wrote.

The portrait shows Jackie in golden light wearing a long, thin dress with a ruffled collar and sleeves. She stands before a mantelpiece on which is a bust and a lush bouquet of white flowers.

Shikler had finished the painting the year before, according to the White House Historical Association.

The group then went to view the JFK painting. The Nixons had worried about this moment.

“When we went to the grand hall to see the portrait of John Kennedy, Mrs. Onassis said nothing, except to thank Mother for displaying it so prominently,” Julie wrote.

The portrait showed JFK with his head “sunk deeply on his chest, his arms crossed, conveying dejection more than the sense of tragedy that the artist perhaps intended,” she wrote.

Shikler, who had seen Kennedy only once, from a distance, had painted the portrait posthumously, working from photographs and advice from Jackie. He had just finished it the previous November.

“I painted him with his head bowed, not because I think of him as a martyr, but because I wanted to show him as a president who was a thinker,” he told The Washington Post in February 1971. “A thinking president is a rare thing.”

The Kennedy children said they liked it, but wanted to see what was next on the tour.

President Nixon later took the children to see the Lincoln Bedroom and explained the legend that anyone who sat on the bed and made a wish would have the wish come true.

Jackie had famously restored and redecorated the White House a decade before, and had given a televised tour of the finished work, which was watched by 80 million viewers.

Jackie and the children had dinner that night with the Nixons, then went to the Oval Office. President Nixon showed John Jr. where he was photographed as a toddler playing under JFK’s desk.

“It seemed to Tricia and me to be a private moment,” Julie remembered. They waited outside.

The day after the visit, Jackie wrote to President Nixon and the first lady.

“Never have I seen such magnanimity and such tenderness,” she wrote.

“Can you imagine the gift you gave me?” she said. “To return to the White House privately with my little ones while they are still young enough to rediscover their childhood — with you both as guides — and with your daughters, such extraordinary young women.”

“I have never seen the White House look so beautiful,” she wrote. “It was moving, when we left, to see that great House illuminated, with the fountains playing.”

“It made me happy to hear the children bursting with reminiscences all the way home,” she wrote.

“Thank you with all my heart. A day I always dreaded turned out to be one of the most precious ones I have spent with my children.”

“May God bless you all, 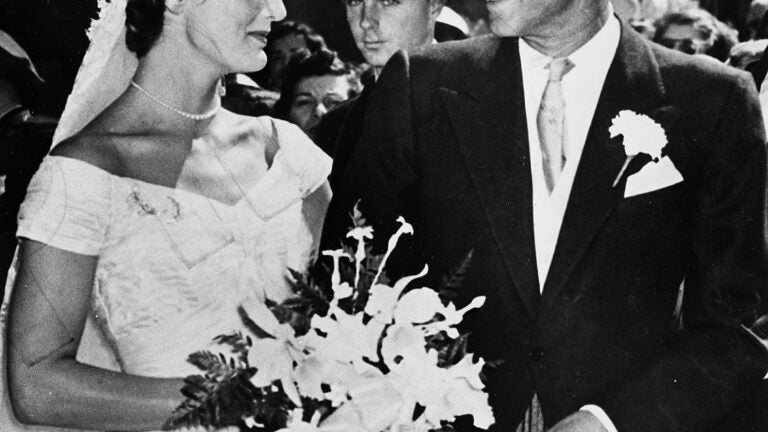