Valentine’s Day, 1978. If love was in the air, it was hard to tell with all the snow on the ground.

After the infamous Blizzard of ’78 slammed Massachusetts with over 27 inches of snow earlier that month, Governor Michael Dukakis enforced a weeklong driving ban. It was a troublesome scene for suitors looking to woo a crush with a last minute gift.

So on the 13th, Dukakis called to extend Valentine’s Day from Tuesday until the end of the week, according to a front page story in The Boston Globe the next day. The holiday was now four days long, at least in spirit, giving couples ample time to celebrate their relationships. The governor made sure to participate; Time reported that he sent valentines to his wife Kitty all week. 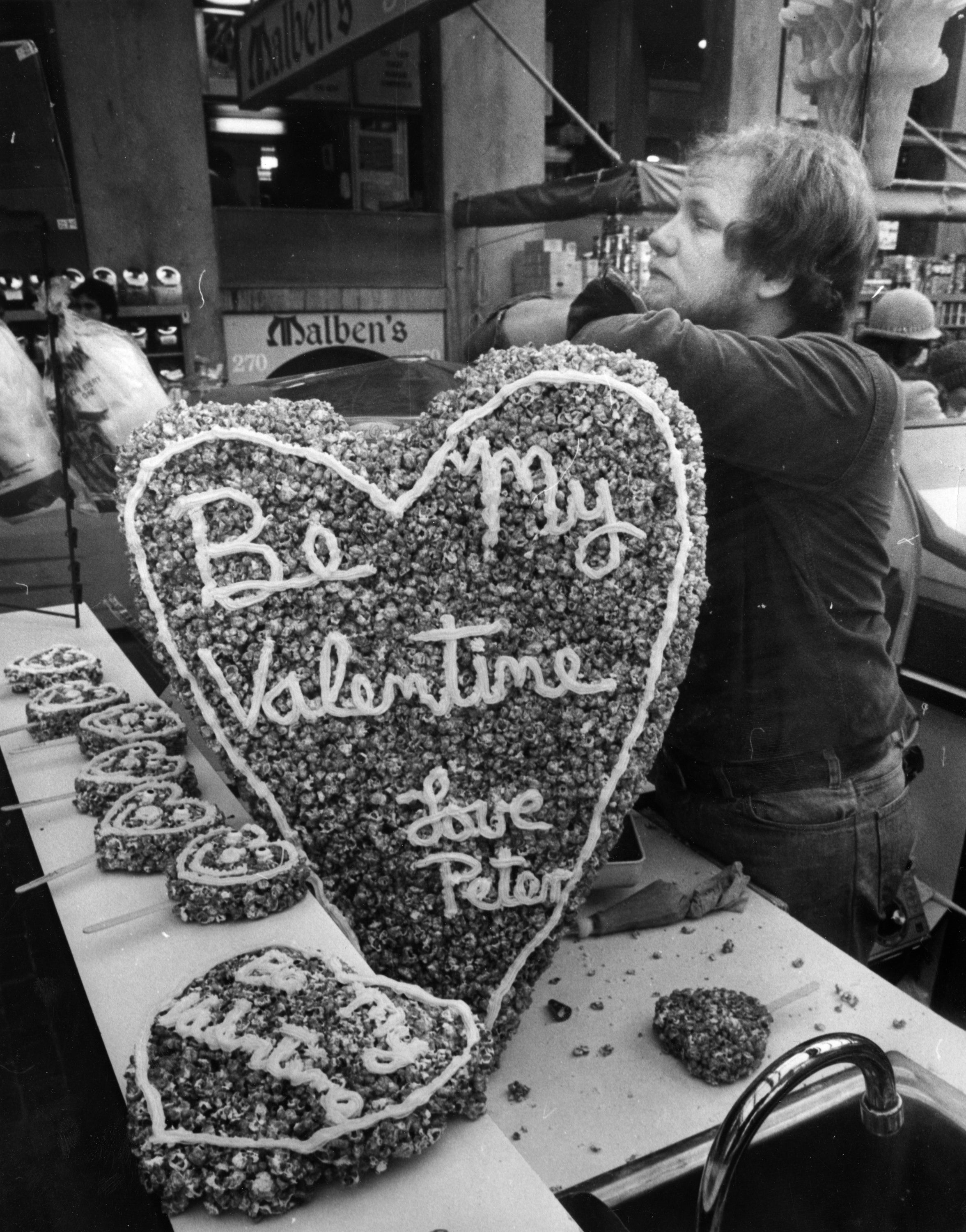 Dukakis’s order wasn’t only to give lovebirds another chance to whisper sweet nothings to each other; he said at the time that his announcement was “for spiritual as well as economic reasons.” There were estimates that the state economy could lose up to $10 million over the lost profits on flowers, cards, candy, and other passionate paraphernalia. The president of a Dedham greeting card company even sent the governor a telegram requesting to delay the holiday a week.

“The greeting card industry does 80 percent of its Valentine’s Day business during the week before the great day,” Wilbert Lynn told the Globe in 1978. “We had too much snow this year.” 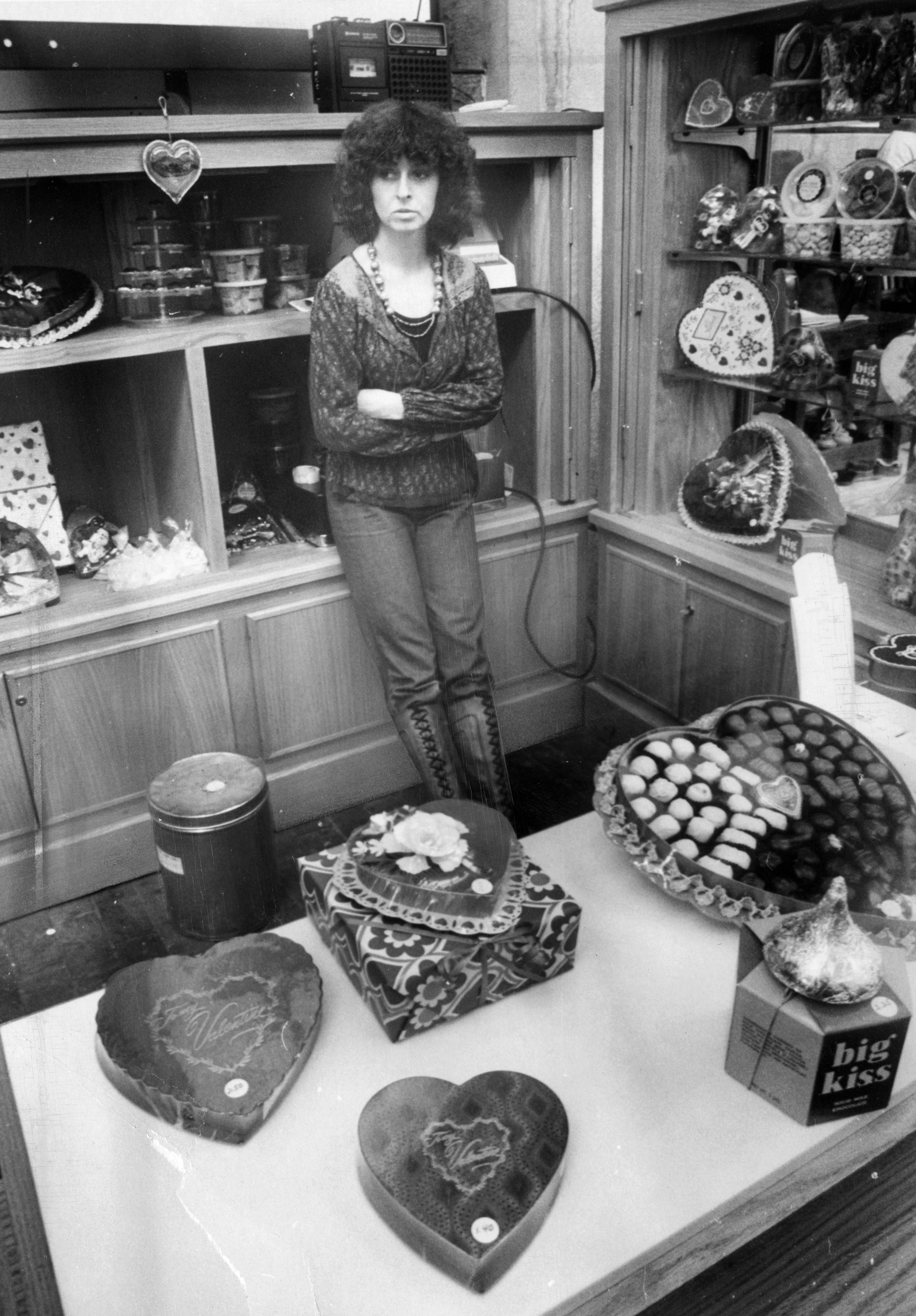 Suzanne Dydak waits at a candy stand in Boston’s Quincy Market on Feb. 13, 1978.

1978 wasn’t the first time a massive storm derailed the romantic mid-month festivities in Boston. Almost 40 years earlier, the snowstorm of record was the 1940 Valentine’s Day blizzard. Fourteen inches of snow and 60 mile per hour winds devastated the region. 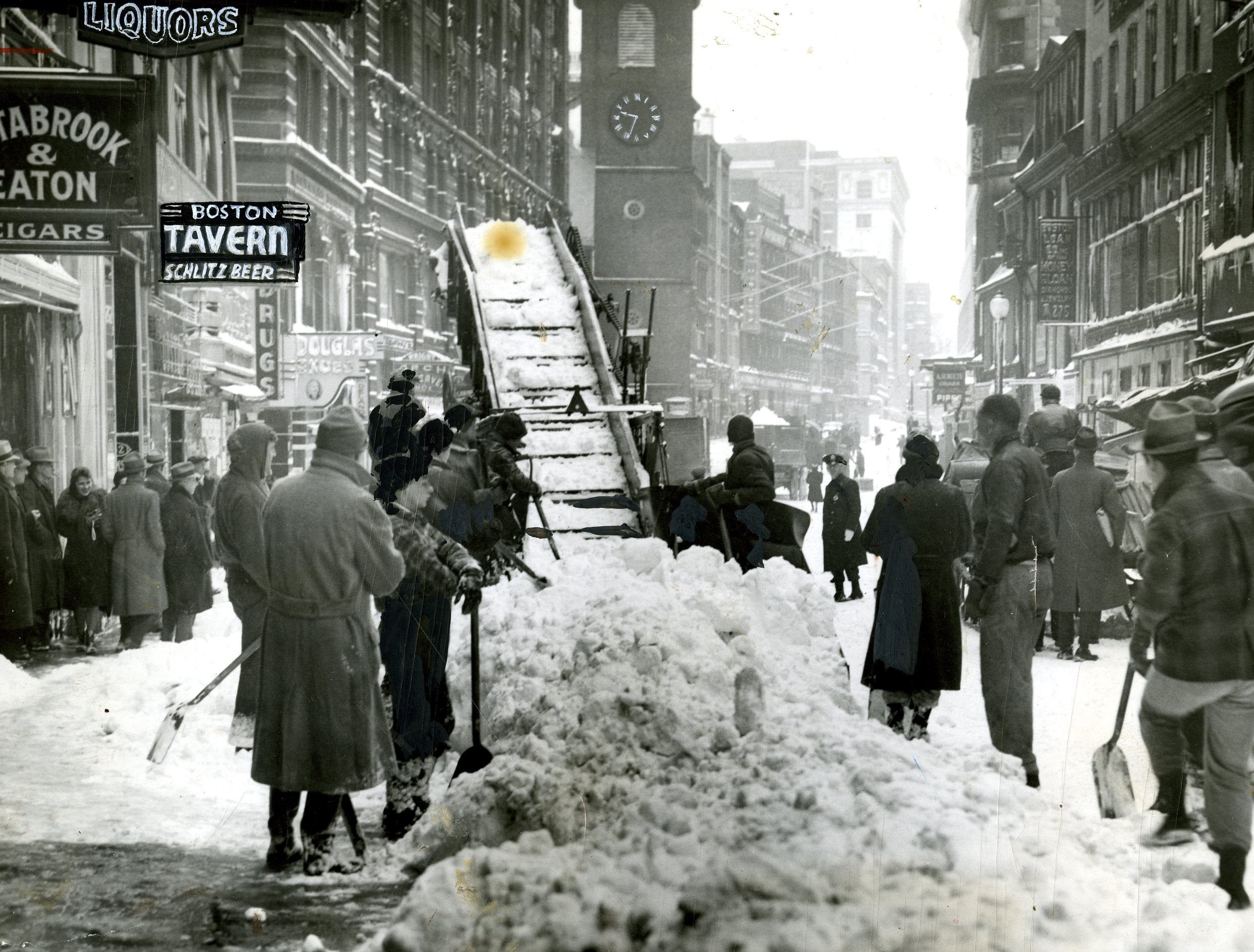 That year, one pair of newlyweds spent their first night as a married couple stranded on a bus in Medford, according to a Globe article published on the 16th. Another set of honeymooners needed a dozen friends and four hours to dig out their car in Beacon Hill before setting off on a trip to Mexico.

Of course, the 1940 Valentine’s Day storm affected far more than the newly married. Thousands of drivers abandoned their cars and trudged through the snow—a plight possibly familiar to those who lived through the ‘78 blizzard. 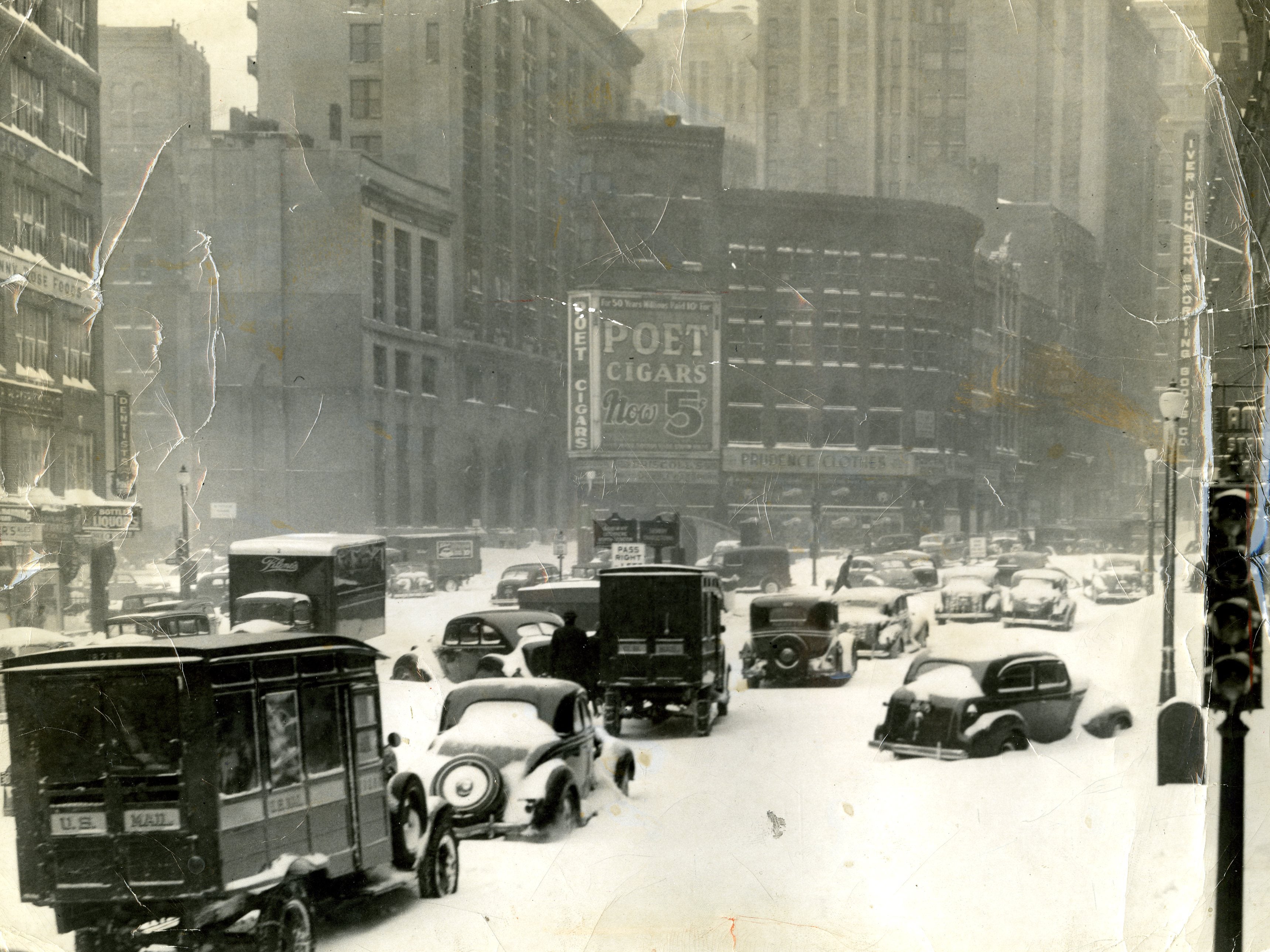 Automobiles stalled out in the heavy snow in Adams Square in Boston on Feb. 14, 1940.

Thousands more were stranded in North Station after attending Sonja Henie’s superstar ice show in the Boston Garden. Decades later, marooned sports fans spent the night in the arena after the Beanpot college hockey tournament in ‘78. 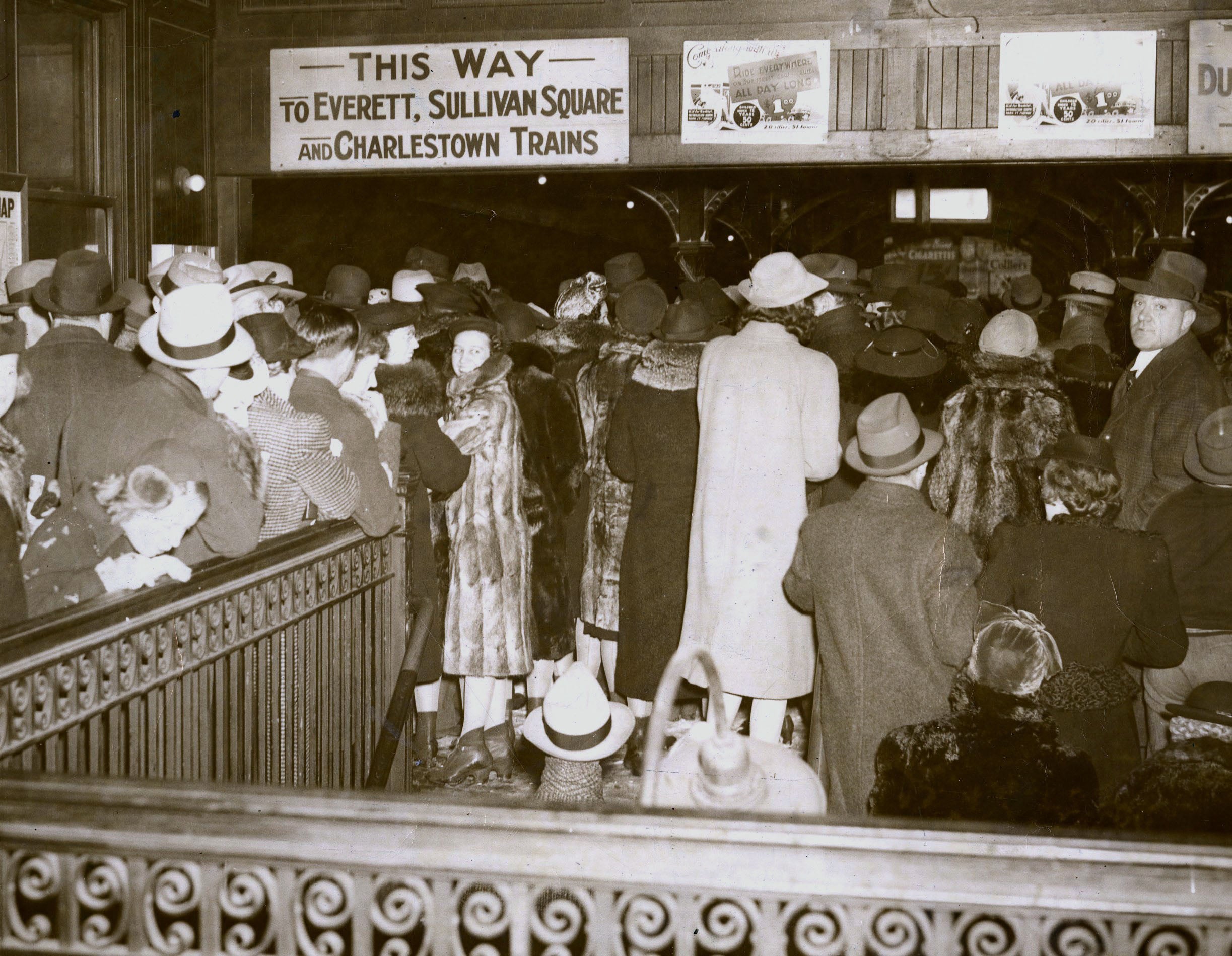 Thousands of Sonja Henie fans were left without transportation and stranded at North Station on Feb. 14, 1940.

Amid the coronavirus pandemic, couples in 2021 may similarly struggle to make plans and show their appreciation for each other. But at least there isn’t a blizzard in the forecast — just 1 to 3 inches. 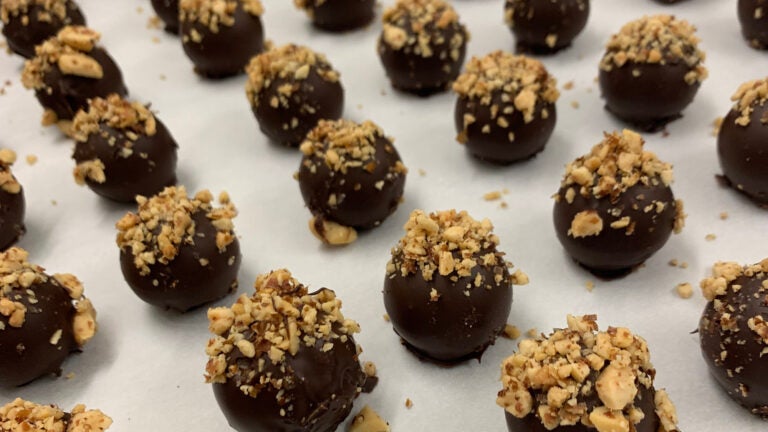 In search of the perfect Valentine’s Day gift? These local chocolate and flower shops have you covered.