While watching Monday night football at a friend’s house about 10 years ago, Dave New discovered a way to make plastic bags recyclable.

Just days earlier when New, a Melrose resident and plastic recycling innovator, noticed a pattern between the recycling symbol printed on his milk jug and the symbol on his plastic bag, he asked why.

Each had the number two pictured, indicating that the item contained high-density polyethylene, yet only the jug could be tossed in a bin. In the search for more information, New found himself talking to a recycling plant manager.

“I got an education in plastic bag recycling, and turns out plastic bags are really quite good for making into other products,” he said. Yet when recycled curbside, the bags tend to jam up the equipment at material recovery facilities because of their flimsy shape.

After mulling over his discovery, and dissecting his thoughts during the Monday game, New came to his invention: “What if we just melt the bags into a solid and then recycle it?” he asked his friend, who’s an engineer.

“So with one beer in hand, he goes into the closet and comes out with an iron and grabs a couple bags and crunches them into a ball and starts ironing them right there,” New recalled, laughing. “And sure enough, you can melt your bags into a rigid disk.”

Stunned by the concept and the possibilities it opened to support the environment, he designed a product called the “Obaggo” that can create a puck-like shape out of plastic items while sitting on people’s kitchen counters. The Obaggo densifies plastic bags and packaging films into rigid pucks that can be recycled curbside with other materials. The pucks would be separated at recycling facilities, and then New would collect them to be converted into pellets, before being transformed into new products.

New and his business partner Vicki Ferri have been pushing to get the product to market ever since.

“Plastic bags have been a plague on my family for a long time,” he said. “Some people have pet peeves about one thing or another, but my family has plastic bags.”

Growing up near the Meadowlands in New Jersey, which were used during the 1950s as a series of landfills, New said he always had a tangible reminder of the harm waste could do. New’s father wanted to reduce the amount of garbage funneled into the landfills and by the early 1970s, he founded one of the first recycling centers in the country in Montclair.

“It was pretty groundbreaking, we were called tree huggers back then,” New said. “I used to spend my weekends working there, unloading cars, sorting recyclables into the different bunkers.”

But he watched more environmental red flags emerge as packaging materials shifted toward plastics. Gone were glass Coke bottles and brown paper bags — instead, everything morphed into a synthetic material that couldn’t be recycled in the same way.

Only 10 municipalities collected plastic film from residents, city buildings, schools, and businesses year-round in 2019, according to results from a statewide recycling and solid waste survey. New said he established the Obaggo in hopes of giving more people the ability to actually recycle their plastic film after working with officials on designating a place to collect it.

The journey so far to share his invention has been filled with both excitement and disappointment.

“The learning curve is very steep,” New said. “It started out with a real flurry of activity because I thought I had found some kind of gold or something.”

Although the consumers New spoke to were generally conscious of sustainability and “leaving the planet clean for the next generation,” he said his project was not as well received by the environmental industry.

Most organizations didn’t want to spend much time envisioning the ways it could be recycled differently.

Massachusetts Department of Environmental Protection officials told him they were most focused on reducing heavy organic materials like construction and demolition waste. Material recovery facilities, he added, “have such a problem with bags that they don’t want to talk to anybody about receiving bags in any shape or form.”

“Each stakeholder in the plastic bag supply chain … has their own perspective on it and nobody really cared enough to back my project,” he said. “So I kind of put it down for a couple of years while I raised my kids and built my house and saved for their college.”

But a few years ago the issues surrounding plastic bubbled up again and became his priority.

“I really felt like nobody’s doing anything about it still all these years later,” he said. “Now China has stopped taking plastic, and now we have all the plastic here and we have no infrastructure for dealing with it. We’re going to just drown in plastic if we don’t start figuring out how to create circularity.”

Right now nearly every piece of plastic, New said, takes a straight path from the producer to the consumer to the landfill or the incineration site.

“But if you’re going to live sustainably on the planet we need to take our resources and we need to bend them into a curve, and that place to bend it into a curve is right there in your kitchen,” he said. “When you finish a loaf of bread you got a bag. If that goes into the garbage can, it’s continuing on a straight line to the landfill and it’s never going to ever be reused. That resource is lost. But if you can bend that curve right there, take that bag and have it enter the recycle stream in an economical way, then it has a chance to be used over and over again.”

Bending the curve also means reducing the amount of plastic that people consume in every place possible, finding new ways to recycle and reuse the material, and redesigning products to not use plastic, New added.

Although years of mixed messaging over the way recycling plastic works have likely confused the general public, New said, the plastic recycling industry has been evolving in the background.

“There’s tremendous activity towards trying to make plastic packaging more sustainable using single resins that are recyclable as opposed to multi-layer packaging,” he said. “But the public is very confused because we’ve never helped them make it clearer.”

New explained how many non-recyclable plastic items will still have the recycling symbol printed onto them.

Many people also don’t know that they can take their bags back to the store and put them in the bin often placed at the front entrance, he added.

“My job is to help give the consumer an easy way to recycle [plastic bags] and educate them on what can be recycled,” New said, “and also be an advocate for better labeling and sustainable packaging.”

He said he believes manufacturers would make more packaging changes if they knew their consumers wanted it.

New said one of the biggest barriers to getting the Obaggo on the market is finding a local material recovery facility that will agree to perform a trial run “where we sprinkle the puck in the input stream to the material handling equipment and then validate that they all sort to the correct place and that they don’t contaminate the fiber stream or the glass stream or the metal stream or the water bottle stream.”

Until then, he’s building the first production run and brainstorming all the ways he could collect the initial slew of people’s plastic pucks — from offering people shipping labels so they can mail him their first year’s supply, to having kids plop the disks into a bin outside their schools, to collecting them at local recycling centers and transfer stations where people drive their waste, to partnering with nearby clothing drop off boxes.

“This can’t go on forever without us capturing it and trying to recycle the resource,” New said. “We have to really look at this as just a monumental problem that needs an all-of-the-above solution.” 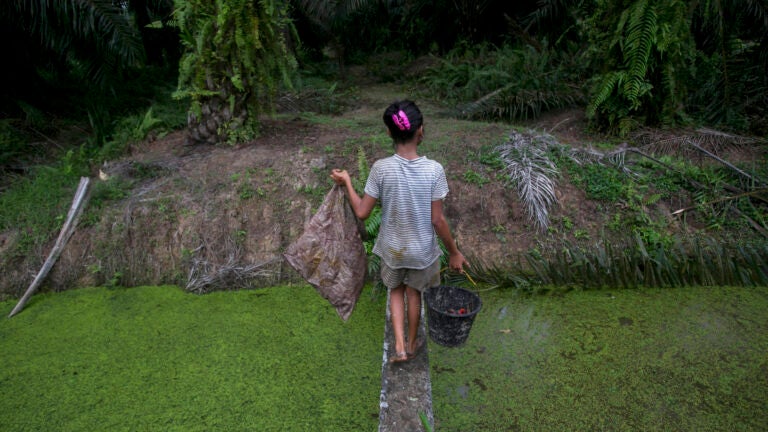