Not every vet could x-ray a gorilla one day, and check a flamingo for West Nile virus the next. And how do you treat a stick insect? You don’t, at least not individually. “With dozens of stick insects, they would be handled as a colony,” said Dr. Eric Baitchman, director of Veterinary Services for Zoo New England, which includes the Franklin Park Zoo in Boston and Stone Zoo in Stoneham.

With animals ranging from A (anaconda) to Z (zebra), Baitchman is faced with an endless range of anatomies and a variety of wild animals who don’t always want their eyes examined or blood checked. Often there is no vet playbook to consult; zoo vets push the limits of veterinary science by researching cases that have never been examined before. “A lot of what we face, we are seeing for the first time,” said Baitchman, who gave the example of a young sloth that appeared to have leukemia. “We quickly realized we had no other sloths with leukemia to compare it to. I had to consult with human specialists and vets, then figure out how to take this information about dogs, cats or people and figure out how to apply it to a sloth.”

In the last few weeks at Franklin Park Zoo, Baitchman, 37, has overseen the annual health check for African straw-colored fruit bats in the Tropical Forest; made sure that all the western lowland gorillas received their flu shots, and administered the last of the vaccine series for red panda cubs. Baitchman oversees a staff of eight, including four vets, several vet technicians and a hospital keeper. “Our most important link to the animals, though, are the zookeepers, who can perceive when an animal is sick or in need of attention,” said Baitchman.

Q: Can animals “catch “ a cold?
A: It’s rare. So much of zoo medicine is preventative. And wild animals with wild instincts try to hide weaknesses or illness; they are not going to show symptoms in the same way as a dog or cat, because weakness in the wild is a considerable disadvantage. We perform routine check-ups on as many animals as we can, but that doesn’t mean all of them are examined every year.

Q: What type of animal is your favorite?
A: My passion is amphibians. I’ve always been drawn to amphibians because they’re so diverse and have such unique life histories in the way they have evolved. A lot of the work I do with amphibians revolves around a conservation project to rescue amphibians that are in extreme danger of extinction throughout Panama because of a deadly fungus.

Q: What’s the biggest misconception about zoo vets?
A: People assume that working with zoo animals is similar to working with pets, and that you can just do an exam on a table. But it’s much more difficult than that. Our animals have wild instincts, and to do an exam on a potentially dangerous animal like a tiger requires first anesthetizing and then performing the exam. The hardest decision is: When do you intervene if, say, a tiger looks a little lethargic today? Is the animal just having an off day, or is there something really wrong? It is a serious decision to anesthetize an animal.

Q: How did you become a vet?
A: As a young kid, I was very lucky to have a family friend who worked at the Seneca Park Zoo in Rochester, N.Y. At first it’s amazing and exciting to see those animals up close and have access behind the scenes, but as I got older, I became passionate about zoo medicine and the ability to have an impact on exotic species.

Q: You and your wife, Brandi, both work at Franklin Park Zoo; she’s a zookeeper who works with the gorillas. Do you talk shop at home?
A: No, we try to avoid talking too much about work. What we do is exciting but we don’t want to have only that in our lives.

Q: Do you consider yourself a modern-day Doctor Dolittle?
A: No, Doctor Dolittle had the ability to talk to his patients, and unfortunately I can’t speak any animal languages. 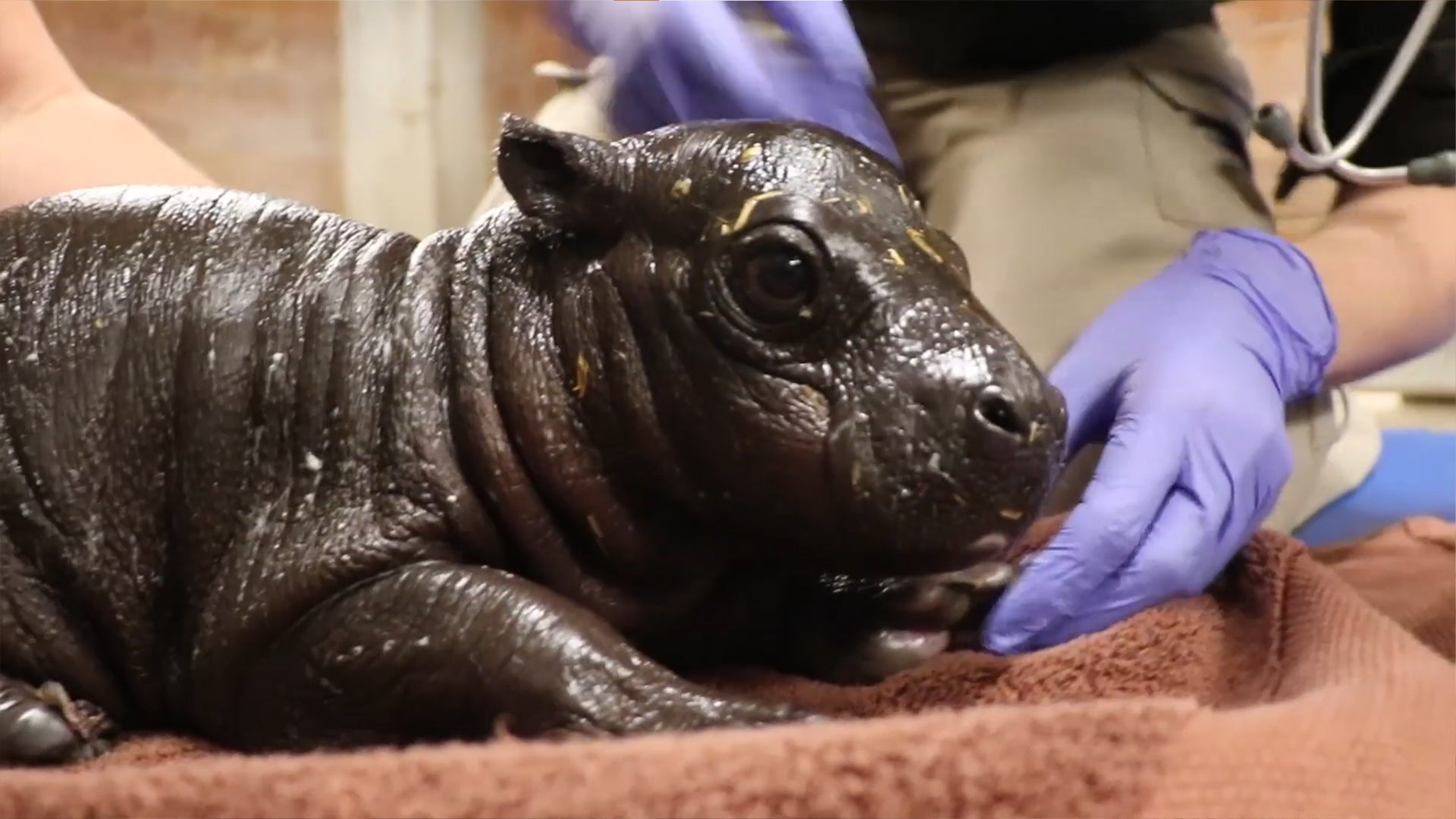 A baby pygmy hippo was born at Franklin Park Zoo, and boy is it small