By Cindy Atoji Keene
With skilled seamstresses painstaking cutting fabric and hand-stitching flags as large as 30 feet wide, labor is the highest percentage of the costs for New England Flag & Banner. But company president Ned Flynn is proud to still be manufacturing locally in a 14-thousand square feet factory in Watertown, where workers not only painstakingly appliqués banners but also craft the wooden flag poles and metal brackets. “We’ve always stuck to the classic way of doing it, in lieu of subpar vinyl methods that some competitors use, and that’s allowed us to dominate the industry,” said Flynn, 55, who produces 400-500 flags a month, including the Boston Bruins and Boston Celtics championship banners as well as thousands of custom flags for pro, collegiate and high school sports teams throughout the U.S.

Q: You bought the company seven years ago – what was the biggest surprise to you when learning about the operations?
A: I didn’t expect to see such a high level of craftsmanship among the shop people, some of whom have been here for 30 years. Most of them are native Chinese and some worked in the garment industry in China. We had six seamstresses, cutters, and layout people when I came on board, and now we’re up to 20. They’re highly paid with benefits and have a lot of pride in their abilities.

Q: Breakthrough banners are a big trend now – how are these made?
A: Breakaway banners are widely popular for high schools in southern states – they’re held by cheerleaders so the athletes can burst through and make a dramatic entrance on the field. They’re made of two banners sewn together with a strip of Velcro between the two. The first player goes through and rips it open, and the rest follow. Some are huge – 30 feet wide by 15 feet tall.

Q: What’s the most unusual banner that you’ve made?
A: I got an email a few years ago from someone who wanted a 27-star U.S. flag. I emailed him back, asking about the significance of the 27 stars. It turned out he was an Army Ranger captain from Florida, based in Afghanistan, and wanted the flag to show his Floridian roots ¬–27 stars, represent the flag as it stood in 1845 when Florida joined the union. He sent us photos of the flag flying on his helicopter in the Middle East, which was really cool. I don’t like to discuss when we make a flag for benevolence, but obviously this was one case of this.

Q: What goes into making a flag like the Bruins championship banner?
A: First the image is sent to the plotter, which is essentially a machine that prints ou a stencil of all the lines in the vector art. The paper has little holes in it, and the layout person takes the stencil and lays it over three 10×15 sheets of fabric: black, gold and white. She runs chalk over the perforated holes in the stencil and then the the sewer stitches the lines, and the banner goes to cutting. If the appliqué is black and white, then gold, the white and black will be cut away so only the gold shows. The end result is a three-dimensional look with raised fabric. Because of the bright lights of the TD Garden, we also take a blackout liner, pin it all together, then stretch the fabric as tight as possible so that when it hangs, it will not wrinkle. The final touches are joining the layers together, adding gromlets and hole pockets, then our label and a lucky penny.

Q: What’s a trivia fact about a Boston championship flag?
A: I’m sometimes asked, ‘Why are some Boston Celtics emblems white in the middle and others green?’ White indicates a win on home court while green signifies the team cinched the championship while away. 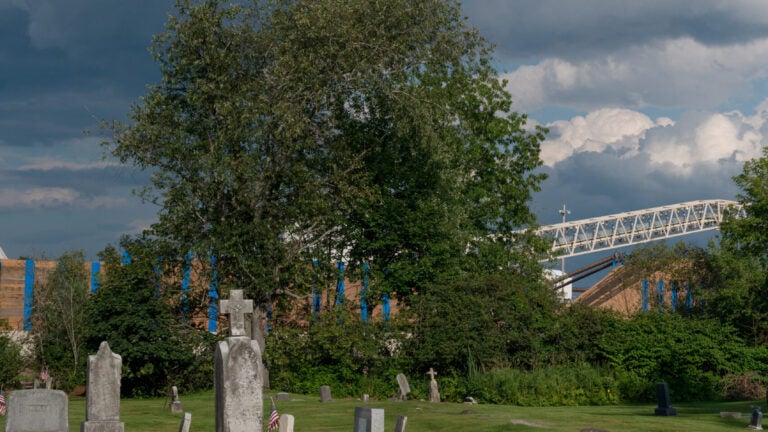