The Weissman Preservation Center is home to a team of highly specialized conservators and technicians, dedicated to safeguarding the millions of rare holdings – books, prints, manuscripts, maps, photographs, drawings – at Harvard Library. As one of two preservation staff members dedicated to photo conservation, Elena Bulat describes her role as “chemist, art historian, photographer, and much, much more.” But Bulat wants to make it clear that she is not “restoring” any one of the over 8 million photographs throughout the university’s libraries, archives, and museums, but rather tasked with conserving them. “Restoration implies it’s broken but conservation is stabilizing the photo, preserving the integrity of its current state,” said Bulat. She was awestruck by the size and diversity of the collections when she first arrived seven years ago. “Harvard historically embraces experimentation in research and teaching, so I was expecting a wide scope of photographs. But honestly, it is absolutely unimaginable,” said Bulat, who came to Harvard from the George Eastman House in Rochester, N.Y., an international museum of photography and film.

Q: Are photograph conservators are a rare breed, so to speak?
A: If you did an informal survey of photographs conservators across the globe, they number only about 70 or so. It’s a field so small that I know almost everyone by first name, whether in Europe, New Zealand, or Russia. We typically don’t count Asia, because their conservation philosophy and approach is different from the west.

Q: Many photos come to the lab to be stabilized before they are digitized. What’s an example of that?
A: Just recently I went through a series of late-19th century photos from the Divinity School, including images of architectural elements. They were silver gelatin photos and never mounted, and some were tightly rolled for storage; gelatin photos tend to roll anyway because of the difference between gelatin and paper support. The photos were re-humidified by putting them in a special humidification chamber that has a soft mist; this relaxes the photo. Then they can be put under light pressure so the photos slowly acclimate to this new flattened state of being. That’s just part of the process that a photo can go through.

Q: What are the tools of your trade?
A: Lots of brushes and scalpels. I have my own favorite set that are scalpels that might be used by an orthodontist. Photo conservators have to adapt tools from different disciplines to use. We might use these scalpels to ‘skin’ or thin paper, matching it to the thickness of the original paper, or to remove adhesive from a photo. Another favorite tool of mine is a great set of very fine spatulas.

Q: What project are you currently working on?
A: We’re working on a “Salted Paper” photograph survey across Harvard repositories. Salted paper photographs are the earliest photographs on ‘paper support.’ As we do the survey, we’re collecting all information about each photograph and its condition, as well planning for exhibitions and publications. The survey isn’t completed yet, but it’s already clear that this is probably the biggest collection of these early photographs in this country.

Q: Do you ever worry about changing the nature of the original object by attempting to conserve it?
A: I’m a member of the American Institute for Conservation, a national organization that upholds professional standards, including a code of ethics. This is important, especially for photography, because unlike painting or other arts, photography is still a very young specialty. When there is a loss in a photo, for example, we do not try to re-create the image but rather match the tone of the area that is missing. So it might look like a blank white space. Also, there is a constant dialogue between the conservator and curator. Often we have meetings to discuss specific treatments.

Q: How do you preserve your own photos at home?
A: I’m from St. Petersburg and unfortunately all my family photographs from prerevolutionary time were destroyed back in that city. Some of my ancestors served in Russian Tsar’s upper army. The oldest part of the collection is in albums or boxes – thanks to my grandparents and to my parents. Albums are the best solution, but not magnetic albums with plastic sleeves, just regular old fashion albums. For archiving my digital photographs, I am not doing anything special yet – shame on me! 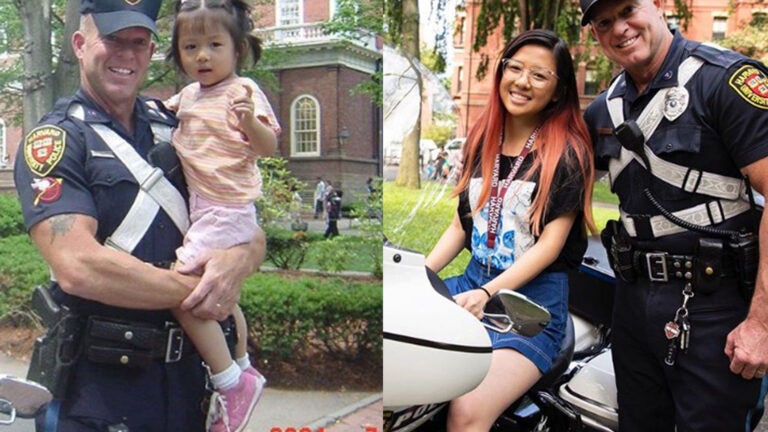 15 years ago, a police officer held a toddler for a photo at Harvard. Now, she’s a freshman on campus.