Making a robot is one of the most complex system engineers can build, said Robert White, principal mechanical engineer at Rethink Robotics in Boston. “It’s not just the mechanics of building it, but the electro-mechanics of having it move and the software, hardware and mechanical systems all working together,” said White, who has been a main player in the creation of Baxter, an industrial robot used for simple repetitive production line tasks such as sorting and loading. White is working on the next generation of Baxter, including optimizing the robotic arm to balance its precision and ability lift heavy objects.

Q: You’ve been with Rethink Robotics since its initial concept and were very involved with the initial production of Baxter. What are you working on now?
A: I like to say that we’re working on the “special sauce,” some of which includes hardware and intelligent systems that use force sensors that can detect the force and movement applied to it. This makes manufacturing robots more useful for things like precision assembly. We are perfecting the controls and software using information that we learned from putting Baxter out in the real world. We want a safer, faster, and more affordable robot.

Q: What is the reaction to Baxter on the factory floor?
A: People are pretty accepting of Baxter; he looks very humanoid – he has a face screen that gives feedback; he can look surprised, confused or even sad. Unlike traditional industrial robots, Baxter isn’t in a safety cage to protect people around him – he would never pin a person to the wall like some robots that have no sensing devices. And you don’t have to be a programmer to figure out how to use Baxter; he is trained by moving the arms and ‘showing’ what to do with a point and click process. In Nashua, N.H., one petite woman went up, took Baxter by the hand, and showed him how to do a task.

Q: What are various considerations when designing a robotic arm?
A: We start at the task that we want the robot to do and work backwards. If the arm is 30 inches, how far does it have to reach out to pick up an object and move around? How much strength should the arm have? Making the arm bigger and stronger can mean that it needs to overcome inertia when accelerating; on the other hand, if it doesn’t have enough strength, it won’t be able to pick up heavier parts. Can the arm move quickly through the air but still be extremely precise when picking or placing an object? In all of these, there is a trade-off game.

Q: Were you involved with the design of the gripper?
A: There are hundreds of different grippers or claws out there, from scoops to three to two prongs. We built our own grippers as well. Think about the objects that you try to manipulate. Baxter has two “hands,” a suction cup and parallel finger-type gripper with a jaw. There are multiple suction cup and gripper sizes. One gripper has 10-12-inch fingers on the end and can pick up a tall stack of cups and drop them into a box. We are just about to start a gripper project, reviewing what customers have done with Baxter’s current grippers.

Q: How many robots are floating around Rethink Robotics headquarters?
A: Since we’ve gone through different generations of robots, there are a number of prototypes floating around the office. In the center of the building, 20-30 robots are set up, all red and black schemed Baxters. Our durability testing room can be a little scary – there are arms swinging weights around, rods driving joints back and force, and testing cables. It almost looks like a gym but without humans. Another room has robots that are just sitting there doing tasks to evaluate repeatability. They are taking things out of boxes and putting them back. Some of the robots have been doing the same task for months on end.

Q: Have any eerie robot stories to tell?
A: Yes, I was at work late at night and passed by a robot that had always been inactive. As I walked past, it suddenly woke up, grabbed a puck and put it in a box. When you’re in the office all by yourself, something like this is a bit creepy. 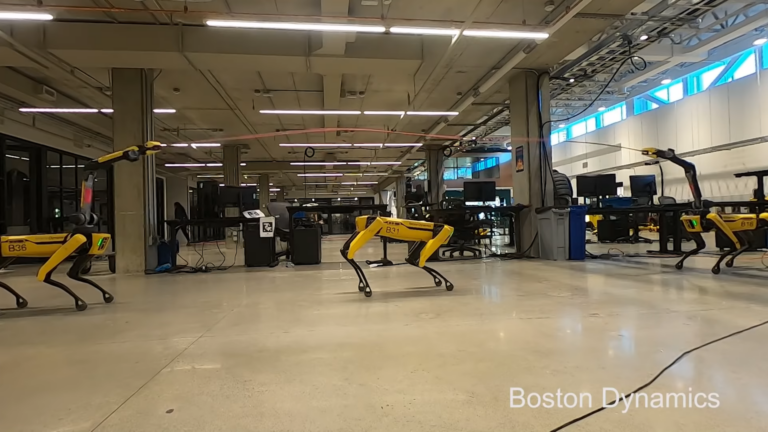