Prop stylist and craft developer Kimberly Stoney is in the midst of preparing for Halloween – making bats from recycled pasta boxes; Fig Newtons into gravestones, and brownies into coffins. The holiday projects that she creates will be featured with step-by-step instructions in magazines, websites, and online videos for do-it-yourself enthusiasts. “Those wonderful crafts with ‘how to’ information and inspiring photos are the end result of an imaginative team of editors, photographers, art directors, and more,” said Stoney, who conceptualizes and produces such projects out of her home studio in Littleton. Stoney, a freelancer who shares her ideas on the blog The Tiny Funnel, says inspiration sometimes comes from being visually aware of things around her; she’ll see a paper towel roll as a flower or a paper bag as a piñata. “When I’m creating a new craft, fun is the most important consideration; is it enjoyable to make?”

Q: In the world of styling, or the art of preparing objects and sets for the camera, there are all sort of subspecialties. What are they? A: There are craft and prop stylists such as myself, and then food and fashion stylists of course. Some stylists will do only tabletops, others focus on bedding, like sheets and comforters, and others do only textiles. All of these people contribute to the end product, a photo that looks beautifully composed and compelling.

Q: You got into this line of work because your neighbor was an art director and asked you to make Christmas trees out of pinecones, right?
A: Initially, he asked me to test a dog biscuit recipe, because I had a dog. Then he said, ‘Would you like to develop this craft? I need three to four ideas.’ I ended up giving him 20 different variations – pinecones using white, green and red paint; tiny pom poms; glitter “snow” and more.

Q: How does your craft-making process evolve?
A: As one example, I happened to be looking at a pomegranate bottle and, maybe because I had winter things on my brain, it looked like a snowman. I painted it white and that looked pretty horrible as the paint didn’t stick to the plastic. Next, I tried putting some white tissue paper with glue on it and it looked much better. There are all sorts of considerations I need to keep in mind: Is it easy to make? Does it actually work? If it’s time-consuming or complicated, is it worth it? Are the directions clear? Are the materials accessible and affordable? Is it age-appropriate? Is it a craft for a family or a classroom? A recyclable vs. a keepsake?

Q: You probably hate throwing anything away, because it may come in handy for a craft?
A: I keep milk containers, both plastic and cardboard; egg cartons; and a lot of cereal boxes, because they’re the right weight of cardboard. I love the round salt boxes because they make great three-dimensional objects. I also save a lot of cleaned chicken and meat trays for holding glue and paint and glitter. These sort of recyclables come in handy for those times when I need 64 paper towel tubes or four cereal boxes to build a garage or something. It’s like a tiny craft store in my second floor, with boxes of yarn, felt, and fleece, as well as rubber stamps, fake flowers and ribbons. I work on the bigger things in my 1940’s green barn, where I can spray paint or stretch out my art.

Q: You have a degree in ceramics and a master’s in sculpture – is that where your inspiration comes from? A: I think my craftiness stems from much earlier. I went to the Waldorf School, which is a very hands-on, tactical education. I learned a lot about how to make things, take them apart and put them back together. It’s a big “doing” kind of education that helped me decide to take a path in my life to be a maker.

Q: What do you take with you on a photo shoot? A: When I need a lot of supplies, I load up my Volkswagen EuroVan. I’ve carried everything from couches and rugs. I carry all my basic supplies in a black fishing box, including double-sided tape, clear filament line, museum putty, Goo be gone and a X-Acto knife.

Q: What’s your craft horror story? A: One summer day, it was 100 degrees and we were shooting a train made out of gingerbread and frosting in an studio that wasn’t air conditioned. All the parts were pre-cooked, and I was going to assemble it there, but because of the humidity, all the gingerbread was soft and oozy. It was like a bad dream. We’d build the train, and it would fall apart. I ended up crisping the pieces in the oven and then dashing to the studios while the gingerbread was still crisp. We should have just used chalking to put it together instead of frosting. It was a nightmare, but you can’t tell from the photos, which are beautiful.

Q: What does your husband do for his hobbies while you’re doing your crafts?
A: He builds motorcycles in our barn –and races them as well – and he also rides unicycles, including in the dead of winter. He puts on his bright yellow snowsuit and then he goes for a unicycle ride in the snow, accompanied by our loyal dog. 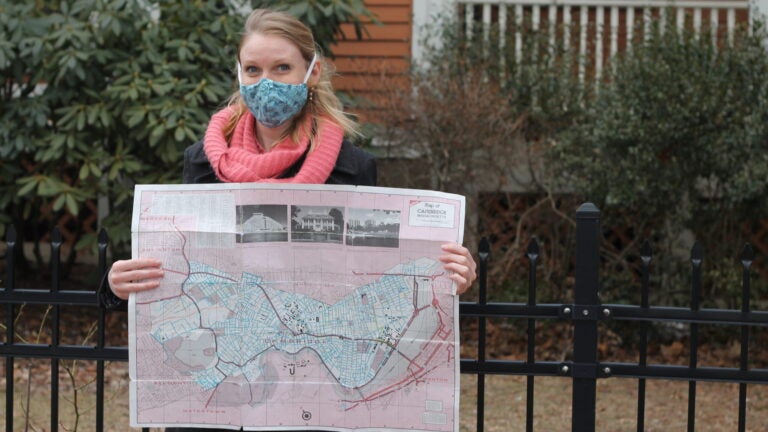 She's nearly done with her pandemic project: Walking every single street of Cambridge