Maintaining immaculate yet playable grass tennis courts is a balancing act for head groundskeeper Mike Buras and his 12-man crew at Longwood Cricket Club. The courts require a firm grass cover and need to be completely dry for safe footing – but healthy plants also must have water to survive. The fibrous pow annua grass species used on Longwood’s 25 grass courts is a native species that is frequently labeled as a weed, but Buras says when properly managed, it makes a desirable court surface. “Grass is a living thing and we learn to push the limits to make the courts as good as can be, which is risky because it stresses out the grass,” said Buras, 53, who also oversees 19 clay courts at the Chestnut Hill club.

Q: How consistent are the grass surfaces from one tennis club to another?
A: It varies greatly – each club does what they desire, depending on what their resources are. Tennis players know that; that’s what makes the game so interesting on grass courts. When you’re an athlete you have to adjust to different surfaces and conditions.

Q: Do you follow the best practices of the sports turf or golf industries?
A: I’m a member of the Sports Turf Managers Association but we are right between sports turf and golf. We cut the grass like a golf green, mowing at 5/16 of an inch with very precise mowers measured to thousands of an inch, but from sports turf we adhere to all the techniques to limit wear-and-tear.

Q: Does one have to play tennis to really understand as a groundskeeper what these courts should be like?
A: No, but it helps to understand the game. I watch the game but I also play, which gives me an appreciation of the speed of the court and the way the ball bounces, grabs, or skids on the grass. Tennis is the only sport where players play on at least three different surfaces – clay, grass, and hard courts – and in the rule books, there is no standard other than size.

Q: Longwood has been around for more than 130 years and has had only five head groundskeeper, a sign of the job’s specialized nature. What did the past groundskeeper pass onto you?
A: A lot that we do, especially on the clay courts, are techniques from the original groundskeeper back in 1880. For example, we still spread the hard-top dressing with custom handmade spreading sticks. But like any other business, we have added a lot of technology and learned from the latest research. We have a computer-controlled irrigation system, although that’s only at night. The rest is old-fashioned hand-watering.

Q: What’s the worst weather that you’ve faced in your 17 years at the club?
A: In March 2007, there was a dramatic drop in temperature that killed off all the pow annua. The courts were wet and the temperature dropped from 60 degrees to single digits in a matter of a few hours. The plants couldn’t deal with it and they completely died. We still opened the grass courts the first week of May that year but it was a challenge.

Q: You like to play golf in your free time — are you analyzing the greens while you’re playing?
A: Oh yes definitely. I’m looking at what grass species is on the green; how healthy it looks; how fast the green is rolling. It’s hard not for me not to notice these things. 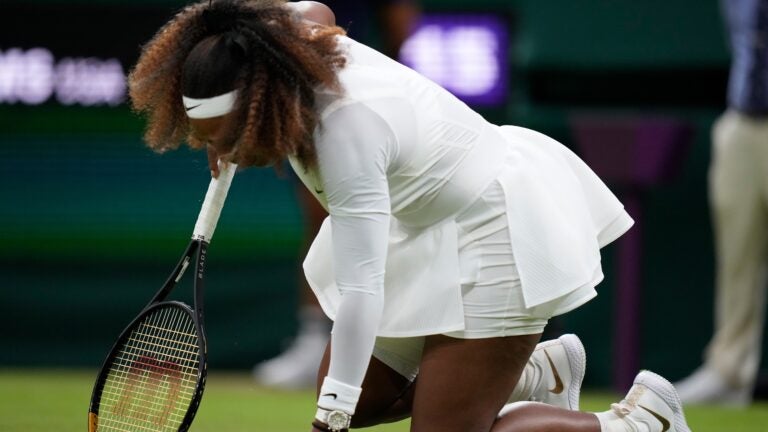 'Sad story': An injured Serena Williams is out of Wimbledon