The next installment of the “Taken’’ series, in which Liam Neeson’s remarkably unlucky character Bryan Mills has to kill many people in order to save his daughter/wife/self/[insert fourth installment plot here], will premiere on Jan. 9.

As part of the advertising effort, the movie’s promoters have taken advantage of Mills’ “particular set of skills’’ to create a LinkedIn profile for the former CIA agent and “security consultant.’’

You can even enter a contest to have “Bryan Mills’’ record a video endorsing the skills on your own LinkedIn profile.

More than 31,000 people have followed the “Taken 3’’ LinkedIn page, where the gravel-voiced actor calmly explains the rules while committing horrible yet justified violence.

But before you potentially have Liam Neeson broadcast your professional abilities to the world, you better have your profile in order. Turns out, Bryan Mills’ profile is actually pretty instructive for job seekers looking to improve their LinkedIn presence.

Even if you don’t have the steely-eyed sex appeal of Liam Neeson, a profile picture is an important first step. As Viveka von Rosen, author of LinkedIn Marketing: An Hour a Day told Forbes, “If there’s no picture, it instills no sense of trust or engagement. People go to what is he or she hiding?’’

LinkedIn’s official blog says adding a picture could get 14 times as many people to look at your profile.

Mr. Mills has also done the smart work of filling out his industry, “Security and Investigations,’’ which LinkedIn says will give a similarly large boost to profile views.

His job title is a little lacking though. “Security Consultant’’ is okay, but most experts recommend you take advantage of the full 120 characters available in the headline to explain your role using keywords likely to show up in searches. Think of it less like a job title and more like your personal tag line.

Keywords are especially important in the summary section because that’s the area LinkedIn’s algorithm relies on for search results. This is the place for industry buzzwords and a quick round up of any important clients you’ve worked with or awards you’ve won. LinkedIn says a summary as short as 40 words makes a big difference.

Do not follow Bryan Mills’ example here; his summary is vague, terrifying and, you know, an ad for a movie. 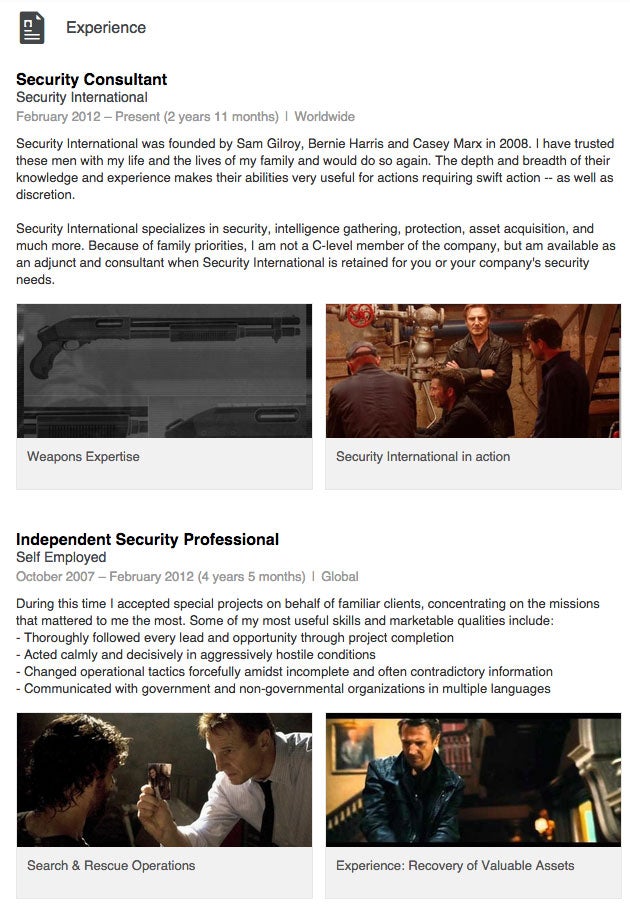 Mills’ profile makes good use of the experience section. He doesn’t just list his previous employers, but describes his responsibilities and accomplishments with each.

He also takes advantage of a relatively new LinkedIn feature that allows users to add photos and videos for each work experience. Only Neeson can get away with posting photos of guns and videos of him punching bad guys, but if multimedia creation is part of your work, this is a great place to show it off.

Unsurprisingly, this is where the “Taken’’ profile really shines. Mills has been highly endorsed by other users for his “particular set of skills,’’ and has reordered the section to showcase the most important skills at the top of the list.

Curating your skill endorsements can take some effort, but LinkedIn says members who include a skills section get 13 times as many profile views. Endorsing others is often a good way to get an endorsement in return. Just emailing some close friends and asking for specific endorsement might work, too.

There are a few features Mills’ profile ignores altogether – like the education section – that LinkedIn says can be helpful in boosting profile views. Being active in industry-related groups can really help increase the number of people you’re connected with.

Overall, engagement and responsiveness is the key if you’re looking to grow your LinkedIn network. Mills has that one covered. He accepted my invitation to connect within 15 minutes.

Job-hunting tips for a recent grad