There are a lot of misconceptions about how women act at work.

But wouldn’t it be nice if we lived in a world where men and women were just looked at as people?

Professor Emerita of Management and Psychology at Gettysburg College Dr. Virginia Schein told Boston.com that in an ideal world, men and women would be treated merely on their credentials and experiences, not on their gender.

“We haven’t reached the stage yet that we see male and female and we just wonder about qualities,’’ she said.

Last week, the Wall Street Journal published the article “Women at Work: A Guide for Men,’’ about how to deal with women in the workplace. The author, Joanne Lipman, discussed various ways in which she could “demystify’’ communicating with women.

Lipman wrote: “We are flooded with career-advice books for women. There are women’s networking groups and leadership conferences galore. But they’re all geared toward women, consumed primarily by women and discussed among women. I am convinced that women don’t need more advice. Men do.’’

Lipman discussed how women often use apologetic language and neglect to ask for promotions or raises. She also said women often feel as if they aren’t respected by colleagues.

Dr. William Pollack, Associate Clinical Professor of Psychiatry at Harvard Medical School and a consultant on gender in the workplace, said men and women working in mixed groups have higher rates of performance, but lower rates of satisfaction, though research still doesn’t show why.

Pollack said the only biological difference between men and women is women’s ability to have children. But there are still some communication differences.

Schein said women often ask questions instead of saying bold statements, but this tendency has lessened over time.

“They [bosses] are doing much better,’’ she said. “There has been a very big change, to the extent that bosses male or female treat their employees as equal.’’

But she also said that women are conditioned by prior experiences to not act with as much confidence as men.

Pollack said that most of these stereotypes between the two genders are socialized based on societal norms and experiences.

“It’s not cognitive,’’ Pollack said. “A lot is unconscious. We don’t know we are doing it and then if people call us [men] up short, we as men may get angry and women may get more apologetic.’’

This lack of confidence can, in fact, lead to women not asking for a promotion or raise, as well.

“We do have research that shows that,’’ she said. “We have to realize that, and that again comes out of the you can’t help what you have experienced.’’

She said that even if men are less qualified than women, they tend to be more likely to ask for a raise nd promotions or have the confidence they can do something.

But Schein also said having articles to remind women not to do this can be helpful.

Schein said there have been improvements – such as fewer women being called “girls’’ in the media. Though the WSJ article does say this still happens, Schein said it is not as frequent as it once was.

Though some things have improved, one thing that has continued to plague women in the workplace is pregnancy and maternity leave.

Schein said this “issue’’ needs to be framed in a different light.

“It’s not the women’s problem,’’ she said. “It’s our workplace that needs to understand how the world works if we want population to continue and needs to make changes in structure.’’

Judy Shen-Filerman, the CEO of Dreambridge Partners, a leadership training and career development coaching firm, helps her clients try to be their best self. She often helps people overcome situations in which they are the minorities, or underrepresented, like women.

Her advice, though different for each person, has this underlying theme: “For me powerful leadership and effectiveness comes from understanding and owning my talents, gifts and skills, you have to own your assets,’’ she said.

She acknowledged that women and men may communicate differently, but neither group should ever feel inferior. Women, she said, speak in a more indirect way, while men think linearly and to the point.

“It is important for people to understand that the way women naturally communicate is not a deficit,’’ she said. “It is a preference, we are just different and figure out what our preferences are.’’

Pollack said women’s workplace treatment is not an unsolvable problem.

“It can always be changed if people are willing if you understand what is behind it,’’ he said. 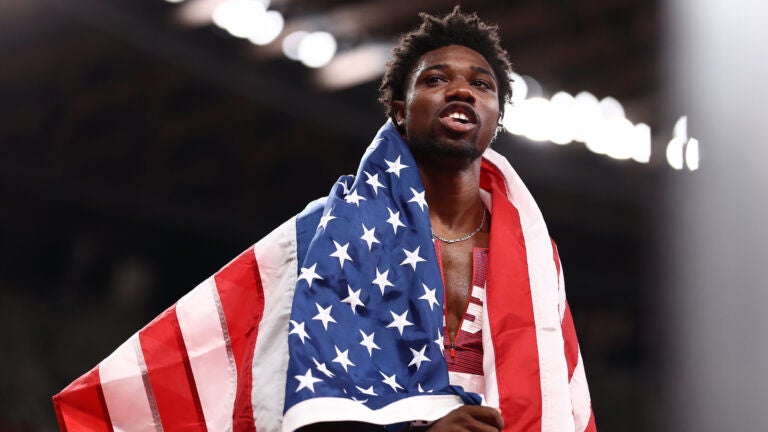 After earning a bronze, Noah Lyles opens up about mental health