“You ready, my little pug?’’ said Robyn White. She hunched over, gently putting a leash on a pug named Pearl.

Robyn White and her husband, Jeff White, own a dog walking business called “Me You and Lu.’’ (“Lu’’ refers to their pug, Lulu.)

Pearl is not their dog, but one of the 20 to 30 dogs they walk per day in Brookline, whose owners trust Robyn and Jeff to enter their homes to take their dog (or dogs) out for a walk everyday.

Robyn’s care and ease while walking Pearl (and the other three dogs she walked from noon to 1 p.m.) would make one think she’s been doing this her whole life. But it turns out Robyn and Jeff only started the business in 2009. Robyn didn’t even own a dog till 2008.

Robyn and Jeff first met at Boston’s Museum of Science. She was an account manager, and he was a public safety officer.

Robyn had never owned a dog, but knew she wanted one and that she had an affinity for pugs. Things progressed with Jeff, and they moved in together, but their apartment in Brookline wasn’t pet friendly, so they decided to move. They found a pet friendly apartment, signed the lease, and immediately got dog searching.

“The day after we signed the lease we started looking,’’ she said. They found Lulu at a breeder and immediately knew she was the one. “The breeder held onto her for us before we moved,’’ she said. Jeff had grown up with dogs, but Robyn never had the chance since her mom was allergic to dogs. Tragically, her family had to stick to hamsters, gerbils, and guinea pigs.

Jeff worked somewhat irregular hours, while Robyn was pretty much 9 to 5. They hated leaving Lulu alone. Though they hired someone to give Lulu exercise during the day, Robyn said they “didn’t love their dog walker.’’

One night in June 2009, they were out to dinner when the idea of Me You and Lu was born.

The next day, before they even announced their new business idea, a neighbor asked the two of them to start walking their dog – and just like that, they had their first client.

“Lulu is the true reason we started this,’’ Robyn said.

They both kept their full time jobs and started to dog walk on the side. They put up flyers in their building and that’s where they got their first customers. While walking, they would talk to other people with dogs on the street. Their company started spreading through word of mouth.

“In September 2009, Jeff went to part time,’’ Robyn said of his museum gig. “By January 2010, he quit.’’ Eventually, they had so many clients that Jeff couldn’t handle it on his own, but Robyn hung onto her job for financial security.

But by March 2010, they were so inundated, they had to start turning people down. They decided that if by December 2010 the business were big enough, Robyn would move to dog walking full time. 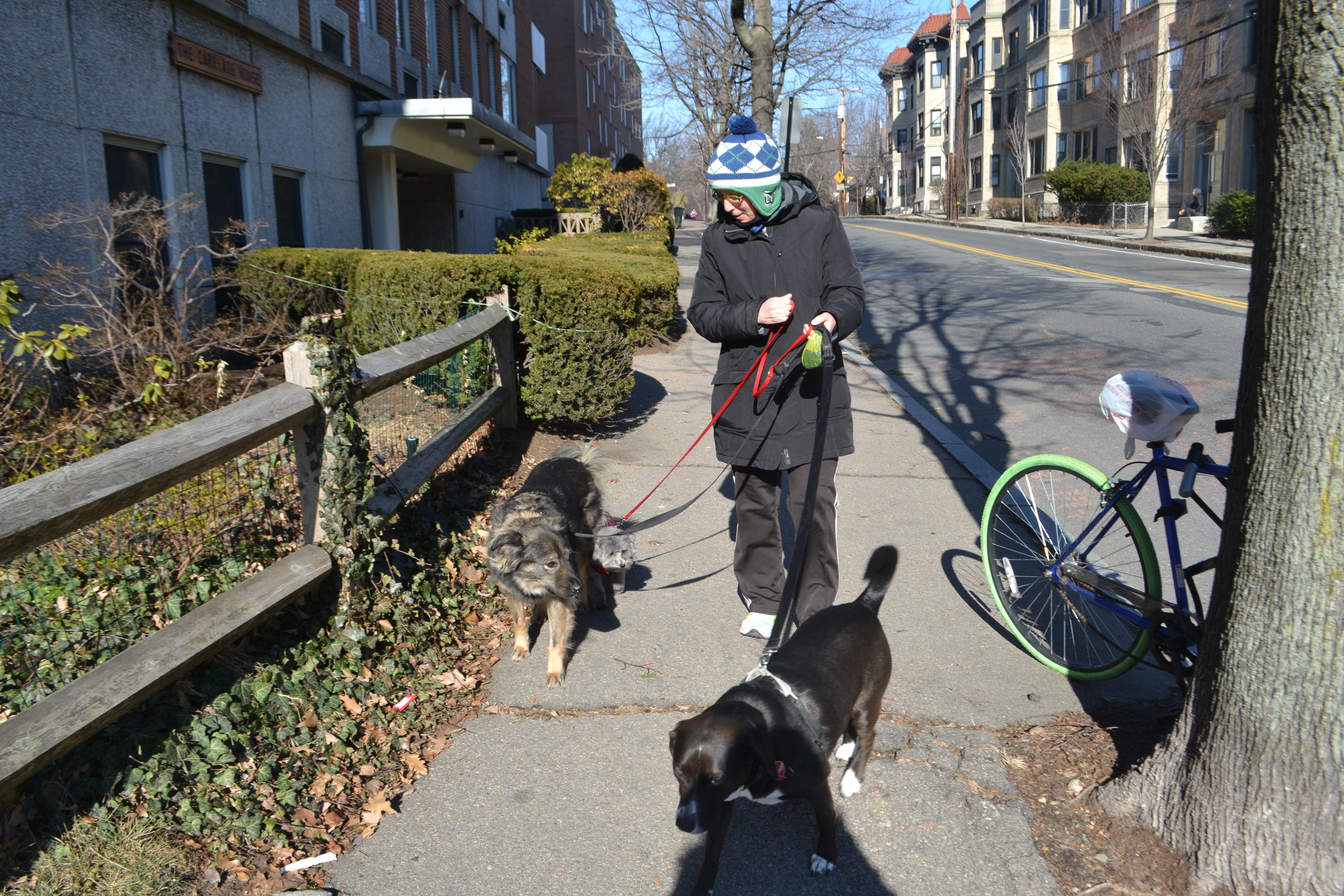 After living in Brookline for 10 years, Robyn said she knows the town like the back of her hand.

Fate took over, however, in June 2010 when she was laid off.

“We love it!’’ Robyn said, as she walked three dogs. She doesn’t like to walk more than three at a time for safety reasons. She and Jeff split up during the day and have their own dog walking routes. When they aren’t walking dogs, they have “office hours,’’ as they call them, in their home office where they do scheduling and balancing the books.

Robyn was raised to seek a job you truly love.

“My dad doesn’t call his job a job,’’ Robyn said. “A job is not something just to earn money. This is the first job I truly love.’’

But, owning your own business can come with challenges.

“The hardest part of owning our own business is learning to say ‘no’,’’ Robyn said as she twisted and turned throughout the streets of Brookline. “You have to take care of yourself.’’

She said it’s also difficult not to have set days off for vacation days. “It’s a trade off,’’ she said. “We feel that it is worth it to be your own boss.’’

Robyn said her job isn’t stressful, but that it’s physically tiring. The couple rarely cancels or takes days off. They cancelled on the lock down day from the Boston Marathon manhunt, and a few other days where there were huge storms, but even when the weather is extremely hot or cold, they at least go to their clients’ houses to take the dogs out for a quick bathroom break. 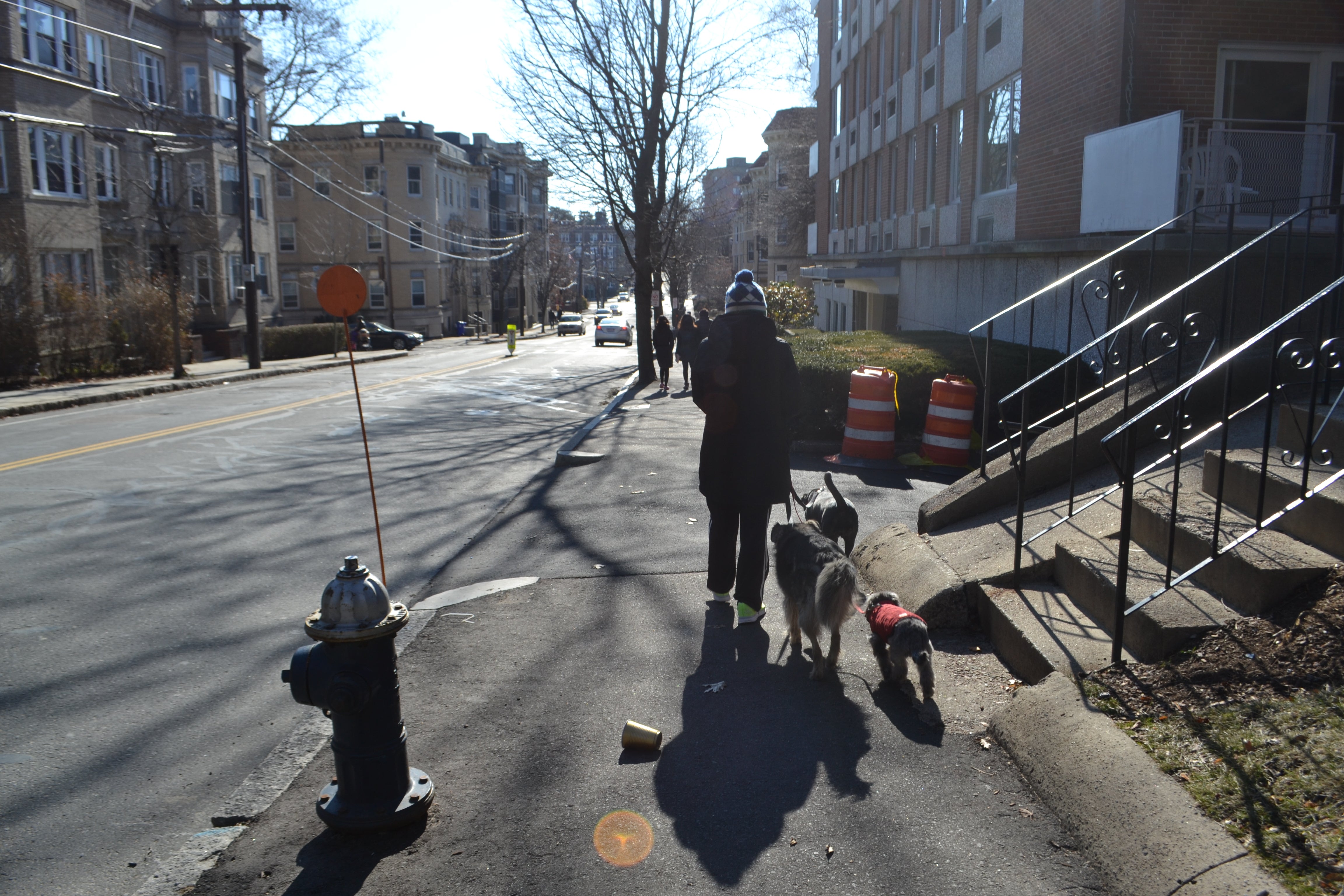 Robyn White only walks about three dogs at a time throughout Brookline for safety reasons.

Robyn said that walking dogs is obviously fun, but it’s important to remember “you also have a business to run,’’ which involves scheduling and a lot of bookkeeping.

They have about 45 to 50 dog clients and about 10 to 15 cats, walking about 25 to 30 a day between the two of them. (Yes, cats need exercise, too.) They also do house -sitting for their regular clients if a family goes out of town.

They have thought about expanding, but they like to be personally involved.

“We didn’t get into it for the money,’’ she said. “I love being out with the dogs and I don’t want to be in an office all day.’’

Because Robyn and Jeff can’t be with Lulu for the entire day when they’re out walking other dogs, they have a webcam set up so they can check in on her. Robyn took out her phone and watched Lulu sit, looking out the window. “She’s sitting there looking for us,’’ Robyn said.

At the end of each walk, which ranges from 30 minutes to an hour, Robyn and Jeff leave a note for their clients telling them how their dog was on the walk and what time the walk ended.

“We have to take care of our two-legged clients as well,’’ Robyn said.

After writing the note, Robyn gives the dog a treat, if the owner allows.

“Bye Boo, see you Monday!’’ Robyn said, as she delivered Pearl to her home.