Local officials and community leaders are mourning the death of Mimi Jones, a veteran of the civil rights movement who lived in Roxbury.

Jones was 17 years old when she joined other activists in a “swim-in” at a whites-only pool in St. Augustine, Florida on June 18, 1964 to protest segregation. A photo taken at the protest captured Jones in the pool as the owner of the motel poured acid into the water behind her.

“It is as fresh in my mind as the morning dew, because when the acid was poured in the pool, the water began to bubble up,” Jones told WBUR in 2017. “It all happened so quickly. So after I started to scream, then I see this fully-clothed policeman jumping into the pool, over our heads.”

The policeman wasn’t leaping into the pool to help the protesters but to arrest them. 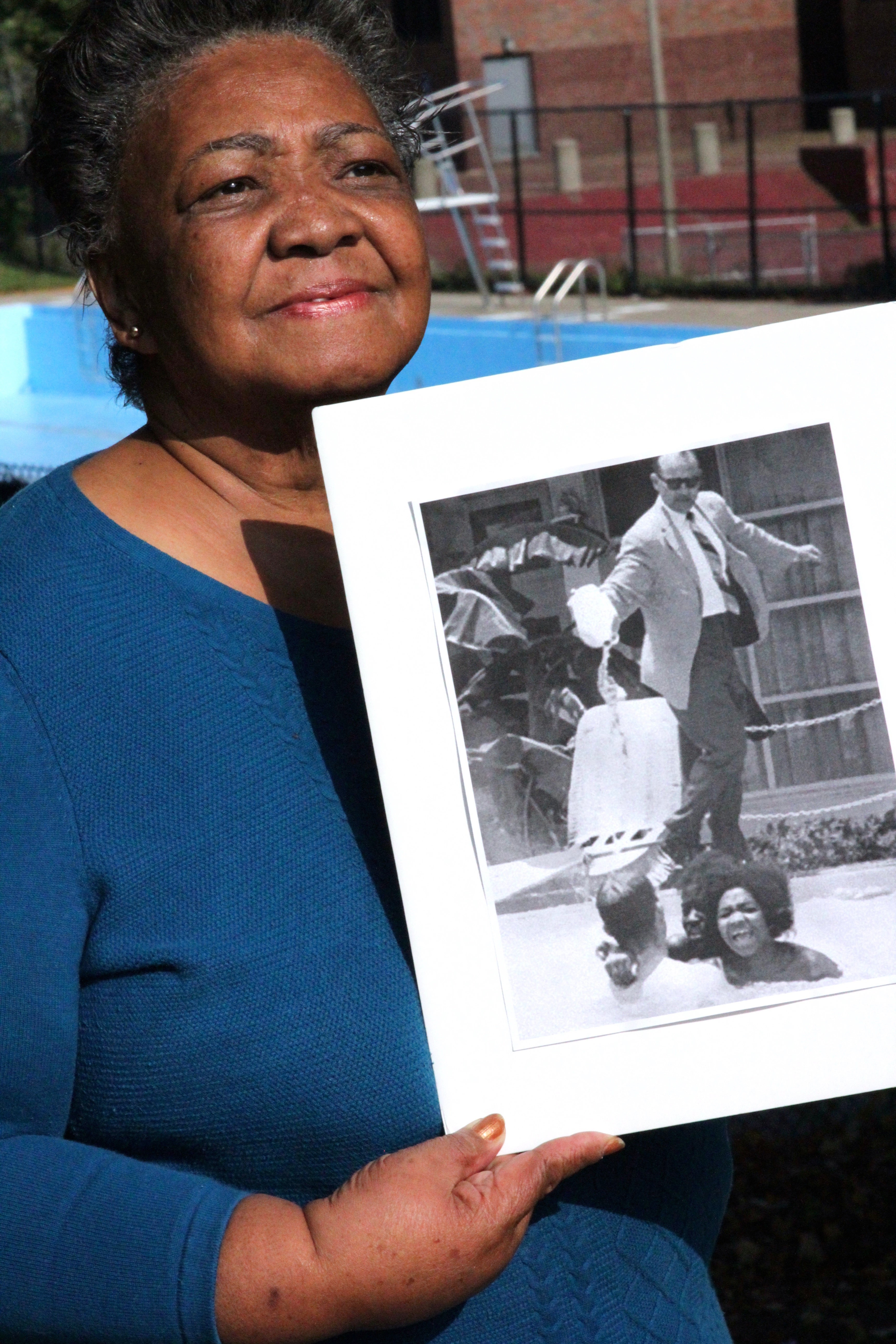 Mimi Jones in 2017, standing in front of the pool in Malcolm X Park in Roxbury. She is holding an iconic photo of the Monson Motor Lodge manager pouring acid into the pool when she and other civil rights activists were holding a swim-in protest at the St. Augustine, Fla., motel on June 18, 1964.

Photos of the demonstrations — including the one showing Jones screaming with the manager emptying the acid into the pool behind her — became iconic, circulating around the world. It was one of the events that led to President Lyndon B. Johnson signing the Civil Rights Act of 1964, according to WGBH.

“My commitment to social justice and being an activist before I went to St. Augustine had already been molded and crafted and shaped,” Jones told the outlet in 2017. “St. Augustine was just another one of the stations on the journey.”

Filmmaker Clennon King, who made a documentary in 2017 about the civil rights movement in St. Augustine titled “Passage at St. Augustine,” shared the news of Jones’s passing on Sunday.

“It’s with heavy heart that I share that another giant of the Civil Rights Movement has joined the Ancestors,” he wrote. “Mimi ‘Mamie Nell Ford’ Jones of Roxbury received her wings this morning … Mimi was my friend, co-collaborator and a key warrior in the fight for the passage of the landmark Civil Rights Act of ’64, desegregating the U.S. from coast to coast.”

“Here’s hoping Boston celebrates her as one of the City’s great treasures,” he added later.

It’s with heavy heart that I share that another giant of the Civil Rights Movement has joined the Ancestors. Mimi “Mamie…

According to the Boston Globe, Jones was 73 years old.

As news of her passing spread, tributes to Jones from local officials and community members poured in.

In a statement, Mayor Marty Walsh called the Roxbury resident a true champion for civil rights.

“As our country continues to address systemic racism, we must remember and honor individuals like Mimi who spent their lives fighting for justice and equality,” he wrote.

As our country continues to address systemic racism, we must remember and honor individuals like Mimi who spent their lives fighting for justice and equality. Rest In Peace, Mimi. -MJW

“Mimi showed me so much love, spoke so much wisdom into me and lovingly mentored me,” former Boston City Councilor Tito Jackson wrote on Facebook. “We lost an amazing leader, spirit and elder. Mimi, I am grateful for your investment in our country, community and freedom. Rest In Power.”

State Rep. Liz Miranda called the civil rights activist a “Roxbury legend” and issued a call to action for continuing the work she was involved in.

“We must further the work of sheroes like Mimi Jones,” Miranda wrote. “Racism lives in every sector of society. We must call it by its name, work to root it out and as a legislator, legislate our bad policies & laws in our state in hopes it causes a rumble across our country.”

Mimi was one of the leaders in that movement.

We must act . We must respond. We must further the work of sheroes like Mimi Jones. Racism lives in every sector of society. We must call it by its name , work to root it out and as a legislator , legislate our bad policies & laws in our state in hopes it causes a rumble across

In a 2017 interview with WGBH, Jones said she missed “the movement” and said that activism on social media didn’t “equate with direct grassroots organizing.”

“I think we’re going backwards, I do, and in many instances I think it’s worse,” she said. “Let’s behave as if we live in a democracy. And this constitution and this country that you say you love so much and you’re so dedicated to should not just be for white folks, it should be for all.”