Plump, juicy scallops are one of the most popular seafoods in the United States, with millions sold annually at prices that can top $15 a pound.

But consumers routinely pay for excess water when they buy the shellfish, according to a Boston Globe investigation of moisture content in scallops collected from 21 Massachusetts supermarkets.

The results revealed that some products sold as pure scallops — meaning they were not processed with additives to soak up moisture — contained water levels far exceeding industry standards. Seafood specialists say the findings suggest many scallops include such additives, but are packaged without any labeling to indicate the treatments.

Scallops are about 75 percent water when they are harvested from the ocean. But some brands appear to add more water, making customers pay for it instead of scallop meat.

For example, Target’s “wild caught all natural sea scallops’’ were 85 percent water, while New England Wild Jumbo Scallops at Trader Joe’s were 86 percent water, according to Globe testing conducted by an independent lab.

Looked at another way, the proportion of meat in these store-bought shellfish was about 40 percent less than in scallops pulled from the ocean.

Target Corp. said its scallops have no additives, and Trader Joe’s said it requires vendors to provide scallops that are not treated and are less than 83 percent water.

“We will be investigating this issue further, and if any of our suppliers are not meeting our quality standards, immediate action will be taken to rectify the situation,’’ said Alison Mochizuki, a spokeswoman for Trader Joe’s, a national grocery chain.

Some countries don’t permit water-added scallops to be sold. In Canada, for instance, scallops cannot have moisture content above 81 percent.

But the amount of water a natural scallop can contain has been debated here for years. The Food and Drug Administration, which oversees seafood labeling, once required scallops with more than 80 percent water to be labeled as “moisture added,” and those with more than 84 percent water were deemed not suitable for sale.

The agency rescinded that policy in 2004 and now simply requires additives to be listed on labels. But the National Oceanic and Atmospheric Administration, which conducts a voluntary seafood inspection program, decided to keep part of the guidelines abandoned by the FDA because of concerns over economic fraud.

Inspectors, according to NOAA’s handbook, are to assume that scallops with more than 83 percent moisture have been treated and should be properly labeled. NOAA said it expects to lower the permitted moisture level.

“Businesses are advertising wild-caught, naturally raised seafood that has really been treated and consumers are being misled and paying for water they shouldn’t,’’ said Beth Lowell of Oceana, a nonprofit group that combats seafood fraud.

For decades, American scallop processors, many of which are in New Bedford, soaked scallops in sodium tripolyphosphate (STPP), a solution that can help them retain moisture and preserve the products.

But consumer concerns about chemicals and a desire for all-natural products have led processors to seek alternatives that don’t use phosphates and can’t be as easily detected. Some scallop facilities employ full-time chemists who use various water-retention additives, adjusting the recipes for different retailers, according to industry officials. Regardless, any additives should be noted on the labeling.

Target could not explain how its all-natural scallops, which sold for $14.99 a pound in Westborough, tested as 85 percent water. Erin Conroy, a spokeswoman for the chain, would not identify Target’s supplier, but said its scallops do not contain additives.

“That’s a tremendous amount of water, and moisture content that high is an indication that there has been an additive involved,’’ said Laura Foley Ramsden, co-owner of Foley Fish, which supplies only all-natural, no-additive scallops to restaurants and supermarkets. The scallops it sells are typically landed with 77 percent water.

The Village Market in Roslindale was the only supermarket that admitted to selling fresh scallops treated to retain moisture, and they had a water content of 79 percent. Others, like the fresh sea scallops at Kam Man in Dorchester, were made up of 85 percent moisture, according to UL-STR, the independent lab in Canton that tested for the Globe.

The packaging of four frozen scallops tested by the Globe listed the use of STPP. This soaking agent was not detected in other scallops with moisture content above 83 percent. Several industry specialists raised concerns about the water- added scallops because two of them had less than 10 percent meat. Some were purchased at Kam Man in Dorchester and others came from a Walmart in Worcester.

The $5.98 bag of bay scallops at Walmart, distributed by Eastern Fisheries in New Bedford, had the highest moisture content of the samples tested by the Globe: 91 percent. Eastern Fisheries, which handles approximately 20 million pounds of scallops each year, according to the company’s website, declined comment.

There are some signs that suggest scallops may have been treated: Excess water leaches out when cooked, discolorations can appear on seafood, and the shellfish do not sear as well as they should. But it’s essentially impossible to detect when scallops are in a package or behind the seafood counter.

Dianna Gee, a Walmart corporate spokeswoman, said both the Walmart and Sam’s Club chains require suppliers to comply with regulatory standards. (Scallops tested from Sam’s Club had 86 percent
water content). Gee said the company contacted vendors about the Globe results and hired an independent lab to go out to stores and randomly test products the newspaper identified. “It is our expectation that our customers are getting the value they deserve,’’ Gee said. “So if our testing results indicate otherwise, we will take the appropriate action.’’

William Woo, of Kam Man, a regional Asian grocery chain, said the company is concerned by the Globe’s results. “We don’t want our consumers to be shortchanged,’’ Woo said.

UL-STR, which is registered with the FDA, conducted moisture testing on scallops at its Canton lab based on industry standards. The process involves thawing and draining the scallops, then placing them in a specialized oven. Hot air is forced into the oven to dry moisture until a constant weight is achieved.

The US scallop industry is estimated to be a $1 billion business annually, with many of the largest processors located in New Bedford. Some of these companies came under scrutiny for selling underweight seafood several years ago. At the time, the American Scallop Association promised it would launch a self-policing program.

Ross Paasche, the association president, said that effort never took off. “We talked about some type of inspection but it didn’t seem viable to have competitors walk into competitors’ plants,’’ he said.

Paasche said natural scallops should have a moisture content below 83 percent, and those with higher levels should be labeled as water-added.

John Sackton, publisher of Seafoodnews.com, an online industry newsletter, said moisture-retaining agents do serve a legitimate purpose, to prevent fish from losing liquid as it thaws, but the process also makes a huge price difference.

“You can reduce cost by 25 percent by adding a few percent water,’’ Sackton said. “The problem is there is a fine line between doing that at a relatively insignificant level to protect quality and going way beyond that to sell more water.’’ 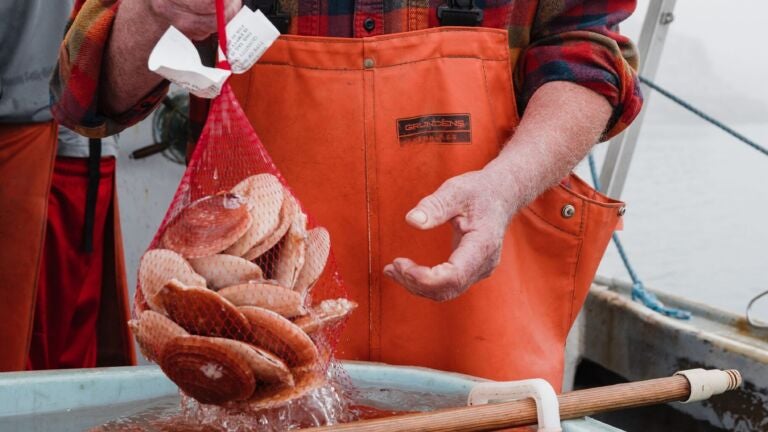