Jill Warnick is having a streak of bad luck.

All six of the Brookline hedgehog breeder’s baby hedgehogs – three litters’ worth – died. And their deaths were nothing short of macabre.

“One mother abandoned her babies,’’ Warnick says from the living room of her Brookline apartment. Those babies died.

Then, in a disturbing but apparently commonplace phenomenon, the other two mothers… ate their own babies. 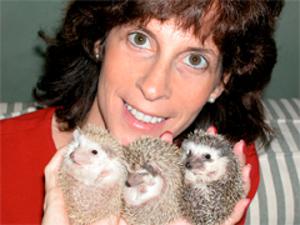 Warnick shakes her head, her dark, feathered hair swinging from side to side. She leans back. Hedgehog babies look like embryos, she says: pink fleshy things with little white quills, unable to see or move much.

“Babies have a high mortality rate,’’ says Warnick, a 53-year-old dental hygienist. “But you never really get used to it.’’

Dash and Dot, Warnick’s two favorite hedgehogs, sit on the floor, but can’t be seen because it’s daylight. Hedgehogs are nocturnal. Warnick says they’re asleep inside a tiny green igloo that rests in a clear plastic container with no lid. There’s no movement or noise from the igloo. Some of Warnick’s other hedgehogs–Cookie, Lola, Laser, Muffin, and Hot Dog–sleep nearby.

“I love animals,’’ Warnick says. On a glass stand is a sea of hedgehog memorabilia. There are delicate glass hedgehog figurines, no bigger than pink rubber erasers. There are stuffed animal hedgehogs. Porcelain hedgehogs. Plastic hedgehogs.

Warnick is not alone in her love for the prickly creatures.

Roughly 40,000 households in the US have a hedgehog. Social media sites like Instagram, Facebook and Pinterest have vastly increased hedgies’ popularity. “Biddythehedgehog,’’ a 3-year-old African Pygmy, has 540,000 followers on Instagram. In some pictures, Biddy wears tiny witch hats and firefighter helmets. He accepts fan mail.

“I think it was ’94,’’ Warnick says, reminiscing about her first “hedgie’’ encounter. “I was at a pet expo in Boston near UMass and they were having a raffle. A couple of breeders from Florida were doing it, and sure enough, I won. I would have just had to pay for shipping, but they weren’t legal.’’

African pygmy hedgehogs were banned because state officials worried that if released into the wild, hedgehogs would disrupt the balance of the ecosystem. Plus, they can carry diseases like salmonella and foot-and-mouth disease, according to the Centers for Disease Control and Prevention. Hedgehogs are still illegal in Arizona, California, Georgia, Hawaii, Maine, Pennsylvania, Washington, D.C. and the five boroughs of New York City.

The following year, however, Massachusetts lifted the ban, and Warnick found a breeder in Texas who would send six to her. She figured she’d pick the friendliest one and ship the rest back.

“They were all bouncing and hissing,’’ Warnick says. She laughs. “And I’m like, ‘Just what have I gotten myself into?’’’

Turns out, the friendliest of the six hedgehogs—it actually approached her!—was pregnant. The hedgehog had two more pink wriggling babies. Warnick saw just how cute babies were. “They were so fun to hold and cuddle,’’ Warnick says, clasping her hands to her chest and squeezing her eyes shut. It was then, she says, that she jumped on the breeding train. Today Warnick has a list of about 500 people waiting for one of her hedgehog babies.

But Warnick quickly learned that hedgies have a dark side: mother hedgehogs might eat their babies when frightened–and hedgehogs get frightened very easily.

In their wild natural habitat—in Europe, Asia and Africa—hedgehogs are frightened by approaching predators. As nocturnal creatures, they have weak eyesight, so they rely on scents and sounds, and when they feel threatened—which is often—they curl into a ball and stiffen their coat of sharp spines.

In captivity, however, it seems like almost anything could frighten a hedgehog.

“You have to understand that this animal is relatively new here—they’ve only been here about 25 years or so, and they have the instinct to do this…You see this with rabbits, gorillas, hamsters. It could have been the gardeners with their leaf-blowers outside,’’ Warnick says. She shrugs. “Or maybe my neighbors had some children over.’’

Pet hedgehogs are finicky, to say the least.

Warnick says if they aren’t socialized properly from the moment they’re born, hedgies will be terrified of humans.

“They will never come running to you or lick your face,’’ Warnick says. “But they are more interactive than a hamster.’’

They’re low maintenance, she adds. You don’t have to get them vaccinated at annual vet check-ups. Hedgehogs don’t need much food or attention. But there are drawbacks, besides the whole cannibalism thing.

They’re solitary creatures, so you should have no other pets (although Warnick does). They eat dry cat food in captivity, so they’re predisposed to obesity. Buy a wheel. Because they can carry salmonella, you should always wash your hands after holding them.

“People will see how cute they are, and say, ‘Oh, I have to get one of those for my girlfriend,’ and they aren’t educated about them,’’ Warnick says, sighing. She made an educational video for potential customers, which she distributes for free at her hedgehog “Meet N’ Greets’’—opportunities for people to play with Warnick’s hedgies before buying their own.

Losing the six babies made her sad, but Warnick says that, financially, it doesn’t matter. She says she’s a small-time breeder who barely breaks even between vet bills, food, and the babies’ high mortality. She does it for fun. She knows the risks are high. Warnick says she will breed her three females again in December, and charge around $300 per baby if they make it through the winter.

Finally, Warnick pulls the plastic igloo off Dash and Dot.

The two bristly creatures slowly look upward, their glassy black eyes blinking under the overhead lights. “Oh, come on, you two,’’ Warnick says. “Someone has a case of the grumpies!’’ She gingerly places her hand on Dash’s quills. The female hedgehog hisses, then jumps. “You just got to warm them up,’’ Warnick says.

Cupping Dash in her hands, she turns the hedgie over on her back. She blows softly on Dash’s face. Dash tucks into herself, disappearing in a ball of spines. She slowly emerges, nose-first.

“This is what I have to do to take cute pictures of them,’’ Warnick says, then sets the hedgehog on my lap.

Dash bristles, then scampers to the edge of the couch. 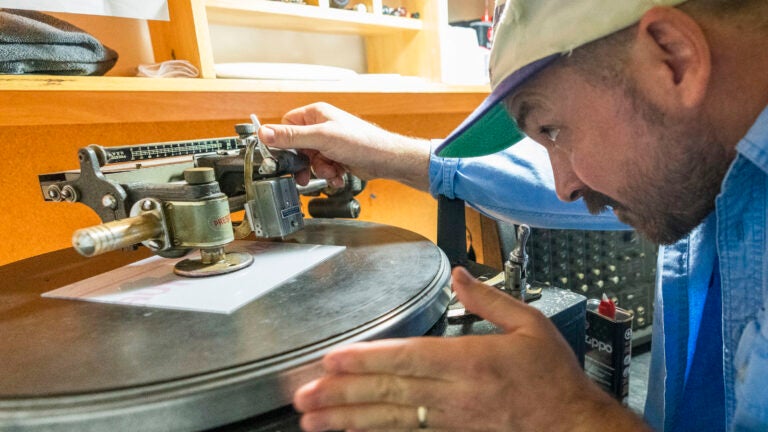