Between picking apples, Instagraming foliage, and guzzling pumpkin-spice lattes, it’s perfectly understandable if Halloween preparation may have slipped your mind. Or maybe, like us, you’re just extremely lazy.

But extreme laziness and extreme creativity are not mutually exclusive. A genuine Bostonian stays true to where he comes from and his Halloween costume is a moment to show off that Boston knowledge.

So flaunt it, Boston. We approve.

Need help brainstorming the most Boston costumes? Don’t worry, we have you covered.

Guys, bust out those Brady jerseys. Ladies, grab your highest heels, cutest dress, and some angel wings. Get ready to be the most attractive couple at the party.

The summer of Market Basket is one we will never forget. Honor Artie T. one more time by busting back out those picket signs and demanding Market Basket products at a Halloween party near you.

Lines of the MBTA

For this you need a group of at least five people. Everyone dresses in a different color of the MBTA lines: red, green, orange, blue, and purple. Draw the MBTA “T’’ with the circle around it on the front of your shirt. If you are the Green line, be sure to walk extra slow. Party stops at 1 a.m.

Wear a shirt with the Jamaican flag or the colors of the flag: green, black and yellow. Wear an emerald necklace (the bigger the better) and throw on some running sneakers. You’ll probably have to explain your costume the entire night, but that’s okay because you’ll seem like the cleverest Bostonian around.

Write the word “Party’’ on a white T-shirt with the date “1773’’ on the back. Carry around a teacup. Boom. Costume. You’re welcome. Want to get even more political? Get yourself a “Hi, my name is Mark Fisher’’ sticker. Now those Halloween lovers will get off your back.

You can go two ways with this costume. For the devoted, get yourself a loose white collared shirt and brown suede vest. Don’t forget the wig. For the crafty, make yourself a Sam Adams beer box hat and wear your favorite Sam Adams T-shirt. Either way you’re a Boston icon AND you have a great reason to drink beer. Not that you need one.

Boston runs on Dunkin so why not honor them this Halloween? Dress up as a basketball player and put a giant inflatable tube decorated as a donut around your waist. Carry a basketball with you at all times so you can slam dunk into every trashcan and ice bucket. Bring a box of munchkins with you and there is no way you won’t be the hit of the party.

Put on that Red Sox gear that you threw in the back of your closet. Then grab yourself a flask and a piss-poor attitude and you’re ready to go! Wait, you are probably already wearing that costume anyway.

This is another great couple costume for the more politically minded. For Martha, you have to rock the turtleneck/blazer combo. For Charlie, it’s the “button-down and no tie’’ relaxed look. To make this costume really realistic, argue the entire time about which Halloween candy is best. Trying to do a family costume? Your kids would make the perfect independent candidates! “Now, now children. No fighting over who gets to be Scott Lively!’’

This is another true Bostonian costume. Dress in all yellow, with a pair of cardboard wings and a beak. Paint your face metallic bronze and now you’re everyone’s favorite statue.

Got some chef’s whites and a Wahlburger baseball cap? That is all you need. Mark and Donnie are great, but a true Bostonian would pick the local celebrity. Also you now have an excuse to eat hamburgers—not that you really need an excuse.

This is a costume for marathon die-hards. A long wig for Roger’s self acclaimed “hippie look.’’ A white t-shirt with “Boston GBIC’’ written in sharpie on the front. Pin the number 14 as a race bib on your shirt, lace up those running shoes and for one night hope you can run really fast! Make yourself a laurel wreath for the finishing touch.

Only the natives will understand your costume. You wouldn’t want it any other way because you’re Boston to the core. Tape a few clear trash bags together, get yourself a razor scooter, and don’t forget your helmet! Wicked pissah, man. 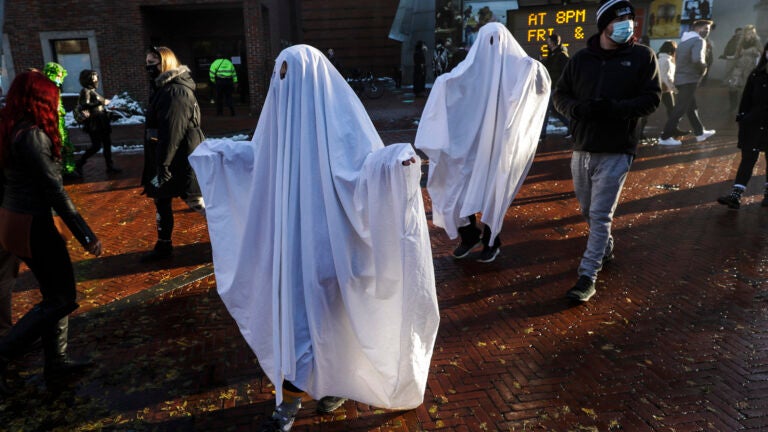