On Tuesday, the State Auditor’s office released the results of its audit of the Department of Public Safety. The elevator inspection division did not fare well:

• Thousands of elevators across the state haven’t had their annual inspections (about a third of them, according to the audit, though DPS says it’s more like a quarter).

• The majority of those elevator owners applied for the inspection in a timely fashion and paid the fee, only to get stuck in a backlog.

• DPS’s database isn’t accurate, making it pretty much impossible to gauge what progress, if any, the department has made in reducing that backlog in the first place.

DPS responded to the report by saying it is aware it has problems (or “room for improvement’’) and is working to fix them.

But the DPS doesn’t have the best track record in this regard. It’s been going on for years, and multiple audits have done little to change anything.

Over a decade ago, in June 2004, another state audit of the elevator division, conducted between 2000 and 2002, found basically the same issues.

Elevators weren’t being inspected in a timely fashion, either because inspectors weren’t getting to them before the certificates expired or because elevator owners weren’t applying for inspections in the first place. The latter was made much easier because the DPS didn’t have a system in place to keep track of when elevators were due for inspections, leaving it to rely “on the honor system’’ and trust the owners to follow the law (and pay the $100 inspection fee).

In its database, run by a Microsoft program called FoxPro, auditors found one elevator listed with an inspection certificate set to expire in 2022. Another was expiring in 2500. And two had expired in the 1960s. Oh, and the database listed 19 districts when there were only 17.

“DPS should immediately develop an improved system of elevator inspections to ensure that (1) elevators are inspected annually,’’ the audit said.

DPS responded then by saying it was aware of its issues but had and would continue to make “some substantial changes to our inspectional process in order to reduce the number of elevators that have not been inspected for long periods.’’ It also asked for more money to hire additional inspectors. 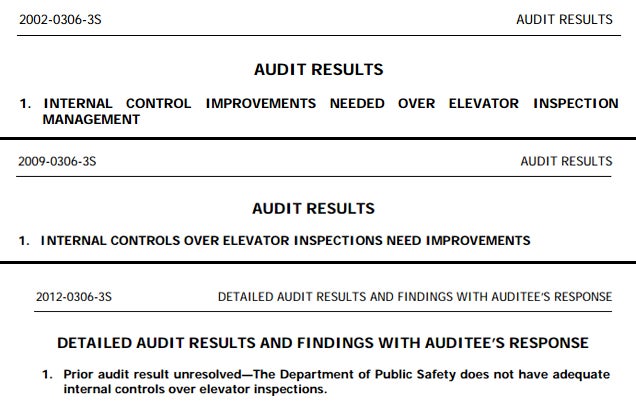 In 2010 there was another audit of the elevator division. It, too, found that the DPS “has not developed internal controls to ensure that elevator inspections are completed in a timely manner and before elevator inspection certificates expire.’’ The database was still run on FoxPro, which was “not up-to-date’’ and “lacks the capability of billing elevator owners for elevators requiring inspections.’’

DPS told the auditor that it would soon be obtaining a “new database management system’’ to replace FoxPro “by the end of 2010.’’ But according to the audit released on Tuesday (and conducted between 2010 and 2012), FoxPro was still the database software and it still hasn’t been updated. (DPS now says it expects to have a database “which will bring the Department into the 21st century’’ by the second quarter of fiscal year 2015.)

In the 2014 audit, as in the 2004 and 2010 audits, the office found that thousands of elevator owners had applied for inspections and paid the fee, but were still waiting for the inspections to take place. Thousands more hadn’t bothered to apply for inspections at all.

Unlike the previous audits, DPS had hired more inspectors to try to reduce the backlog—increasing inspectors on staff from 39 to 53 between July 2010 and June 2012. That doesn’t seem to have improved matters, though DPS says the 53 inspector figure is inaccurate. Only 47 were field inspectors, and 10 of those positions “were vacant at various times.’’ The department noted that it has been difficult to attract and keep inspectors when the private sector pays significantly more than DPS can. The department also said it needs at least 75 inspectors to keep up with demand. Paying for them is a budget issue that is out of DPS’s hands.

The DPS also blamed some of the backlog on the increase of elevators in the state and the “dramatic increase’’ in the number of reinspections. Elevators that fail an inspection must be reinspected within 90 days to make sure the violations have been addressed. That takes time and manpower away from annual inspections, contributing to the backlog. (Although you could argue that if all elevators were inspected annually in the first place, they might not have violations requiring reinspections now.) A $200 reinspection fee has now been put in place that the department believes will mitigate the loss of revenue.

All three audits noted that not only that this was a public safety issue but also that the Commonwealth was losing millions in potential inspection fees.

The same recommendations were made that have been made before. The DPS said it was working on its problems, just like it did before.

So, who will ensure that DPS actually follows through with its promises?

Not the State Auditor’s Office. A spokesperson told Boston.com that it doesn’t have any enforcement power. It’s up to the DPS to fix whatever problems the audit finds—if it has the budget and authority to do so. DPS Commissioner Thomas G. Gatzunis was not able to respond to request for comment before publication.

Perhaps our incoming governor will be able to fix this?

“Making sure public safety officials have the tools they need to do their jobs is important to Governor-elect [Charlie] Baker,’’ said Tim Buckley, Baker’s spokesman. “He looks forward to working with the Department of Public Safety to improve the inspection process.’’

He’ll have his hands full. This has been going on for quite a while.

That perception may stem from audits and investigations dating back to the 1980s. Audits of the elevator division prior to 2004 were not available on the auditor’s website, but a January 1995 article in The Boston Globe said the newspaper’s analysis of state inspection records found that 40 percent of them hadn’t been inspected in the last year.

Going further back, a September 1986 article in the Globe noted that, in yet another audit, the DPS was accused of failing to carry out inspections of “thousands of elevators,’’ resulting in a public safety threat as well as lost revenue. DPS responded then by pointing out that, despite the backlog, there had been a “very minimal number of accidents’’ and “very, very few fatalities.’’ So there’s that.

“The Department of Public Safety acknowledged the problems and said it is working to correct them,’’ the Globe said.