Chants of “Black lives matter’’ and “What do we want? Justice! When do we want it? Now!’’ echoed through the narrow streets of downtown Boston Monday, as protesters and activists marched from the Old State House to the African Meeting House.

Kiasja Dymond, the organizer of the event, said she was asked to do so by an out-of-state organization, Total Blackout For Reform, as part of the National 4-Mile March. The Coalition Against Police Violence also was a host of the event.

“We just need this injustice to end,’’ said Dymond. “We want this police brutality to stop. We need this system to change, where police are accountable for their actions. We just need change.’’ 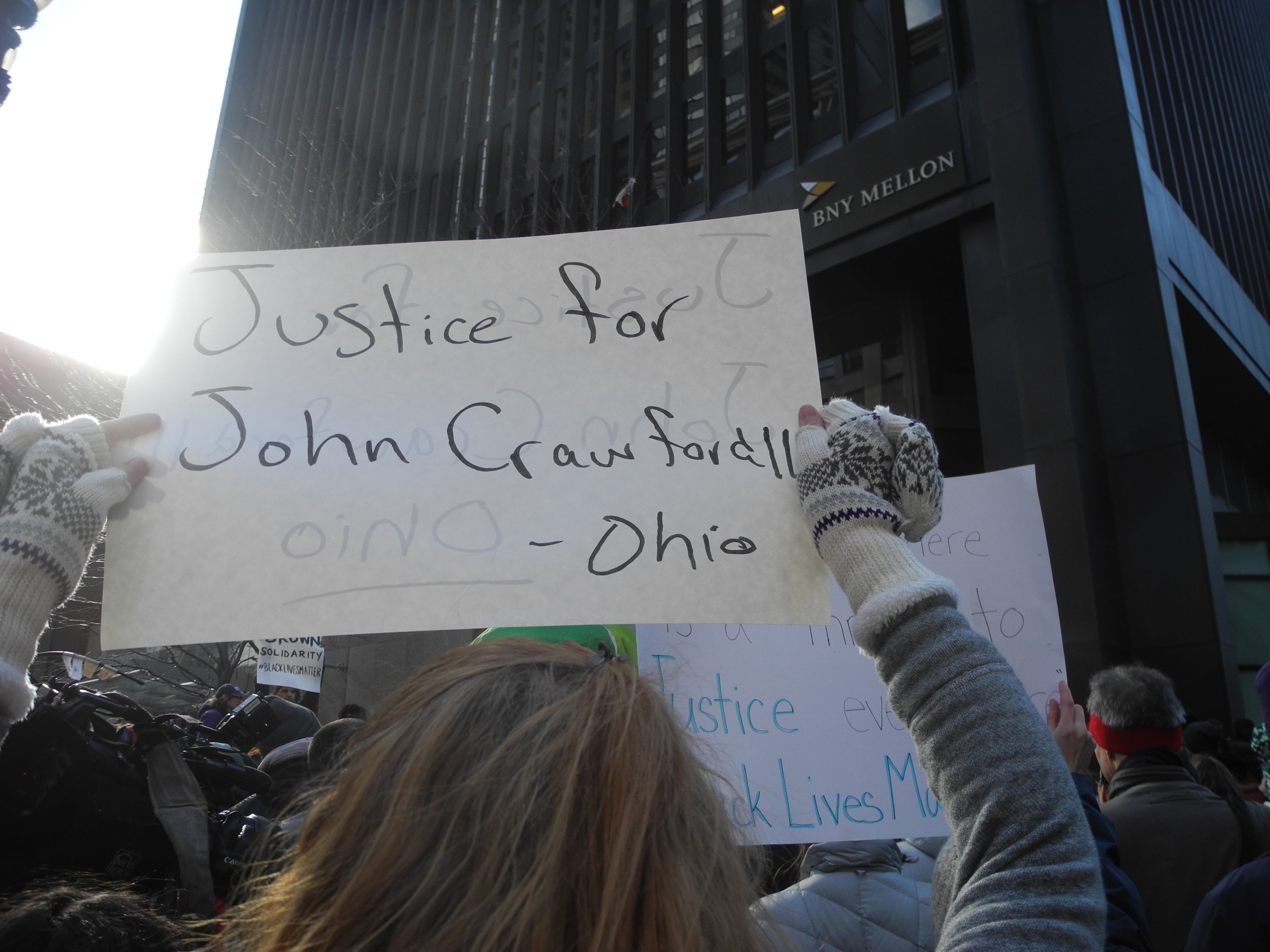 A protester waited for the march to begin.

The national event was promoted by the Coalition Against Police Violence, according to the national 4-Mile March website. The goal of the marches was to bring awareness to America’s “epidemic of racial profiling and police brutality,’’ as well as to “honor all those who have been injured or died as a result of police violence,’’ according to the website’s ‘About’ page.

Participants in the marches and die-ins were asked to wear the name of a person who died at the hands of law enforcement. Boston is one of about 29 cities across the country that participated in the Martin Luther King Jr. Day event.

The Boston Police Department was present as marchers of all ages gathered at the site of the Boston Massacre, near the Old State House. Superintendent Bernard O’Rourke said they were notified beforehand of the event and the route — marching up through downtown, with a loop around the Common and Public Garden.

“We have adequate resources here to facilitate the march,’’ O’Rourke told Boston.com. “We will assist them with traffic ‘etc.’ and let’s hope for a peaceful march.’’ 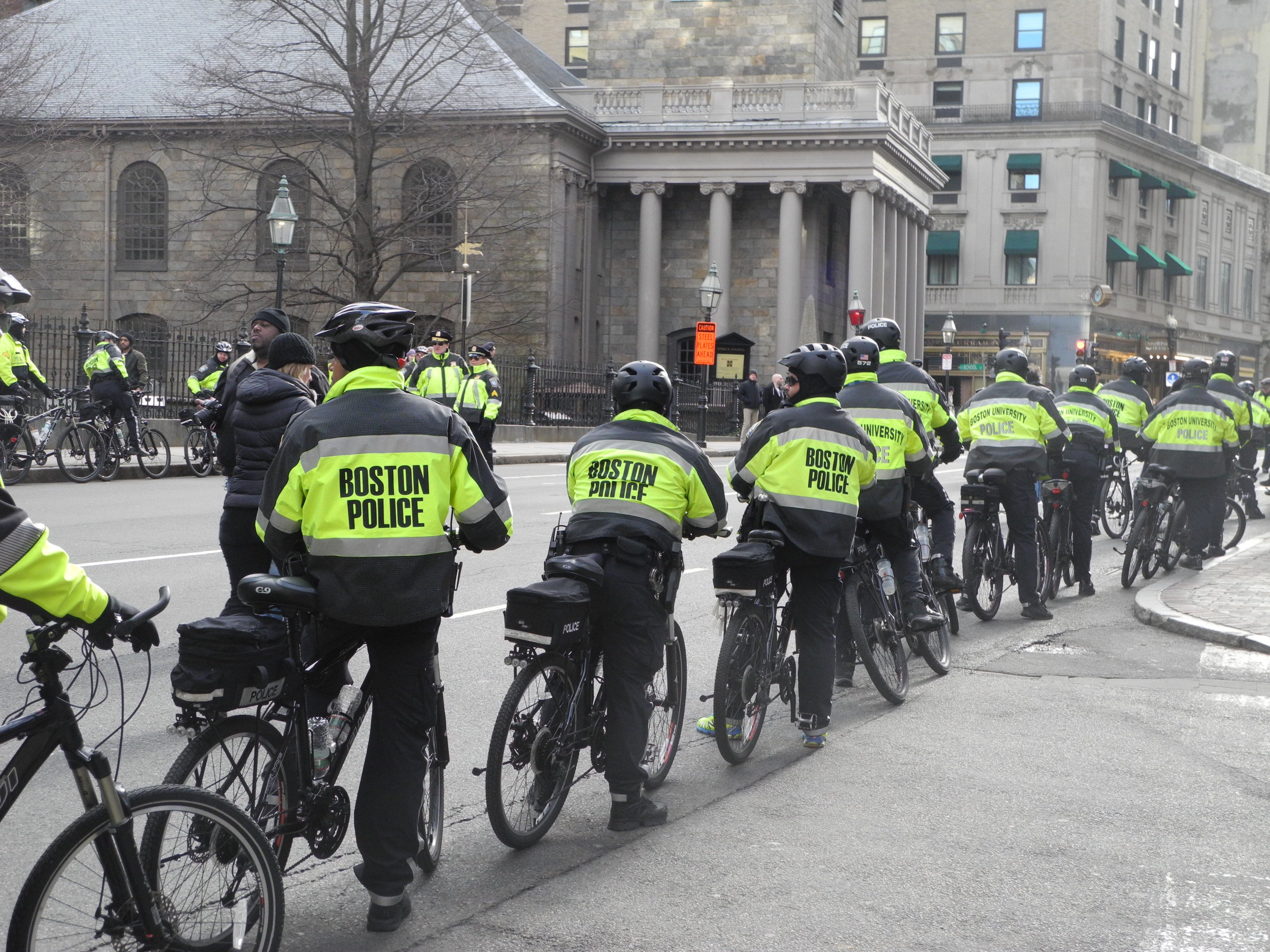 Boston Police waited for the march to start.

Marshalls for the march wore orange safety vests and flanked the protesters as they wended their way through downtown Boston.

Brock Satter, an organizer of the First Night Against Police Violence protests earlier this year, was present as a marshal and speaker for the event, leading chants as the group gathered.

“We want to have an orderly peaceful demonstration,’’ he said, emphasizing the importance of holding an event on Martin Luther King Jr. Day.

Satter said the event and its organizers were not affiliated with the group that caused disruptions to I-93 last week.

“We’re not planning to disrupt traffic,’’ Satter said. “We probably will block traffic as we march down the street, but this action is not designed to disrupt. It’s more just exercising our right to assemble.’’ 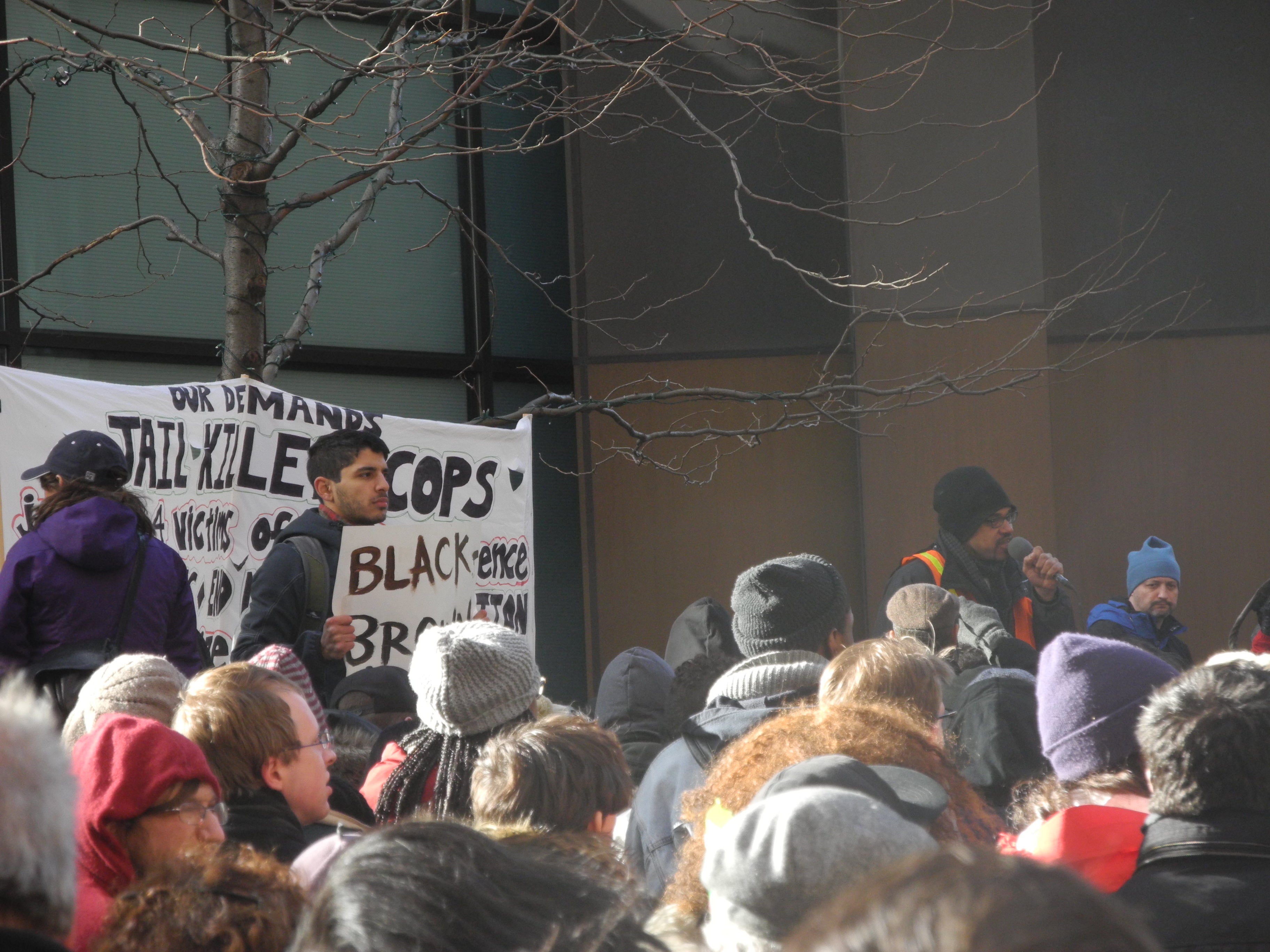 Brock Satter spoke to the crowd.

Satter said the group did seek permit for the event. He said they were told they did not request it in time, but that the policy of the city allowed them to march, “as long as they were orderly.’’

“People want to see change,’’ said Satter. “People thought they lived in a country that was supposed to be equal for all.’’ 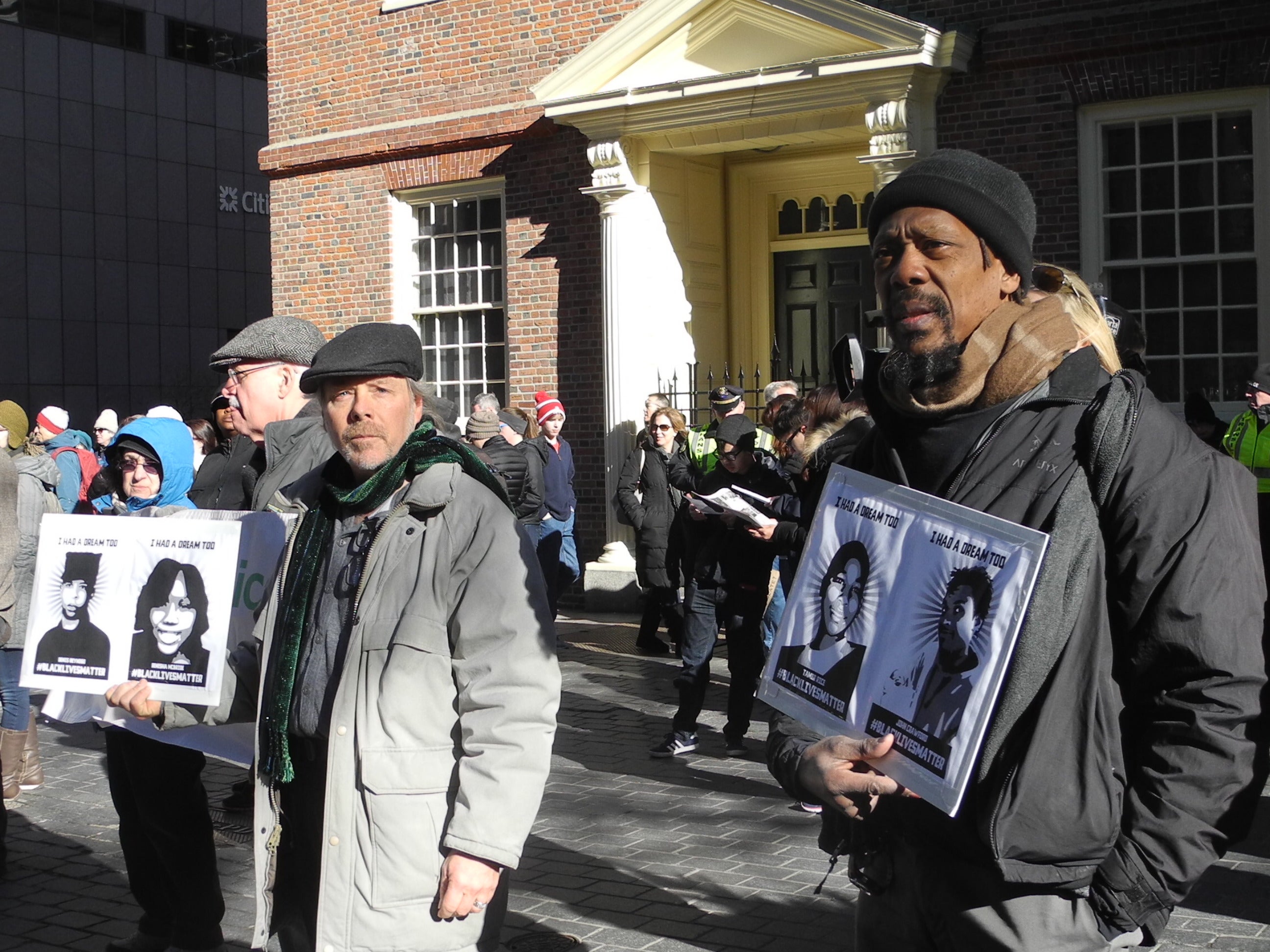 “I’m here because I’ve been seeing this stuff going since I was a little kid,’’ said Mark Jaquith. “I went to a segregated school in Tuscaloosa. Schools are as segregated now as they were back then. This stuff has to end, and if everybody takes care of their own patch, the patches will get taken care of.’’

“I’m opposed to the racialization of humanity,’’ said Ken Thomas. “And I think that America has been racialized since its inception and it’s a real big problem.’’ 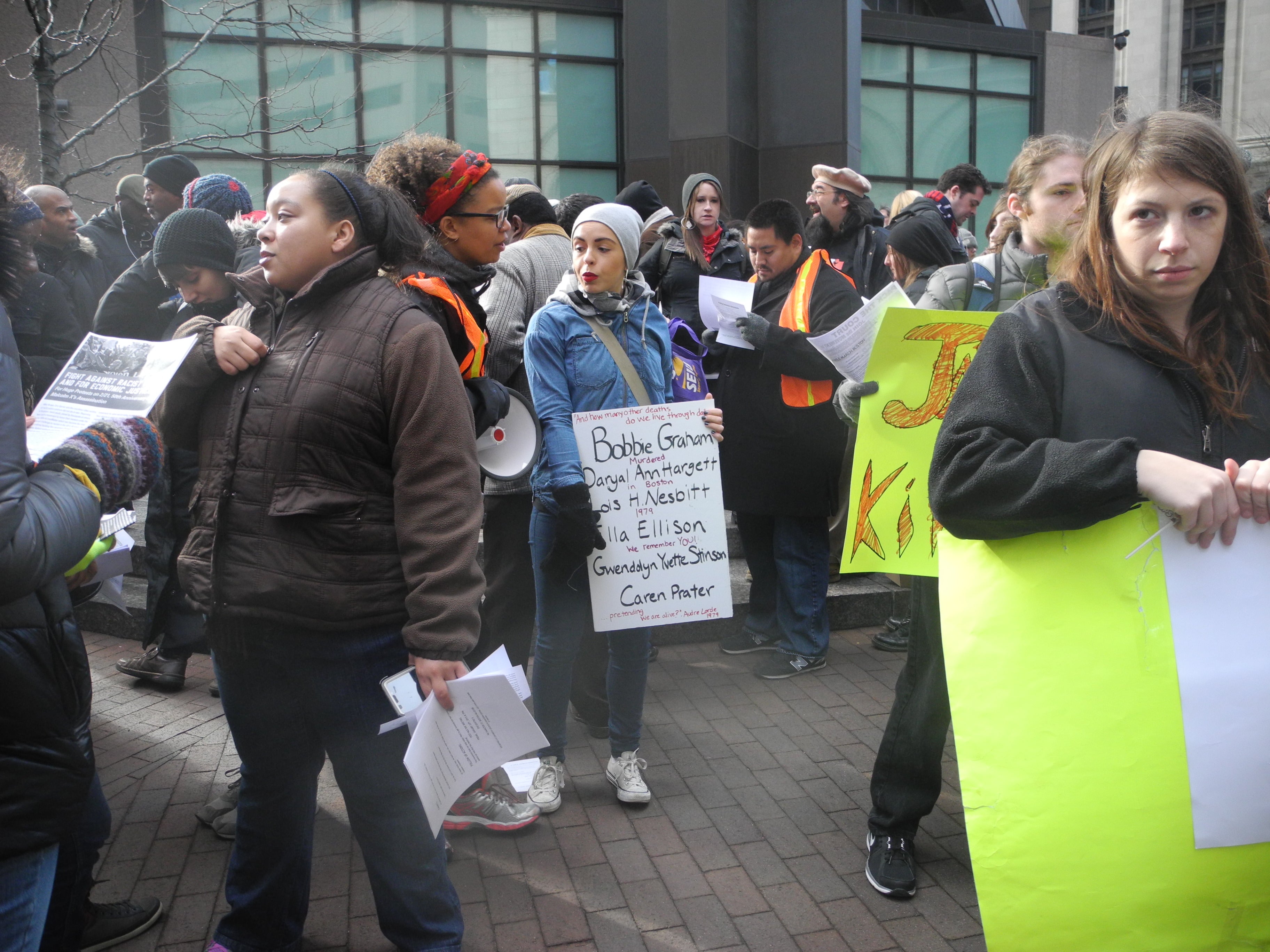 Brooke Murphy, a resident of Boston, carried a sign with the names of 12 black women killed in Boston in 1979.

“I thought it was very important in this kind of movement to talk about, specifically in Boston, about the racial injustice that occurred in the past, but also that can to occur today,’’ she said. 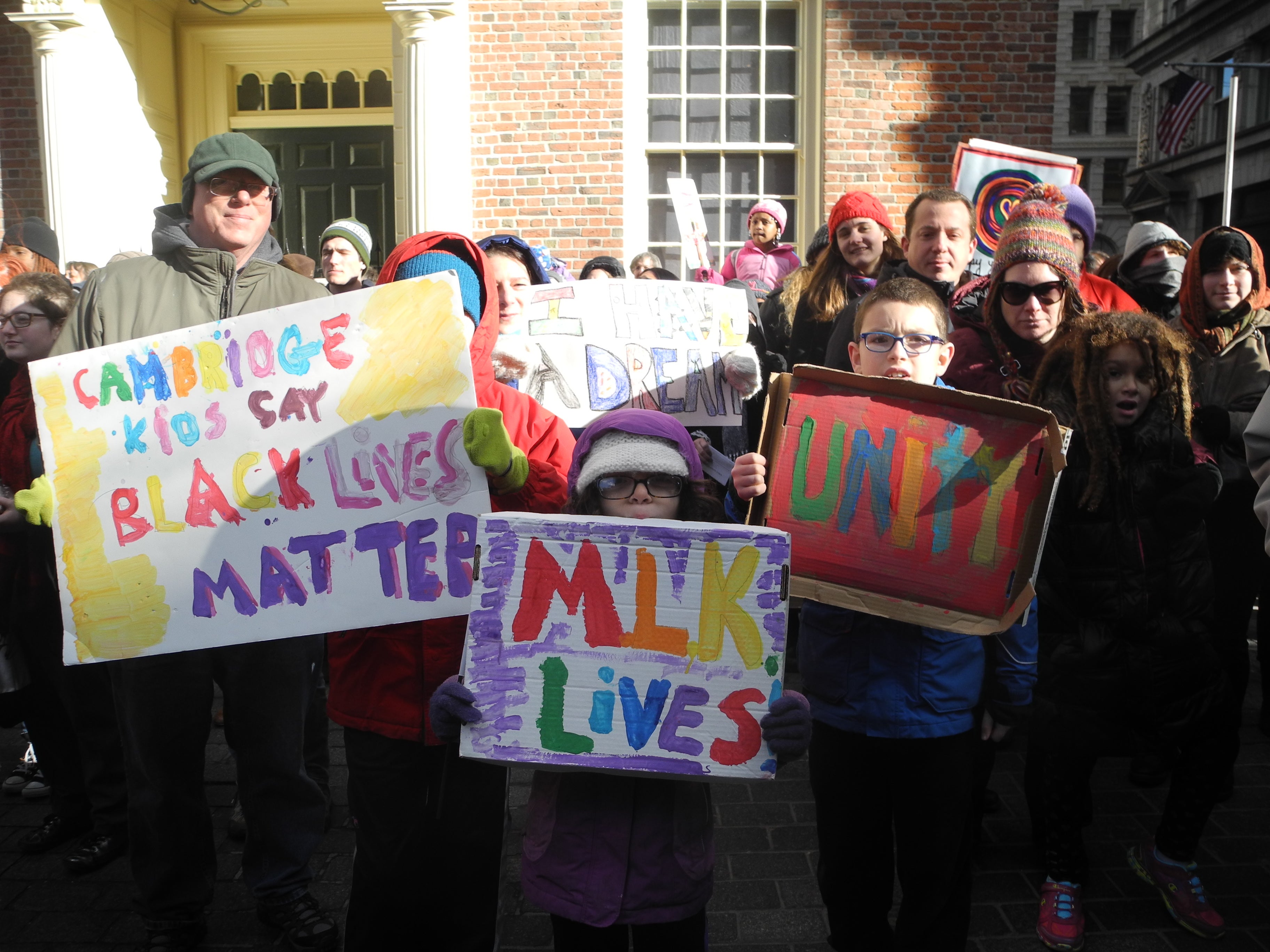 “It’s really important to be active and to show your kids that they can make a difference,’’ said Jayme Eich, who brought along her son Aiden, age 11.

Dan Wainstock said he felt it was important to be doing something on Martin Luther King Jr. Day and show his kids, Noah, 9, and Talia, 7, that “people care and are doing something.’’

“I’m here because my parents told me about the news stories where policemen were killing black people for almost no reason,’’ said Noah. “And I thought that was totally unreasonable. And then I heard their reasoning and it made a lot more sense to me but it was still completely unreasonable. And then they told me about this march, and I was like, we should do that march.’’ 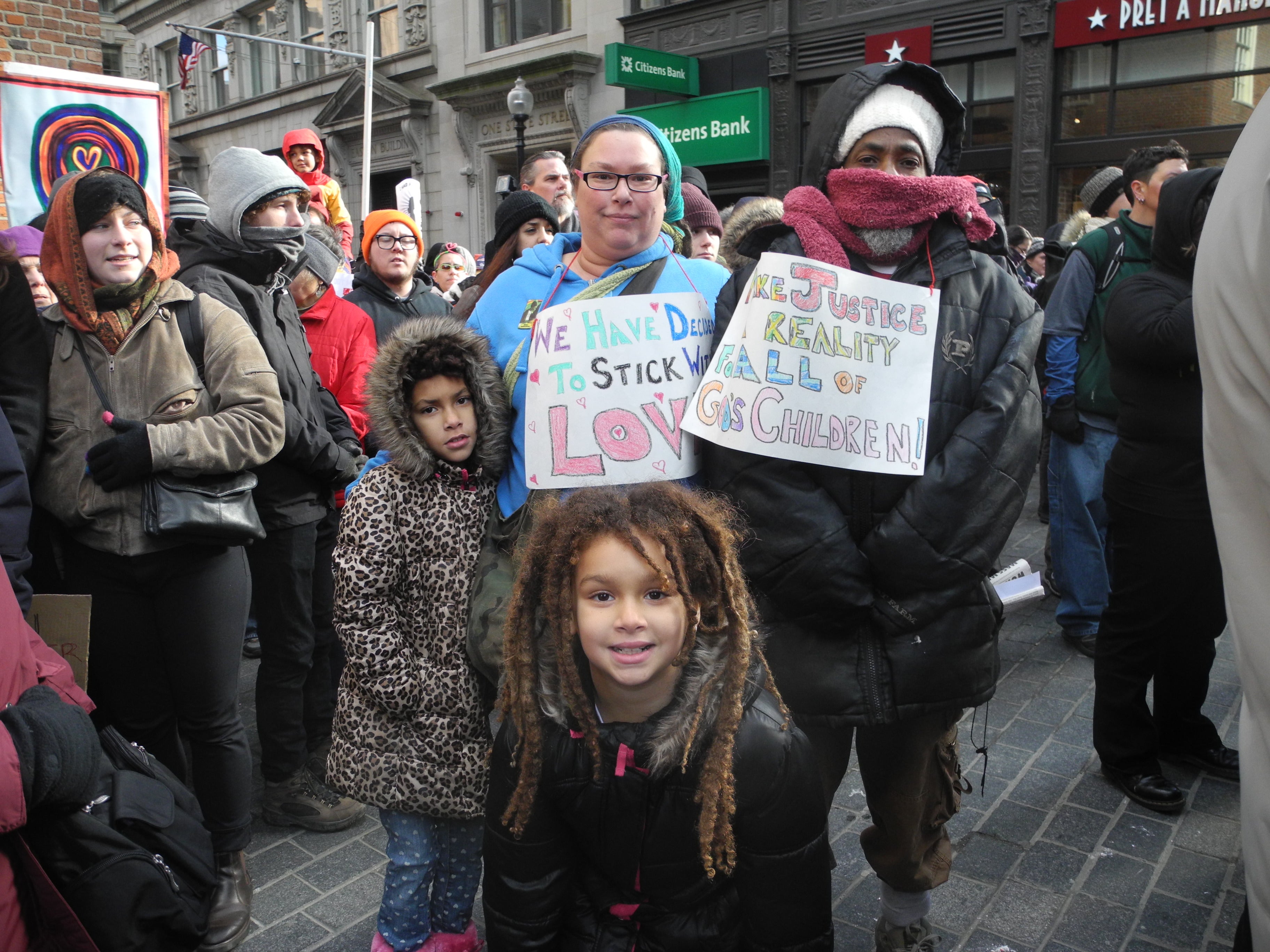 The Wainstocks stood close to their cousins, Naomi, 8, and Jeannie, 7, who also held signs.

“It’s an important thing that we raise awareness, because it’s a serious problem,’’ said Bamber. “People think that it’s become less of a problem. But it’s plain and clear to see that there’s still a problem within the United States, and the world really, with discrimination based on race or gender or sexuality and things which really shouldn’t be the case. It’s really disappointing.’’ 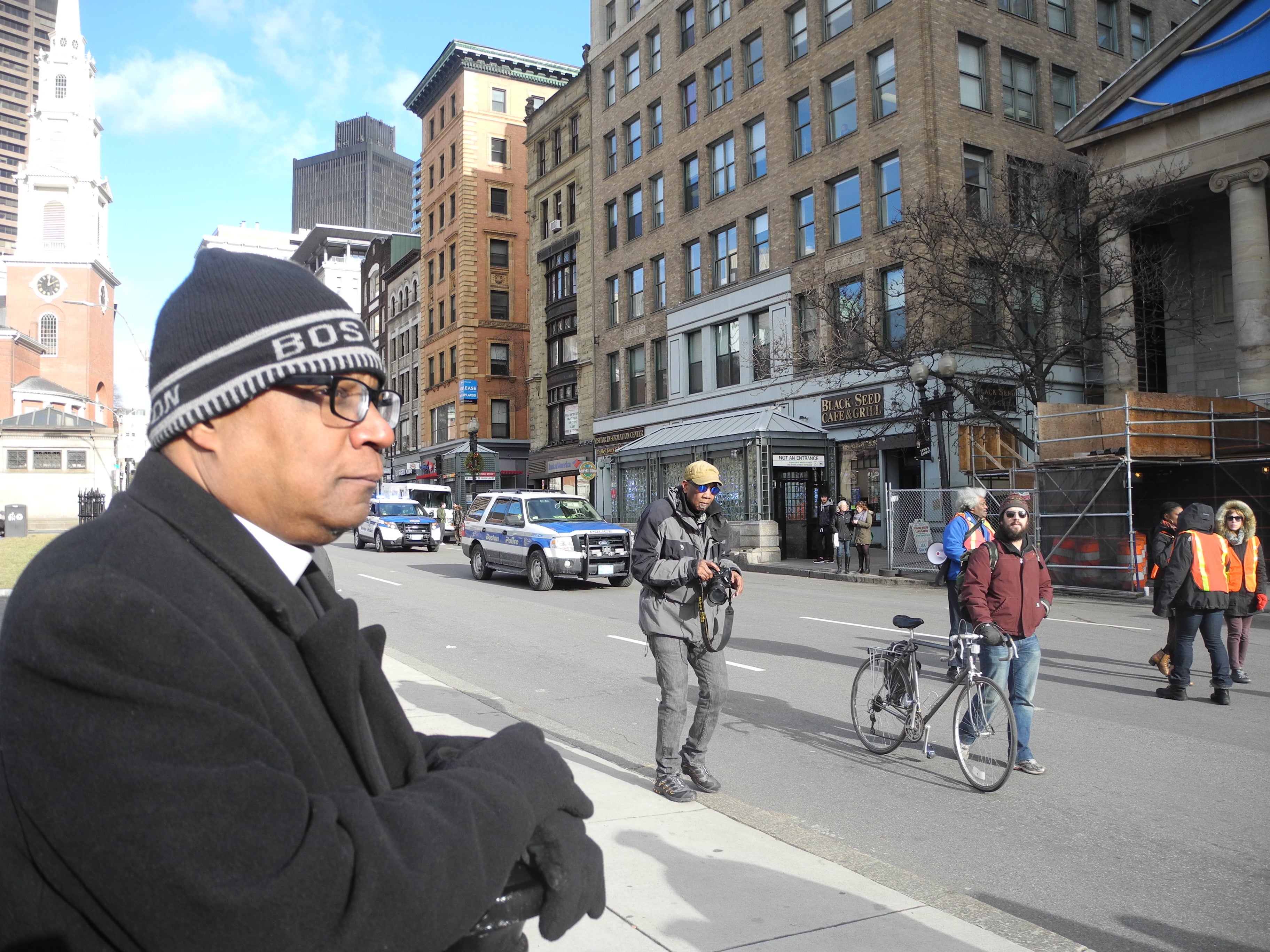 Reverand Mark V. Scott, associate pastor at the Azusa Christian Community in Dorchester, watched as the marchers made their way down Tremont Street. He said he had two concerns.

“One, to be very clear, it is possible for a community to have policing that is effective, that helps to establish order, that is not racist, that is not oppressive, that is not an occupying army,’’ he said. “And I think Boston Police Department has done a lot to accomplish that and demonstrate that that is actually possible. I know a lot the officers and in a lot of ways I’m here in support of them.’’

He said he believed protests could help people become less complacent, which he said is a good thing. But after the protests you have to get down to the real work working with young people and with the police, which he said has been done in Boston.

Correction: A previous version of this article stated Boston resident Brooke Murphy carried a sign with names of women killed by police. In fact, the sign depicted the names of 12 black women killed in Boston in 1979.