As Fenway Park welcomes the 2015 baseball season Monday, fans at the Red Sox home opener will hope their trip to the ballpark ends with that familiar refrain. The sharp chords, and then: “I’m gonna tell you a story. I’m gonna tell you about my town.’’

The Standells’ “Dirty Water’’ will only play, of course, if the Red Sox win. But if fans don’t hear it at the game, they won’t have to strain too hard to hear it somewhere else. It will be in a commercial on TV or the radio. It will likely play at the next major groundbreaking in town or at some local campaign event come election season. Or, if you go to a big rock concert at Fenway or the TD Garden, odds are decent that a band will cover it.

For a song whose lyrics declare several times over, “Boston, you’re my home,’’ it makes for a fun bit of trivia that the Los Angeles–based band had never even been to Boston when it first recorded “Dirty Water.’’ But Standells producer Ed Cobb had, and as the band’s co-founder Larry Tamblyn tells it, Cobb didn’t have a great experience.

“He never told us this directly, but the second-hand story is, evidently he was in Boston, and he was mugged, and that’s where he got the inspiration for the song,’’ he said.

Cobb originally wrote “Dirty Water’’ as a blues song. “We didn’t like it very much, to be honest with you,’’ Tamblyn said. When Cobb passed it along to The Standells, the band wrote new music for it (highlighted by the iconic guitar opening), and played around with some of the lyrics (such as by adding the introductory verse).

But many of the lyrics were Cobb’s, and his experience being muggedhelps to explain why the song points out faults of the city around the time it was written.

The titular dirty water refers to the filthy state of the Charles River at the time. The line about frustrated women who need to be indoors by midnight refers to style-cramping curfews at area colleges. According to the lyrics, Boston’s muggers and thieves are cool people. And so forth.

Regardless of Cobb’s intent—which would appear to be a sarcastic ode—the song was embraced. Tamblyn said that if the band received any negative Boston-based fan mail in reaction to the song, he is unaware of it.

Some see the song’s regional popularity as a sign of unconditional love for the city. “We knew the Charles River was dirty, but we still loved Boston,’’ said Donna Halper, a local historian whose work has included a book on the history of Boston radio.

Others think the embrace of the lyrics speaks to the region’s capacity for self-deprecation. “That’s the way Boston people are,’’ Tamblyn said. “They love Boston, but they’re not afraid to make light of it, too.’’

Or maybe it’s just the music. “It has a nice beat, and you can play air guitar to it,’’ said Paul Schlosberg, a longtime radio producer and executive in Boston.

“Dirty Water’’ was a hit across the country in the late ‘60s, eventually reaching No. 11 on the Billboard charts. Tamblyn recalled being surprised when the song caught on.

“It was recorded in 1965, but it didn’t hit the charts until 1966,’’ he said. “It started getting play in Orlando. It went toward the top of the charts there, and spread into Miami, and it slowly spread its way up the coast…. There was such a long lag between recording that we had forgotten it. We basically had to relearn it.’’ 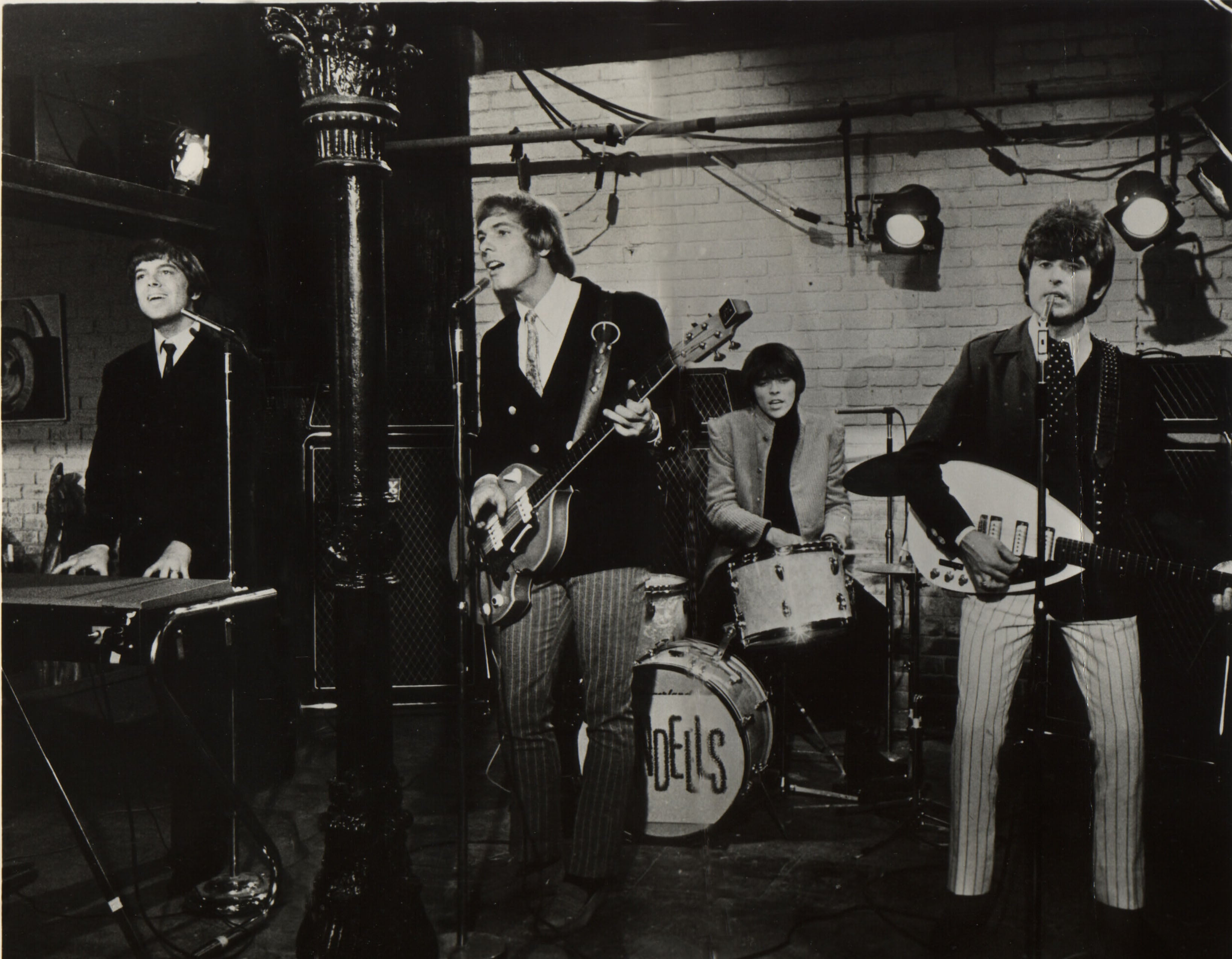 Halper, the historian, said that as the song took off nationally, it may have gotten a little extra play in Boston on its Top 40 stations. But she said that even locally, the song fell off after a couple of months, as Top 40 songs tended to do.

However, some people remember it beginning to work its way into the city’s fabric right away. Then-WBCN DJ Charles Laquidara said the alternative rock station wouldn’t have played a song as popular, or as old, as “Dirty Water’’ by the time its heyday began in 1968. But it occasionally used excerpts from the song in packages or promotions—“It was mostly a goof song for us, whenever we needed something about Boston,’’ he said—an indication that it had already taken on a role representative of the city.

“Everybody loves a song that mentions your city,’’ Laquidara added. “As soon as they hear the word Boston, they adopt it and make it a Boston staple. There aren’t that many songs about Boston.’’

The advent of oldies and classic rock stations in the decade to follow and a cover of the song around the same time by The Inmates may have also played a role in growing the song’s legacy.

But “Dirty Water’’ really started to take on a life of its own in the mid-90s. During that period, a few different things happened. For one, that period featured the eventual declaration that the Charles River had been made clean. The Boston Globe’s archives feature several puns referencing the song in relation to the cleanup effort.

After the cleanup, a group even organized to try and break a record for the most guitar players to play the same song at once, and “Dirty Water’’ was the chosen tune. A group in Nashville had recently tried to break the record with a song deeply connected to that city: Elvis Presley’s “Heartbreak Hotel.’’ Fred Bramante, who organized the record attempt and at the time ran Daddy’s Junky Music stores, said “Dirty Water’’ was the answer to that. Plus, he said, the song was easy to play. More than a thousand gathered and played, but alas, the record was not set that day.

Perhaps most importantly, the late 1990s is also when the song became a victory anthem in Boston sports.

Although the song is most heavily associated with a Red Sox win, the Boston Bruins claim to have started using it first. A spokesperson for the Bruins said the hockey team began playing the song after wins when the team moved into the TD Garden (then the Fleet Center) in 1995, a practice that continues to this day. That would put the Bruins’ use of the song at least two years ahead of the Sox.

Why, then, is it so heavily associated with the Red Sox? “There’s lots of misconceptions like that,’’ said Mick Colageo, a reporter for The Standard-Times of New Bedford who has been covering the Bruins since 1991. He said it speaks to “the Bruins’ lack of a following back then.’’ A Bruins spokesperson did not make anybody available for an interview about the song’s use at the Garden.

Some online sources say “Dirty Water’’ started playing after Red Sox wins at some point in the 1997 season. However, Love That Dirty Water!—a book about the history of the song, the band, and music at Fenway—identifies the debut date as April 10, 1998, the season’s home opener, in which Mo Vaughn hit a walkoff grand slam. You may be able to make it out in the background of the video below, but it’s hard to tell exactly what’s playing over the sounds of the crowd and the commentary.

According to the book, ’’Dirty Water’’ was endorsed as the victory song by then-Red Sox manager Jimy Williams, and stuck on from there.

By the 2002 Red Sox season, the first under the ownership of a group led by John Henry (who also owns Boston.com), the song had already been Fenway tradition for a few seasons. It was maintained by Red Sox senior advisor Dr. Charles Steinberg, who came on with the new ownership to control Fenway’s in-game experience, among other things. When the team won its first World Series after 86 years two seasons later, the song took on even more power, Steinberg said.

“So many things happen when you win a World Championship that resonate deeply with a region,’’ Steinberg said. “You see the duck boats, and you think of the rolling rally. You hear the music, and you think of [the 2004 postseason].’’ 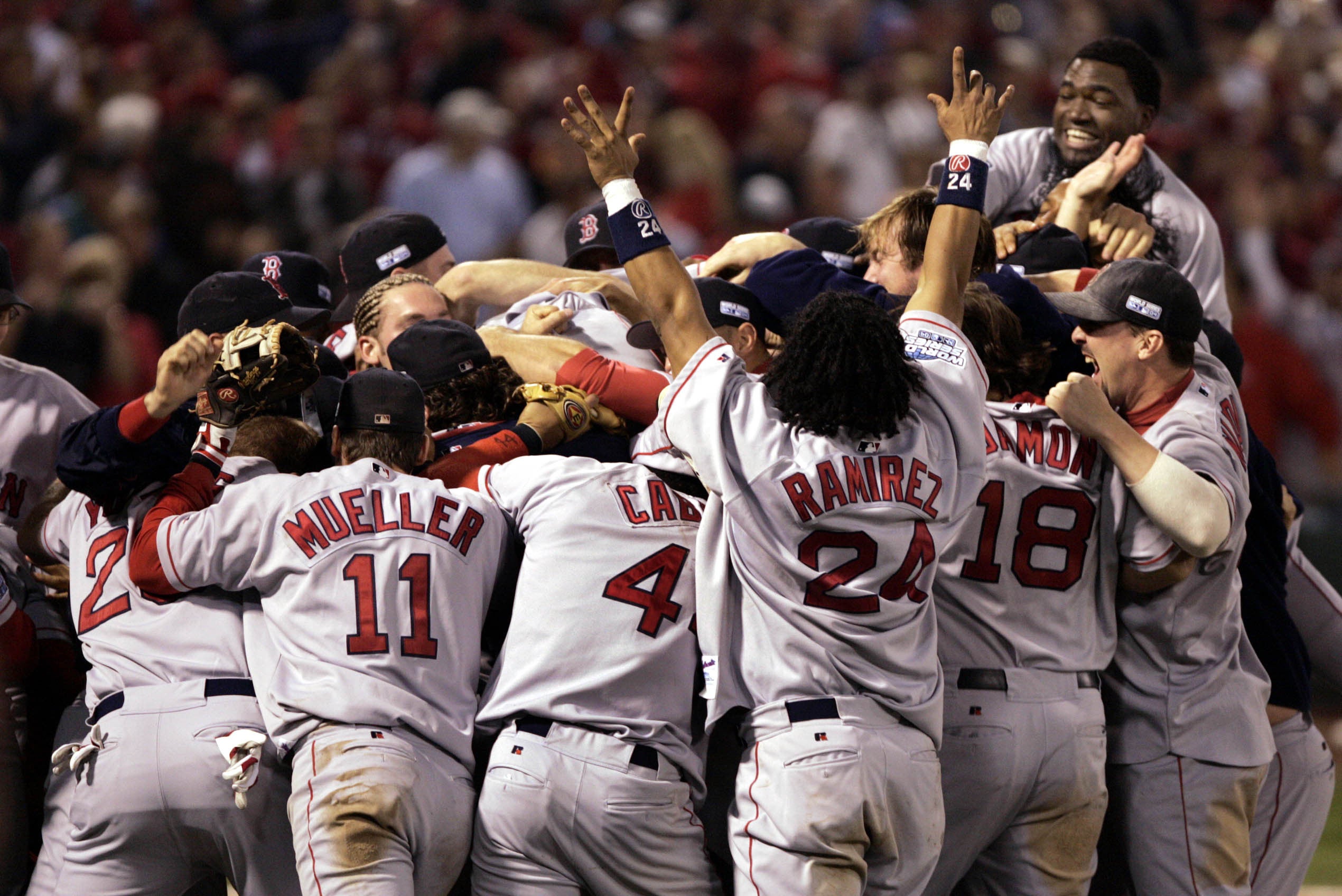 The Red Sox, after winning the World Series in 2004.

Steinberg said the use of “Dirty Water’’ at Fenway is similar to the playing of “Where Everybody Knows Your Name’’ before the game, or “Sweet Caroline’’ in the eighth inning, or even “Take Me Out to the Ballgame’’ during the seventh inning stretch—except for one key difference. It only plays when the Red Sox win.

“Knowing that the first notes herald a Red Sox win, which presumably [fans] enjoy, it gives the song a power in other areas of your life that makes you think of the times you’ve had at Fenway Park,’’ he said.

In recent years, it has played in England at Liverpool Football Club’s home matches, including at least once this year after a home win. Henry’s Fenway Sports Group also owns Liverpool, suggesting the use of the song may lend itself to some form of cross-marketing, but a spokesperson for Liverpool said the use of “Dirty Water’’ is “merely a case of [stadium operators] filtering through the large number of music requests they receive from supporters and considering them all.’’ The name Liverpool derives from the term “a pool of dirty water,’’ or “a muddy pool,’’ so maybe the song has resonance in that city, too…even if it’s very specifically about Boston. (Liverpool, it should be noted, is not hurting for a team anthem.)

Back in Massachusetts, the phrase “Dirty Water,’’ without the accompanying music, has taken on enough cultural cachet to become something of a branding opportunity.

The Standells’ Tamblyn did not expect the song to be the band’s biggest hit upon recording it nearly 50 years ago, he said. “We never in our wildest dreams thought it would become so iconic,’’ he said. 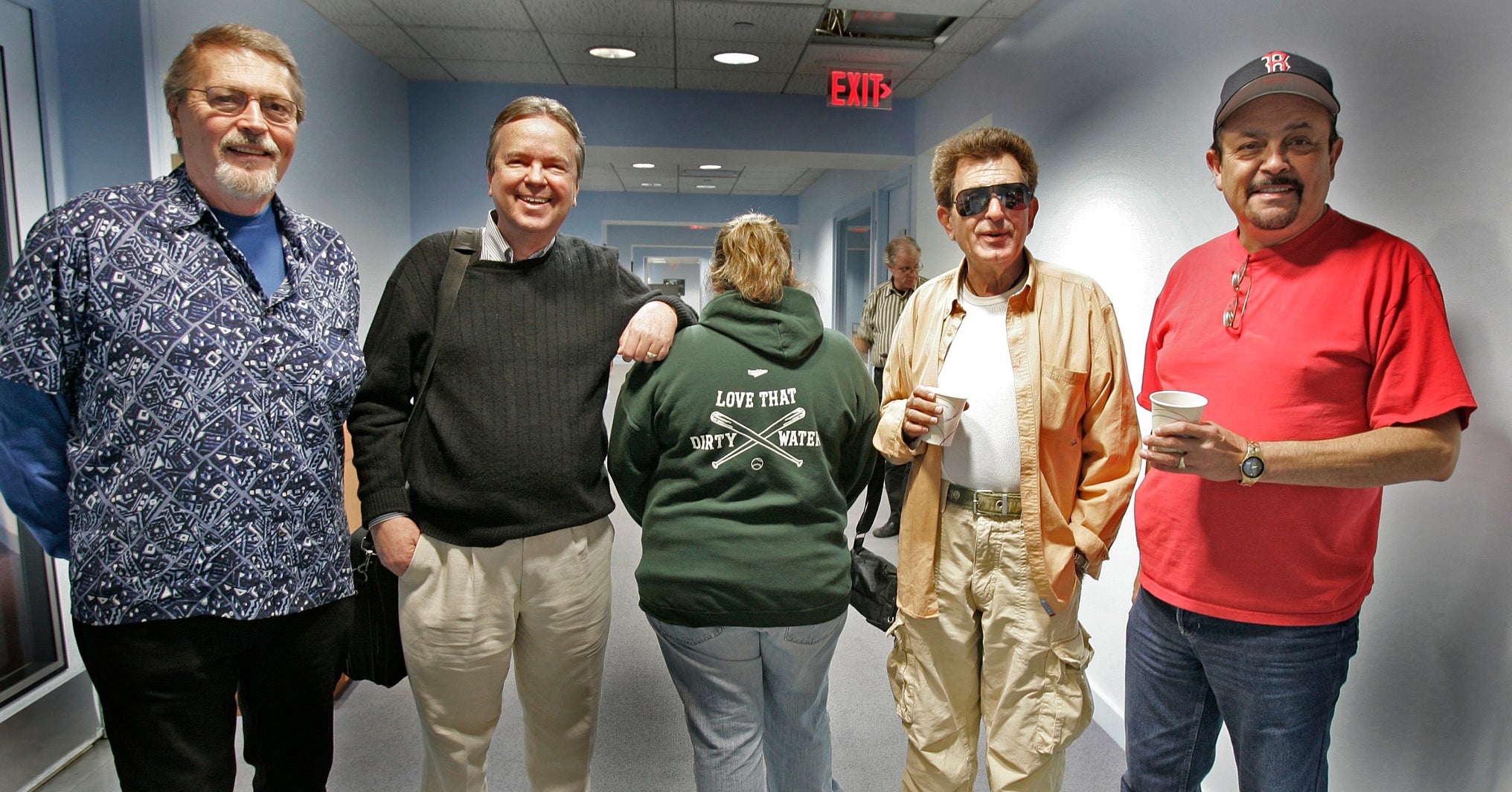 The Standells in 2007, at the WROR studios. From left: Gary Lane, Larry Tamblyn, Tony Valentino, and Dick Dodd, with a station intern, whose sweatshirt says “Love That Dirty Water,’’ in the middle.

Tamblyn said The Standells didn’t realize the song had seen a resurgence in Boston until sometime in the early 2000s, when a member of the band heard it played after the last out of a televised Red Sox win. They’ve since performed the song at Fenway multiple times (including during the 2004 World Series), and have taken note as everybody from Bruce Springsteen to the Dropkick Murphys to Jimmy Fallon has covered it.

The lead singer on “Dirty Water,’’ Dick Dodd, left The Standells in 1968, and the band fizzled out shortly thereafter. (Dodd died in 2013.) The Standells reunited a few times with different lineups, and the band is still active today, with Tamblyn singing “Dirty Water’’ when the band performs it. A 2013 Standells album featured a new tribute song to Boston, called “Boston’s Badass,’’ in response to the marathon bombings.

The band never put out anything else even close to the popularity of “Dirty Water.’’ While they got a little bit of radio play with other songs, The Standells are often referred to as a one-hit wonder. But at least in Boston, that hit had some distance on it and carried well over the Green Monster. To hear its legacy, just listen up the next time the Red Sox (or the Bruins) notch a win at home. 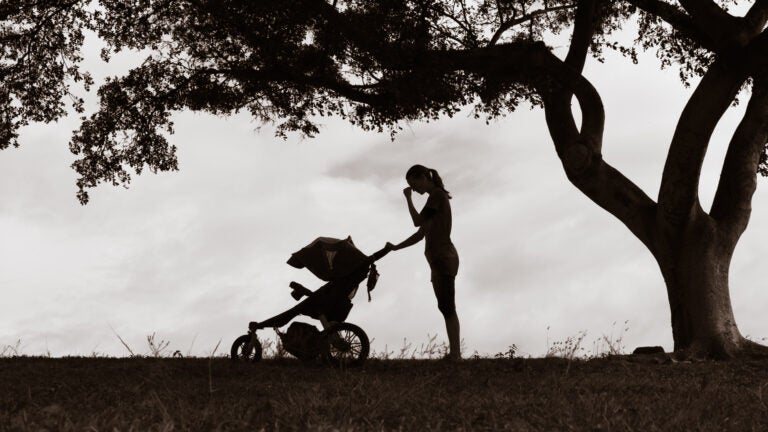