The Wright brothers were the first to successfully fly a motorized aircraft, right?

In 49 states, the answer is yes. But in Connecticut, the title belongs to a man named Gustave Whitehead. This is according to a 2013 state law, which also names the Ballroom Polka as the state’s official polka.

Ohio, where the Wright brothers lived and where they designed and built their history-making aircraft, does not appreciate Connecticut’s attempt to take its place in aviation history.

It responded on Tuesday with a resolution unanimously passed in the state’s House Transportation and Infrastructure Committee.

The short version: Back off, Connecticut.

“This happened a century ago, and for some people to try to change history without substantive evidence, unwavering evidence, it’s just wrong,’’ Ohio state Rep. Rick Perales, who sponsored the resolution, told Boston.com.

“I have nothing against Ohio, I’m even a Cleveland Browns fan, but Ohio is wrong about this,’’ Connecticut state Sen. Kevin Kelly said.

Ohio has some experience arguing with other states over aviation firsts. For years, it has been in a dogfight with North Carolina over which state can truly lay claim to the Wright brothers’ legacy. Orville and Wilbur may be from Ohio, but North Carolina is where the Wright Flyer first took off in 1903.

The battle has played out over license plates and coins. When North Carolina put “First in Flight’’ on its license plates, Ohio responded with license plates that say “Birthplace of Aviation.’’ When North Carolina put an image of the brothers and the words “First Flight’’ on its state quarter in 2001, Ohio put an image of the Flyer and the words “Birthplace of Aviation Pioneers’’ on its state quarter, which was released in 2002. By 2003, the United States Congress actually weighed in and passed a resolution stating that Dayton, Ohio, is the birthplace of aviation. The House vote was 378-3 for the resolution. The three who voted against it were from North Carolina.

But now, Connecticut’s claim has made allies out of longtime rivals.

“This is probably the first time we’ve agreed on anything,’’ said Ohio’s Perales.

According to Connecticut’s version of history, on August 14, 1901, a man named Gustave Whitehead, who lived in Bridgeport, successfully flew his Model 21 aircraft. Whitehead described the flight to the Bridgeport Herald. (It’s on page 5, as apparently the first-ever powered flight was not deemed a big enough story for the front page.) He told The Boston Globe on August 22 that he expected to prove his accomplishment to the world by flying to New York within the next month.

“Those who are now skeptical will have cause to open their eyes in wonderment,’’ Whitehead said.

There is no proof that New York flight ever happened. So what inspired Connecticut to change history?

A big part was the foreword in the 2013 edition of Jane’s All the World’s Aircraft, which proclaimed that Whitehead was the first person to fly. This was heavily based on the research of historian John Brown and some exceedingly blurry photographs taken in 1906 of an exhibition, which Brown believes had photographs of Whitehead in flight that were taken in 1901. (Want to judge for yourself? Brown’s very extensive research is here, and Scientific American’s takedown of the pro-Whitehead argument is here.)

Perales said that initially, he wasn’t going to argue with Connecticut about aviation history because the Wright brothers’ place is secure and “if you argue too much, it gives it credibility. And it wasn’t worth doing that.’’

But then Connecticut passed its law, and “that kind of took it to the next level.’’

“It was important for Ohio to stand behind the Wright brothers,’’ Perales said.

Furthermore, it said, the state’s General Assembly “gives no credence to the false claim that Gustave Whitehead was the first man to achieve flight in a sustained, controlled, powered flight’’ and that any evidence of Whitehead’s pre-1903 flights was “inconclusive.’’

In a snarky aside, North Carolina’s resolution noted that Bridgeport was also the home of P.T. Barnum, “who said, ‘There’s a sucker born every minute.’’’

WHEREAS, From time to time some individuals, publishers, and lawmakers revive the claim that Gustave Whitehead (1874- 1927), a resident of Connecticut, made a sustained, powered flight in a heavier than air machine at Bridgeport on August 14, 1901, two years before the Wright brothers of Dayton, Ohio, flew on December 17, 1903, at Kitty Hawk, North Carolina;

WHEREAS, The law provides no evidence that Gustave Whitehead ever designed, built, and flew a successful powered flying machine; and

WHEREAS, Scholarly research by respected and academically credentialed historians over many decades has found no evidence to substantiate the Whitehead claims; and

WHEREAS, A publicized digital image, purported to be an enhanced copy of a photograph that shows Gustave Whitehead’s 1901 machine in flight, reveals only indistinct shapes

On a more friendly note, it says, “the states of Ohio and North Carolina share and cherish the legacy of the Wright brothers,’’ and concludes by urging people to visit the Dayton Aviation Heritage National Historical Park and the National Aviation Heritage Area in Ohio to learn more about the invention of the airplane.

Connecticut state Rep. Larry Miller was a big proponent of the law recognizing Whitehead. In 2013, after the bill recognizing Whitehead passed but before Gov. Dannel P. Malloy signed it, Miller told the Hartford Courant: “If he doesn’t [sign the bill], there’s something wrong with this guy. He better wake up.’’

Malloy did not respond to multiple requests for comment.

Kelly took up the cause after Miller died last year. He said Ohio’s resolution would have no effect on Connecticut’s law.

“Whitehead flew longer than the Wright brothers, and even passed over a portion of Long Island Sound, according to historical records,’’ Kelly told Boston.com. Those records, however, seem to be a letter to the editor of American Inventor that Whitehead wrote himself. The editor wrote that he was hopeful Whitehead was telling the truth and awaiting photographic proof of Whitehead’s claims. But those photos never arrived.

“I have a passion for correcting the record and giving Gustave Whitehead his just due,’’ Kelly said. Additionally, Connecticut’s law reaffirmed Bridgeport’s place as a “mecca for ingenuity’’ around the turn of the last century.

“I get these folks want to have something to feel good about,’’ Perales said. And he would even be willing to entertain the idea that Whitehead beat the Wrights if he were presented with some real, conclusive evidence that this was the case.

“Unless and until Connecticut comes up with some really hard, solid, evidence, we can’t change history,’’ Perales said. “It’s not fair to our society and our kids growing up to do that.’’

If only Whitehead had taken a better photograph of his 1901 flight — if, indeed, it happened. Alas, the creator of the Polaroid camera, Edwin Land, wasn’t born in Whitehead’s hometown of Bridgeport until 1909. Though Connecticut’s official website lists the Polaroid camera as one of its firsts, Land didn’t invent it until after he moved to Massachusetts, where he founded the Polaroid company in Cambridge in 1937.

Not that we want to fight about it. 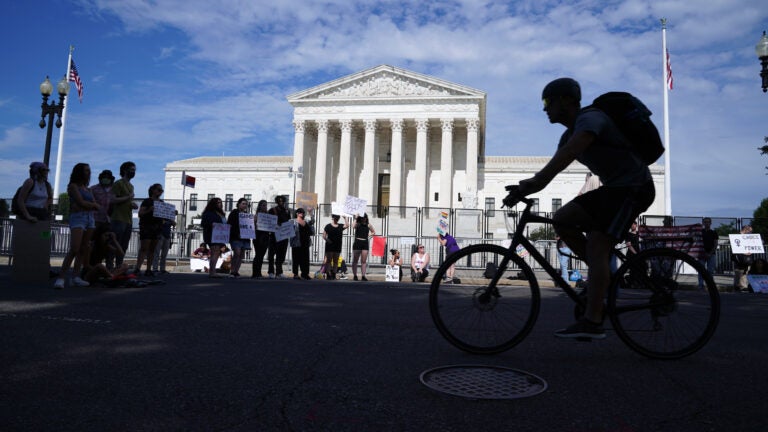