It’s been a pleasant May and a scorching past few days, and yet some of those no-good-dirty-rotten mounds of this winter’s historic snow still haven’t melted. How is that possible?

“The fact that it’s still there is a science experiment waiting to happen,’’ Michael Dennehy, commissioner of the city’s Department of Public Works, told The Boston Globe.

We asked Michael Dietze, an associate professor in Boston University’s Earth & Environment department, to explain the science behind why these snow piles are taking so long to liquify.

The answer boils down to three main reasons: the incredible energy needed to change a solid to liquid, the lack of rain, and the thickness of the piles.

Latent heat refers to the energy needed to change a substance into a different state of matter. Basically, this is energy that a thermometer can’t measure as heat.

Here’s a graph of this phenomenon from Splung.com. The energy added is on the x-axis, and the temperature is on the y-axis. 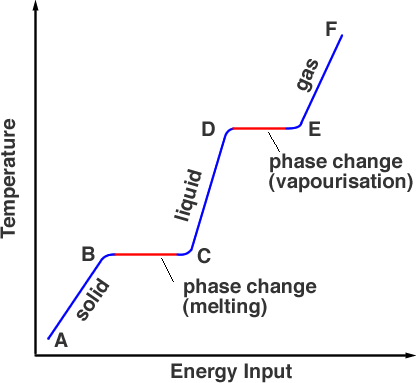 Notice the two plateaus in the graph. At those sections, as more heat is added to the substance, the temperature does not change. These plateaus represent each change of phase, from ice to water and then water to vapor. Warming ice up to 32 degrees doesn’t take too much energy, but getting all of that ice to melt takes a lot more time and energy.

This is the main reason why using a flamethrower wouldn’t be all that helpful for melting ice. It’s not the danger aspect — though that’s there, of course — it’s that flamethrowers wouldn’t actually be that efficient for all the energy they use.

The lack of rain

Air is a fairly good insulator, and snow is chock full of pockets of air. That makes snow piles less sensitive to the outside air temperatures.

But water and rain pierces right into the snow and those pockets of air, and the rain brings plenty of heat with it. The more wet things are, the worse they are at insulating against the outside temperature; “imagine a wet down jacket vs. a dry one,’’ Dietze says. A rainy few days, then, would do a good job at melting these snow piles.

Unfortunately for us, Boston just experienced the driest May on record since 1944, according to the National Weather Service. Just .31 inches of precipitation have fallen this month. That’s not conducive to melting snow.

The thickness of the piles

These surviving snow piles were packed into a small location on purpose, and so they are incredibly tall and dense. That means there are layers and layers of snow that have not seen direct sunlight, and they remain buried under insulating ice and snow (and garbage).

Putting all that snow in one compact spot is great for space conservation. However, it means that these thick mounds take longer to melt than, say, a thin sheet of snow on the ground. The more surface area of snow, the quicker it will melt.

This is the reason why a snowman can remain solid while the snow and powder on the nearby ground melts. That snowman’s compactness means that he (or she) needs more energy to melt.

And that’s true whether the snow has an orange carrot stuck in it, or, like these remaining trash-filled snow piles, orange cones formerly used as space savers.

Severe local weather in New England through the years: