(Updates throughout with comment from a man claiming responsibility for the flag.)

A man claiming responsibility for hanging a Confederate flag from a memorial for black soldiers says he didn’t intend it as a racist gesture – and in fact was protesting the symbol and what he believes it represents.

Some who saw the flag hanging from the memorial – including a woman who took it down – interpreted its placement as a hateful gesture. The flag hung from a sword held by a sculpture of Col. Robert Gould Shaw, commanding officer of the Union Army’s Massachusetts 54th Regiment.

Harvard Medical and MIT student Stephen Allsop told Boston.com that he was part of a group of demonstrators that left the flag on the memorial after a Confederate flag-burning ceremony on Sunday evening.

Allsop said he and five others gathered at the memorial at 7 p.m., where they burned two Confederate flags as a way to show “solidarity with people who live in states like South Carolina’’ where the flag remains a “blatant issue.’’

The gesture came amid a national debate about the Confederate flag following the murder of nine African-Americans in a South Carolina church earlier this month.

“The Confederate flag is inextricably tied to a legacy of terrorism, oppression and hatred,’’ said Allsop, who is African-American. “It cannot be separated from that.’’

While one of the flags was burned “pretty completely,’’ the second was only “partially burned,’’ so Allsop said they hung it from the memorial.

“We thought it would be clear we were trying to show the destruction of that symbol,’’ Allsop said.

The Robert Gould Shaw and Massachusetts 54th Regiment Memorial commemorates one of the first all-black regiments formed during the Civil War. The regiment inspired the Oscar-winning 1989 movie Glory.

Melissa Carino told The Boston Globe that she spotted the flag hanging from the memorial around 8 p.m. on Sunday. Carino returned later that evening “untied it and took it down, placing it in a trash can.’’ 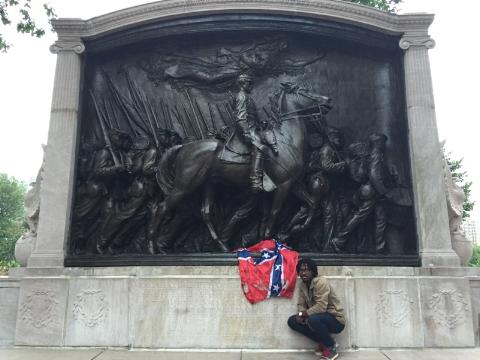 Stephen Allsop in front of the memorial with partially burned Confederate flag. 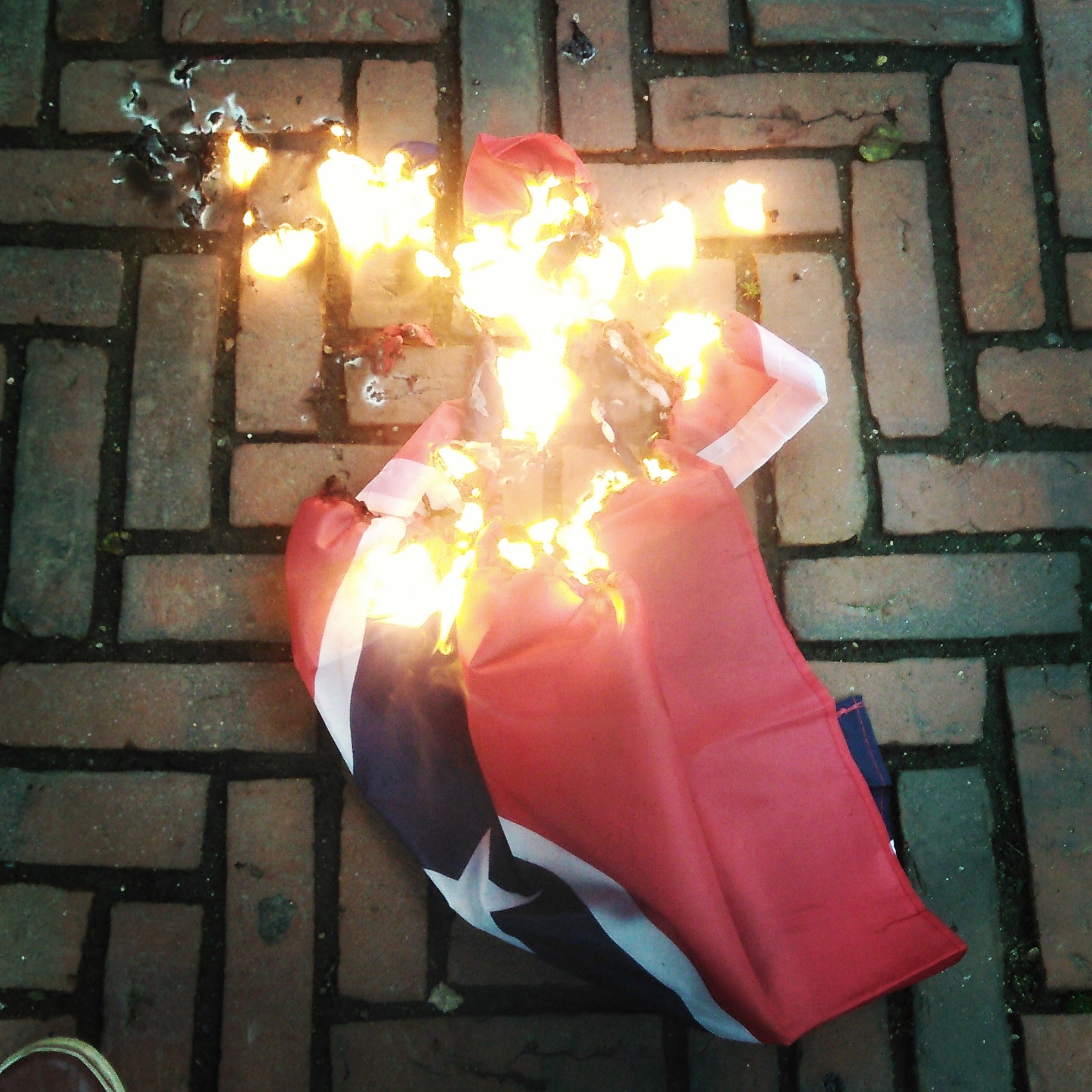 A photo taken by Allsop on Sunday.

The memorial’s long history of vandalism may have contributed to the conclusion that the flag was left as a message of hate.

In January 1954, the sword held in Colonel Shaw’s hand went missing. It wasn’t the first time.

“On an average of about twice a year, somebody – probably small boys – steals the sword out of Colonel Shaw’s hand as he rides down Beacon Street with the legendary 54th Massachusetts infantry,’’ reported The Globe, in a 1954 article headlined ‘Do We Need 24-Hour Guards Over Shrines?’

In August 2012, a Quincy woman threw yellow paint on the memorial, “also splattering a family visiting from Wisconsin,’’ according to The Globe.

In April 2015, a Charlestown man was arrested after he broke off the sword and fled the scene.