Donald Trump has been very public in his support for Tom Brady. It’s unclear if the feeling is mutual, but it appears the New England Patriots quarterback does possess some Trump campaign gear.

Barstool Sports writer John Feitelberg tweeted a photo of Brady’s locker Saturday, and in it appears to be the trademark “Make America Great Again’’ hat sported by the GOP frontrunner on the campaign trail. 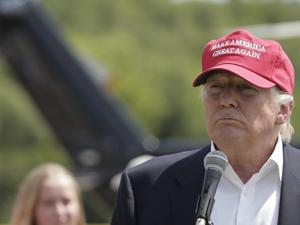 “It’s well documented that Mr. Trump and Tom have a great friendship and have for many years,’’ Trump spokewoman Hope Hill told CNN on Saturday.

Trump hasn’t been shy about his support of Brady throughout Deflategate, calling the quarterback a “friend’’ and a “winner.’’ After a judge took the air out of Brady’s four-game suspension Wednesday for the scandal revolving around allegedly deflated footballs, Trump took time during a press conference to congratulate the 38-year-old quarterback.

“He’s a great guy, for those of you who don’t know him,’’ he said via CNN. “He’s an honorable guy and an honest guy and a truly great athlete. He is really a very good friend of mine and I just spoke to him a little while ago, he’s so thrilled and so happy.’’

Trump also tweeted his support after the decision…

…as he had throughout the scandal, even dating back to the Super Bowl.

In the days following the release of the Wells Report and Brady’s suspension, he tweeted:

And after Goodell intially upheld the suspension on Brady’s appeal, and more than a month into Trump’s presidential campaign:

The Washington Post has a full rundown of Trump’s public support since 2012, when he congratulated Brady on the birth of his daughter. On the day of the AFC Championship game last season, Trump campaign advisor Dan Scavino tweeted a photo of the two “friends’’ playing golf together.

Neither representatives for Brady nor Trump immediately responded for requests for comment on this story.