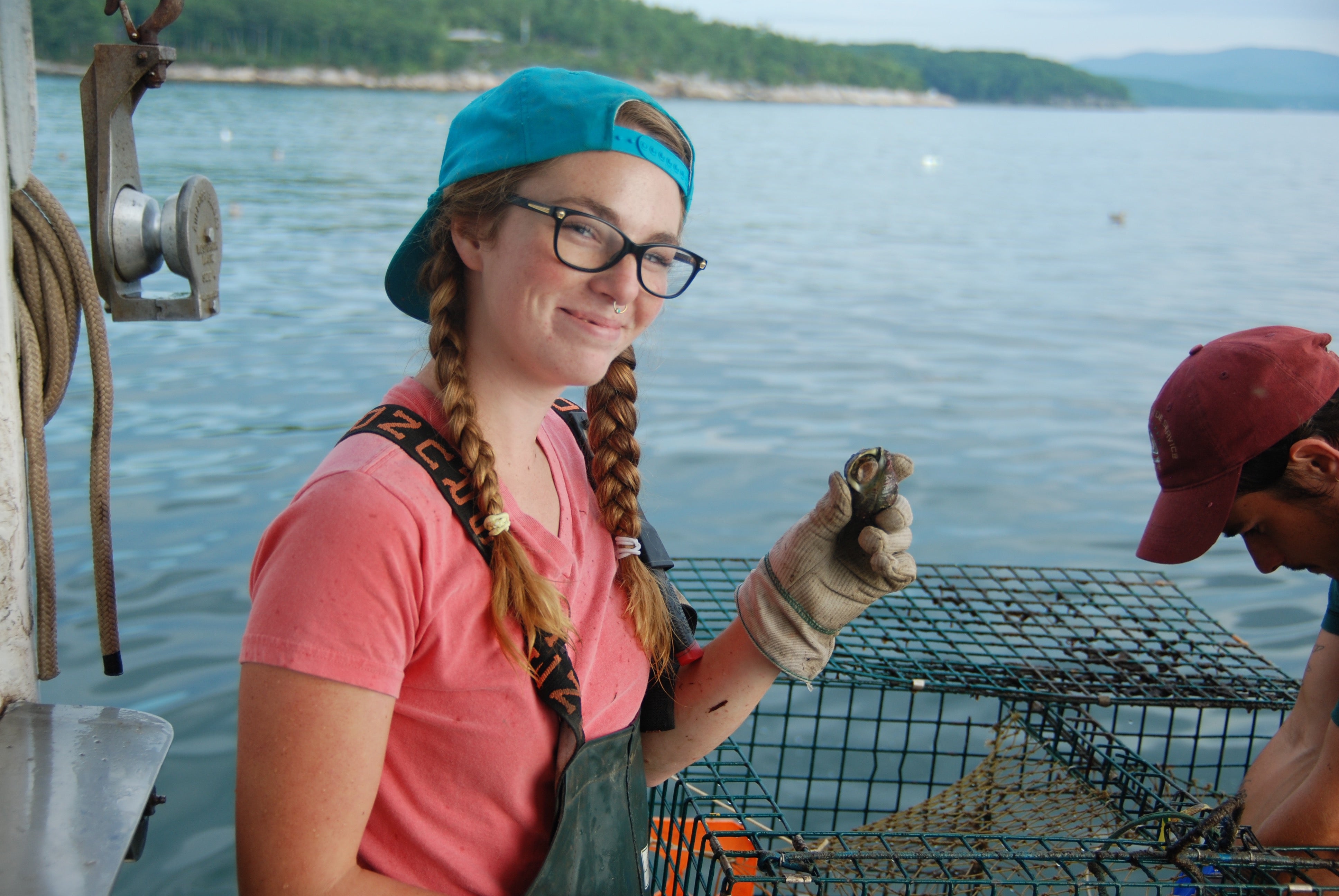 Sadie Samuels holds up a whelk that got dragged up in her lobster trap.

“One thing I like about being a girl out here is that they can’t pay me less than a guy,’’ Sadie Samuels shouted over the grinding sound of her lobster boat’s mechanical pulley as it hoisted a trap up from the bottom of the ocean. Samuels switched the pulley off and yanked the trap onto the side of her boat before lifting the lobsters out of their wire cage. Some hung on to the mesh with their pincers.

“They just can’t,’’ the 23-year-old continued at a normal volume. “There’s a price per pound, and fuel costs the same whether you’re a guy or a girl. Any other job, they’d pay what—73 cents to a man’s dollar, statistics say?’’

Samuels, whose long, blonde braids poked out from under her turquoise baseball hat and framed her freckled face, turned back to the steering wheel of her boat, which is christened Must Be Nice. Her sternman Zach Buckley finished transferring the lobsters from the trap to a table, where they awaited the rubber bands he’d soon strap around their strong claws. Some raised their tails and clacked their crushers, poised in fighting position like karate masters.

Buckley replaced the bait—a mesh bag filled with tightly packed mackerel that smells as fishy as it sounds—and pushed the trap back into the water. Samuels put the boat in gear and headed for the next yellow and green buoy that marks her traps.

“When I was younger, I felt questioned by others, like whether I could do this,’’ Samuels said.

“It makes you start to question yourself. I was like, ‘Can I do this? Am I strong enough to lift these traps?’’’

She made a wide circle and sidled her boat up next to the buoy.

Only about four percent of the 5,000 lobster licences granted by the state of Maine are currently owned by women. Of the 205 women who make up that four percent, 73 of them are under the age of 35.

“It’s frustrating, but I don’t care,’’ Samuels said. “The more I do it, the more people get it. The guys at the harbor are really nice. It’s mostly older men, yacht people and people at the farmer’s market where I sell on Fridays who are surprised that I’m a woman running my own boat.’’

Samuels’ father, Matt, has fished out of Rockport for nearly 40 years. Samuels was born at a hospital down the road, and before she ever went home, Matt brought her down to the wharf. By the time she was seven years old, she had her student lobster fishing license. By 13, she’d fished the 200 hours necessary to get her commercial licence. A year later, at 14, she got her first boat.

“I called it the Miss Understood,’’ she said. “I thought I was really clever.’’

Samuels is still living with her father in Searsmont, a town about 17 miles inland from Rockport Harbor, while she saves money to buy land and build her own place.

“I always knew I wanted to fish,’’ she said. “Though I went through a phase at 15 or 16 where I was like, ‘This is so much work, I don’t understand why I do this.’ It was one of those things where everyone would come back to school after the summer and talk about going to water parks and stuff and I’d be like, ‘I baited bags.’’’

Lobstering is hard, physical work, and requires at least two people. The sternman baits the traps and measures the lobsters as the captain drives the boat and pulls up the buoys. Sadie’s sister, Molly, is her sternman—woman, rather—during the summer when she’s not at college.

Samuels majored in studio art at Humboldt State University in Northern California, where she drew, painted, and made prints of Maine and scenes of lobstering. She said there’s a direct correlation between printmaking, which she studied in college, and fishing.

“It’s meditative,’’ she said. “I like repetitive things. Printmaking is highly technical, but you come up with a plan and then you go and print them off. It’s the same with fishing. You have to think a ton and figure out your strategy, but then you just go and haul the traps. I prefer the longer days. Once you get on a roll it sucks to stop.’’ 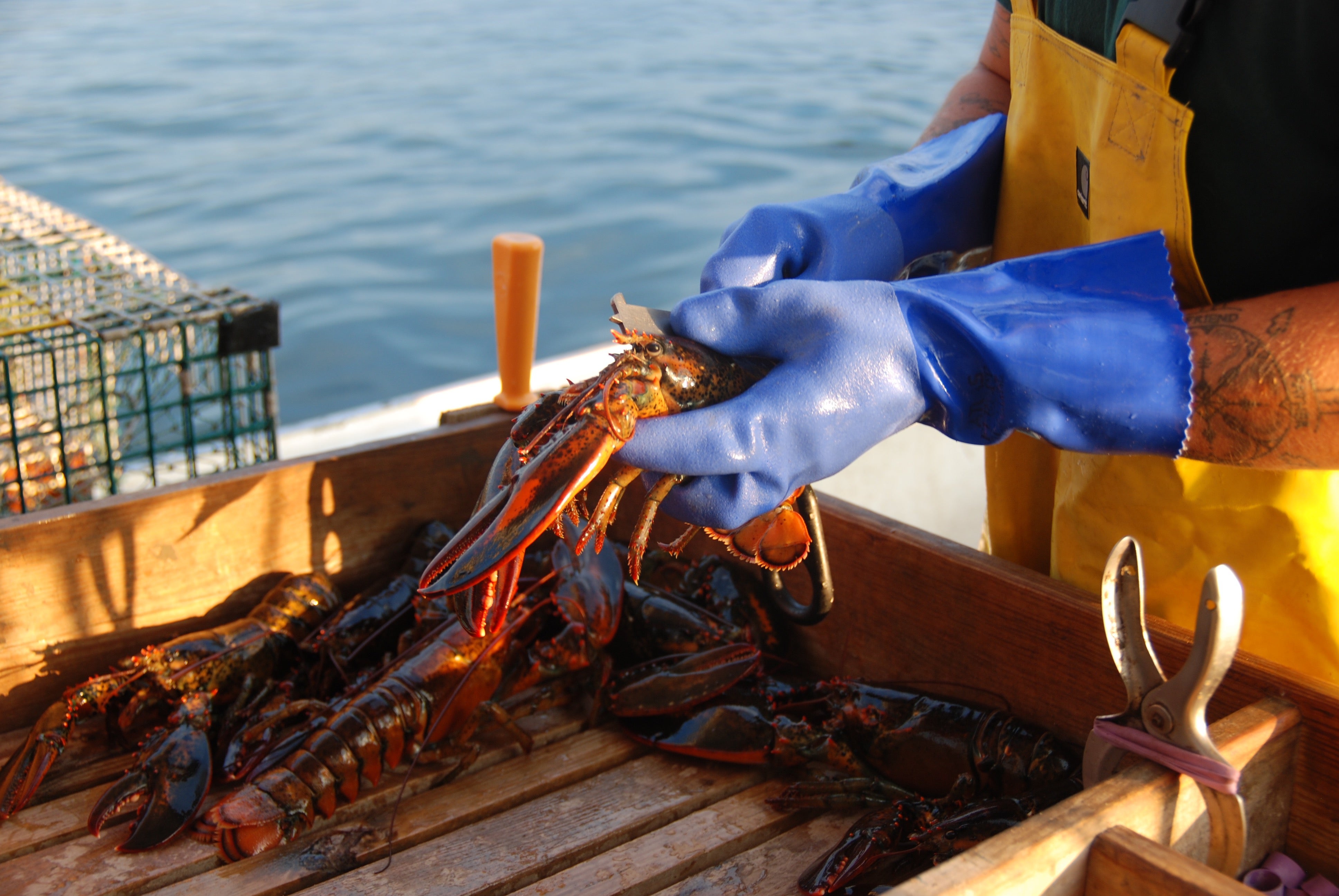 Each lobster gets measured to be sure none smaller than 3 1/4 inches get caught.

At 9:30 a.m., after nearly three hours on the water and with about 60 more traps to go, Buckley strapped rubber bands around a lobster’s snapping claws. Samuels put the boat in gear again and pushed a trap back into the water, where it will sit for four days.

While she fishes two days on and one day off, the work never stops. If she’s not out on the boat, she’s getting more gear ready, since she wants to quadruple the number of traps she currently has by next year. That would put her at 800, the legal limit.

“It’s all about work ethic in Maine. You want heat? You split your own wood,’’ she said. “You want to get to your car in the winter? You shovel it out. No one else is going to do that for you.’’

Expanding her own small business is a tricky one, however. Lobstering is highly political. If one fisherman feels like another is encroaching on his territory, he might cut the buoy off the line that connects it to the trap on the ocean’s bottom, causing the line to sink and the trap to be irretrievable.

And as a lobsterman, you never tell a competitor how many pounds you’ve caught or how much money you’re making.

“All the numbers are secret,’’ Samuels said. “If you get a big catch, you go in when no one else is there at the dock. You don’t want them thinking you were hauling their traps, which sometimes they think if they didn’t have as good a day as you did. There’s a lot of jealousy in fishing. There’s brutal battles. I’m trying to stay away from all that as long as I can.’’

But the fishermen can also be political in a good way.

“They’ll be in the town meetings getting really passionate,’’ Samuels said. “There are guys with bachelor’s degrees who care so much about the sustainability of the fish and the small businesses.’’

Maine’s lobstering industry is highly sustainable. In addition to length limits, you’re not allowed to keep a female lobster who visibly has eggs that haven’t hatched yet. If you catch one, you have to make a small nick on her tail to prevent others from keeping her in the future, even if she’s not carrying eggs the next time she’s caught.

Samuels picked up a lobster and pointed to small black dots inside the tail’s shell.

She notched the tail and tossed it overboard, sending it flying into the ocean, where it sank back into the dark, salty depths. 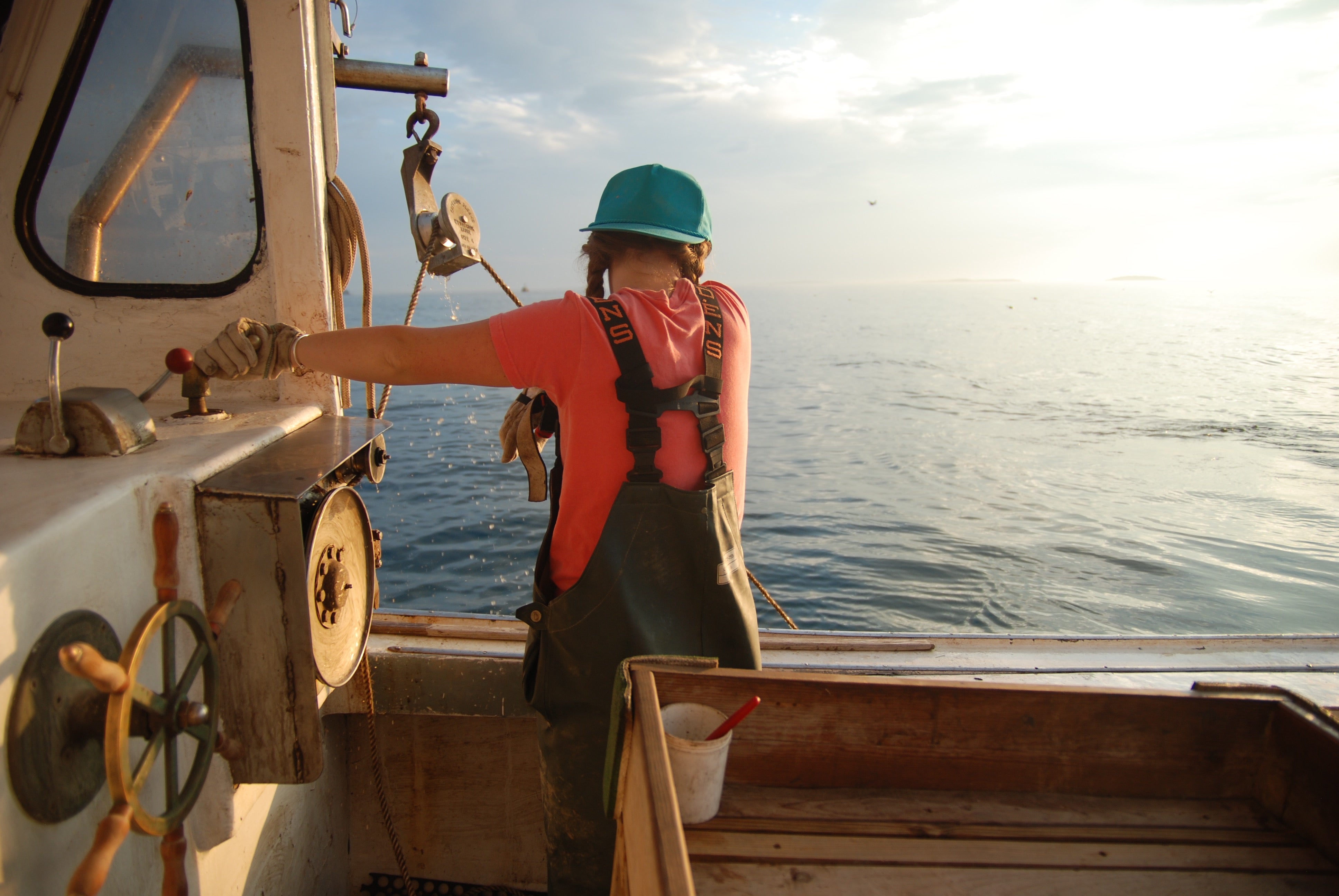 Sadie Samuels works the pulley on her boat Must Be Nice.

At 11 a.m., Samuels threw the last trap of the day back into the water. As she turned the boat around, Buckley scrubbed the decks and cleaned up the fish guts that had spilled out from the bait box over the course of the morning. The boat chugged past the Indian Island lighthouse. Before heading back into the harbor, Samuels twirled the boat in circles to drain the dirty water out.

“When you head in for the day and get your check, you’re like, ‘Man, I earned this. I stink. everything hurts,’’’ Samuels said. She rubbed the red welts on her wrist above her glove where a particularly obstinate lobster had latched onto her skin a few hours earlier.

Back at the docks, the guys who work at the wharf weighed Samuels’ catch and told her the poundage.

“Not enough,’’ Samuels said. She shook her head as she drove her boat back to its mooring. She turned off the engine and secured the boat’s cabin door before paddling her dinghy back to the docks. She was missing one oar lock, so she used her oar like a canoe paddle and knelt on the bottom of the boat like a warrior.

“I love being done with work before most people have even started,’’ Samuels said.

She climbed out and tied the row boat to the dock, which was littered with crab shells and old fishing lines. Then she looked out at the harbor.

“I have loans out for college and for this—I just have to have faith,’’ she said. “I’m constantly getting more gear, setting goals for myself, and reaching them. Then I’m like, ‘What’s next?’

She turned away from the water and started walking back to her car.

“I really feel so spoiled,’’ she said. “I’d do anything to be out here every morning. And I am.’’ 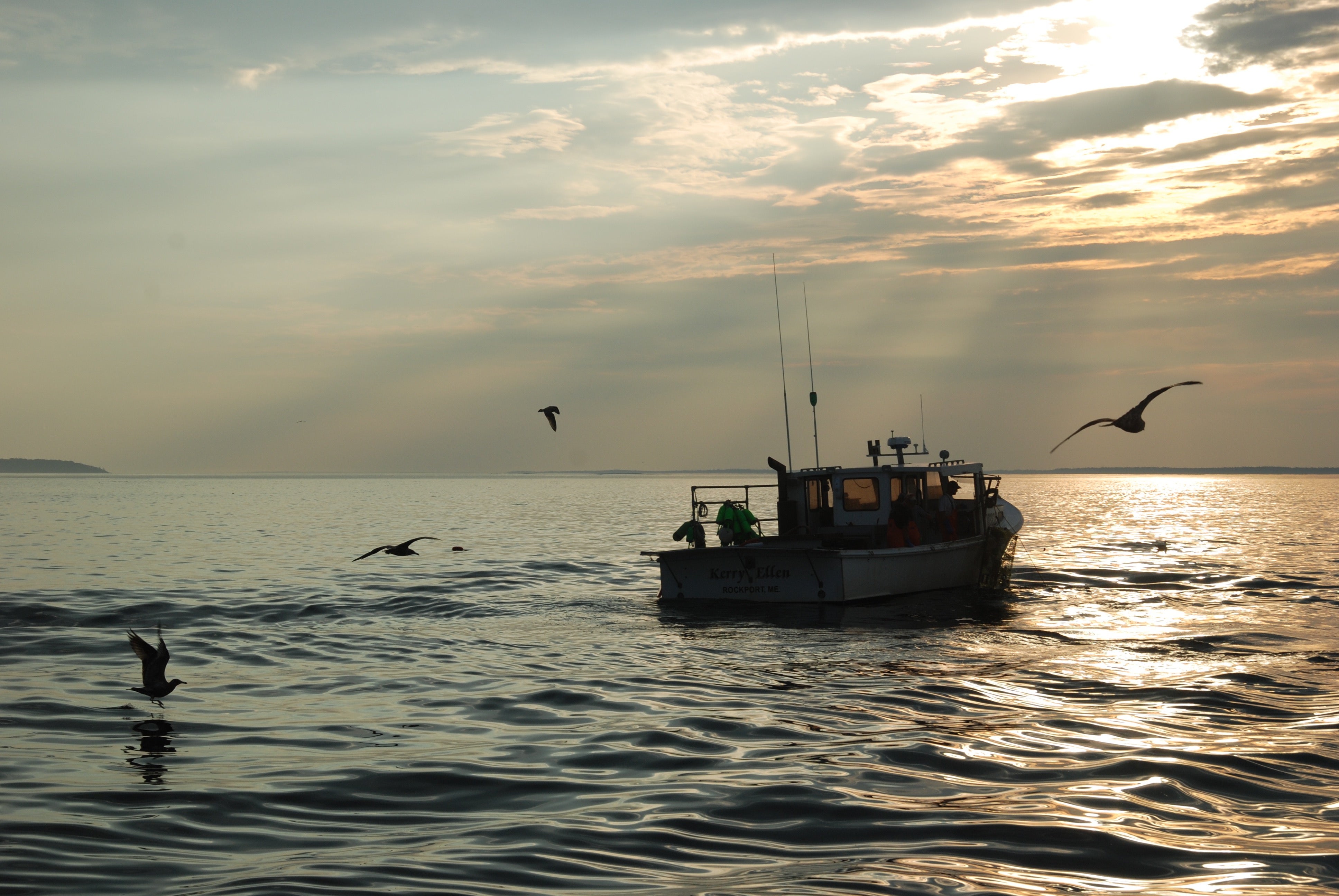 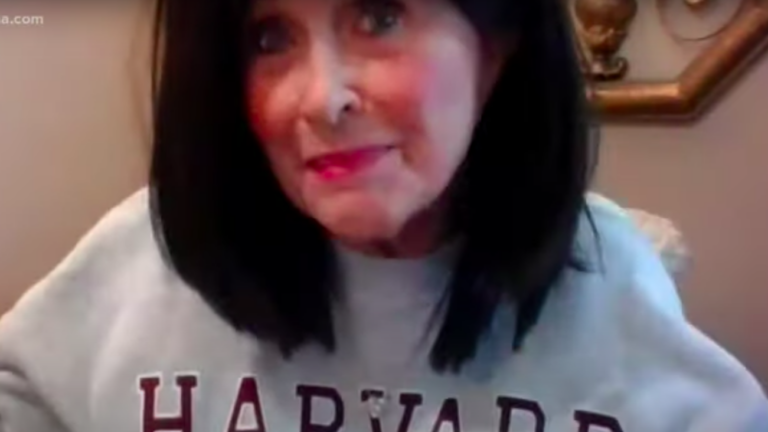 '83 years old and back in college at Harvard'