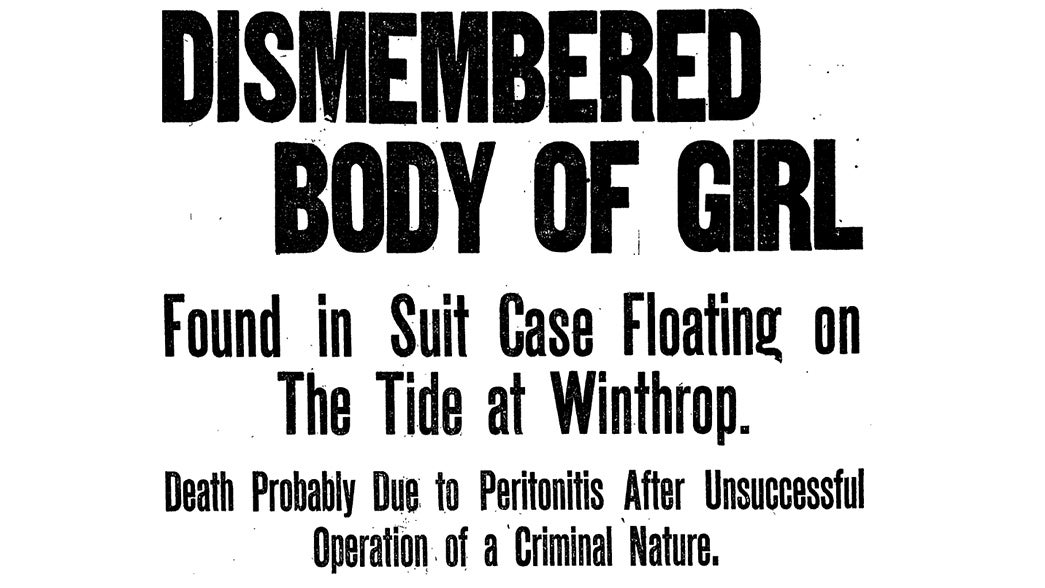 On September 21, 1905, a suitcase surfaced in Winthrop Harbor, with the torso of an unidentified young woman stuffed inside.

The torso was that of a “young and beautifully formed woman,’’ her intestines and stomach removed, her head “doubtless … removed from the body to prevent identification,’’ The BostonGlobe wrote.

Buried in the story is a single reference to “evidence … that a criminal operation had been performed.’’

For years, young women had been dying as the result of botched abortions performed in illegal “medical parlors’’ in downtown Boston. But never had the crimes been as shrouded in mystery.

The “suit case mystery’’ was, according to the Globe, “a crime so awful that the soul revolts in horror.’’

Days after the suitcase was found, police found their “first promising clew’’ — a description of a man someone thought they saw in the area, as well as word of a missing East Boston woman they thought might be the victim, until she promptly “reappeared’’ the next day. A missing Back Bay girl was also misidentified as the possible victim.

On October 27, the limbs of the “suit case victim’’ were found, floating in the Charles River.

The Globe reported on the find, and on a new suspicion about the perpetrator, theorized by the “white wife of a New York Mongolian’’ who told the paper that the victim was “no doubt the wife of some Chinaman who had come into possession of some of the secrets of their murderous societies.’’

On October 30, the victim was identified. She was 20-year-old Susanna Geary, a performer in a chorus and dance company who went by the stage name Ethel Durrell. Her fiancé, Morris Nathan, was quickly arrested in Pittsburgh. 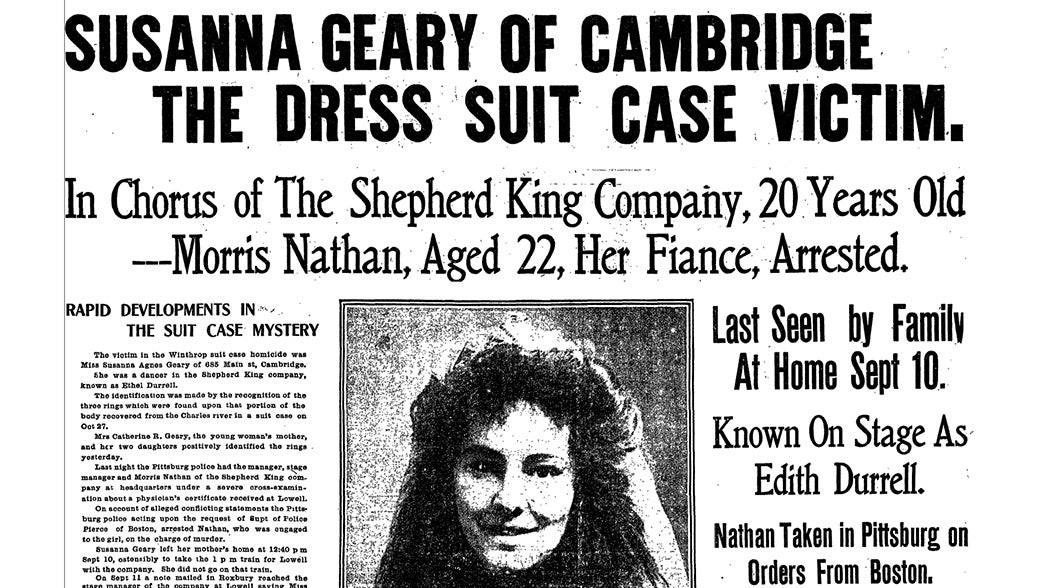 Just days after Nathan was brought to Boston and “charged with the crime of abortion on the dead girl,’’ another arrest was made.

Dr. Percy McLeod, a Back Bay surgeon and a graduate of Harvard Medical School, was alleged to have dismembered Geary’s body, according to the Globe.

Others were soon implicated and arrested. 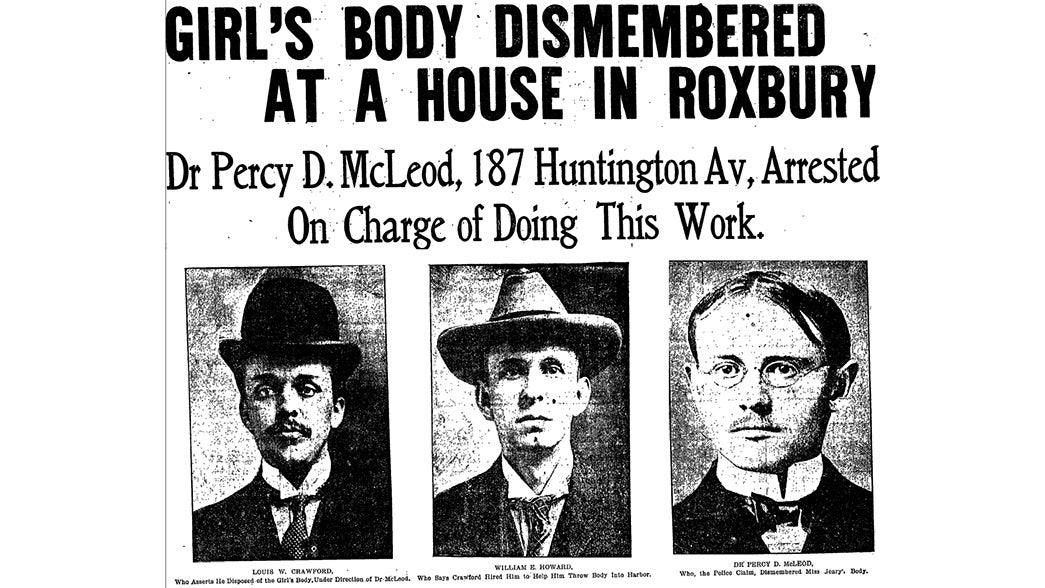 And then, on November 5, Geary’s head was found in a bag in Boston Harbor. It wasn’t police who found the head, but instead a diver hired by the Boston Post. 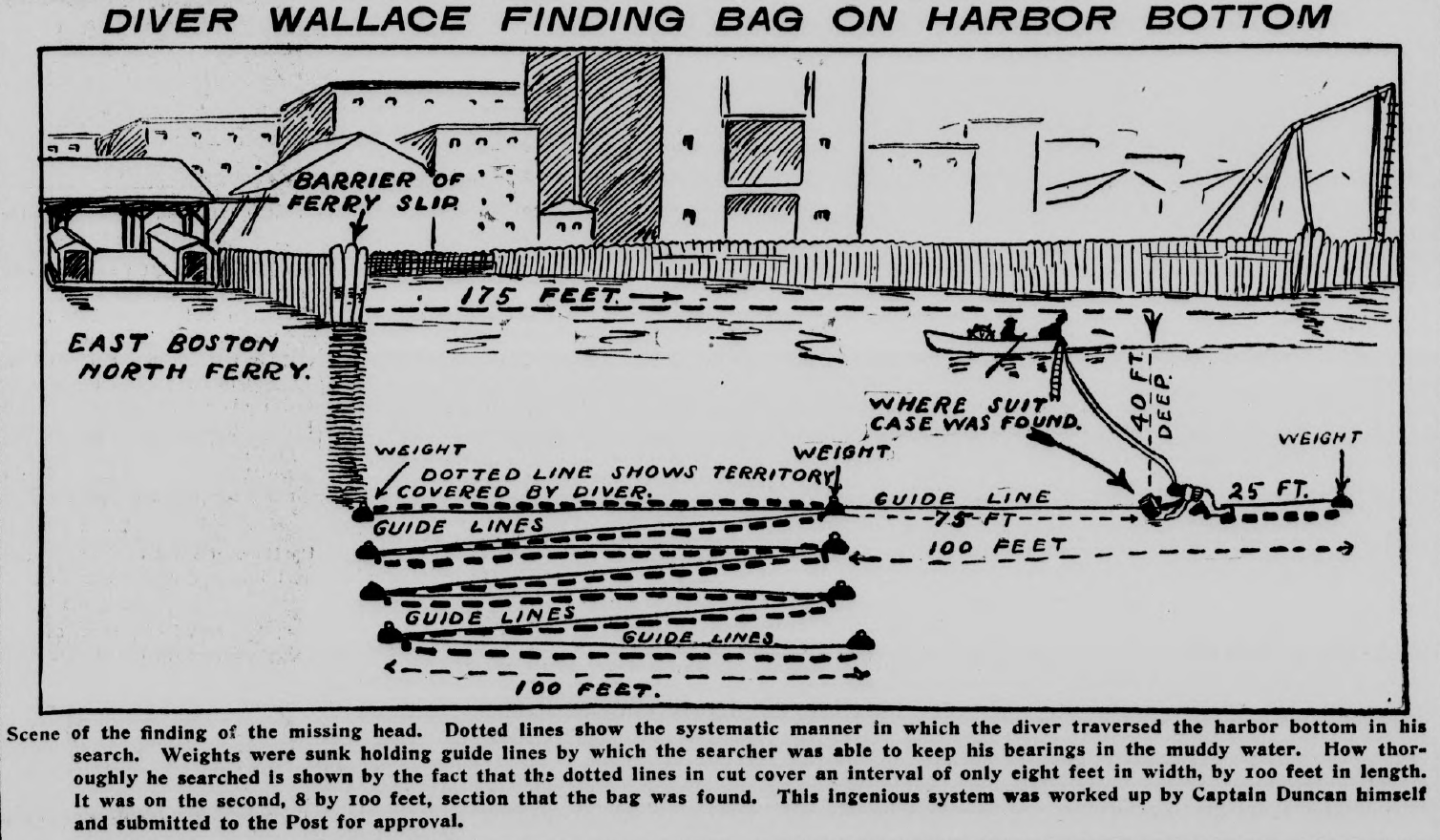 A description of the method used by the diver hired by The Boston Post, published in the paper on November 6, 1905.

Then the raids began.

On November 11, police began a series of raids in the city, shattering storefronts and banging down doors at more than 15 locations where they suspected illegal abortions were taking place.

What had been happening inside these establishments, many of which were located on Tremont and Boylston streets, had “been known to the police and the prosecuting authorities for a long time,’’ according to the Globe.

“Not since the finding of the torso of the unfortunate Susanna Geary has public interest been aroused to such a high pitch as it was yesterday afternoon when the police, armed with five search warrants, raided the offices of alleged malpractitioners on Tremont Street,’’ read a Globe report from November 12.

The Globe went on to report on the huge crowd of “thousands’’ that “gathered in the street’’ and craned their necks to watch the spectacle. 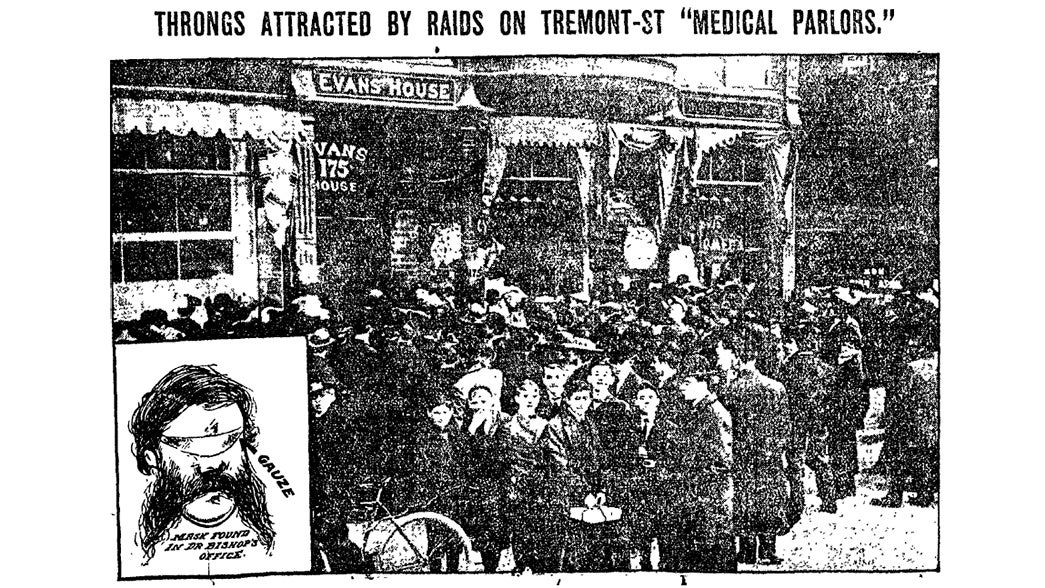 Inside the office of Dr. Jane Bishop, police found a mask that was allegedly worn by whomever performed the abortion on Geary.

“The mask consists of a complete head covering of black hair, with long, flowing black whiskers of the burnside variety, and a gauze covering for the remaining portion of the face,’’ read the report. “That even the operator could not be identified by the color of his eyes was made certain.’’

The aim of the raids was less to round up the perpetrators – since proving their guilt was often impossible – and more to “harass the operators into putting an end to the illegal traffic themselves,’’ according to the Globe.

In the days and weeks following the raids, three individuals involved in Geary’s death went on trial. What emerged from the Globe’s reporting during the trial shed light on how Geary spent her final days.

Geary performed on stage for the final time on September 9.

The following day, she visited a medical parlor on Tremont Street in Boston, where Mary S. Dean performed an abortion.

Dr. McLeod was called in to assist, and performed a second operation in an effort to save Geary’s life. But Geary only became sicker.

On September 18, Geary wrote a letter to her mother, in which she claimed to be in Salem, Massachusetts, sick with diarrhea. She was, in fact, now at another home in Roxbury, hours from death. 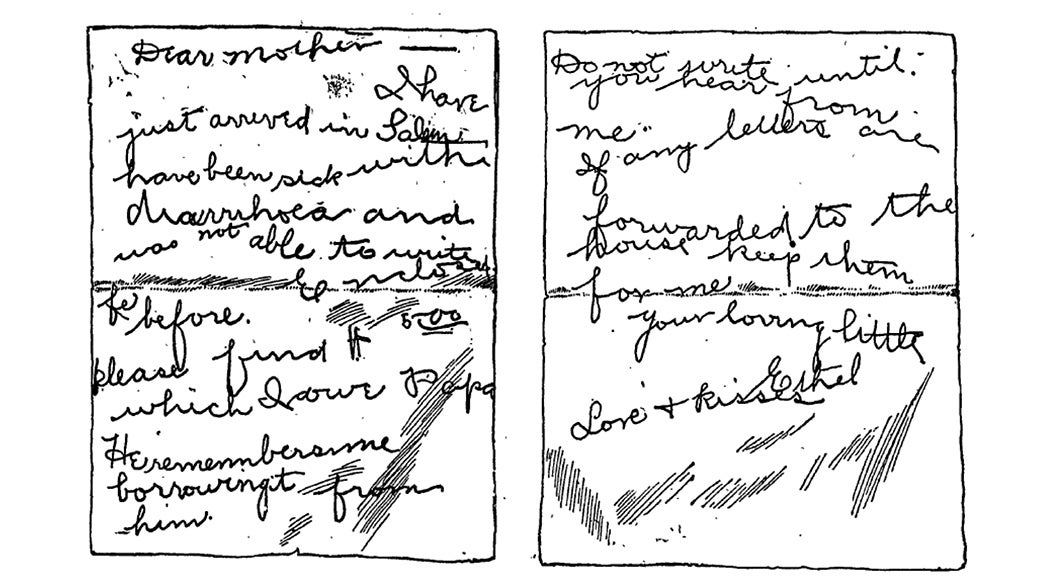 Geary’s final letter to her mother, as published in The Boston Globe on October 30, 1905.

Geary was told that she was dying, and she is said to have asked Dean to pray with her. She died in the early morning hours of September 19.

Discussions ensued about how to proceed, and Dean and Dr. McLeod decided to dismember Geary and pack her body into suitcases. They offered $100 apiece to two men, who purchased suitcases, and were instructed to dump them in the Atlantic Ocean near Portland, Maine.

Instead, the men opted to drop the cases from the East Boston ferry. 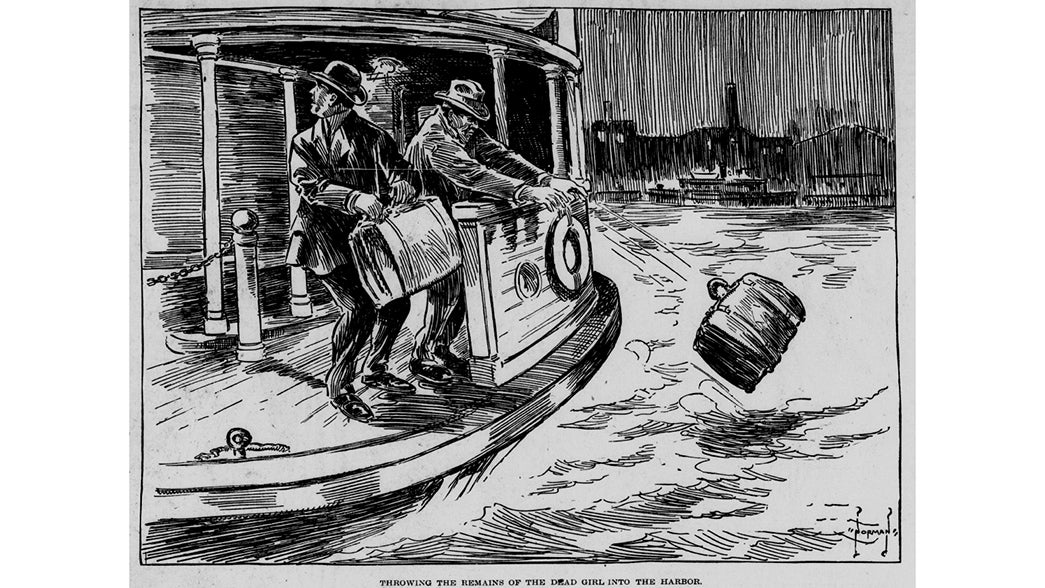 A drawing published in The Boston Post on November 17, 1912. 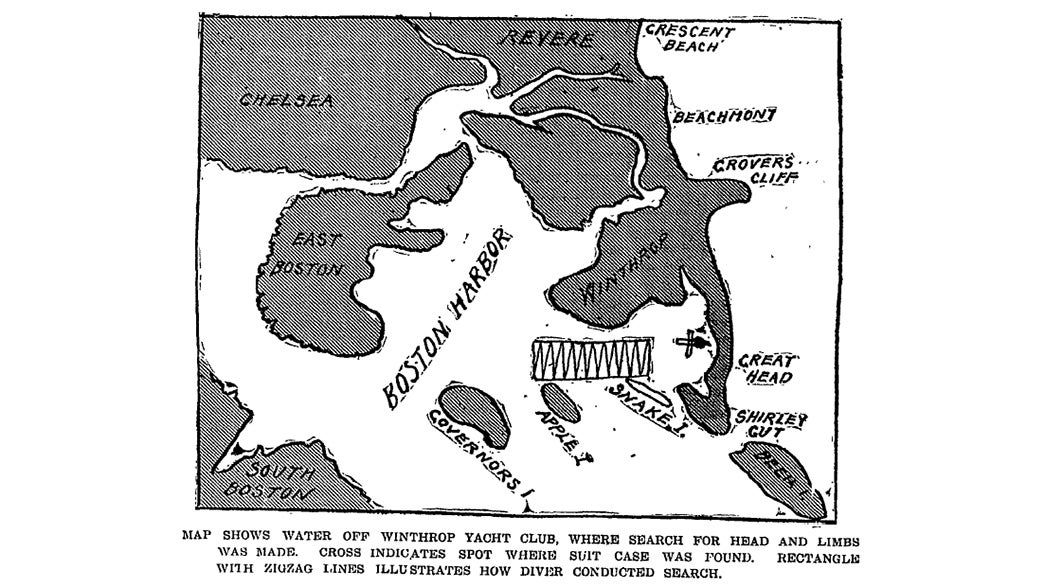 Dr. McLeod was found not guilty. Louis Crawford and William Hunt, the two men who disposed of the suitcases containing Geary’s dismembered body, pleaded guilty and were sentenced to prison.

For months, police continued to search for Dean. The search took them to Portland, Maine, New York City, and Nova Scotia, but Dean was never found.

Susanna Geary is buried in New Cavalry Cemetary, just three miles from where she died. 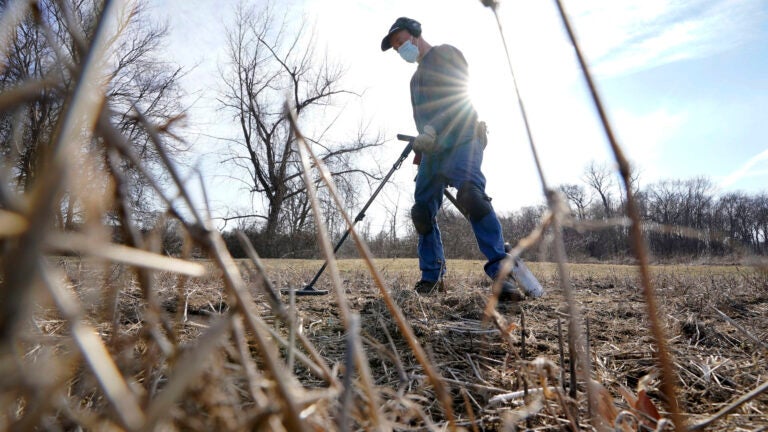