Boston’s Christmas tree arrives Friday on the Common after a three-day, 660-mile haul from Nova Scotia. The tree arrives, as it has every year for the last 45, free of charge.

This year’s 49-foot white spruce (donated by a former Boston Marathoner) is the latest gift of thanks from Nova Scotia to Boston for the city’s help during the deadliest non-natural disaster in Canadian history: the Halifax Explosion.

“The people of Halifax have never forgotten how Boston responded during our moment of need,’’ Zach Churchill, Nova Scotia’s minister of Natural Resources, told Boston.com. 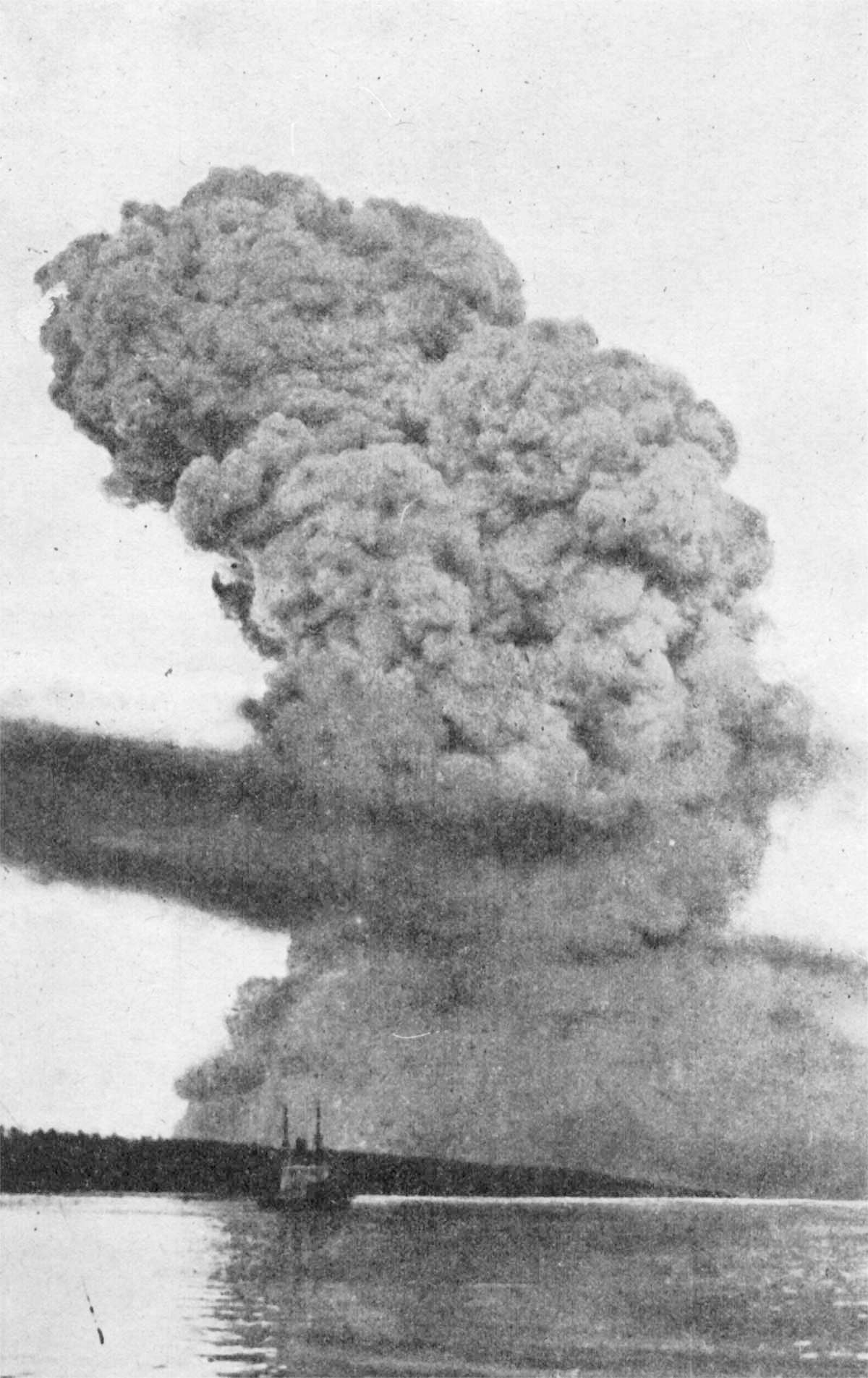 The column of smoke raised by the explosion.

The morning of December 6, 1917 was cold with a “slight southerly wind,’’ recalled a Boston Globe article in 1967, as most December mornings are in Halifax. With a population of 50,000, the booming port city was the largest in Atlantic Canada. According to the Canadian Broadcasting Corp, it attracted constant mid-WWI, trans-Atlantic traffic because of its naturally deep harbors that were relatively easy to protect.

As a port, Halifax was perhaps too successful; harbor traffic control couldn’t keep up.

The SS Mont-Blanc — a 320-foot French freighter loaded with nearly 6 million pounds of explosives, including 500,000 pounds of TNT — was waiting to enter Halifax’s harbor that cold, Thursday morning. The CBC called the ship’s manifest “a recipe for a giant bomb,’’ but it flew no flags warning of its cargo, so it wouldn’t be made a target for German attack.

Inside the harbor was the Norwegian relief ship SS Imo, waiting for the anti-submarine nets to be lifted so it could depart. The steamship planned to collect aid supplies in New York to bring back to Belgium, but was running behind schedule.

After the nets were lifted, Imo departed, increasing its speed beyond the legal limit in the harbor as it exited the crowded “Narrows’’ channel that opened up to the ocean. After it agreed to pass one oncoming ship on the left, the “wrong’’ side, Imo was forced to stay in the opposite lane to avoid a tugboat that was pulling away from shore. The route, unbeknownst to Imo, quickly became a crash course, per the CBC:

Then, through the morning haze, Imo faced Mont-Blanc moving up the Narrows.

Mont-Blanc blew its whistle once, to say it had right of way and would maintain its course: Imo should move to the right. But Imo blew its whistle twice in reply — translation: I am staying where I am.

There was a flurry of whistles between the two ships. Then, almost at the last minute, Mont-Blanc turned hard to the left…and Imo reversed its engines — hard astern.

If only one of these moves had been made, the two ships would have avoided a collision – barely.

But the combination of last-ditch efforts made a collision inevitable.

The two ships struck, Imo grinding into the starboard bow of Mont-Blanc. The sparks immediately set an acid and fuel fire on the French freighter. The crew, who spoke no English, abandoned the ship, as it drifted toward shore. Despite the crew’s frantic gestures, crowds drew on both sides of the harbor to watch the vessel, spewing a column a grease-colored smoked into the air. At least two ships, unaware of the ship’s cargo, sent crews to investigate the burning ship, as it collided into the harbor’s Pier 6.

“It was the largest manmade explosion at the time,’’ Churchill said.

Everything within more than a mile and a half radius — homes, shops, a 10-story sugar refinery — was completely obliterated.

“The [Mont-Blanc’s] steel hull burst sky-high, falling in a blizzard of red-hot, twisted projectiles on Dartmouth [an urban community] and Halifax,’’ according to the CBC, killing 1,500 people immediately. Hundreds more would die in the subsequent days due to the explosion and the fires that engulfed Halifax’s North End.

“The sight was awful, with people hanging out of windows dead. Some with their heads missing, and some thrown onto the overhead telegraph wires,’’ a firefighter recalled at the time. 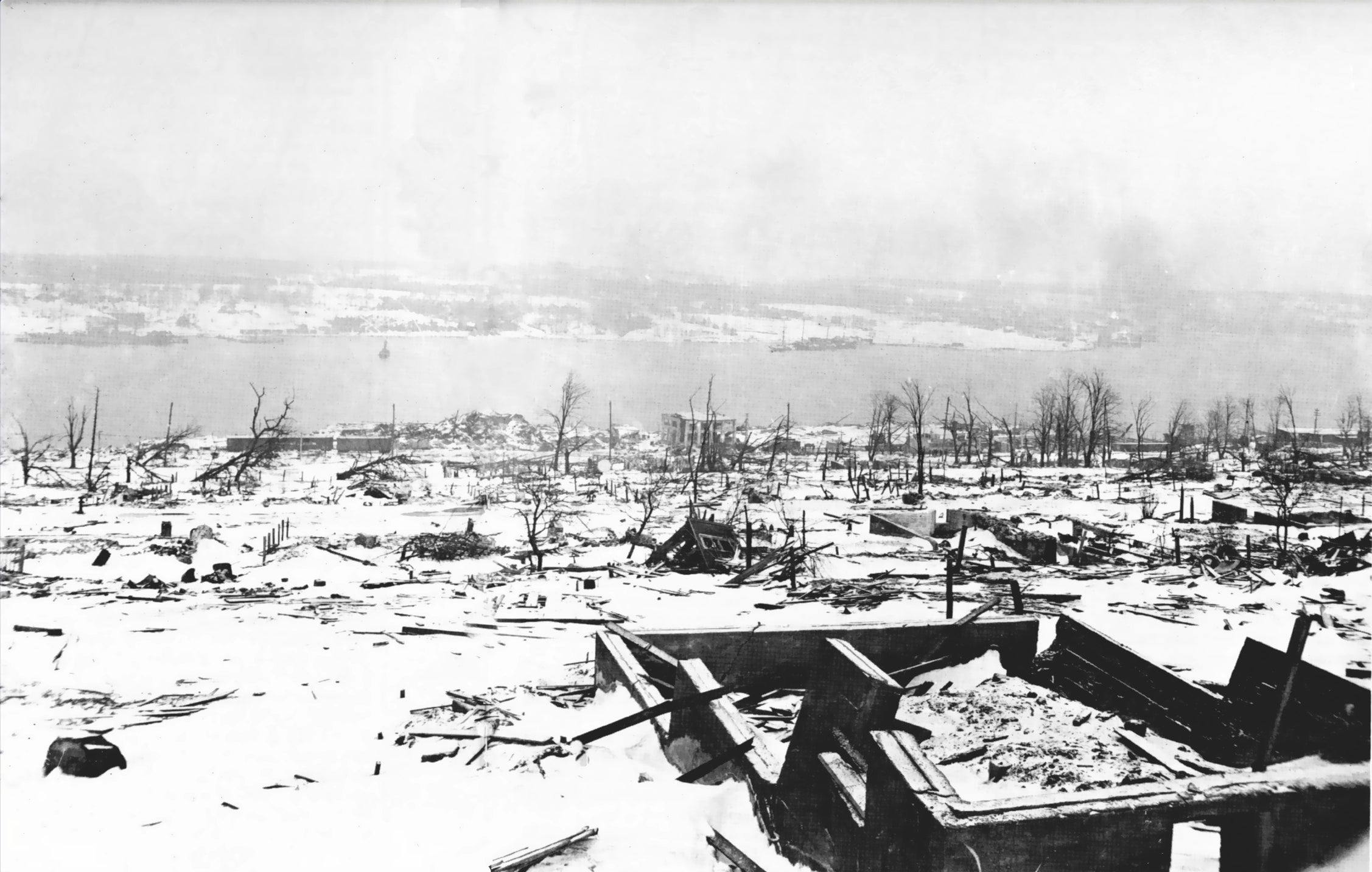 The Narrows from Halifax after the explosion and blizzard. The Imo can be seen in the background on the shore of the Dartmouth side of the harbor.

According to the CBC, 9,000 people were injured by the blast, as well as “falling buildings and flying shards of glass.’’

Churchill said that his great-grandmother, pregnant with his grandfather at the time, suffered burns and a concussion due to the explosion.

“She was far enough away that she wasn’t killed, but a lot of people weren’t so lucky,’’ he said. “It touched the lives of a lot of Nova Scotians outside Halifax.

To this day, the Halifax explosion remains one of the largest non-nuclear explosions in human history — and the third deadliest. The city was devastated.

Reports of the explosion traveled quickly.

“Halifax Swept By Flames After Explosion, 2000 Dead,’’ read a Boston Globe headline the next morning.

Despite an oncoming blizzard that would cut off Nova Scotia, Boston Mayor James Michael Curley sent a message to the U.S. representative in Halifax hours after the explosion, per a Globe article December 7.

“The city of Boston has stood first in every movement of similar character since 1822,’’ Curley wrote, “and will not be found wanting in this instance. I am, awaiting Your Honor’s kind instruction.’’

Curley did not fall through on his pledge.

Curley and Massachusetts Gov. Samuel McCall composed a Halifax Relief Committee to raise funds and organize aid. Relief ads were printed in the Globe. McCall reported that $100,000 had been raised within the first hour. After speaking with President Woodrow Wilson, Curley was able to secure a $30,000 carload of Army blankets to send to Halifax.

Tracks through the Northeast were cleared for a train departing North Station 12 hours after the explosion. The train brought 30 “of Boston’s leading physicians and surgeons, 70 nurses, a completely equipped 500-bed base hospital unit and a vast amount of hospital supplies’’ for the estimated 20,000 destitute survivors, reported the Globe.

The train was scheduled to reach Halifax in a record 22 hours, but was delayed by deep snow drifts brought by the blizzard. It arrived the morning of December 8, the first non-Canadian relief train to arrive, to two-square miles of “burned-out, blackened ruins,’’ which had just been hit with 16 inches of snow, recalled a 1967 Globe article. Hospitals were already overflowing and a local school had to be used as a morgue.

Relief workers were organized into groups to deal with basic necessities and quarters were arranged for doctors and nurses in private homes outside the hospital. Within less than a day of their arrival, a fully-equipped and running impromptu hospital had been set up in a former military officer’s residence, reported the Globe.

On December 9, by the time a second train arrived, Halifax announced it had enough doctors and clothing for its immediate needs, and the Globe reported the city was “rallying bravely’’ from the disaster. Total relief contributions from Massachusetts totaled over $750,000.

The Boston Symphony even performed a sellout benefit concert the next week for Halifax relief, according to the Globe.

“On behalf of the Government of Canada, I desire to convey to Your Excellency our very sincere and warm thanks for your sympathy and aid in the appalling calamity which has befallen Halifax,’’ wrote Canadian Prime Minister Robert Borden to McCall on December 9. 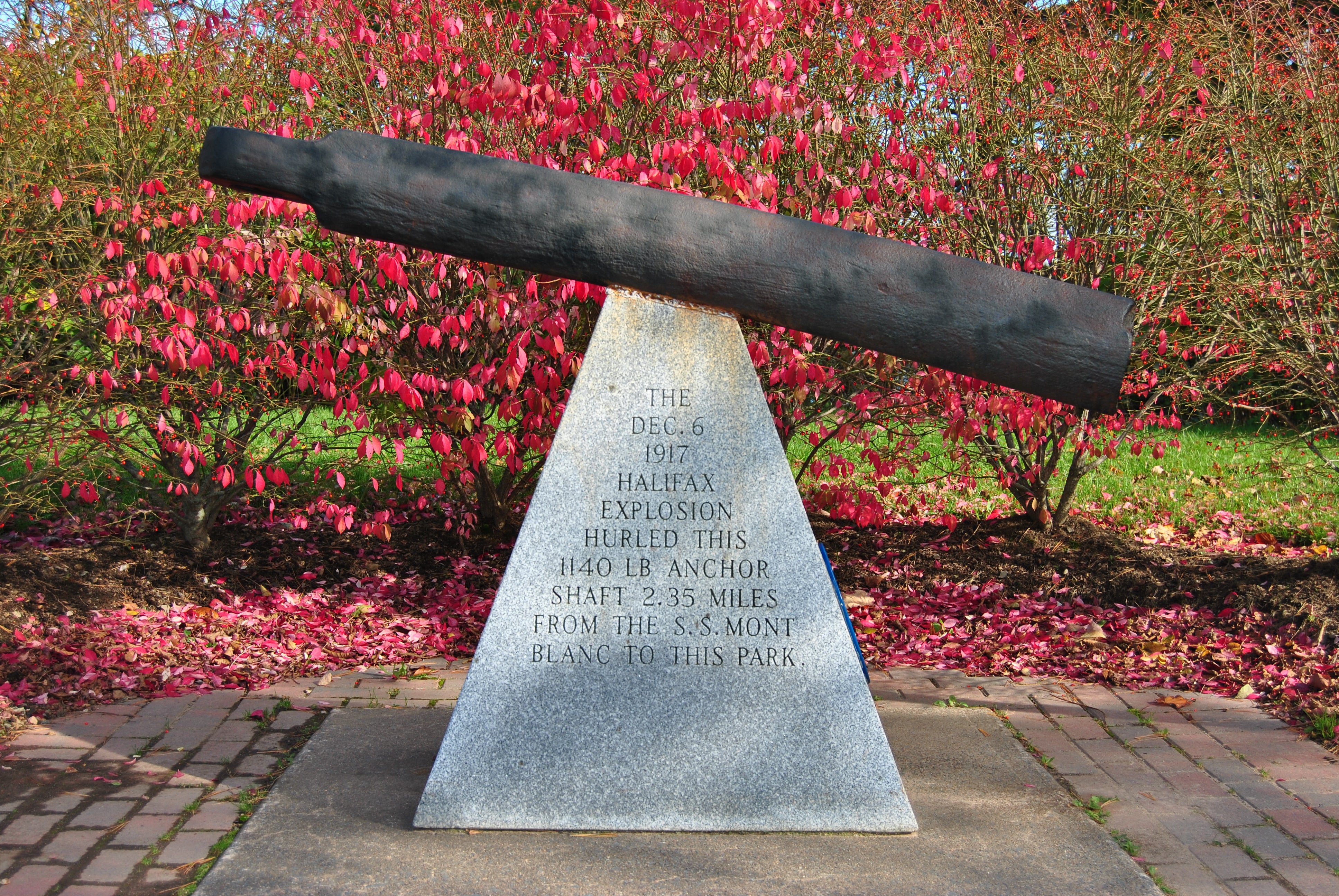 A monument stands in a park where the Mont-Blanc’s anchor landed, more than two miles away from the explosion.

And in 1971, it became an annual tradition, a symbol of Nova Scotia’s gratitude, said Churchill.

“In a small community, when something happens to a family, it’s all about casseroles and hugs,’’ Roseann Misner, the donor of Boston’s 2010 Christmas tree, told the Globe. “When the explosion happened, it was in the form of the relief effort from Boston.’’

Now, throughout the year, an employee in the Nova Scotia Department of Natural Resources — with the title of “Christmas Tree Specialist’’ — keeps an eye out for a worthy evergreen.

When they find it, the province holds a celebratory tree cutting ceremony and, the next day, a send-off parade in downtown Halifax. The festivities even include @TreeForBoston Twitter and Facebook accounts to follow its journey to the Common.

Churchill said that it’s a tradition that is highly celebrated in Nova Scotia and a great honor for the landowner from where the tree comes.

“This year in particular, given the recent events in Paris, everyone was really focused on the season of spirit, compassion, and generosity,’’ he said.

“There’s a great sense of pride here to continue to show Boston thanks.’’ 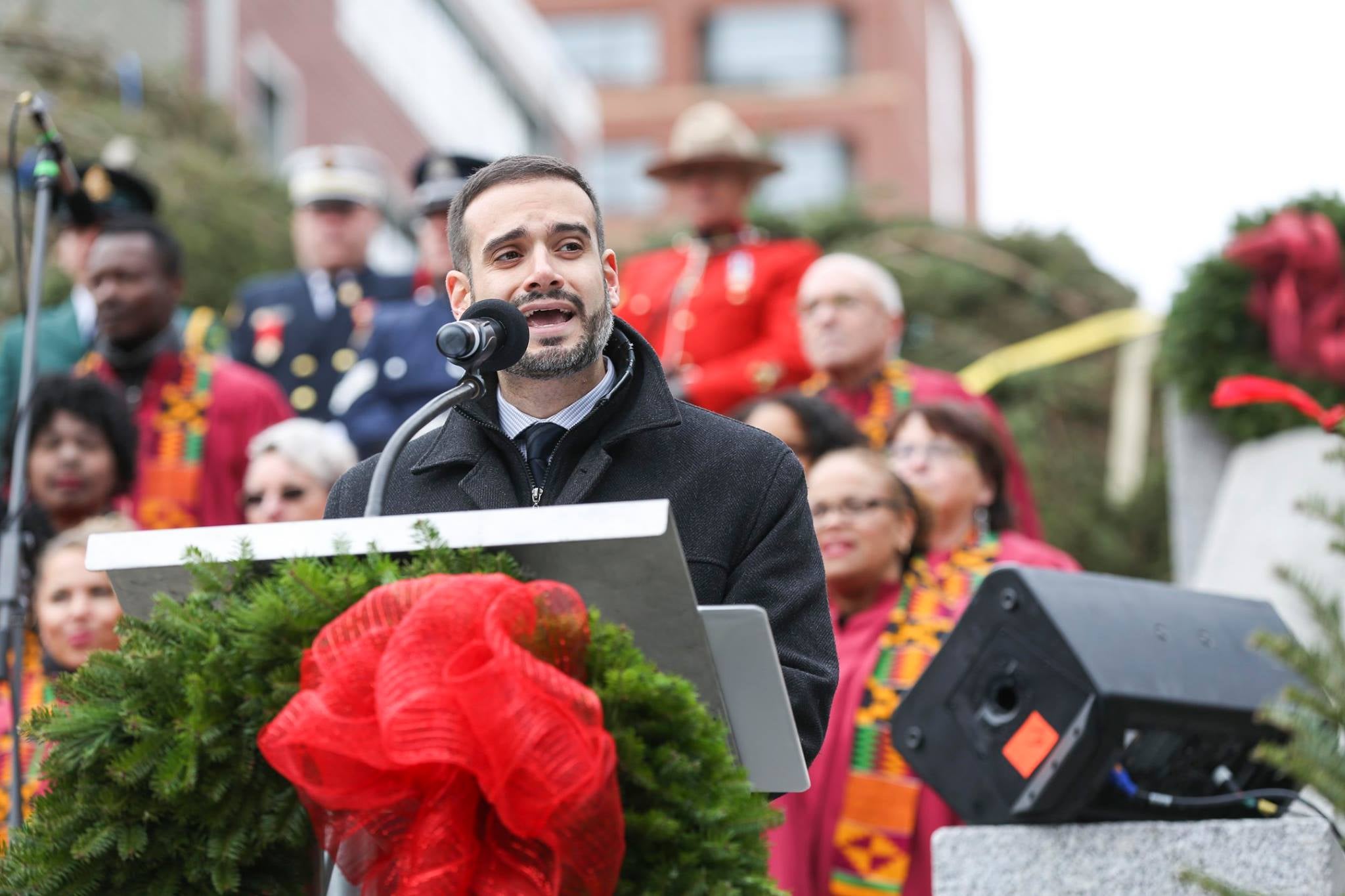 Nova Scotian Minister of Natural Resources Zach Churchill speaks November 18 at the send-off of the 2015 Christmas tree for Boston.

Christmas tree from Nova Scotia to be lit at Boston Common