The MBTA’s arch-nemesis made its first appearance of the season Tuesday morning, as winter sprayed a mix of snow, sleet, and freezing rain on Greater Boston commuters.

It was just an inch or so of snow, and it came during school vacation week with many commuters at home. But those factors made for a useful winter trial run for the MBTA and its new storm response processes, General Manager Frank DePaola said.

“This is a good way to break in to the use of the new system,’’ he said in a morning interview. “There’s a lot of procedures. This is the first time we’ve had a live test of it. With low ridership and relatively minor storm conditions, it’s a good way to break things in.’’

A series of feet-high snow storms last winter caused widespread delays, shuttered much of the T for days at a time, showed major weaknesses in the aging infrastructure, prompted the resignation of former GM Beverly Scott, and cast a still-shining public spotlight on management and financial practices at the MBTA.

Last winter’s transit crisis came later in the season. The problems were exacerbated by several inches of snowfall, sustained freezing temperatures, and normal commuting patterns—factors the T did not face Tuesday. Still, the first snow of this season represented an opportunity for the agency to give its new storm response systems a whirl.

The MBTA moved to better equip its system for snow and freezing temperatures this year as part of an $83 million winter resiliency plan. The upgrades include replacements of stretches of the Red Line’s electrified third rail, new snow removal equipment, and new infrastructure on the Orange Line.

Additionally, the T has created a storm-tracking center to improve snow response efforts and communication with the public during winter weather.

The new “emergency snow desk’’ was staffed starting at 8 p.m. Monday night, DePaola said. The T also used de-icing fluid on the third rails of the Red and Orange Lines overnight in anticipation of the storm, another new practice this year, he said.

Despite public skepticism, officials have promised a better winter on the T this year compared to last. That isn’t a particularly high bar to clear, and the T wasn’t without its issues Tuesday.

The Red Line’s Braintree branch experienced severe delays early in the morning because of a frozen switch near JFK/UMass station.

DePaola said he was pleased the issue was dealt with “relatively quickly.’’ He credited the new storm response system, which includes the deployment of about 300 additional employees at stations throughout the system to report and address issues.

The T, which boasts a $7.3 billion maintenance backlog, also faced some of its normal daily issues Tuesday morning. The Green and Orange Line each saw morning delays due to disabled trains.

The Green Line’s B branch saw significant delays for a chunk of the afternoon, and required shuttle service from Babcock Street to Boston College due to an issue with the electrical wiring overhead. The cause was not weather-related, Pesaturo said.

And the Blue Line had to replace service with shuttles around 5 p.m. after a metal grate in the tunnel’s ceiling came loose and required urgent repairs, Pesaturo said.

Gallery: Boston gets its first snow of the winter season 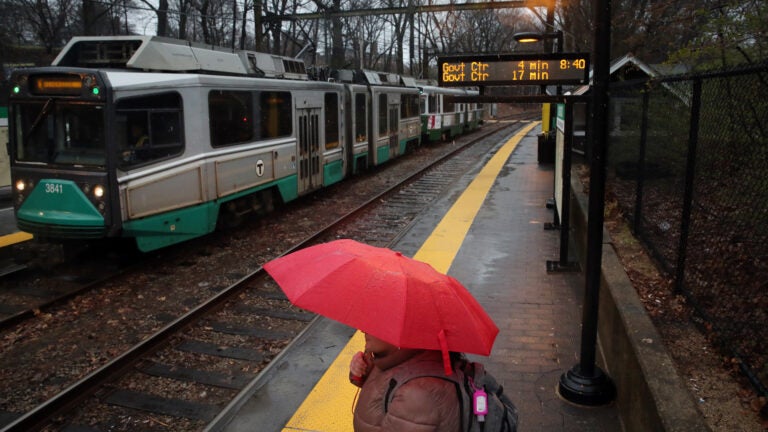