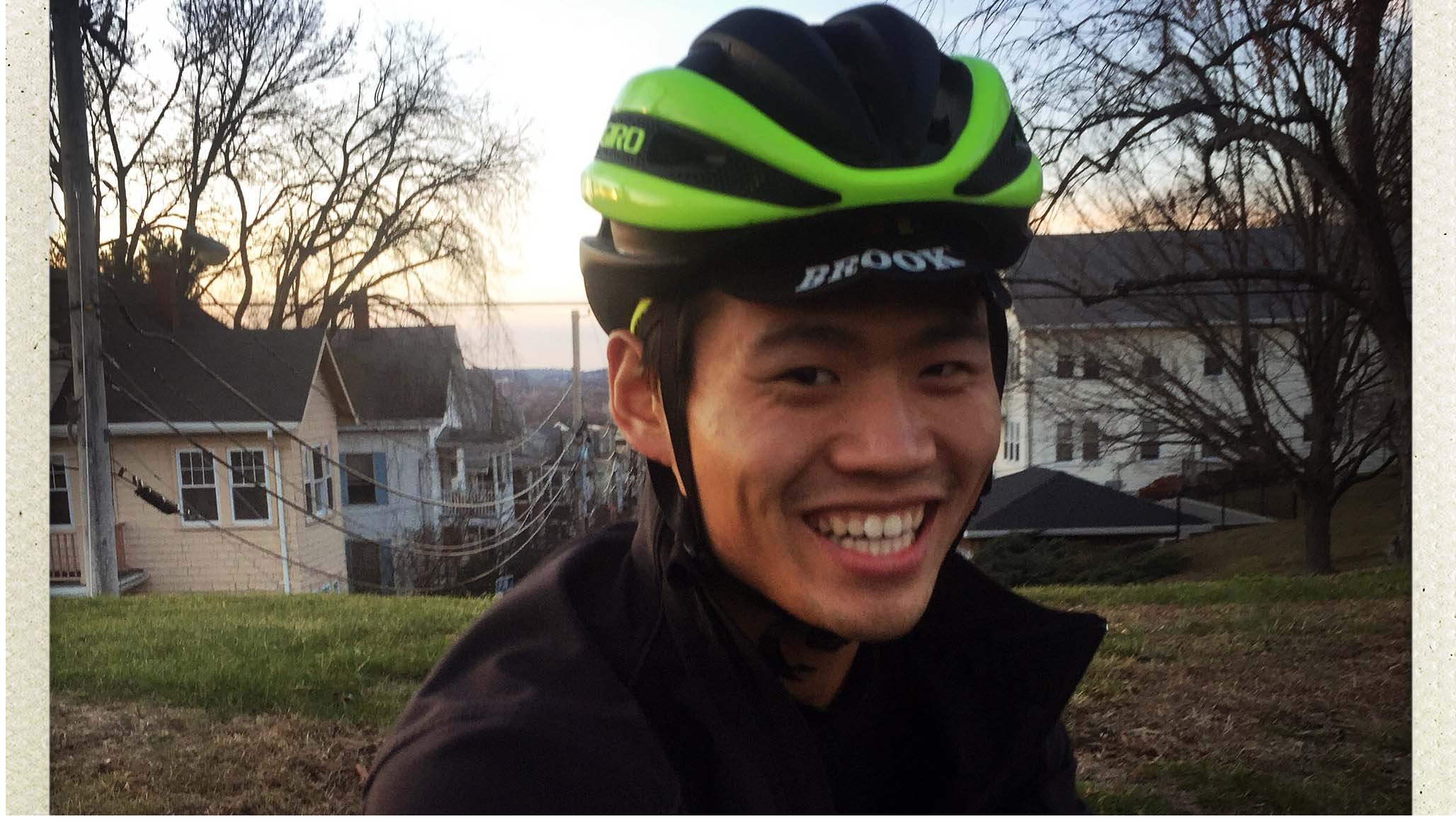 JJ Zhou is a senior at Tufts University.

JJ Zhou had only been riding his bike for 10 minutes when he pulled over to the side of a Connecticut road and began pounding the ground with his fist. He was on day three of what he expected would be a month-long, 1,650-mile ride from Boston to Orlando, and he felt a shooting pain in his tailbone that caused him to recoil as though he were touching a hot stove every time he sat down on the bike seat.

Zhou, a senior at Tufts University, began his ride on December 21. The idea to pedal down the East Coast came to him while he was having Thanksgiving dinner at his uncle’s house in Charlotte, North Carolina. At the time, he was thinking about how to best prepare for the upcoming crew season at Tufts.

Every winter break, Zhou and other members of the Tufts crew team train rigorously before the start of the spring season. Zhou figured he could spend his last college winter break doing cardio and weight-lifting workouts near his uncle in Charlotte, or he could stay in Boston, though he said he’d rather not endure any more of Boston’s winter than was absolutely necessary.

A Chinese citizen, Zhou also realized that in his time in the U.S., he hadn’t seen much of the East Coast. Unless he finds a job, he’ll need to go back to China once he graduates this May.

So he decided that the month-long break was the perfect time to see the open fields, big skies, and country houses he’d imagined lined the East Coast. He’d never been a fan of driving or flying, so he decided to take his preferred mode of transportation—his bike.

He also wanted to give even more meaning to the trip. Zhou is an aspiring photographer and decided that he would dedicate his ride to raising money and awareness for Reporters Instructed in Saving Colleagues, an organization that trains freelance journalists to treat life-threatening injuries on the battlefield. The training is free for reporters; but the organization offsets the $1,600 cost. Zhou’s goal was to pay for training for five journalists, so he set his fundraising goal for $8,000.

He set up a tumblr account to track his travels, as well as a fundraising page. He made plans to stay with classmates who lived in the Northeast, and would sleep in hotels or at family friends’ homes once he crossed the Mason-Dixon line. His goal was to bike six hours, or 80 miles, each day. Before this trip, the most he’d biked in one day was 108 miles, and, that time, he was able to rest the day after.

“I didn’t do any special training for this ride,’’ he said. “I’ve incorporated biking into my training for one to three hours a day since my junior year, so I already had my bike and gear. I tested out riding with my bag and computer the day before I left and thought, ‘I feel okay! I can do this for 80 miles per day for 20 days, right?’’

Sort of. The first few days were tough, Zhou said, because he pedaled directly into a strong headwind. But nothing was as bad as the third day, when he encountered a bump in the road.

Zhou was walking down the steps of a friend’s house in Connecticut while wearing his bike shoes. The steps were slick with rain from the night before and he slipped and fell directly on his tailbone. He tried to continue on, but the pain was excruciating. Frustrated New England drivers cut close to him and honked as he slowly made his way along the side of busy roads.

“I felt like I was going to throw up, so I stopped at a healthcare center and they told me I needed to rest so the bruising could heal itself,’’ he said. “My friend picked me up, and I spent Christmas in New York with him and his family, which was great, but I felt like I was wasting time by not being out there on the bike.’’

Four days later, armed with chamois cream (to prevent chafing) and bananas (he eats one every hour), Zhou hit the road again. So far, Zhou said he’s seen everything he’d dreamed he would on the East Coast—open fields, big skies, and country houses.

He’s also encountered a few unexpected surprises. Even though he’s spent the past three-and-a-half years going to school near Boston, he was shocked to see 16 Dunkin’ Donuts along the New London Bridge. And, though he hoped to see dogs running across the hills, he didn’t expect to have an angry one chase him and send him into a furious pedal to escape.

It hasn’t been easy. Many of his tumblr posts are tagged with the word “#suffer.’’

Before he set off, Zhou wrote on his blog: “Suffering makes life real. Without it, life becomes comfortable.’’ He said he thinks about this as he rides along, his tailbone throbbing. But he would much rather train by biking down the East Coast raising money for a cause he cares deeply about. So far, he’s received $935 in contributions, which he knows is a long way from his goal.

“It’s also about raising awareness,’’ he said. “These people are reporting on really important stories, and it’s worth raising money for them.’’

Zhou took another short break in Charlotte at his uncle’s house last week to help heal his tailbone before continuing on. He has less than 450 miles to go before classes start on January 21. He knows he’ll make it.

During his first day back on the road after his stay with his uncle, he pulled over in Camden, South Carolina to rest.

No one honked. Instead, a driver stopped and asked if he was all right.