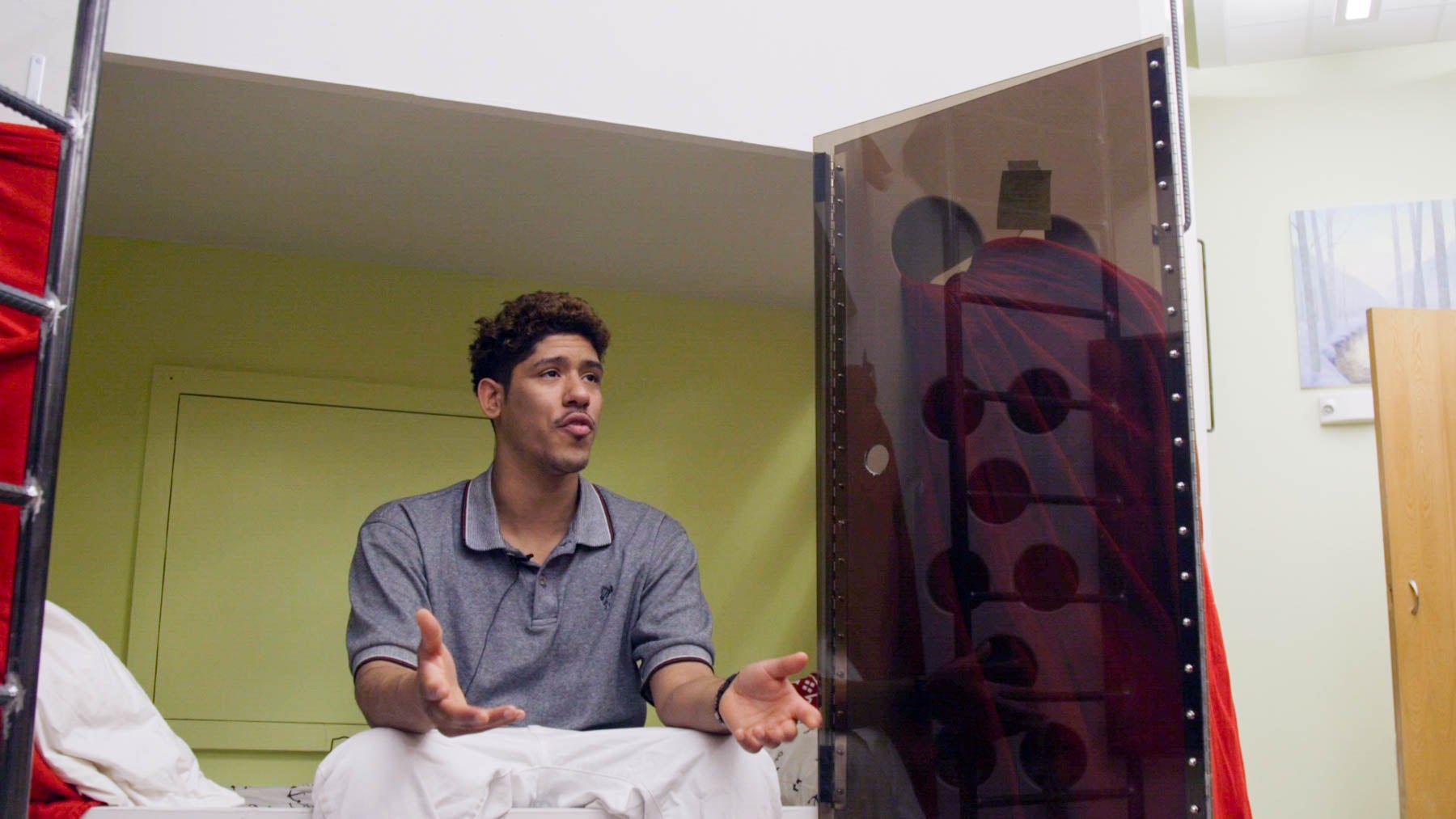 When 22-year-old Tony LeBron spent his first night at the newly-opened Y2Y Harvard Square homeless shelter, he said he felt safer than he has in a while.

“I’m so used to everything going wrong,’’ he said, while sitting on the shelter bed he’ll have for 30 days in the basement of First Parish Church. “You never get what you ask for at other shelters. When am I gonna feel secure?’’

LeBron grew up within the Department of Children & Families and has been homeless for about three and half years. Now he bounces around from area to area.

“When I came in [to Y2Y], it was like, it’s not how you would normally feel when you walk into a shelter,’’ LeBron said. “Normal shelters usually [have] like, a lot of depression. … When I came in here, everybody was happy, everybody was laughing. It was just a space where you felt comfortable, where you could call your own.’’

For founders and Harvard grads Sarah Rosenkrantz and Sam Greenberg, that’s exactly what they were going for. Still, they said it’s so much more powerful to hear it coming from someone staying at the shelter they created. Y2Y officially opened its doors on December 22 and was full within three days.

Rosenkrantz and Greenberg have been working toward this goal for about four years, and it was made possible with plenty of donations through the project’s construction company, Skanska, and an Indiegogo fundraiser.The two founders volunteered at the Harvard Square adult homeless shelter while in college and noticed that youth homelessness in the Boston area wasn’t really being addressed.

Story continues after this video:

LeBron has been homeless for about three and half years, since he aged out of the Department of Children & Families care. Once he reached a certain age, he said, there was basically nothing they could do for him.

Y2Y Harvard Square offers 22 youth beds for 30-day stays at a time, provides breakfast and dinner, and offers the opportunity to meet with caseworkers and prep for jobs. Each bed — there are nine on the first level, nine bunk beds, and four ‘treetop’ beds accessed by ladder — features a locker, reading light, and outlet. In the center of the space, towers have lockers on one side and closets to hold donated clothing on the other.

The shelter is completely student-run, with about 200 total volunteers and a leadership staff of 30 students. Volunteers work about 10 hours a week and handle everything from running to BJs for food and supplies to helping write grant proposals, Greenberg said.

Greenberg and Rosenkrantz formed a Youth Advisory Board to help consult on what exactly a youth-oriented homeless shelter needs. Kitty Zen, youth advocacy coordinator for Y2Y, had unique insight because she’s used shelter services herself. She first heard about the beginnings of Y2Y while at Youth on Fire, a drop-in youth homeless shelter.

“My first introduction to this project was Rashmi [Ramaswamy, a project manager from Studio G, the architecture firm of the shelter], and it seemed like a dream,’’ Zen said. “‘Wouldn’t it be great to have overnight beds?’ There’s no youth shelter space in Boston other than this one.’’

Zen said that, though she hasn’t been in a college dorm herself, she could see that space as an example of a way to create a home base for young adults. She wanted to provide as much privacy as possible while still maximizing space.

For LeBron, that design allows him to relax, but the best part of the shelter is the people who work there.

“[It’s about] emotional stability,’’ he said. “I’ve taken a couple of people aside and poured my emotions out because, you know, it’s stressful going through what I go through on a daily basis. People here are very accommodating, and its well appreciated.’’

“I’m just as proud that we have good people and empathetic people that care and listen and are learning,’’ she said. “Because this is just a learning process. Ant that makes me as warm inside as the space [itself].’’