When Sharlene Ryan woke up Sunday morning, a Facebook post saying cars in her town of Auburn were damaged overnight sent her into the driveway to inspect her own vehicle.

That’s when she discovered the rear window of her 2003 Honda Pilot was hit.

“The entire window was shattered,’’ said Ryan. “Probably a 5 or 6 inch gaping hole.’’

She got to work with gloves, duct tape, and a bag, securing the area until she could have it fixed.

“I was like, ‘Are you kidding me?’’’ said Ryan. “All I wanted to do is leave the house in the morning and visit my mother because she’s been sick.’’

Ryan was one of 19 people whose cars were damaged during a BB gun shooting spree over the weekend, according to Auburn police. Police say the destruction of property happened between 10:30 p.m. Saturday and 1 a.m.

The shooter, once caught, will likely face multiple counts of wanton destruction of property over $250, a felony, said Mills.

“Some vehicles had multiple windows shot out,’’ said Mills. 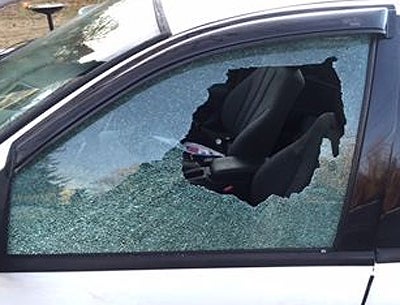 Another car damaged in the spree.

Police believe the shooter did the damage by car, not on foot, said Mills.

“I do think it’s kids,’’ said Mills. “Somebody probably got a BB gun for Christmas.’’

Police are investigating the tips they are receiving and pursuing video surveillance from a convenient store located across the street from one of the damaged vehicles, said Mills.

“We’re hoping we’re going to be able to pick up the plate or even a vehicle type [from the video],’’ said Mills.

Ryan said she was lucky that her insurance covered the cost of the damage.

“It would not have been cheap to fix,’’ she said.

Her car was fixed on Monday.

The last time a shooting incident involving BB guns and significant property damage happened in Auburn was about 10 years ago, said Mills, when someone “went on a tear for a day or two’’ and shot at multiple homes.

Police are asking the public to call Auburn police at (508) 832-7777 with any information about the shooter.