If this region were hit by a nuclear bomb, the people ultimately in charge of keeping Massachusetts safe would be sitting about 40 feet beneath the earth in Framingham.

At least that was the idea when the Commonwealth’s underground bunker, a sprawling acre of hallways and rooms, was built in 1963. It now houses the Massachusetts Emergency Management Agency, the arm of government that activates when disaster strikes or big storms hit.

“We are the orchestra leader, if you will,’’ said MEMA spokesman Peter Judge as he stood in the bunker’s main hallway, his blue pullover emblazoned with the state seal. “When we activate the operation room, it holds officials from 30 different agencies and organizations.’’

When New England was buried under unprecedented levels of snowfall last winter, leaders of various transportation agencies, local governments, and public works departments gathered in the bunker to dispatch equipment and monitor everything from power outages to roof collapses. When two pressure-cooker bombs exploded on Boylston Street during the 2013 Boston Marathon, the bunker served as a main control room. When a plane with a potentially sick passenger was flying into Logan Airport during the ebola crisis in 2014, its dispatchers ensured that people from the Department of Public Health were on the tarmac when it landed.

For all its import, the bunker keeps a low profile. From the outside, there’s little evidence that it even exists. The entrance is built into a sloped grassy knoll on the edge of parking lot. The surrounding area is nondescript and suburban, but in the early 1900s, it served as the field where troops would muster before boarding ships that took them overseas to fight in World War I.

Once you find the door and press the buzzer, you enter a small foyer that looks more like something out of a 1960s film than the entrance of a modern government agency. From there, the only way to go is down, following a zig-zag of sloped hallways that take you past several huge metal blast doors, each weighing 6,000 pounds. MEMA used to be called the Massachusetts Civil Defense Agency, and the sign in the foyer seems like something out of a 60s film.

At the height of the Cold War, then-President John F. Kennedy Jr. wanted to be sure that if major cities were hit by a nuclear bomb, government officials could go somewhere to wait for the nuclear fall-out to subside. That explains the labyrinth of ramps, the heavy doors, and the two feet of reinforced concrete surrounding the underground rooms. Because gamma rays only flow in straight lines, the turns of the hallway are intended to mitigate the level of radiation that could make its way through the building.

“Essentially the idea was continuity of government,’’ said Judge. “That if a nuclear attack hit Boston, or really anywhere in the country basically, and we’re getting ready to go to war—nuclear war—the governor and basically 300 folks who were going to run the state government could descend here in Framingham.’’

On the wall behind him hung a letter from JFK’s special assistant Kenneth O’Donnell that expressed regret that the president wasn’t able to attend the groundbreaking ceremony on November 16, 1963. Eerily, the letter is dated November 22, 1963—the day Kennedy was assassinated.

Thanks to Kennedy’s Massachusetts roots, he was able to secure the funding for this bunker, which is “built like a battleship,’’ before those of other states, Judge said. When it was completed to the tune of $2.5 million (or about $19.5 million today adjusted for inflation), it was stocked with enough food to keep 300 people alive for 30 days.

Today, about 60 government employees work out of the bunker every day. MEMA’s headquarters, formerly called the Massachusetts Civil Defense Agency, were moved into the bunker in the 1970s so that the space could be used full-time, rather than just in the event of nuclear disaster.

Judge walked down a hallway and into the communications center. Three people sat in the dark, illuminated by computer screens and televisions that blinked and buzzed, alerting them to situations to monitor. The bunker was supposedly built on hydraulics, Judge said, with flexible pipe connectors so that they move with the building during a seismic event.

“It can move a foot up or down, left or right. We’ve tried, but we’ve never gotten it going, but we’re buying that anyway,’’ Judge said,laughing as he jumped up and down a few times in an effort to shake the building.

Back in the hallways outside the communications center, Judge led the way through a metal door and into a boiler room filled with whirring heaters and ventilators. He pointed out three backup generators, then walked a little ways back into the cavernous room and pointed to a metal box about six feet high and three feet wide.

It’s a morgue. Back in the ’60s, the powers-that-be decided that if 300 people had to shelter in the bunker for 30 days, the stress of the whole situation would mean that two people would probably die of natural causes.

Judge opened it and pulled out one of the trays, which was filled with extra supplies like paper towels and cleaning solution.

“I always consider getting a blow-up doll to stick in here to scare people when they pull it out,’’ he said. “So they go, ‘Whoa!’’’ 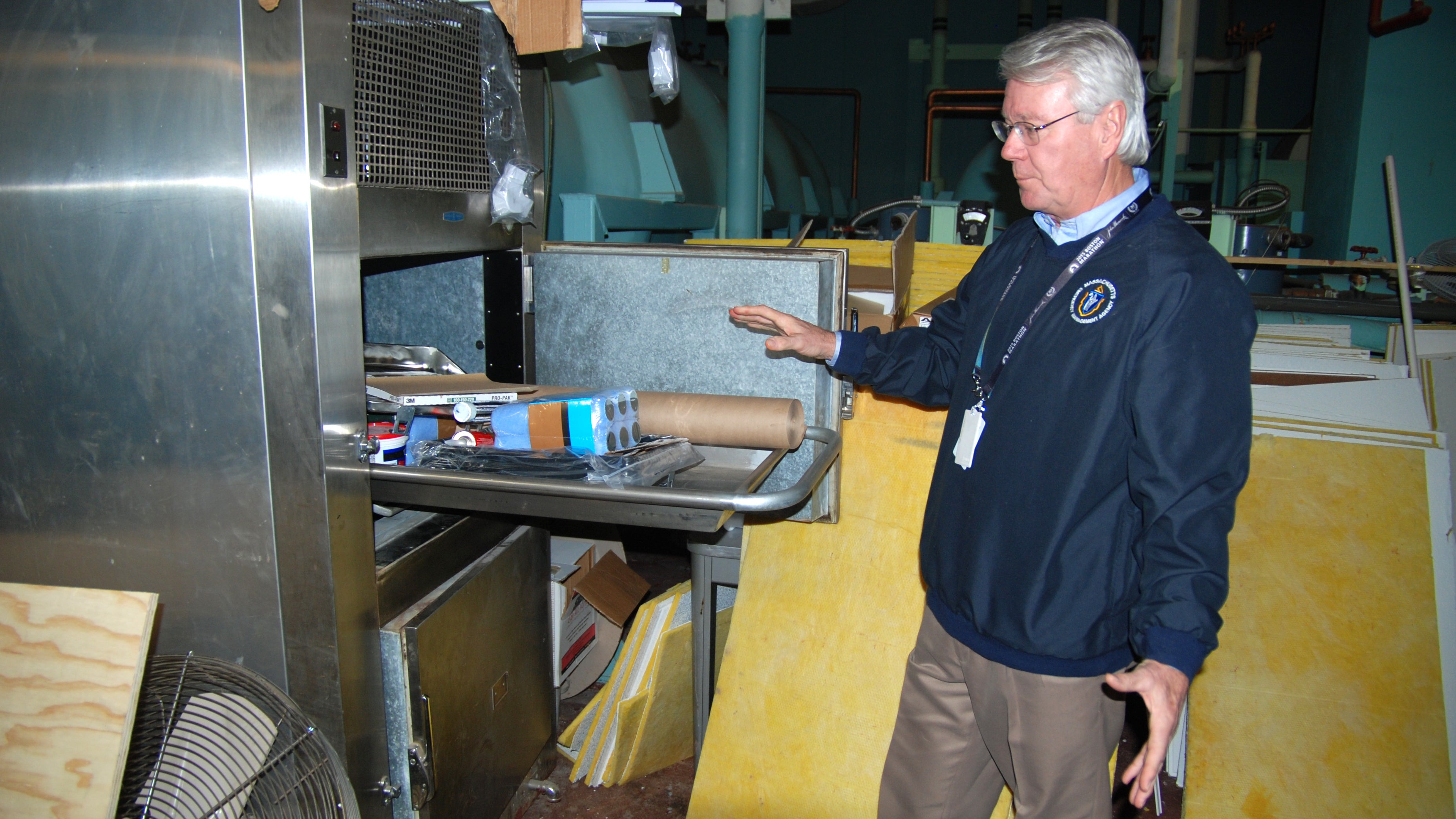 Judge shut the door of the morgue and continued the tour. He showed off the rooms that once held bunks and now house conference tables, and led the way into the main communications room where the different agencies gather during an emergency.

On Sept. 11, 2001, former Massachusetts Gov. Jane Swift and a team of agency heads gathered in the bunker as the terrorist attacks unfolded. In this room, they responded swiftly to a request for delivering donated blood to New York City, which was shipped by plane a day later, Judge said.

“You come down here, you see how [the bunker] is set up and how it works,’’ he said. “And people say, ‘Oh, no, hopefully we won’t have to activate,’ but we will activate at some point. We’re going to have something.’’