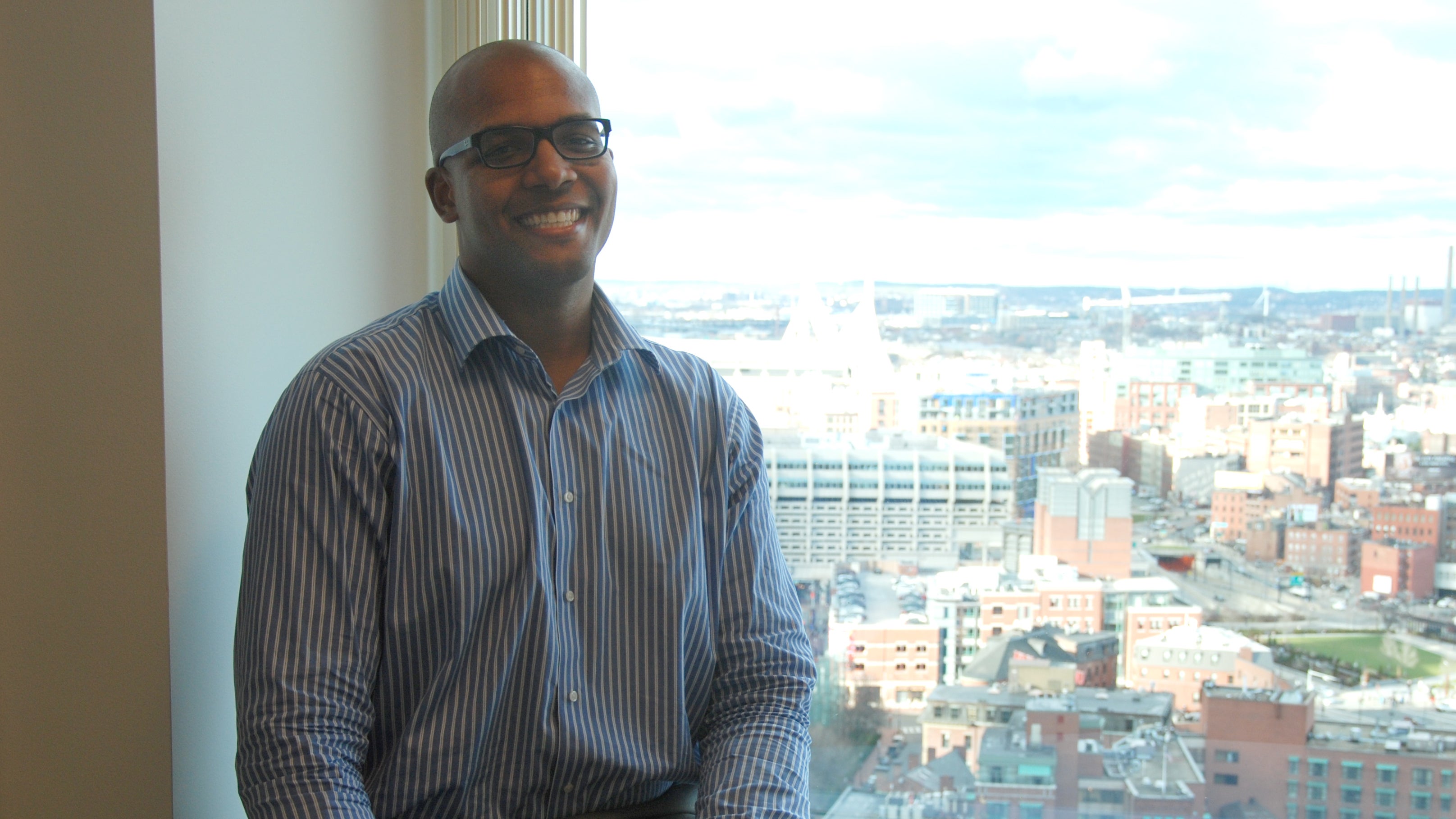 Marquis Taylor is used to having one foot in two different worlds.

This becomes clear as the founder of Coaching for Change recounts his life story at Espresso Love, a coffee shop near his State Street office one cold weekday morning in Boston. People in suits line up for coffee behind the table where he sits. Taylor used to wear one, too, when he worked in finance. These days, however, the very tall, very built former basketball player is more likely to rock an outfit like the one he’s wearing today: a pair of jeans, a nice sweater, and Bridgewater State University hat.

That’s because Taylor now spends his days devoting his time to Coaching for Change, a nonprofit after-school program currently operating in Brockton and Easton that aims to create a pipeline for sending underprivileged kids to college by teaching them how to coach elementary and middle school sports. He hopes the program will provide low-income kids with the support that many students in more affluent areas take for granted.

“Schools and school systems are so overstretched,’’ he says. “If you look at the suburbs, the parents are hoverers. In the inner city, it’s not that way for a myriad of reasons. I hate when people start trying to put explanations to it. It’s like, you don’t know that situation.’’

Growing up in South Central L.A., Taylor had been involved with a program called Project Coach, where the theory was that if you can teach a kid to coach, they can graduate from college. He liked that model, but he also saw too many programs that focused on either high achievers or the kids with the biggest issues. He wanted his program to focus on the kids in the middle who got passed over.

“It’s those on the fence, who can go either way but don’t have the access and opportunity to build and develop skills, who are often completely ignored,’’ Taylor said. “Teachers are like, ‘I gotta make sure this high-achieving kid is killing it, and I gotta make sure this kid’s not slapping another kid in the face.’’’

Keeping kids engaged is the whole key, Taylor argues. Looking at a textbook, their eyes glaze over. But playing sports, keeping stats, learning how to analyze the numbers and writing game recaps makes learning fun. And feel less like school.

Students from nearby Stonehill College—where Taylor teaches two classes—and Bridgewater State advise the high schoolers. Some of the kids who’ve gone through the program are now his students at Stonehill.

Last year, 60 percent of kids in the Brockton program improved their GPA by .6. Brockton’s crime rate was almost twice that of the average U.S. city in 2013.

“The data piece is what keeps me going,’’ Taylor says. “Because youth development is a business of uncertainty and ugliness. Kids have a bad day, adults have a bad day. This feedback from the data lets us know we have improved, we’re doing something correctly.’’

But Trevor Packard, a senior at Bridgewater State and Coaching for Change fellow who grew up in Brockton, says it’s about more than the numbers.

“You’re with the kids for an entire semester, we build a relationship with them,’’ Packard said. “The first few days are always rough—they don’t come from the best parts of Brockton, they’re still looking at it as being in school and being forced to be there. But by the end, you really see them grow as a person.’’

Taylor, 32, was born in Los Angeles, where he excelled in school and on the basketball court.

“I benefitted from the sports world,’’ Taylor says. “And what I mean by that is that I was good enough to go to private school and get financial aid.’’

That private school was the Naval Academy in Newport, Rhode Island, where Taylor spent a postgraduate year after high school and played basketball. It was very white, he says, in stark contrast to the diversity he was used to in L.A. It was also quiet. Taylor had never heard a cricket before he came east due to the constant sound of police helicopters—which he and the neighborhood kids called “dirty birds’’—hovering above his California neighborhood.

“In my neighborhood, I was the white kid because I articulated, I spoke well, I was smart, I studied,’’ he says. “And then in the ‘burbs I’m the poor kid who’s there because of basketball. You have to learn how to navigate it.’’

After graduating from Stonehill College in 2006, he started working in the subprime mortgage industry during the financial crash of 2008 (“it was wild’’), then for a real estate firm that owned property all over the country.

A work trip to the Mississippi Delta that made him realize the difference he really wanted to make in the world.

“That entire stretch from Kentucky to New Orleans feels like a third world country,’’ he said. “All they had are catfish farms and dilapidated houses. It’s like okay, do you work at Subway? Or do you just get a check? You work at a catfish farm, or just get a check? But I started realizing all this is around education and local political power.’’

Taylor didn’t want to get into politics, so he went back to school at Smith College to get his masters in education. From there, Taylor went on to found Coaching for Change. His narrative of living in two different worlds rings true for the college kids who work for him.

“I mean, Brockton and Stonehill could not be more opposite,’’ said Austin Vella, a Coaching for Change fellow and senior at Stonehill who also grew up in Brockton. “I went to Brockton High School, a school of 4000, and whites are a minority there. Going to Stonehill, it’s majority white, a very different culture. It’s definitely a challenge because a lot of kids from Stonehill don’t really understand what it’s like to grow up in Brockton and live in Brockton.’’

Vella said working with Taylor in a business environment, where there are weekly meetings and check-ins, provided him with valuable experience that will give him an advantage as he applies for jobs this coming semester. Taylor has shown him an alternative to simply working 9 to 5—he’s shown him that a job can be rewarding and can make a difference in the world.

“Marquis is an outstanding guy, a great guy,’’ Vella said. “He’s very motivated, he wants this company to thrive and he really cares about these kids. I can’t say enough about him.’’

The nonprofit has helped Taylor, too. He finally feels like he’s got two feet in the same place.

“I think I’m more centered,’’ Taylor says. “Now it’s about understanding how do we care for those kids, how do we partner with colleges, build a strong enough learning system to make sure we have quality control. I feel like I’m in the right place, now it’s learning and developing and honing my own skills.’’