In its heyday in the early 1960s, the all-male Harvard tiddlywinks team gathered in wood-paneled cocktail lounges wearing jackets and vests while cheerleaders in sweaters and long skirts lined the sides of the room. With plastic discs called “squidgers’’ in their hands, they crowded around the set like surgeons around an operating table, placing the squidgers precisely on the colored discs in order to fling them so that they landed in a red cup.

The goal was to “pot’’ as many colored discs, called “winks,’’ into the cup as they could.

“Tiddle the wink,’’ the cheerleaders would chant as they waved their pom-poms. “Apply game theory!’’

Nowadays, games played on long white tables with red cups have a certain connotation on college campuses — and generally involve beer. But back then, the unusual British parlor game of skill and strategy was the perfect sober pastime for unathletic collegians.

“We were nerds. Here was a game that did not require strength, and you didn’t have to run fast,’’ said Ferd Wulkan, who helped launch the game at the Massachusetts Institute of Technology decades ago. “But it also happened to have both physical dexterity and a whole strategy element. For us, that was very appealing.’’

Although the game once thrived at both Harvard and MIT, neither school has had an active tiddlywinks society in at least a decade. Now, on the 50th anniversary of the North American Tiddlywinks Association, which fostered competitive play between universities, the remaining players are left wondering who the next generation of winkers will be — and whether the game will continue to exist at all.

Listening to winkers talk about the game is like listening to a Harry Potter fan discuss the mechanics of a game of quidditch. The words are fantastical, but loaded with serious meaning. “Squopping,’’ for example, is what happens when an opponent flings a wink on top of another player’s wink, effectively putting it out of play. From “squidge-offs’’ to “nurdling’’ and “gromping,’’ players speak a secret language that hearkens back to another era.

College students first began organizing competitive tiddlywinks play at England’s Cambridge University in 1955, but the game didn’t make its way across the pond until a team from Oxford University took a tour of the U.S. in 1962, during which they played the “New York Football Giants’’ and took on a team of Harvard students. (Because no one in the states had ever heard of such a game, unsurprisingly, the Oxford team trounced everyone they challenged).

The Brits left some discs and cups behind, planting the first seeds of the game in the U.S. By the time Life magazine covered the sport late in 1962, the author said students were squopping on 25 college campuses nationwide.

How to play Tiddlywinks

A brief description of how to play Tiddlywinks

After reading the Life article, which detailed a team of Harvard students who played the game, Severin Drix decided that he and Wulkan, his best friend, would make the game their signature sport when they reached college. The son of Holocaust survivors who moved to Brooklyn from Germany in the 1940s, Drix had grown up playing the game in a cramped Brooklyn apartment.

But unbeknownst to them, many of the teams were fading in popularity by the fall of 1965. Determined to create a tiddlywinks renaissance, they launched teams at MIT and Cornell University, hanging signs around campus, attending activities fairs and diligently playing winks in the common rooms of their dormitories for hours on end.

Decades later, Drix is now known as the “foster father’’ of North American tiddlywinks, and most active winkers can trace their lineage back to him. Together, he and Wulkan almost singlehandedly created a tiddlywinks revival at Ivy League colleges that lasted years. 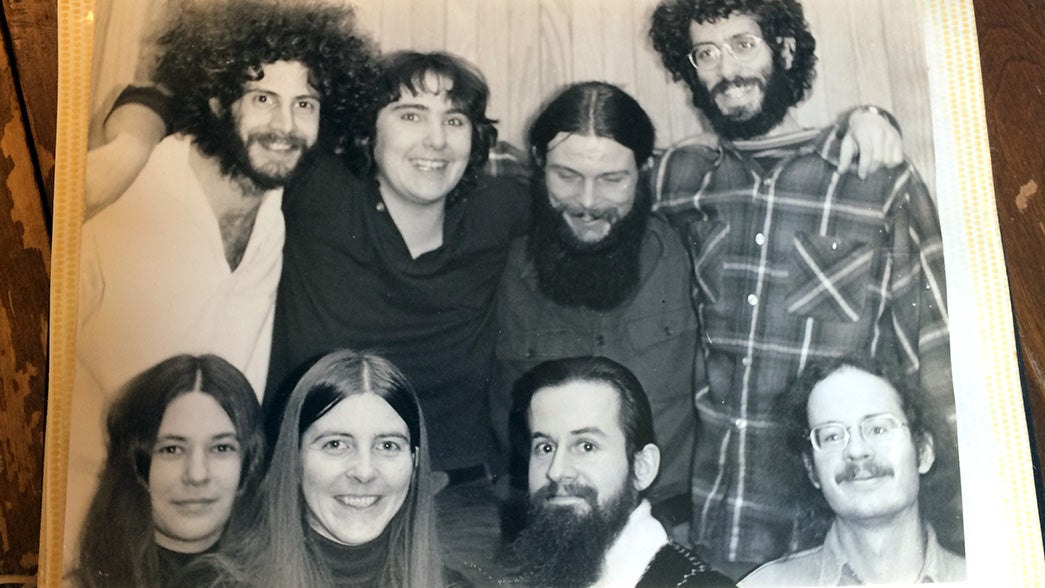 Ferd Wulkan, top left, and some of his fellow winkers.

“It was really the first indigenous winks movement,’’ Drix said. “It wasn’t necessarily all freaks, but a group in which freaks could be. In general, a much, looser, more informal atmosphere came in with the new winkers.’’

After they graduated, MIT became the bastion of American tiddlywinks during the sport’s golden era in the early ‘70s. That’s where Larry Kahn — now known as the greatest North American player of all time — often paired with Rick Tucker, a tiddlywinks historian who is writing a book about the history of the game.

“One of the best things about playing winks then was that there were so many people going to team events,’’ Kahn said. “You’d have 50 to 60 people playing, and, [one] time, we all got snowed in and had to stay an extra day. We were sleeping on Cornell winkers’ floors, and hanging out and getting to know each other. We had nothing to do but play winks.’’ 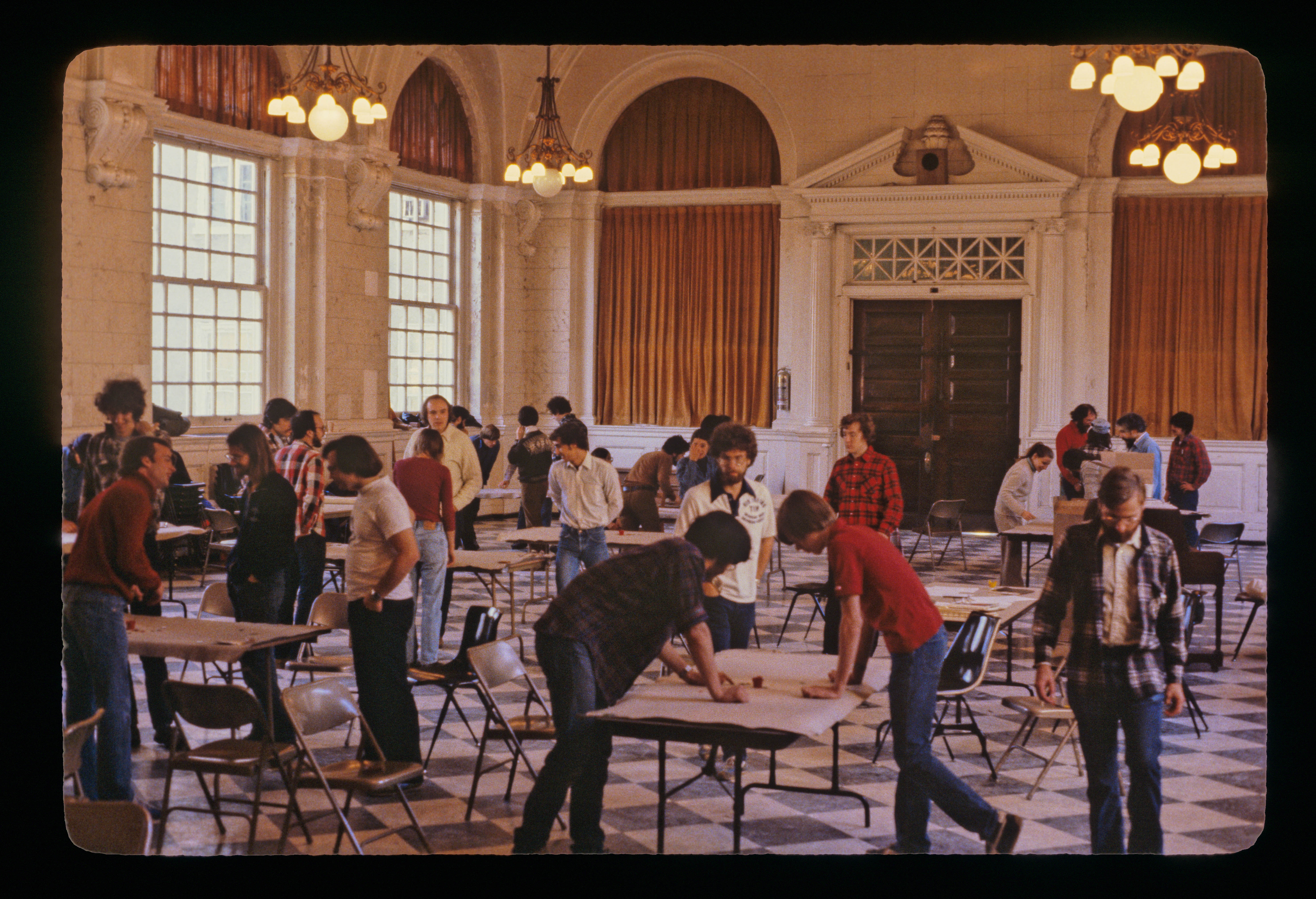 Winkers at the 1981 Continentals team championships at Haverford College in Pennsylvania.

In those days, tournaments lasted entire weekends. Except for lunch breaks and the occasional bye game, winkers would be potting for hours on end. The outside world ceased to exist.

“Some people think, ‘tiddlywinks is a simple thing, it’s beneath me,’’’ Tucker said. “But it was a group of people with something in common, with all different personalities, who all worked together. It gave us common ground. And that doesn’t exist in college anymore.’’

At MIT, Kahn and Tucker wrote themselves into the game by naming moves after successful attempts they’d had, hundreds of which are compiled on the tiddlywinks website.

But after they graduated, it was harder to find people who were fluent in the winks lexicon.

Kahn became an ocean scientist and set up a mat in his basement, where he practiced alone. Every few weeks, he would get together with other winkers in the area to play, but the game became a largely solitary activity.

For Drix, too, the game became more reminiscent of the days when he played alone in his family’s apartment as a child. Some of the meaning was lost.

“It went from being a game we played in teams to one we played alone,’’ he said. “In that way the nature of the game changed, too.’’ 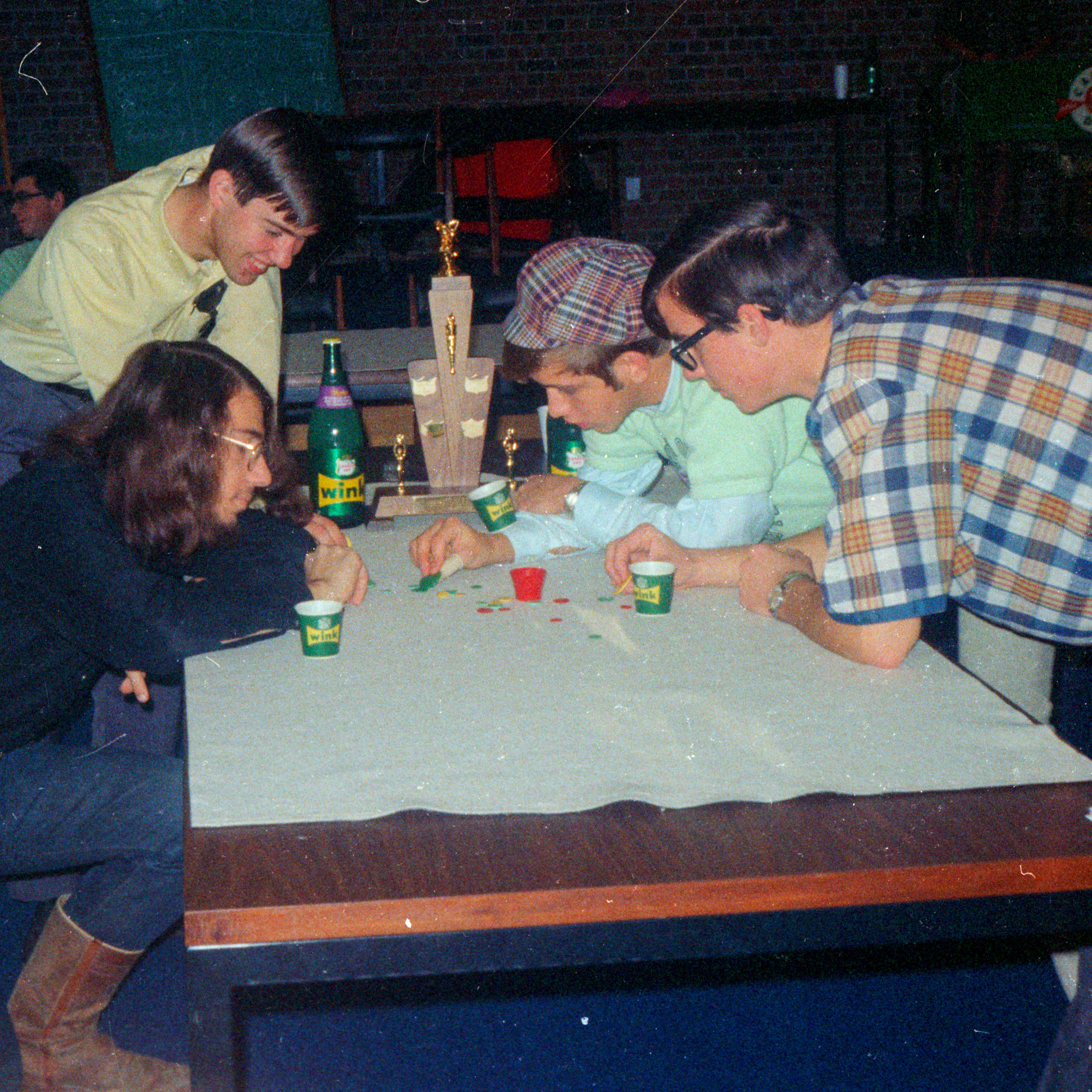 They kept the game alive in whatever way they could, though. Wulkan, who stayed in Massachusetts, started a team called the “Somervillains,’’ based in Somerville, who traveled to compete against other local winkers. Kahn, meanwhile, still travels to England once a year to compete against the winkers across the pond, where he’s proven himself to be the indomitable North American champion since 2002.

The world of winks is now so small that most winkers, both in the U.S. and abroad, know each other by nickname. (Kahn is nicknamed ‘The King’). They know each other’s moves. They know who stopped playing because they got caught up in their jobs or families or life in general.

Drix has been trying to create yet another renaissance by introducing the game to students at Ithaca High School in Ithaca, N.Y., where he’s been a math teacher for many years. He’s had students go on to Ivy League colleges vowing to start clubs, only to have them fizzle out after a few months. 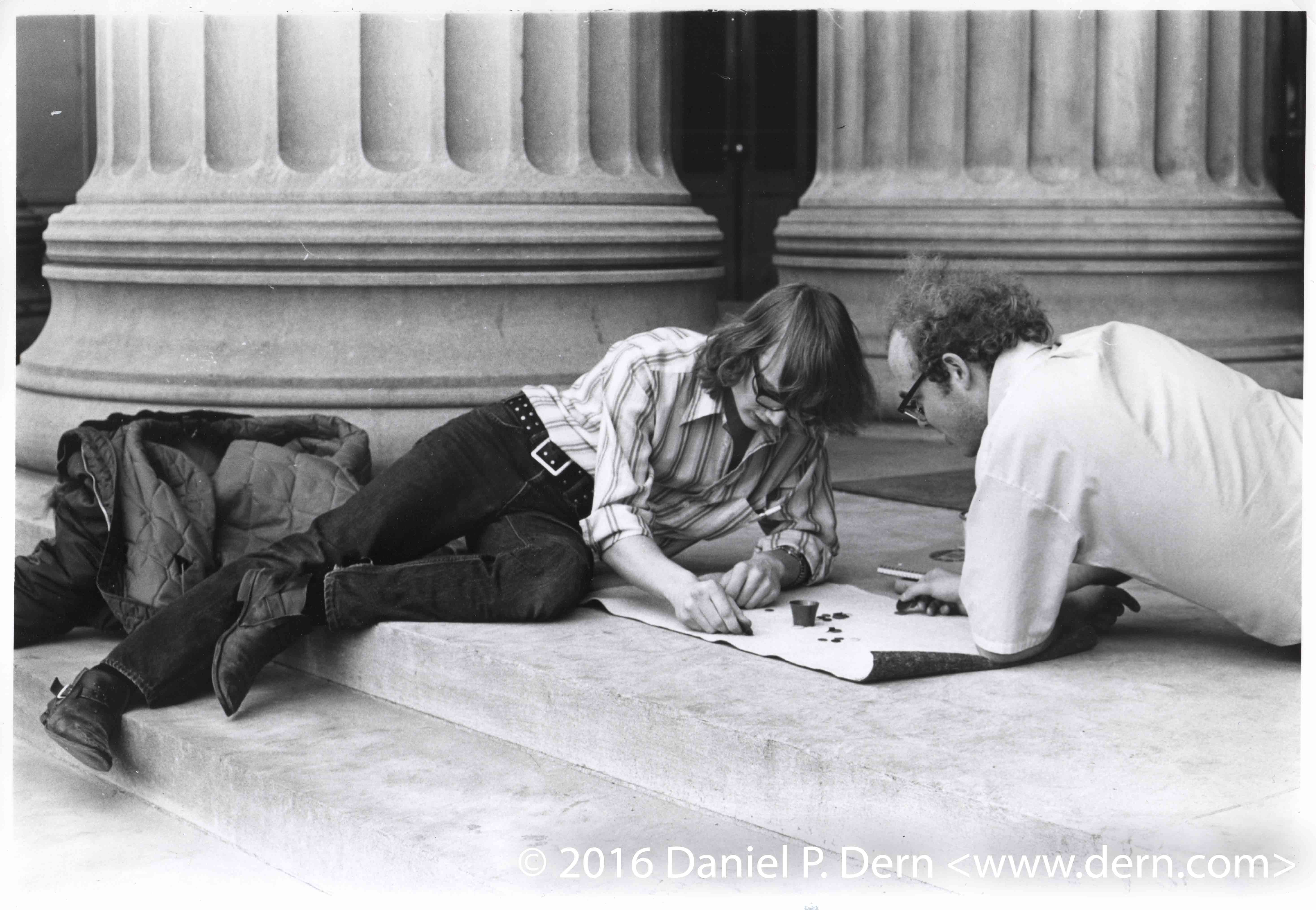 “The fact that they don’t keep playing past graduating high school is a problem,’’ he said. “When we were students in the 60s and 70s, people made more time for other things, but now there’s more pressure for schoolwork. People get too busy, and don’t want to go play when they have a test to study for.’’

Although the official anniversary of the association is February 27, the “golden jubilee’’ celebration will be held in August in Montague, Mass., where some visiting British winkers will play the Americans in an international match. The following weekend, the North American Society will meet in D.C., where they will host pairs and singles matches to determine the reigning continental champion, just like in the old days.

Even though there are fewer of them now, the remaining winkers still speak of squidgers and squidge-offs, of nurdling and gromping. Drix and Wulkan still play the occasional game when they see one another.

“We don’t see each other as often as we’d like, but we do meet at tournaments and play then,’’ Drix said. “ We will certainly get in some games together at this summer’s events celebrating the 50th anniversary. A couple of years ago we teamed up to challenge for the World Pairs title and got trounced. But it was fun.’’ Rick Tucker, center, contemplating his next shot in a game against Larry Kahn, right, in the 1988 NATwA Singles championship won by Larry.

No matter what, they’ll always carry one of the best lessons the game taught them. Tiddlywinks, they say, is one of the few games where mind and hand play an equal part. The players decide on their shots, then put the winks where they want them. But before they make a move, they ask themselves: “Can I make this shot?’’

Playing winks taught them that, yes, they could.

It’s a lesson the winkers don’t want the world to lose.[fragment number=2]

In Jae Crowder, the Suns have an enforcer with some flair