Curtatone’s filing has blocked the Department of Environmental Protection from granting Wynn a key license to continue construction at the site. Wynn officials at the Tuesday press conference said that includes key environmental remediation, including the dredging the Mystic River near the casino site, restoring the natural shoreline, completing a harborwalk, and building new docks.

“Today, the story is about the environmental stewardship of the property, which we take very, very seriously,’’ Wynn Everett President Bob DeSalvio said.

DeSalvio, along with environmentalists from the Boston Harbor Association, Mystic River Watershed Association (MRWA), and the Environmental League of Massachusetts, argued that Curtatone’s appeal on the grounds of poor environmental impact is largely unfounded, noting that construction work thus far has aimed to improve the river and surrounding waterfront by removing contaminated soil and combating other toxins that have leeched into the river.

“Our plan calls for us to go well above and beyond typical remediation [that would be required to update a shopping center],’’ DeSalvio said. “We’re not saddling the taxpayers with any of this work. It’s something we all want to do.’’

EkOngKar Singh Khalsa, executive director of the MRWA, said his organization became involved in the proposal process in 2013, and believes it has environmental merit.

“We recognized that this project…could transform the Mystic River here and perhaps throughout the area,’’ he said.

Curtatone has questioned the project’s sustainability efforts, arguing that increased traffic could add to air pollution and have a negative impact on his city, and has appealed on factors such as the lengthy 85-year license and the towering height of the building. The appeal could delay the licensing by up to a year, according to the DEP.

Environmental League of Massachusetts president George Bachrach said Curtatone’s appeal is based on the politics surrounding gambling and state laws, not a concern for the environment. If the proposal was for a hotel or other type of venue, Bachrach said he doesn’t think there would be such opposition.

Bachrach praised the project not only for its perceived positive environmental impact, but also as an initiative that would facilitate economic growth.

“Joe Curtatone is a good man,’’ Bachrach said. “He cares deeply about his city. [But] the environment is not the issue to be challenging this site on. I would urge Mayor Curtatone even in the best interest of his city to withdrawal the appeal.’’

Finally, Everett Mayor Carlo DeMaria stood before the crowd, calling the concerned residents of his city to stand beside him as he took a hard stance against Curtatone’s appeal, focusing on the estimated 4,000 jobs Wynn says will come to the city as part of the project.

“This one person is stopping this from happening,’’ DeMaria said. “That’s what wrong with government.’’

Wynn is set to begin the appeal process through the Department of Environmental Protection this week, with the first hearing scheduled to take place Thursday, DeSalvio said.

“If we could, you would see this work going on behind my shoulder right now,’’ he said, pointing to the Mystic River behind him. “The goal today was to make sure everyone understood that we can not move forward with the remediation plan. We wanted to make sure that people understood the reason why.’’ 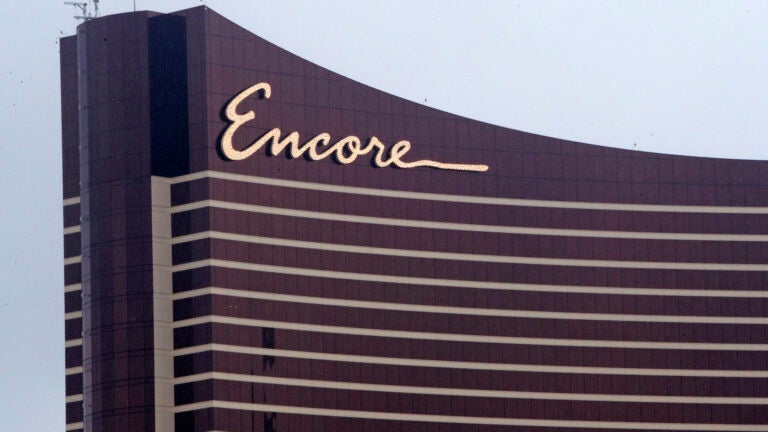