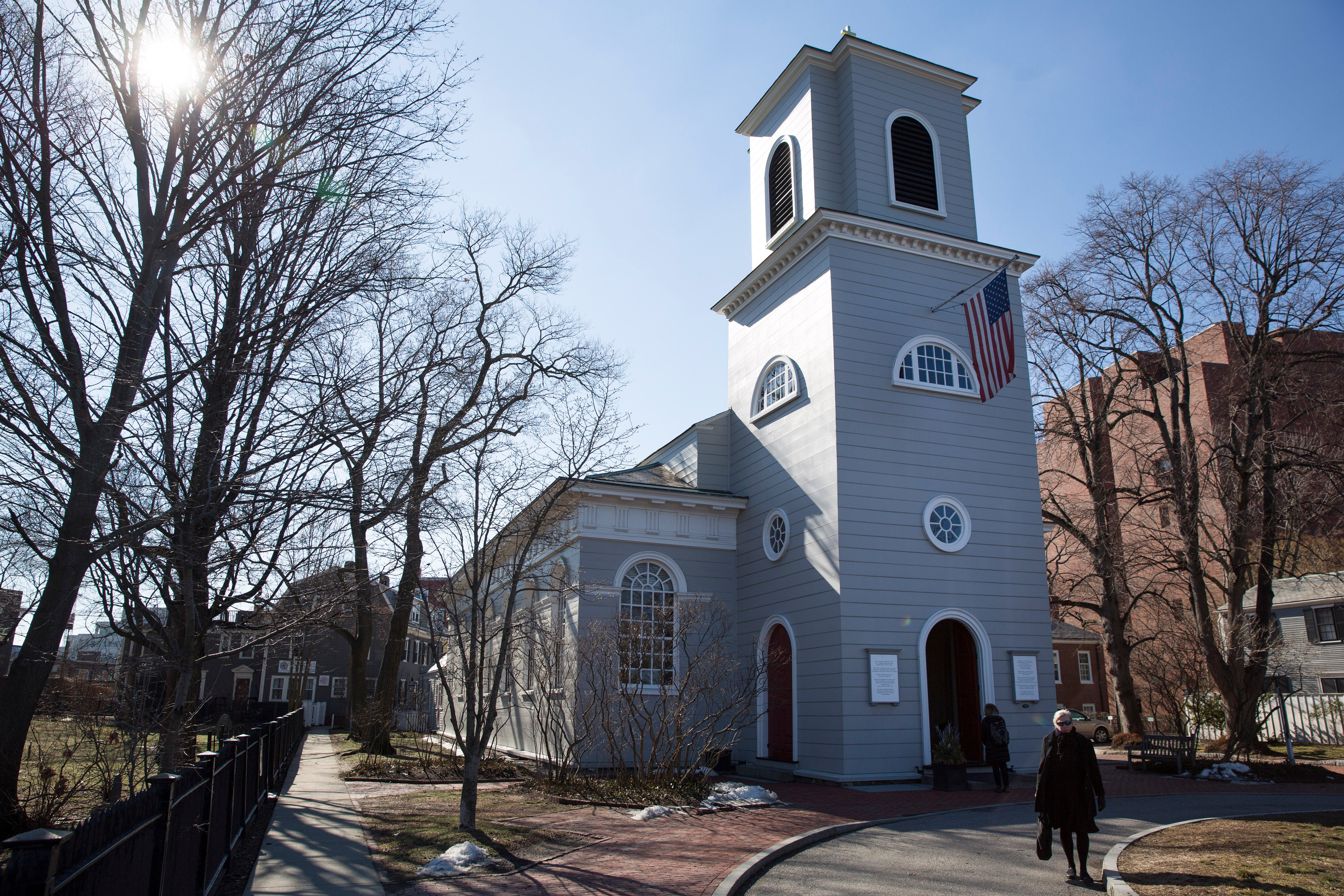 Christ Church Cambridge in Cambridge, Mass., closed its bathrooms to public access in 2012 after several people overdosed there.

CAMBRIDGE, Mass. — In Philadelphia last spring, a man riding a city bus at rush hour injected heroin into his hand, in full view of other passengers, including one who captured the scene on video.

In Cincinnati, a woman died in January after she and her husband overdosed in their baby’s room at Cincinnati Children’s Hospital Medical Center. The husband was found unconscious with a gun in his pocket, a syringe in his arm and needles strewn around the sink.

Here in Cambridge a few years ago, after several people overdosed in the bathrooms of a historic church, church officials reluctantly closed the bathrooms to the public.

“We weren’t medically equipped or educated to handle overdoses, and we were desperately afraid we were going to have something happen that was way out of our reach,’’ said the Rev. Joseph O. Robinson, rector of the church, Christ Church Cambridge.

With heroin cheap and widely available on city streets throughout the country, users are making their buys and shooting up as soon as they can, often in public places.

Police officers are routinely finding drug users — unconscious or dead — in cars, in the bathrooms of fast-food restaurants, on mass transit and in parks, hospitals and libraries.

The visibility of drug users may be partly attributed to the nature of the epidemic, which has grown largely out of dependence on legal opioid painkillers and has spread to white, urban, suburban and rural areas.

Nationally, 125 people a day die from overdosing on heroin and painkillers, and many more are revived, brought back from the brink of death — often in full public view. The police in Upper Darby, Pennsylvania, have even posted a video of another man shooting heroin on a public bus, and then being revived by Narcan, which reverses the effects of a heroin overdose, to demonstrate the drug’s effectiveness.

Some addicts even seek out towns where emergency medical workers carry Narcan and then shoot up in public places — “knowing if they do overdose, there’s a good likelihood that when police respond, they’ll be able to administer Narcan,’’ said Special Agent Timothy Desmond, a spokesman for the New England region of the Drug Enforcement Administration.

In Cincinnati in 2014, an Indiana couple overdosed on heroin at a McDonald’s, collapsing in front of their children in the restaurant’s play area.

In Niagara Falls, New York, a man was accused in October of leaving a 5-year-old boy unattended in a Dairy Queen while he went to the bathroom; he was later found on the floor with a syringe in his arm.

In Johnstown, Pennsylvania, a man overdosed on heroin on Feb. 19 in a bathroom at the Cambria County Library.

“Users need the fix as quickly as they can get it,’’ said Edward James Walsh, chief of police in Taunton, Massachusetts, a city 40 miles south of here that has been plagued with heroin overdoses in recent years. “The physical and psychological need is so great for an addict that they will use it at the earliest opportunity.’’

That reality has taxed law enforcement and city services across the country, and has stretched the tolerance of businesses that allow unfettered access to their bathrooms. Legal liability is an increasing worry.

“Overdosing has become an issue of great societal concern,’’ said Martin W. Healy, chief legal counsel for the Massachusetts Bar Association. “I’m not aware of any seminal cases so far, but this is likely to be a developing area of the law.’’

After shooting up in public places, people often leave behind dirty needles, posing a health hazard. In response, some groups have called for supervised injection facilities, like those in Canada and Europe, where people can inject themselves under medical supervision. The goal is to keep them from overdosing and to curb infectious diseases. Such facilities are illegal in this country, although the mayor of Ithaca, New York, recently suggested opening one.

In Boston, where pedestrians step over drug users who are nodding off on a stretch of Massachusetts Avenue known as Methadone Mile, a homeless organization has planned what it calls a safe space, where users could ride out their high under supervision; it would not allow actual injection on site.

New England has been a cradle of the heroin epidemic. Middlesex County, which encompasses Cambridge, a sprawling city of 107,000 just west of Boston, has the highest number of overdose deaths from heroin and prescription pain pills in Massachusetts. From 2000 to 2014, Middlesex, which also includes the city of Lowell, a major heroin hotbed, had 1,634 opioid deaths.

No one keeps track of how many deaths occur in public spaces, but law enforcement officials agree the number is high. The City of Cambridge spent $400,000 to buy and install Harvard Square’s first free-standing public toilet, which opened this month.

“We quite frequently see folks using public areas,’’ said Robert C. Haas, the Cambridge police commissioner. It was the fear of someone dying in their bathrooms that led officials at Christ Church Cambridge to close public access to them in 2012. By doing so, the church did not experience the kind of tragic scenes that are occurring around the country, but the decision was difficult.

The church, which opened in 1761 and has a long history of social activism, had kept the bathrooms open to accommodate the homeless people around Harvard Square. But addicts were also using them. Closing them after decades of serving the public represented “a retreat from our ministry,’’ Robinson said. But in consultation with the Cambridge police, the church reluctantly concluded that leaving the bathrooms open only enabled the drug users.

Because there were no free-standing public toilets in Harvard Square, a popular shopping, culture and dining destination that is visited by 8 million tourists a year, the absence of the church bathrooms was felt right away.

“Almost immediately, we began receiving calls saying, basically, ‘What the hell just happened?’’’ said Denise Jillson, executive director of the Harvard Square Business Association. “They were saying, ‘Our doorways and alleyways have become public urinals, and people are defecating everywhere.’’’

After a campaign by business owners and local activists for a public toilet — which included stickers that read “I Love Toilets’’ and “Where Would Jesus Go?’’ — Cambridge spent $400,000 to buy and install Harvard Square’s first free-standing public toilet. It was unveiled on Feb. 12. Free to use and open 24 hours a day, it sits in a kiosk on a busy traffic island between the stately brick buildings of Harvard Yard and the weathered headstones in the Old Burying Ground, which dates to 1635.

The kiosk, called the Portland Loo and made in Oregon, was designed specifically to discourage drug use. It has slanted slats at the bottom that allow the police — or anyone — to peer in and see if someone has passed out on the concrete floor. It has no heat, air conditioning or noise insulation, all meant to foil anyone from getting too comfortable inside. The hand-washing faucet is outside, and an attendant cleans four times a day.

The outcome pleased Robinson, who said the anguishing decision to close the church bathrooms had “led to a broader response to the needs of the homeless in our neighborhood.’’

While the new toilet may improve life for some in Harvard Square, many restaurants, parking lots and other public spaces here and elsewhere remain potential sites for drug activity.

“Until we get a handle on the drug problem,’’ said Capt. Timothy Crowley of the Lowell Police Department, “I think this is an issue we’ll be dealing with for a long time.’’

Boston.com readers submitted questions for the mayoral candidates about Mass. and Cass. We got their answers.