When sailors dropped anchor in Boston during World War II, officers told them they had earned their liberty time. But they were cautioned to avoid Scollay Square and its burlesque shows.

“So of course, what’s the first place that all those young testosterone-filled young men would go, except Scollay Square?’’ said David Kruh, who has written two books about the since-bulldozed square and runs a website dedicated to preserving its memory.

Best remembered as a rowdy entertainment and commerce hub near downtown Boston, Scollay Square was bulldozed in the 1960s and replaced by the city’s Government Center district.

When the newly renovated Government Center T station opens its glass doors Monday after a two-year hiatus, riders may notice some new homages to the historic neighborhood.

The station’s interior will feature several century-old mosaics reading “Scollay’’ and “Scollay Under.’’ While one sign had already been visible in the station’s previous form, others had been hidden, making for some surprising findsfor workers during the renovation. They have all been restored for better display, and hearken back to a time when the transit station shared a name with the neighborhood. 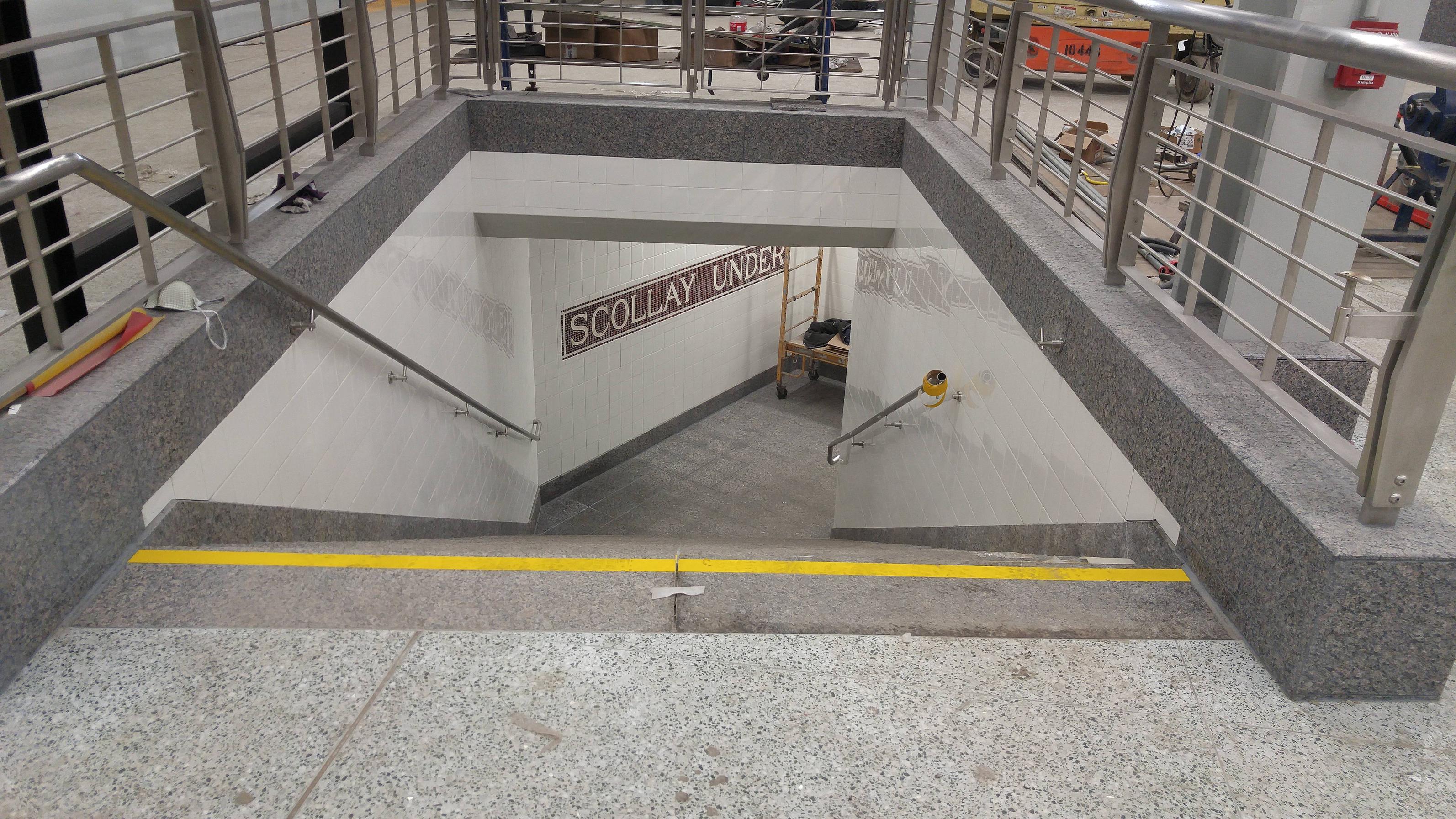 The signs will complement vestiges of the old square that can still be found in the neighborhood and around Greater Boston.

The large ornamental tea kettle that decorated a tea shop in the square now sits above a Starbucks. The Sears Crescent building, which housed dozens of businesses over the years, underwent heavy interior renovations but still lines City Hall Plaza. Other pieces of history traveled farther: Signage for the Old Howard theater, which was the epicenter of the Boston burlesque scene, wound up on display in the dance studio at a Concord community arts center called the Umbrella. Kruh’s website features other where-are-they-now Scollay Square tidbits.

The Scollay T station was one of Boston’s earliest. Opening in 1898, one year after the system’s—and the nation’s—very first subway stations began moving passengers, it extended what would become the Green Line. Then, in 1916, a second platform opened below the existing station to serve passengers of what would become the Blue Line. That platform was referred to as Scollay Under.

Scollay and Scollay Under were also renamed Government Center, and the station underwent what had until now been its most recent major renovation, complete with what Kruh described as its brick “bunker’’ entrance. 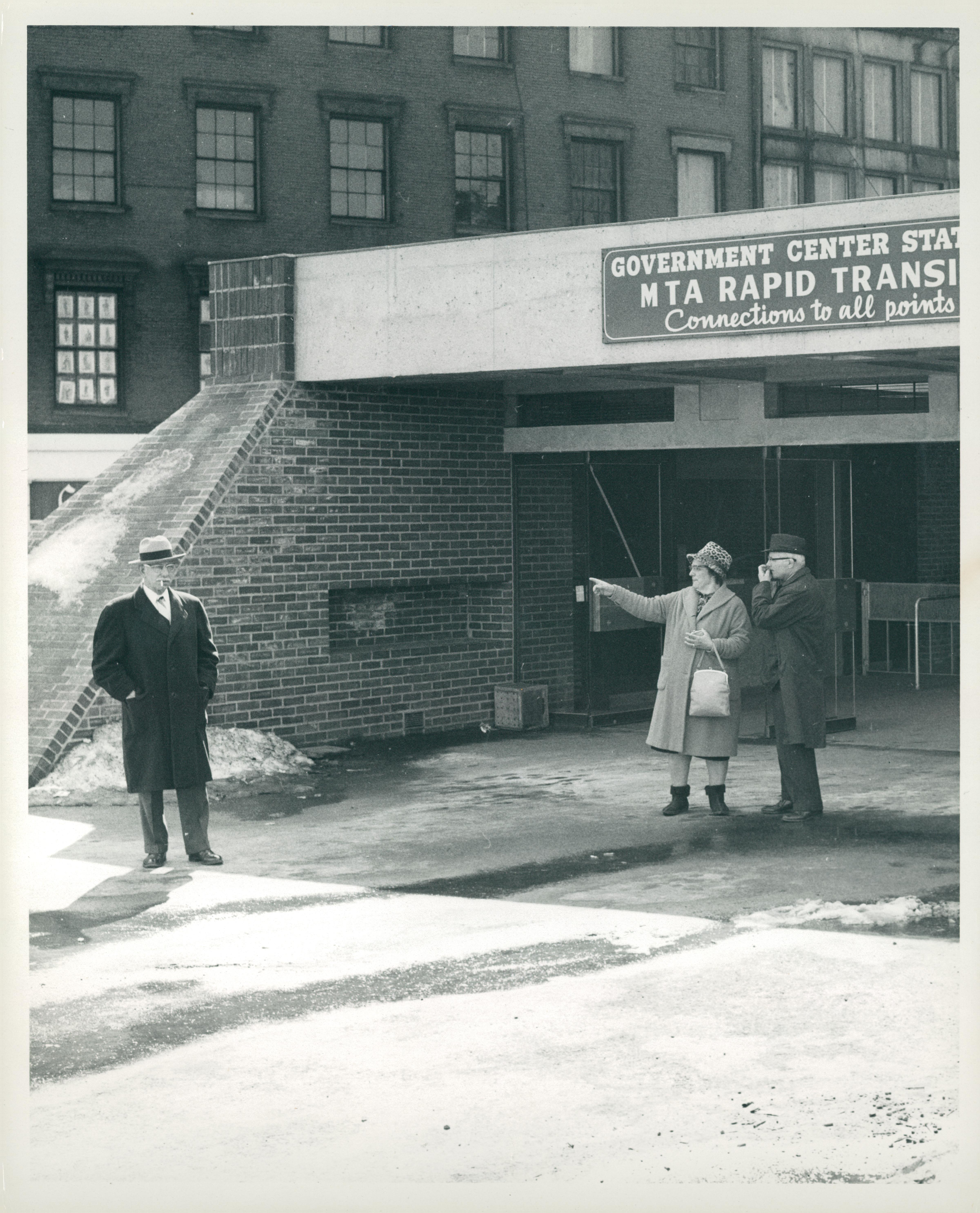 It makes an appearance in “M.T.A.,’’ the song about a man named Charlie who can’t get off the train. Originally written as part of a 1949 mayoral candidate’s campaign against subway exit fares, the song was popularized across the country by the Kingston Trio in 1959.

Charlie’s wife goes down to the Scollay Square station

Every day at quarter past two

And through the open window she hands Charlie a sandwich

As the train comes rumbling through

(It’s unclear why his wife didn’t just hand him the change for the exit fare rather than a sandwich.)

In the 1980s, a campaign led by WRKO broadcaster Jerry Williams brought latent recognition of the area’s history.

According to Kruh, Williams signed off from a report at the 1986 Boston Celtics championship celebration at City Hall Plaza by describing his location as Scollay Square and calling for the name to be brought back. At Williams’s urging, the city of Boston held a ceremony in 1987 to formally recognize the neighborhood as “Government Center at Scollay Square.’’

The T also got in on the action, adding “at Scollay Square’’ to the station’s exterior signage until its 2014 closure.

Kruh said he’s looking forward to an even greater star turn for old Scollay Square with the new glass-encased Government Center station, aided by the display of the century-old signage within.

The reconstruction of Government Center Station, in photos: