U.S. Rep Michael Capuano has long been a champion of the troubled Green Line extension to Somerville, where he once served as mayor, and Medford. Speaking at a ribbon cutting event for the newly renovated Government Center station Monday, he took the opportunity to urge similar ceremonies in a few years, further down the Green Line.

“For me, this is just one more step on making the Green Line exactly what it should be, which is a full-service Green Line to as many people as possible,” he said. “Including those who want to come to Government Center via Somerville, Cambridge, and Medford. If you can get this many people in a room for one stop, imagine how many people you can get for seven new accessible stops.”

The Green Line extension fell into a holding pattern last year after the T revealed a fast-ballooning budget. Since, the agency has fired project contractors and begun a wide-scale redesign in an effort to quell costs. Transportation officials have said they could cancel the project if they can’t get the price tag back down.

A first look at potential design changes at a meeting in Somerville in early March suggested that if the project moves forward, it will likely be outfitted with bare-bone stations.

A decision on the project’s future is expected this spring.

Government Center’s renovation satisfied one of the many promises the state made to the Conservation Law Foundation to mitigate against the effects of the Big Dig, by modernizing and extending the Blue Line platform. Among the remaining commitments: the Green Line extension.

Conservation Law Foundation president, Bradley Campbell, and Rafael Mares, a vice president who leads its transit advocacy, attended the Government Center event Monday, both to celebrate the completion of the Blue Line renovations and, like Capuano, in support of the extension.

“What’s outstanding now is the Green Line extension and the Blue Hill Ave. stop on the Fairmount (commuter rail) Line,” Mares said in an interview. “We’re looking forward to the remaining ones.”

Gov. Charlie Baker last week told the WGBH program Boston Public Radio that the Green Line extension should be built if it can get back to a reasonable budget. But Baker signaled frustration with the project’s estimated cost getting as expensive as it did last year, when it blew past previous projections of $2 billion.

“Based on the most aggressive estimates about ridership, it’s maybe 20-to-25,000 people,” he said. (However, a November presentation from the T put the figure at 49,000.) “Remember, a million people ride the core system. … But if we can come up with a proposal and a plan on this that will work within the contours of the money that everyone said we’d have available to spend on this, then we should do it. But this idea, somehow, that it’s OK to just spend wildly on things when it’s very clear that the way we’re spending money doesn’t make a lot of sense, I think that is so unfair to the taxpayers and to the rest of the folks here in the Commonwealth.”

The federal government is slated to kick in $1 billion for the Green Line extension, a figure Capuano has been credited with helping to secure.

Asked after the Government Center event about Capuano’s call for the Green Line extension’s completion, Transportation Secretary Stephanie Pollack said she was unsurprised.

“Congressman Capuano and I talk about the Green Line extension all the time, and I wasn’t in the least bit surprised that he used the opportunity to remind us of it,” she said. 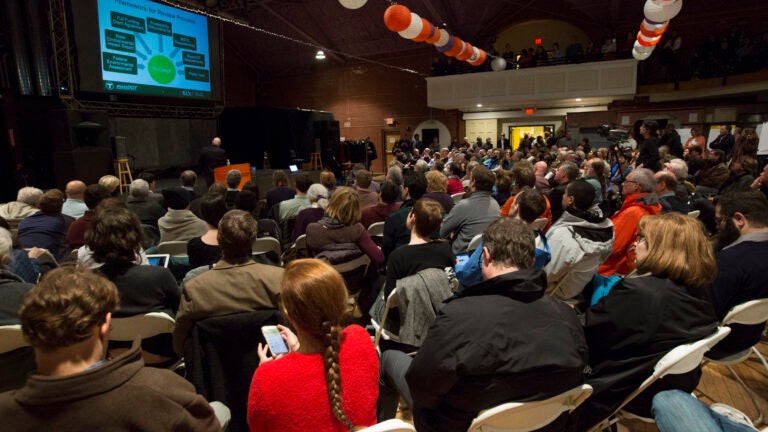