More than two dozen alleged members of a South End gang were indicted on an array of drug and firearm charges for allegedly terrorizing neighbors with violence, fear, and intimidation, the U.S. Attorney’s Office said in an indictment released on Thursday.

The indictment focuses on alleged members of the Lenox Street Cardinals, a gang that operates around the Lenox Street Housing Development in the South End, the U.S. Attorney’s Office said. The gang has about 100 active members, according to the Boston Regional Intelligence Center.

A total of 27 people were charged for drug and firearm arrests in the case, including 19 on federal counts and eight on state charges.

“Through their sale of weapons and drugs, these defendants bring violence, fear and intimidation to a community in the heart of this City,” said U.S. Attorney Carmen M. Ortiz. “Lenox Street’s residents, surrounded by illegal activity and the violence that accompanies it, are made to feel like prisoners in their own homes.”

The sweeping indictment is the second major attempted takedown of gang activity in recent weeks. In late January, law enforcement officials conducted widespread raids and arrests of members of the MS-13 gang on gun, drug, murder, and racketeering charges. Officials said MS-13 was responsible for the murder of five people in the last two years.

Thursday’s charges were the result of a joint local, state, and federal operation that began in January 2015. The Lenox Street Housing Development was the site of 30 shootings and over 75 reports of shots fired between March of 2012 and June of 2015, according to the indictment.

The indictment specifically points to a music video posted to YouTube in July 2014 that showed alleged gang members smoking marijuana in the neighborhood, which helped spark the investigation.

Much of the evidence in the indictment relied on a cooperating witness who allegedly made street-level purchases of crack cocaine that officials recorded on audio or video.

The indictment includes maps based on data from the Boston Regional Intelligence Center that show the concentration of shootings, robberies, shots fired, firearm arrests, and drug arrests near the housing development. 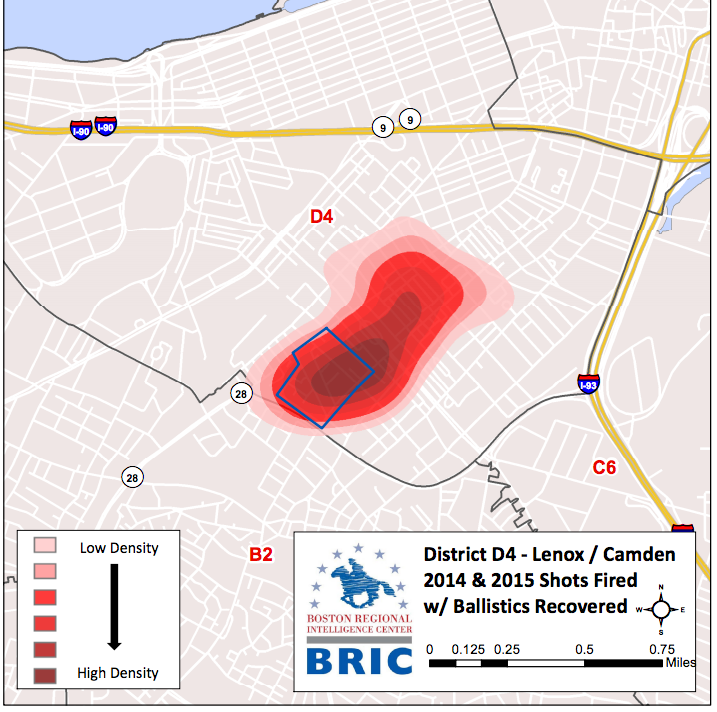 The prevalence of shots fired with ballistics recovered is concentrated near the Lenox Street Housing Development, according to data from BRIC.