When a 13-year-old was robbed of his birthday money, his dream of buying new sneakers was dashed. That is, until Boston police and a local business stepped in.

Amir Taste was heading to school one morning in March when a robber stole the $100 in birthday money he was carrying, according to the Boston Police Department. When police arrived at the school to take a report of the robbery, they learned that Amir was hoping to buy new sneakers with the money.

After that, Boston police officers Skye Robinson and Sean Rooney felt compelled to do more than write a report.

The officers called Justin Kirkland-Smith at Concepts shoe store in Cambridge to talk about securing a pair of sneakers for Amir.

“Once the officers told us why they were buying the sneakers, there was no way we were gonna take their money,” Kirkland-Smith said.

The Concepts employees offered to give Amir a new pair of sneakers, as well as a T-shirt, after hearing his story, said police. Police then surprised Amir with the birthday gifts.

“I can’t believe you guys did this,” said an astonished Amir to the officers.

Amir wrote a thank you letter to the workers at Concepts, saying, in part: “I’m glad there are people in this world besides my teachers and parents who actually look out for me.”

He said the gift meant he didn’t have to ask his mom for the money or save up for them.

Here is part of his letter to the Concepts employees: 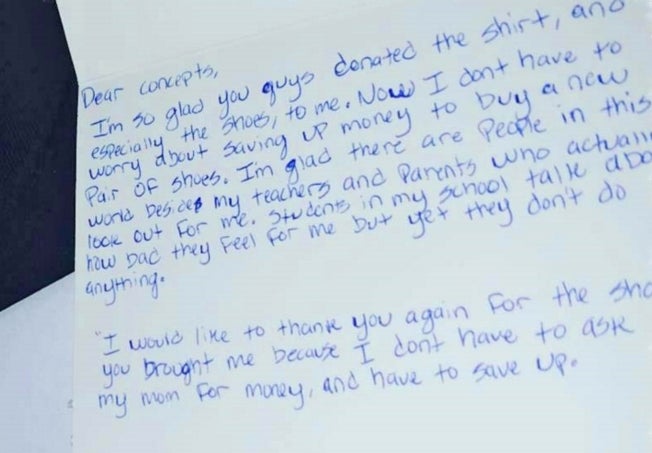 Amir Taste, 13, wrote this letter to Concepts to thank them for the sneakers.

“It was the right thing to do,” Robinson said about helping Amir. “In fact, as soon as Amir told us his story, we knew what had to be done. But it was a team effort all around and we certainly have to thank Concepts for helping us turn one kid’s bad day into a birthday he’ll … hopefully … never forget.”