TOWNSHIP 37, Maine (AP) — Six years ago, there was more than logging going on in the wilderness in eastern Maine. Hidden from view and protected by gates, a sophisticated marijuana-growing operation featured a warehouse, bunkhouses, migrant workers — and $9 million worth of marijuana.

It was camouflaged so well that a game warden rode right past it the day before law enforcement officials finally spotted it using aircraft on Sept. 22, 2009.

Three men convicted in the enterprise that produced one of the biggest marijuana seizures in Maine history were sentenced Thursday in U.S. District Court in Bangor.

A judge imposed sentences of more than 14 years for Malcolm French, 54, of Enfield, and more than 12 years for Rodney Russell, 52, of South Thomaston, for charges including manufacturing drugs and harboring workers who were in the country illegally. A third man, Kendall Chase, 59, of Bradford, was sentenced to five years in prison for conspiracy.

‘‘This was a truly remarkable operation,’’ said Assistant U.S. Attorney Joel Casey, who described it as the largest marijuana-growing operation to be successfully prosecuted in Maine. The three men were convicted by a federal jury in January 2014.

The marijuana operation was concealed in the woods and bogs in rural Washington County at the nation’s eastern tip. Drug agents found nearly 3,000 plants, some as tall as 8 feet, along with 40 pounds of processed marijuana, all valued at $9 million.

Special Agent Jonathan Richards of the Maine Drug Enforcement Agency said he’d seen nothing like it in his 37-year career in law enforcement.

There were two bunkhouses for workers and a building equipped with a kitchen and a shower with hot water, all powered by propane, Richards said. A swampy area provided a clearing for sunshine and an abundant supply of water for the plants, which grew in peat moss plots surrounded by wire, he said. There were seven connected buildings with propane heaters for storing and drying the plants, he said.

The site couldn’t be reached by rough logging roads cut through the woods of Township 37, and locked gates required a 2-mile trek to reach the secluded operation.

‘‘When they put this together, there was clearly a great deal of planning that went into it. They didn’t all of a sudden start growing marijuana. They thought it out, planned the structures and used natural cover to keep it hidden,’’ Richards said.

In February, the judge accepted a forfeiture agreement in which Haynes Timber, which was owned by French and his wife, was fined $100,000. French’s wife paid $1.5 million under the agreement in which she retained 22,000 acres comprising Township 37.

Thomas Hallett, lawyer for French, said the sentence was far less than what was originally sought by prosecutors but said it was still substantial, especially given society’s changing attitudes about marijuana.

‘‘Everybody is cognizant that marijuana has moved a significant step toward legalization in the last five years,’’ he said afterward.

Casey said societal attitudes may be changing but the law hasn’t. ‘‘People need to understand this is not the court of public opinion. This is a court of law. If people want to change the law, then there are ways in the representative form of government to do that,’’ he said.

Richards, for his part, said he was happy to put the matter to a rest. ‘‘This has been my life for six years,’’ he said. ‘‘It’s good to have it closed. It’s good for everybody.’’ 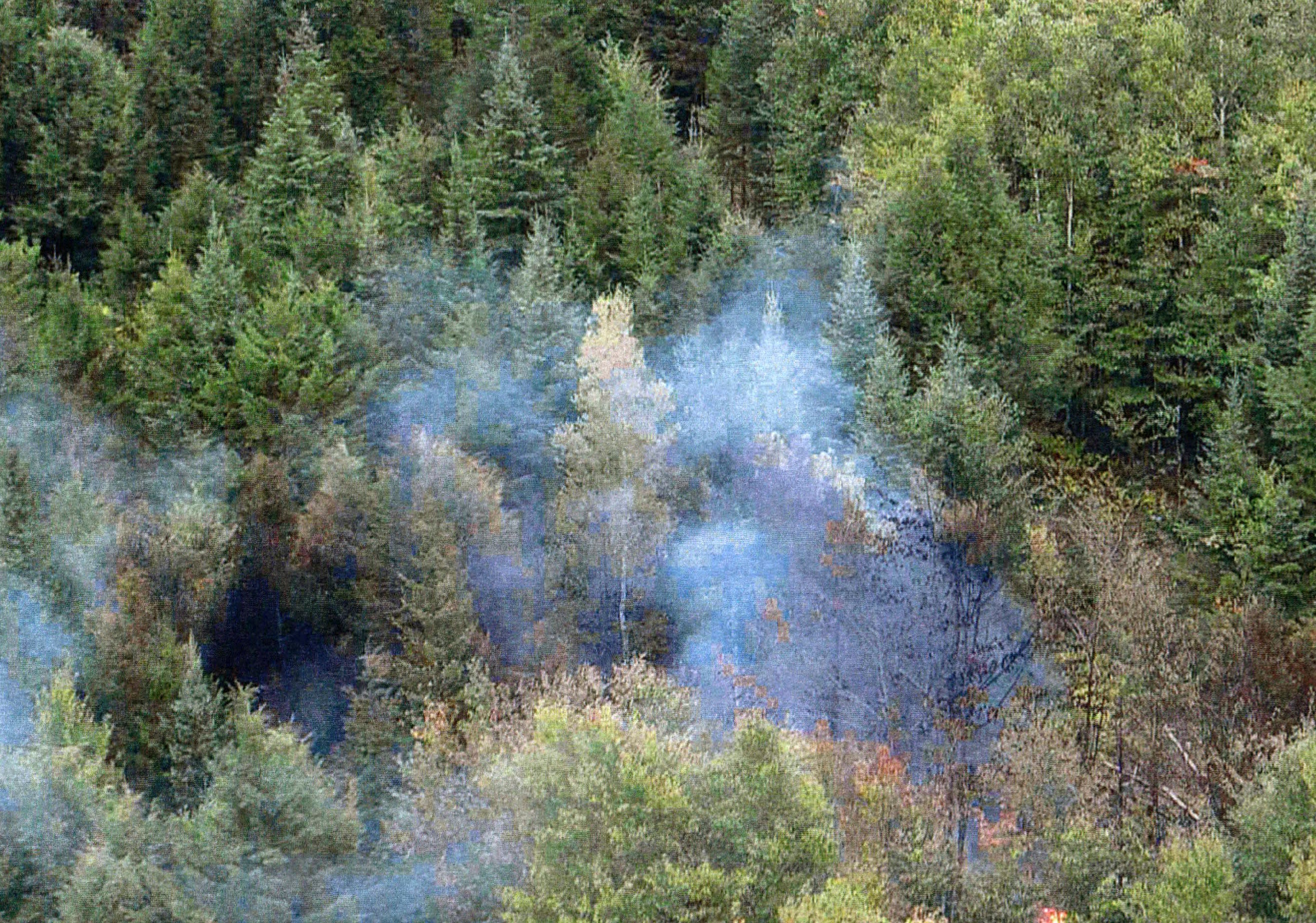 The fire set by fleeing workers.