BOSTON (AP) — A Massachusetts 6-year-old’s love of sea turtles prompted him to forgo birthday gifts this year and ask instead for money he could donate to sea turtle rescue efforts.

Jasper Rose, of Watertown, collected $550 for Boston’s New England Aquarium from his birthday earlier this month. He and his family presented the check to aquarium officials Friday to mark Earth Day and asked that it be used for its sea turtle rescue program.

“It means an enormous amount to us. It really encourages us,” Nigella Hillgarth, the aquarium’s president and CEO, told Jasper and his family. “We’re really moved by this gift. The generosity that he’s inspired is really something. “

For his efforts, Jasper got to spend the morning at the top of the aquarium’s four story Caribbean coral reef tank feeding the sea turtles by hand. “It’s been a lot of fun,” he said, tossing cabbage and other leafy greens to a 90-year-old, 550-pound turtle named Myrtle.

Rose’s mother, Ananda, said the family visits the downtown aquarium often, and Jasper can pick out and name all the turtles. She says he’s even set up a website about sea turtles and wrote a 10-page book about them with his father’s help.

“For some reason, he really fell in love with sea turtles and found out everything about them and why they’re endangered and why they need help because we’re doing all the damage,” Ananda Rose said.

Jasper, she says, got the idea for the donation after recently visiting the aquarium’s Animal Care Center in Quincy, Massachusetts.

There, aquarium officials treat dozens of sea turtles each year that are found stranded on the beaches of nearby Cape Cod.

Typically suffering from hypothermia, dehydration and other injuries and illnesses, the turtles are nursed back to health before being released back into the ocean. 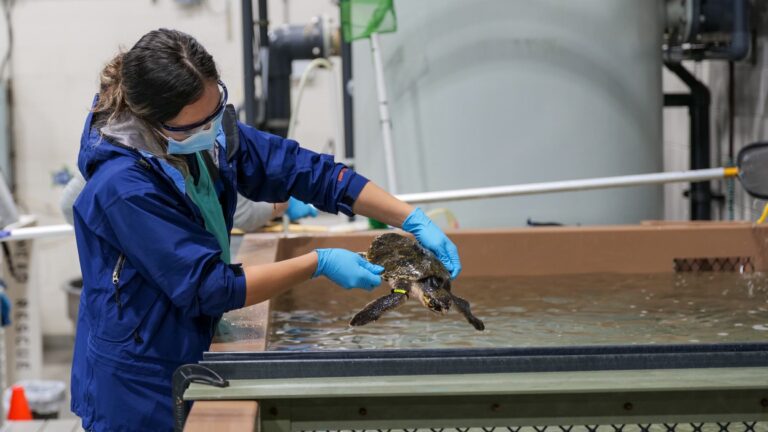