If the Green Line extension out to Medford moves forward, it will cost $2.3 billion, including $73 million in unfunded costs. And the price tag could increase, depending on a federal review of the project and delays in construction.

The new cost will be part of a crucial project update set to be presented to the two boards that separately oversee the state’s Department of Transportation and the MBTA. The boards could take action Monday to help determine the fate of the project, which saw its status thrown into question after budget overruns exploded into public view last year.

An interim project management team was brought on by the T this winter to correct course after the budget spiked to as high as $3 billion last year. That group found about $620 million in savings in design cutbacks and project adjustments.

But the costs are still $300 million higher than the rail extension’s budget was thought to be a year ago. The prior $2 billion budget would be half-funded by the federal government, with the state covering the rest.

The $300 million difference would be made up in part by rare municipal contributions from the cities of Somerville and Cambridge, totaling $75 million. Another $152 million would be provided from the Boston Region Metropolitan Planning Organization, using money that had been earmarked for a potential later phase of the project, which would have further extended the Green Line into Medford.

That leaves a $73 million funding gap and no current plan for how to fill it, Transportation Secretary Stephanie Pollack told reporters in a briefing Monday morning.

And, Pollack said, that figure could still increase significantly. To hold on to the project’s federal funding, it would need to undergo a tight review that could lead to additional requirements — and costs. In 2014, a similar review saw the project’s price tag increase from $1.6 billion to the $2 billion figure that was later proven too modest itself.

The gap could also grow depending on when the project’s procurement process would begin, Pollack said. It could escalate costs by up to $1.6 million per month.

Pollack said the board would face a number of decisions at Monday’s meeting, beginning with whether or not to move forward with the project. If they chose to do so, they would need to consider when to begin the procurement process. She said her preference would be to wait for the feds to complete their review of the project first.

“My personal view on this is I don’t really want to chase additional sources of revenue for a $73 million gap if that’s not the money,” she said.

The state has previously pledged not to spend any further money on the project than it has already put down. If it sticks to that resolution, the gap would need to be filled by outside sources.

Beginning the procurement process immediately could also bite the T, she said, because the state would spend money on that process without knowing whether the federal review would deem the project feasible. And with the previous budget being decimated by poor oversight of contractor bids under the prior procurement method, she said the T should very deliberately hire up and understand the new contracting method before beginning it.

Pollack, who earlier in her career was a fierce advocate for the project, said she has “concerns” about it post-redesign.

“Both boards now have a very clear sense of the path forward if they want to take the path,” she said. “That said, there are substantial risks that remain. There are also…ways of managing those risks. So just because there’s a risk doesn’t mean that you don’t move ahead. The risks that are still out there are the risks that we don’t have enough revenue to pay for the entire project; that we don’t have the management capacity at the T; and for me, what remains the very important risk — the risk of diverting the MBTA from its first priority, which has to be reestablishing reliable service for the current daily ridership.”

Since the 1990s, the extension has been legally required as environmental mitigation for the Big Dig highway project, and a lawsuit last decade forced the T to begin moving forward.

But officials said they would consider taking the project off the table in the face of the recent budget trouble — even though calling it off would result in hundreds of millions of wasted dollars, a forfeiture of $1 billion in federal funding, and the likelihood of legal action from project advocates. Pollack said the possibility of legal action is another risk the boards have to consider.

“There’s no right or wrong answer to how you weigh those risks,” she said. “I just want to make sure that both boards weigh them before they make a decision.”

A redesigned Green Line extension would retain all seven new Green Line station locations, as well as a bicycle and walking path along the transit route. The path and the stations would be altered and simplified, with the stations morphing from elaborate, fully-fleshed out stops to something more akin to the above-ground stations located elsewhere along the Green Line (though in a change from previously presented plans, they would include shelter from the weather). The station redesign would save nearly $290 million.

The path, meanwhile, would have fewer exits to the street before ending near the planned Washington Street station in Somerville. Prior plans had the path extending to Lechmere.

Costs were further knocked down by $115 million by downsizing a planned vehicle maintenance facility.

Whether those cuts and other plans are enough to keep the project alive could be determined this afternoon. The boards meet at 1 p.m. 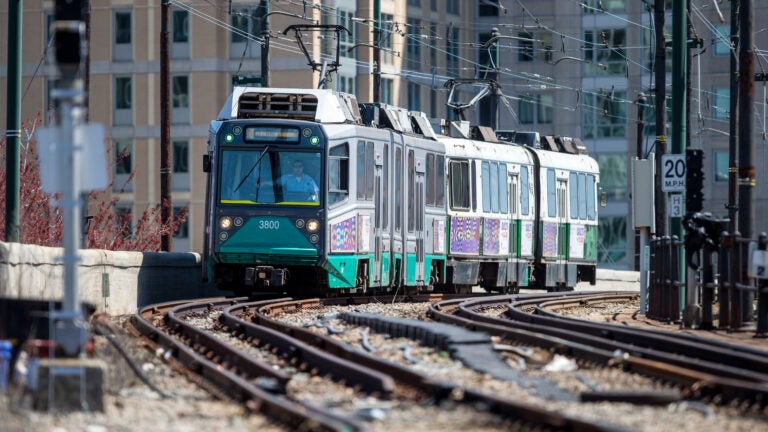