Semi-automatic “assault” weapons are banned in Massachusetts. Yet 10,000 of the guns were sold in the state last year, Attorney General Maura Healey said Wednesday.

Gun manufacturers create supposed “state compliant” guns by making slight changes in the weapons — removing a flash suppressor or telescoping stock — Healey said. That ends now, she announced in a press conference and Boston Globe op-ed. On Tuesday, letters went to the more than 300 gun dealers in the state letting them know they can no longer sell these weapons.

“We put gun manufacturers and gun dealers on notice that we’re cracking down on the sale of illegal assault weapons,” she said.

Weapons like the AR-15 are the gun of choice for mass shooters, Healey said, used in shootings in Orlando, Baton Rouge, Dallas, Sandy Hook and San Bernardino. After the shooting that killed 49 people in a nightclub in Orlando, sales of those types of weapons went up 450 percent in Massachusetts, Healey said.

People who already own the guns can keep them, she said. And gun dealers will be allowed to transfer their remaining stock to states where the guns are legal.

In a press conference announcing the new enforcement, Healey and others also faulted the federal government for not doing more to crack down on these types of weapons. Only seven states have an assault weapons ban like the one in Massachusetts.

Suffolk County District Attorney Dan Conley said Massachusetts’ tough gun laws are “undercut by the lax regulations across so much of the country.” Fewer than a quarter of guns used in crimes come from Massachusetts retail sales, he said. The rest are illegal or come from out of state.

Greg Gibson, whose son Galen was 18 when he was killed by a fellow student armed with an assault rifle at his Western Mass. college, stood next to Healey and a cadre of law enforcement officers and gun-control advocates as she announced the change.

“I wholeheartedly support this initiative and every other initiative that … will save other families from having to endure what my family suffered,” he said. 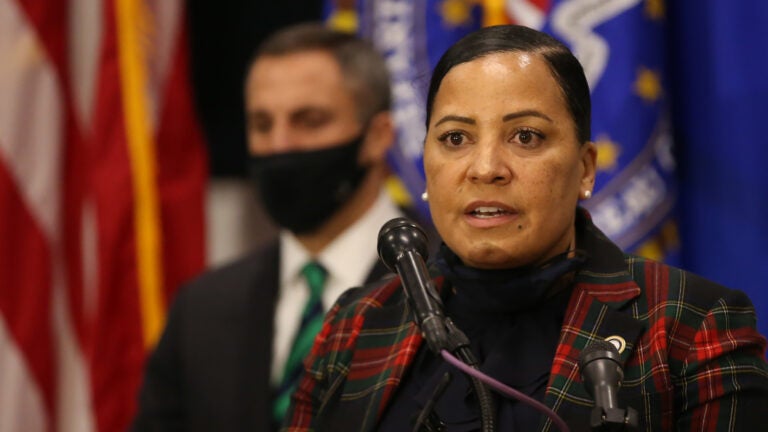