What would Boston be like if Pokemon were real?

Signs envisioning that world, made by a local designer and writer, popped up all around Boston over the weekend.

The signs jokingly alert Bostonians to the creatures, as if they were a normal part of society – Squirtle puts out fires, Exeggcute terrorizes supermarkets and Dodrio is your new favorite drinking partner.

Someone has installed #PokemonGO signs all around Boston… pic.twitter.com/zDLILdivbu

“All firefighters are napping. In case of fire please catch the nearest water Pokemon,” reads the text on one sign, accompanied by the silhouette of a Squirtle.

The signs capitalize on the overwhelming popularity of the augmented reality mobile game Pokemon Go, where anyone with a smartphone can act as a “trainer” and catch Pokemon as they “appear” around them.

The creator of the signs, Trevor O’Brien Jones, works as a copy writer for a large investment firm and made the signs as a fun side project, he said in an interview with Boston.com. He hopes visitors and residents get a laugh out of the light-hearted project.

“It’s meant to be a fun thing for people to interact with,” he said.

The signs are a hit online, where tweets about them garnered hundreds of retweets. One of the more controversial signs takes a hit at Republican presidential candidate Donald Trump.

“WARNING,” it reads. “Wild Hypno have been turning normal people in Trump supporters.”

In the Pokemon world, Hypno holds a pendulum and has been known to lull its enemies into a deep state of hypnosis.

A sign attached to a bike post on Boylston Street warns bars about the rambunctious, three-headed Dodrio Pokemon.

“Please only serve the Dodrio one drink at a time. All heads share one liver,” it states.

Since each head of the Dodrio has a different personality, O’Brien Jones imagined what it would be like if inebriated.

“Happy, sad, and angry all at the same time,” he said. “A very interesting drinking buddy.”

Pokemon Go street signs are popping up in Boston. (created by @twobj) pic.twitter.com/eMGaf8Cyhp

O’Brien Jones is only 23; the Arlington native graduated from Northeastern University in May with a degree in communications. He hopes to one day work for a large advertising firm, he said, and these signs are a good way to broaden his portfolio.

He doesn’t intend to sell them, but that doesn’t mean he’ll stop producing them. He said if someone asked him to make one for them, he’d happily oblige.

The response to his signs hasn’t been 100 percent positive, though.

“Some people think Pokemon Go has taken over the world a little too much,” O’Brien Jones said. He acknowledged it was a valid point.

Someone recently stole the sign that joked about Trump. O’Brien Jones hopes the “aspiring art thief” returns the sign, or puts it up in a different place around Boston.

“If you want I’ll make you one,” the designer wrote on Twitter, “don’t take them please.” 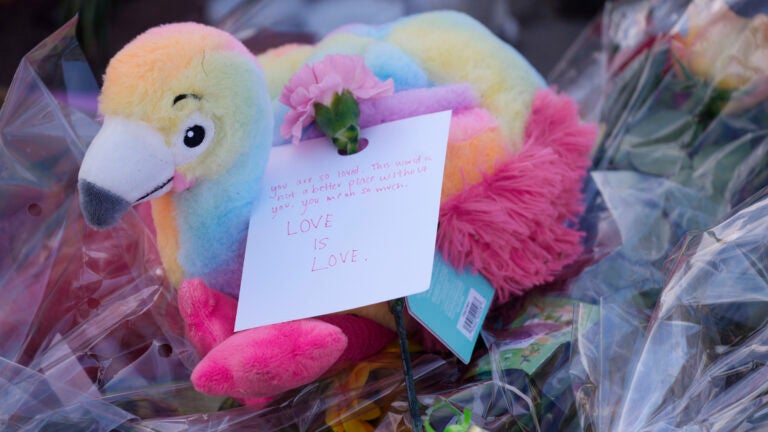 'You are loved': Doctor's message to LGBTQ+ community after Colorado shooting