As the hour of his death approached, the former NFL star chatted on the phone with his longtime fiancee, Shayanna Jenkins-Hernandez. Authorities say the pair stayed on the phone until the 8 p.m. lockdown at the maximum-security prison where he was serving a life sentence for murder.

Alone in his cell, the ex-New England Patriots tight end scribbled three notes. He laid them carefully next to a Bible.

Then he turned his bedsheet into a noose and hanged himself.

Those cryptic details emerged Thursday as authorities ruled Hernandez’s death a suicide and turned his body over to a funeral home so his family could lay him to rest.

Investigators wouldn’t say what Hernandez’s handwritten notes said. But they said they were satisfied he died at his own hand, and they said his brain would be donated to sports concussion researchers, ending a brief public dispute over its custody.

Authorities said the medical examiner had ruled Hernandez’s cause of death was asphyxia by hanging and investigators had found the notes and Bible in Hernandez’s cell at the Souza-Baranowski Correctional Center in Shirley. Authorities previously said Hernandez had not left a suicide note and he hadn’t been on suicide watch.

‘‘There were no signs of a struggle, and investigators determined that Mr. Hernandez was alone at the time of the hanging,’’ the Worcester County district attorney’s office said in a statement.

Hernandez had been locked into his cell at about 8 p.m. Wednesday, and no one entered the cell until a guard saw him just after 3 a.m. and forced his way in because cardboard had been jammed into the door track to impede entry, authorities said. Hernandez was found hanging from a bedsheet and was rushed to a hospital, where he was pronounced dead an hour later.

Earlier Thursday, Hernandez’s lawyer complained that state officials had turned over the 27-year-old’s body but not his brain.

Attorney Jose Baez said the family had arranged for researchers at Boston University’s Chronic Traumatic Encephalopathy Center to take custody of the brain. The center studies a progressive degenerative brain disease found in some athletes who have experienced repetitive brain trauma.

Hernandez’s body is at a Boston-area funeral home, but services for the Bristol, Connecticut, native likely will be held elsewhere.

Baden, who didn’t immediately comment, has performed autopsies in several high-profile cases, including the death of Michael Brown, a black teenager shot and killed by a white police officer in Ferguson, Missouri, in 2014.

Baez declined to say whether he or the family believed brain damage from Hernandez’s playing days led him to kill himself.

‘‘We’re not suggesting anything,’’ he said. ‘‘You go where the evidence takes you. We need to examine every aspect of this case.’’

Hernandez was diagnosed with only one concussion during his time with the Patriots, according to the injury reports teams file each week. He missed parts of practice during the week before the AFC championship following the 2011 season but played in the game, catching seven passes and running the ball three times in the Patriots’ 23-20 victory over Baltimore.

CTE has been linked to concussions and repeated blows to the head in athletes, members of the military and others who have experienced repeated head trauma. It can only be diagnosed posthumously. The Boston University CTE Center is one of the leading research efforts to diagnose and understand the disease, which can result in violent mood swings, memory loss and other cognitive difficulties.

It may never be clear why Hernandez would kill himself just days after he was cleared of two additional murder charges.

He had been serving a life sentence without parole for the 2013 slaying of a onetime friend, Odin Lloyd. But during his trial for the killings of two men in 2012, he appeared upbeat, backslapping his lawyers, letting out bellowing laughs and blowing kisses to his 4-year-old daughter and other family members in the audience.

The former University of Florida standout died five days after a jury acquitted him in those two deaths, which prosecutors alleged were precipitated by one of the men accidentally spilling a drink on Hernandez at a Boston nightclub.

His suicide left friends, family and his legal team in disbelief as many searched for an explanation to the tragic end of a young man whose football skills earned him a five-year, $40 million contract extension with the NFL’s top franchise.

What’s to become of Hernandez’s home and other assets is another unanswered question.

Attorneys for Lloyd’s mother have placed an attachment on the house as part of their civil lawsuit against Hernandez. The Internal Revenue Service has a $117,000 lien on the property.

‘‘I know if Aaron was here one more day he would have said he loves you,’’ he wrote. ‘‘Keep smiling because I know Aaron and Dad are both smiling down on you (and) us right now.’’

Visit Home of the Week: Down to the cabinets, Roslindale condo is true blue in devotion to hue 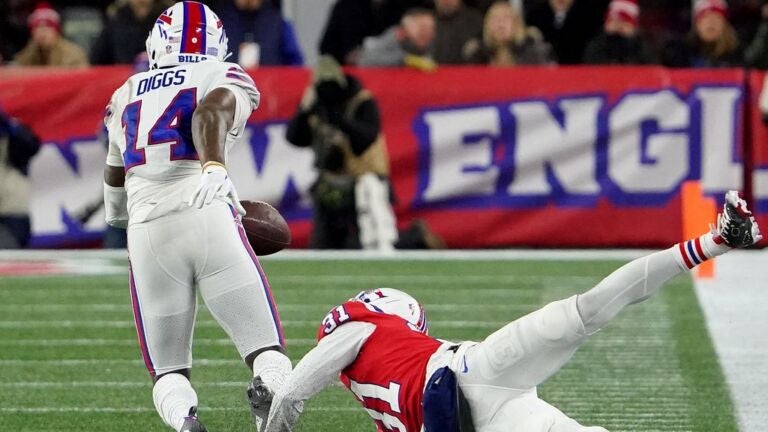 Football doesn’t seem that important this week, but stakes are there for Patriots and Bills