PROVIDENCE, R.I. (AP) — An elephant stretches its trunk through a window to soothe a sick child. A woman gives birth and three months later is back performing on the high wire. A handler of big cats weeps as the beasts lope out of the ring for the last time.

These stories could come only from circus performers, and in particular one famous circus, the one immortalized as “The Greatest Show on Earth”: the Ringling Bros. and Barnum & Bailey Circus, which is hanging its hat for the last time this weekend.

While the show goes on in other circuses around the world, Ringling is special. The size, the spectacle and the history — stretching back to P.T. Barnum and his traveling museum in the 1800s — set it apart.

One of Ringling’s two traveling circuses is scheduled to perform its final show Sunday in New York. The other closed this month, in Providence, Rhode Island, and with it, the end to a way of life few others have experienced. The Associated Press was allowed to observe it extensively.

Ringling is the last circus anywhere to travel by train, and while living on a train can be tough, the accommodations are considered a benefit that other circuses don’t offer. Perks include the “Pie Car,” the mile-long train’s dining operation, as well as a circus nursery and school for the many children whose parents make the circus what it is.

Some observations from the home the performers leave behind, from the unit’s last circus baptism, their final times goofing around on “Clown Alley,” and other moments the world will never see again: 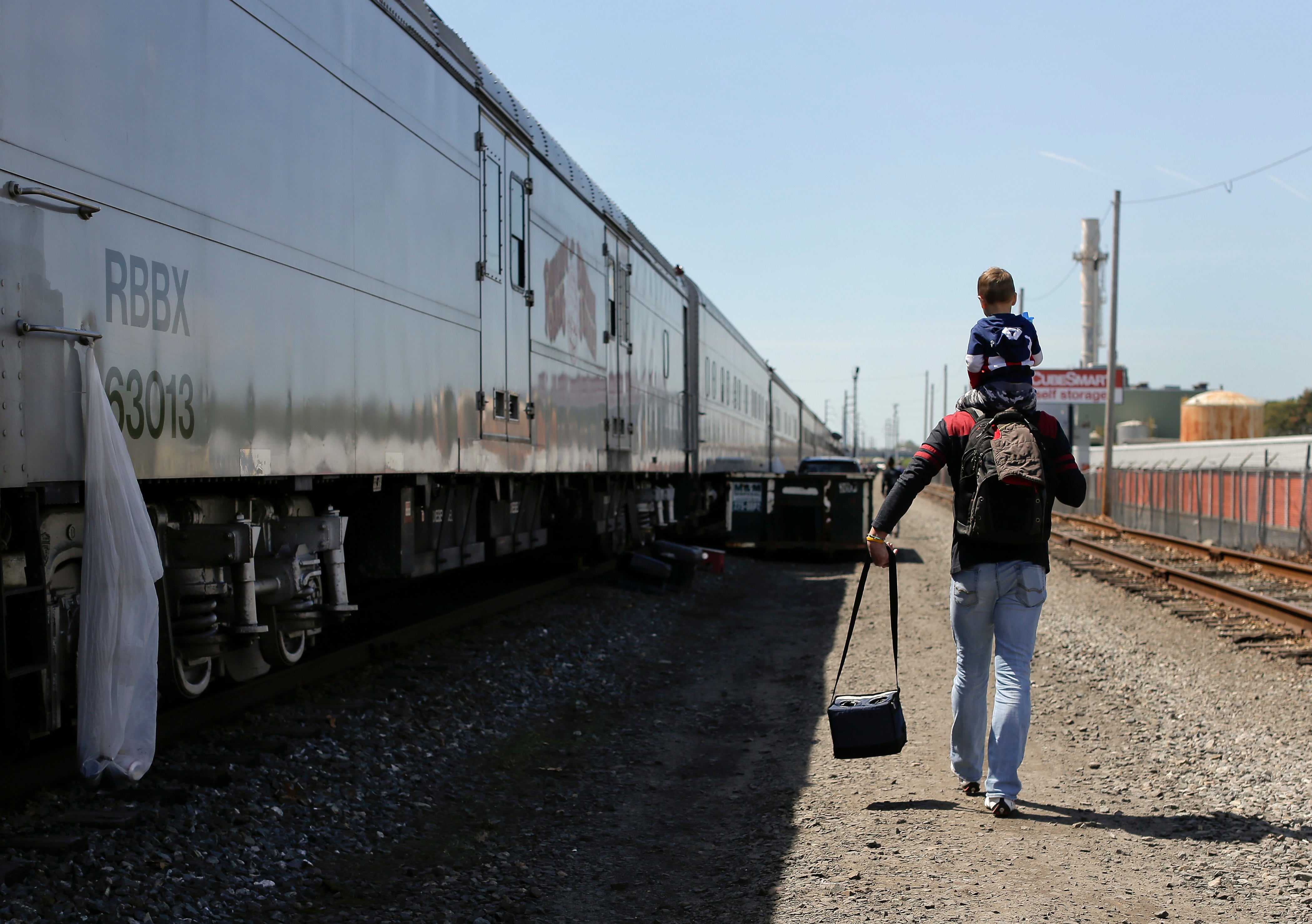 Ringling Bros. boss clown Sandor Eke carries his 2-year-old son, Michael, on his shoulders as he walks to the bus that will take them to the arena for a show.

One of Sandor Eke’s earliest memories is of an elephant comforting him, stretching its trunk through his trailer window, while he lay recovering from illness.

Eke’s Hungarian parents were performing at a circus in Sweden, and Eke was just a toddler. A few years later, he’d be a circus performer himself, and aspiring to come to America to join Ringling.

He got his wish 20 years ago, as an acrobat. Five years later, his colleagues told him he was funny and would make a good clown.

Now, at age 41, he’s the Boss Clown, leader of the clowns on the unit. He’s also dad to 2-year-old Michael, and they are enjoying the waning days here together.

Someday, he plans to teach his son juggling and other circus skills.

Even so, Eke knows Michael may never join the circus.

Eke’s wife, a former circus aerialist, has already established their new home in Las Vegas. When the circus closes, Eke hopes to get a job as a “flair” bartender there, doing tricks like juggling bottles.

He wonders how life will change.

Knowing it’s coming to an end has been difficult for his fellow performers and crew, and Eke been spending his time trying to make his circus family laugh.

Send out the clowns 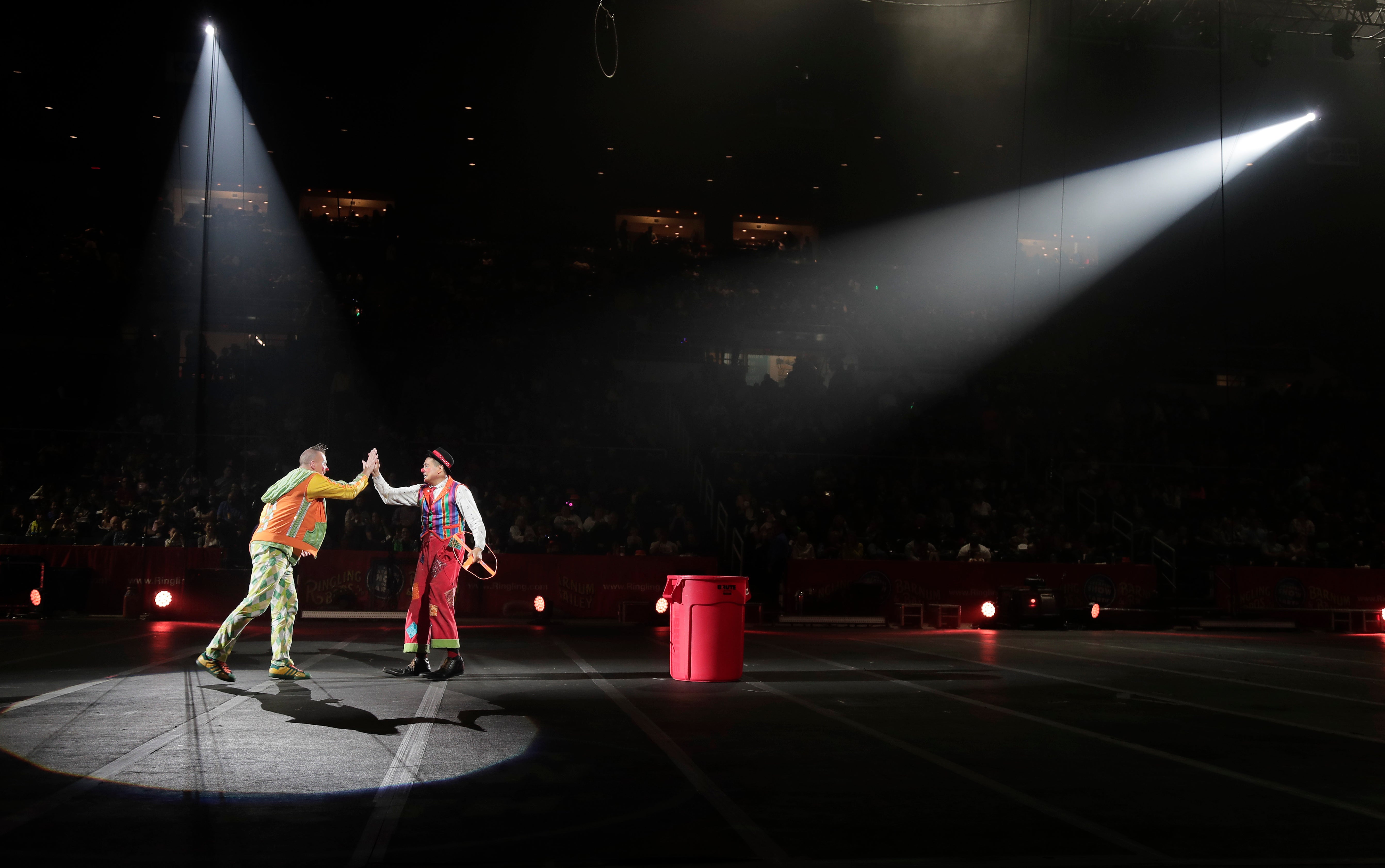 Ringling Bros. clowns Sandor Eke, left, and Ivan Skinfill perform during the intermission of a show.

Ivan Vargas likes to say his parents fell in love with the air.

He is sixth-generation circus. His mother performed on the high wire when they met, his father on the trapeze.

Vargas was born between two Ringling Bros. shows in Madison, Wisconsin, in 1990. His father managed to perform in the early show, then made it across the street to the hospital — in costume — for his son’s birth.

Vargas is part of Clown Alley. It’s not just a place. In one sense, it’s the private area backstage where clowns get ready to perform. But it’s also how the clowns refer to themselves, a mini-fraternity within the circus, and a microcosm of it.

There’s Brian Wright, a circus superfan, of sorts. He was 4 years old when he saw his first Ringling show, and he knew that’s what he wanted to do.

The Brooklyn, New York, native auditioned three times before finally landing a job as a clown. Now he keeps a book he likes to call the “Clown Bible,” which, after four years at Ringling, is now filled with memories, thoughts and jokes he collects when he meets a former clown.

And there are Nick Lambert and Stephen Craig, neither of whom gave a thought to joining the circus until they were out of college. They ended up here because of their love of acting.

Lambert has a plan for his last hours on the circus train, before he heads back to his hometown of Albion, Illinois.

The morning after the last performance, he’ll sit in his compartment on the train and open up a cabinet. There, clowns from years past have written their names, shows and years they performed with Ringling.

Restricted by the life 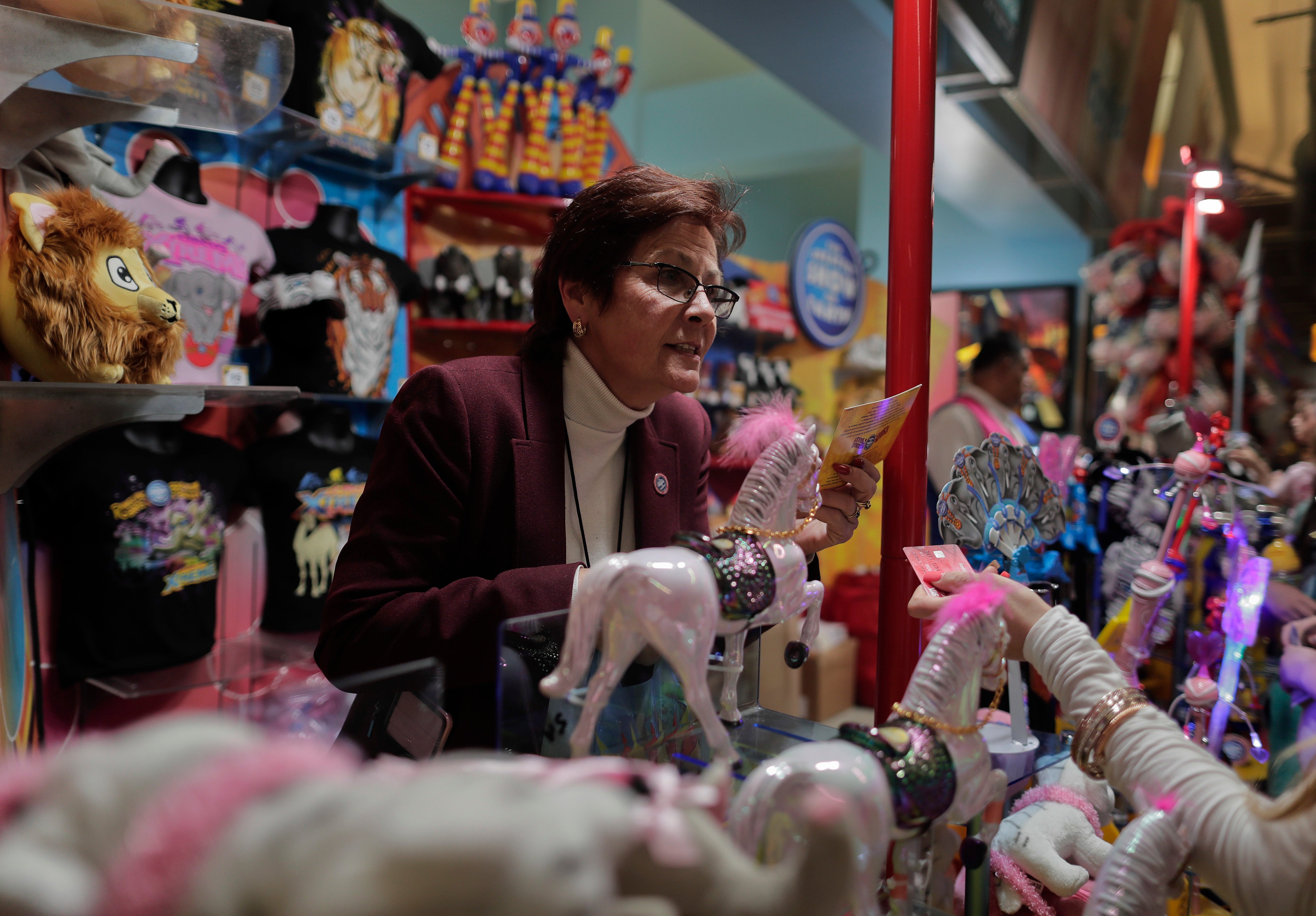 Concessions manager Jeannie Hamilton helps a customer at one of the many memorabilia booths after a show.

Quarters on the circus train can be tight. Some cabins are so small, you can touch opposite walls with outstretched arms. Many travelers are stuck in their rooms while the train is moving because the only exit is to the outside.

Take Jeannie Hamilton. She has been with the circus 12 years, most recently as manager of concessions.

While people talk about running away with the circus as a way to break free, Hamilton said she sometimes felt constrained — either stuck at the arena or stuck on the train.

The train moves much slower than an Amtrak, or even a Honda. Its final run traveled a circuitous route from Hartford, Connecticut, through Springfield and Worcester, Massachusetts, to Providence, Rhode Island.

The trip took half a day. By car, the 65-mile distance could be covered in less than two hours. The train cars are, for the most part, being sold, and many have already been auctioned.

So, Hamilton decided to spend that last trip soaking it all in.

“Anytime the train was moving, I was on the vestibule,” she said, referring to the small standing area between train cars. “Now that it’s coming to an end, I was trying to enjoy every minute of it.”

Hamilton would smile, wave and take pictures as she passed by people who had come out to say their final goodbyes to the Ringling train, yell “thank you” and applaud.

“Got a lump in my throat,” Hamilton says, “every time I saw them.” 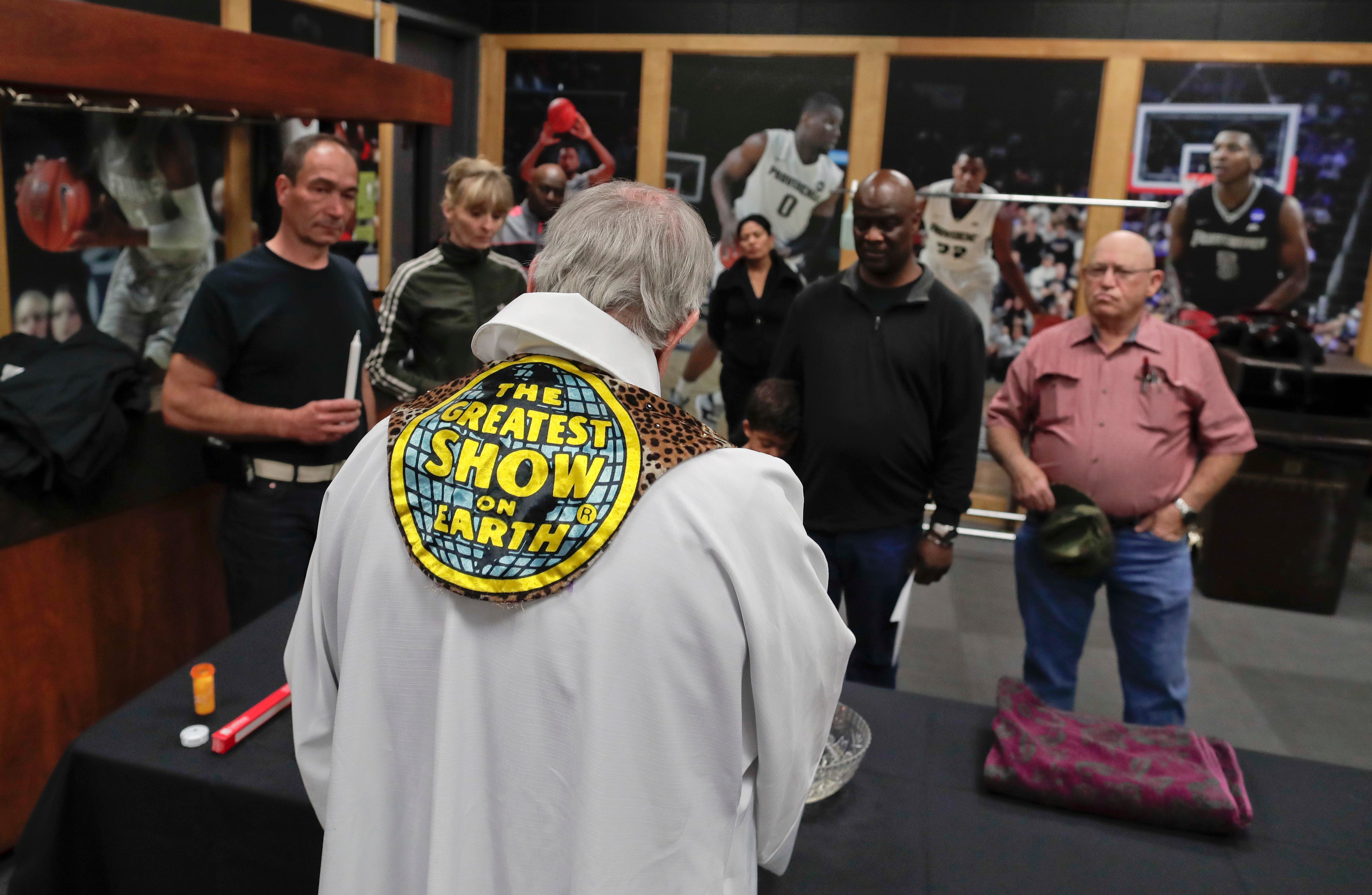 Rev. Jerry Hogan, of the U.S. Conference of Catholic Bishops’ Circus and Traveling Shows Ministry, leads a baptism service for the son of a member of the crew before a Ringling Bros. show.

Behind Clown Alley, in the depths of the arena, a small group of performers and crew hastily assembles for a baptism.

Six-year-old Eddie Strickland is led in by his father, Jimmie, who has been with the circus for 20-some years.

The Rev. Jerry Hogan, of the U.S. Conference of Catholic Bishops’ Circus and Traveling Shows Ministry, is ready in his vestments, made by the costume department from old elephant blankets and decorated with sequined clown faces, crosses and animal prints.

Heavy equipment rolls by, and people walk through on their way to the bathroom, some pausing for a bit to watch.

Father Jerry, as he is known, blesses water taken from the tap a few moments ago, then pours some on Eddie’s head.

“Eddie, you’re going to be famous. This is the last baptism celebration on Ringling’s show in 146 years,” he tells the boy.

Father Jerry has been a mainstay for the circus family, marrying many of them in happy times and ministering to them through tragedy.

“I just wanted it to be done by Father Jerry,” Strickland says. “I’ve known him for a long time, and I’m happy.”

Birth on a wire (or close to it) Mustafa Danguir is the first in his family to perform in the circus. His wife, Anna Lebedeva, originally from Moscow, is sixth-generation circus.

Being a circus performer takes commitment, discipline and athleticism, qualities Anna Lebedeva exhibits when she balances on the high wire with her husband, Mustafa Danguir.

She executes her tricks so effortlessly, it’s hard to believe she had a baby three months ago.

It was important to her to perform in Ringling Bros.’ last shows, she says, and she pushed herself to get back in condition after their son, Amir, was born.

“I’m really happy to have a chance to finish this. It’s been seven years for us,” she says. “This is just history, you know?”

Danguir is the first in his family to perform in the circus. He was discovered doing acrobatic tricks as a child in Tangier, Morocco, and invited to circus school. Lebedeva, originally from Moscow, is sixth-generation circus.

They married last year, 30 feet up on the high wire, while the show was in Houston.

Now, they’ll move back to Europe. Danguir will appear as a finalist Saturday on the TV show “Arabs Got Talent.”

The couple dreams of starting their own show, or maybe opening a circus school in Morocco to teach future generations. They’re optimistic something good will come along.

“We are artists,” Danguir says. “We are survivors.” 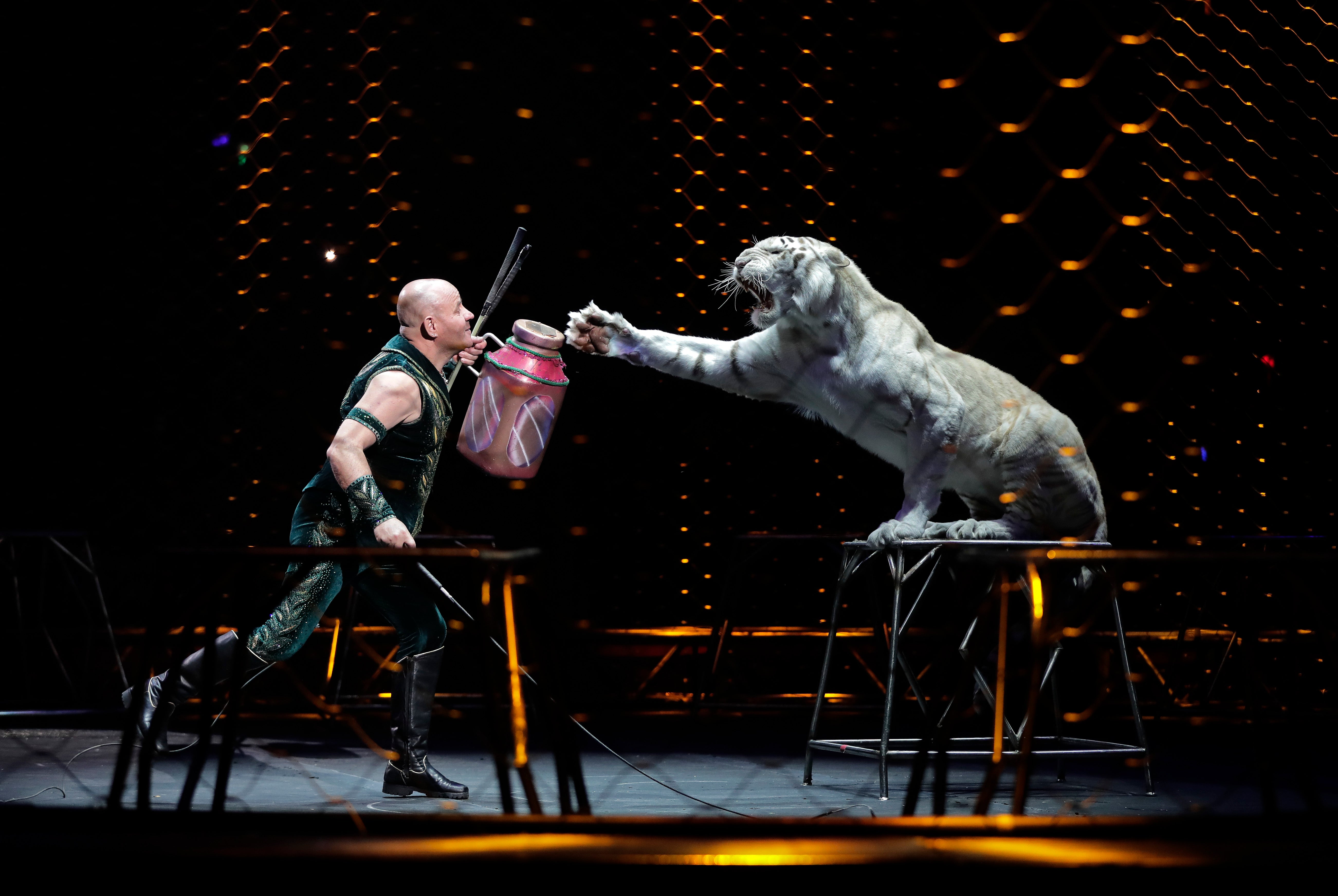 Ringling Bros. tiger trainer Taba Maluenda has been with some of the cats for 13 years, has raised them from cubs. But they’re owned by Feld Entertainment, which owns Ringling, and he has to say goodbye.

The tiger presenter weeps as he ends his act with the big cats.

The animals are owned by Feld Entertainment, which owns Ringling, and Tabayara Maluenda has to say goodbye.

The animals will be sent to a center that specializes in tigers, according to a Feld spokesman. Years of protests by animal rights groups are among the things that took their toll on the circus in recent years, along with declining attendance and changing public tastes.

As Maluenda wipes away tears during their last appearance together, he thanks each animal individually as it leaves the ring. One, he embraces and kisses — the first tiger Feld got for him when he joined Ringling 13 years ago, one he raised it from its days as a cub.

Finally, after the aerialists, strongmen, the human cannonball and the BMX bikes have all done their tricks, it’s over. The ringmaster calls out the families of the performers and crew to join them on the arena floor for a final thank-you.

Among them are “Boss Clown” Sandor Eke and his son.

In a few days, the two will fly back to Hungary to visit family before their permanent move to Las Vegas. Eke is planning to visit a circus he has heard about there.

But tonight, he stands on the arena floor one last time, holds his son in his arms, and cries. 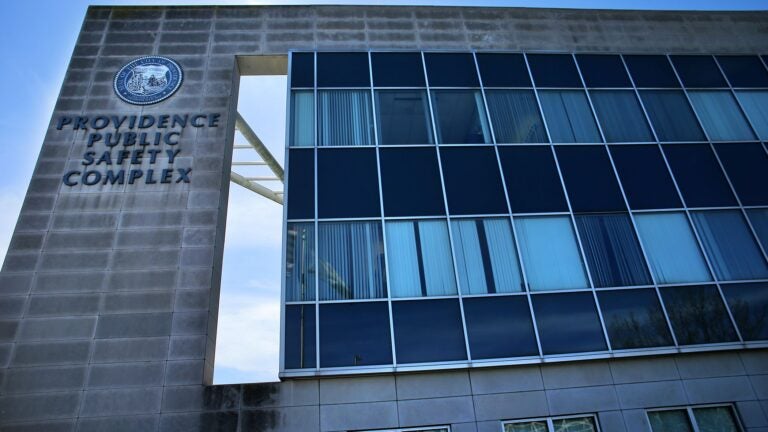