Before you head out to see 54 ships from around the world sail through Boston Harbor on Saturday, make a mental note: Leave your drones and pop-up tents at home. They won’t be allowed.

Sail Boston is a six-day celebration of Boston’s maritime history, but the main event will be the Grand Parade of Sail, starting at 9 a.m. Saturday. With road closings, scarce parking, and an expected 2 million people over the course of the event, things are bound to get hectic.

Here are key things to know in case you plan to attend — or want to avoid the whole scene.

All Sail Boston events are free and open to the public, and will go on rain or shine.

For more information about the event, visit sailboston.com.

Don’t drive — seriously. Governor Charlie Baker and Mayor Martin J. Walsh were the most prominent of the public officials who encouraged people to use public transportation at a press conference Wednesday.

For a list of closed streets and limited street access,including in the North End, Charlestown, and East Boston, refer to Sail Boston’s maps at www.sailboston.com/street-impact/.

The MBTA’s Red, Blue, Orange, Green, and Silver lines will run weekday service all weekend, as well as rush-hour service on Saturday — along with extra commuter rail service.

The MBTA will also provide a shuttle service from Saturday through Wednesday between Sullivan Square Station and the Charlestown Navy Yard. A second shuttle will link JFK/UMass Station and Castle Island.

Captain Richard Bailey looked over the ship Spirit of South Carolina while it was docked in Salem Harbor in Salem on Wednesday.

Where to watch
Advertisement:

Sail Boston has designated viewing areas along the harbor that will open at 7 a.m. These areas include Castle Island and Fan Pier in South Boston, Christopher Columbus Park near downtown Boston, Langone Park in the North End, the Charlestown Navy Yard piers, and Piers Park in East Boston. The maps at www.sailboston.com/street-impact/ show these and other areas. Sail Boston has been designated one of the highest security risks in the country this year, on par with the Super Bowl — not because of any specific threats, but because of the event’s complexities.

Boston Police Commissioner William B. Evans said visitors will be electronically wanded and have their bags searched before reaching harborfront viewing areas. Undercover officers will circulate among the crowds and are trained to identify the characteristics of someone who might be carrying a bomb, Evans said.

After the ships parade through the harbor, they’ll be anchored and open for the public to board. There will be stadium-style security screenings to gain access, and crew members will be on board.

Deckhand Tripp Seaman worked on the Spirit of South Carolina.

What to leave, what to bring

Add coolers on wheels, large backpacks and bags, firearms, and canopies to the list of things that won’t be allowed. Also leave behind cans, glass containers, pre-mixed or alcoholic beverages, wagons, pull carts, grills, and bicycles.

Here’s what you can bring, so long as you’re not ferrying them around in a wagon or cart: small purses and bags that are easily searchable, single-handle coolers, folding or beach chairs, umbrellas (it’s looking like there might be rain), baby strollers, diaper bags, glass baby bottles, and blankets or tarps no larger than 10 feet by 10 feet. Selfie sticks are encouraged. The Fame, left, sailed towards the Pride of Baltimore II in the Salem Harbor in Salem Wednesday.

What about my boat?

If you bring your boat into the harbor, it must be anchored in a designated spot by 8:30 a.m. Saturday, the Coast Guard says.

The recreational anchoring areas include space near Logan Airport, in the Outer Harbor, and off Deer Island. 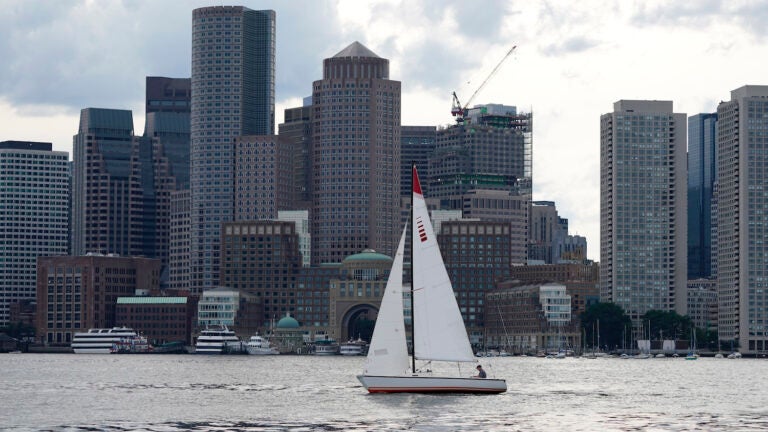